Property Stories The Untold Mystery Of The Luxury Condo That Was Never Built In Singapore: The Ferrari-Themed Ferra In Orchard 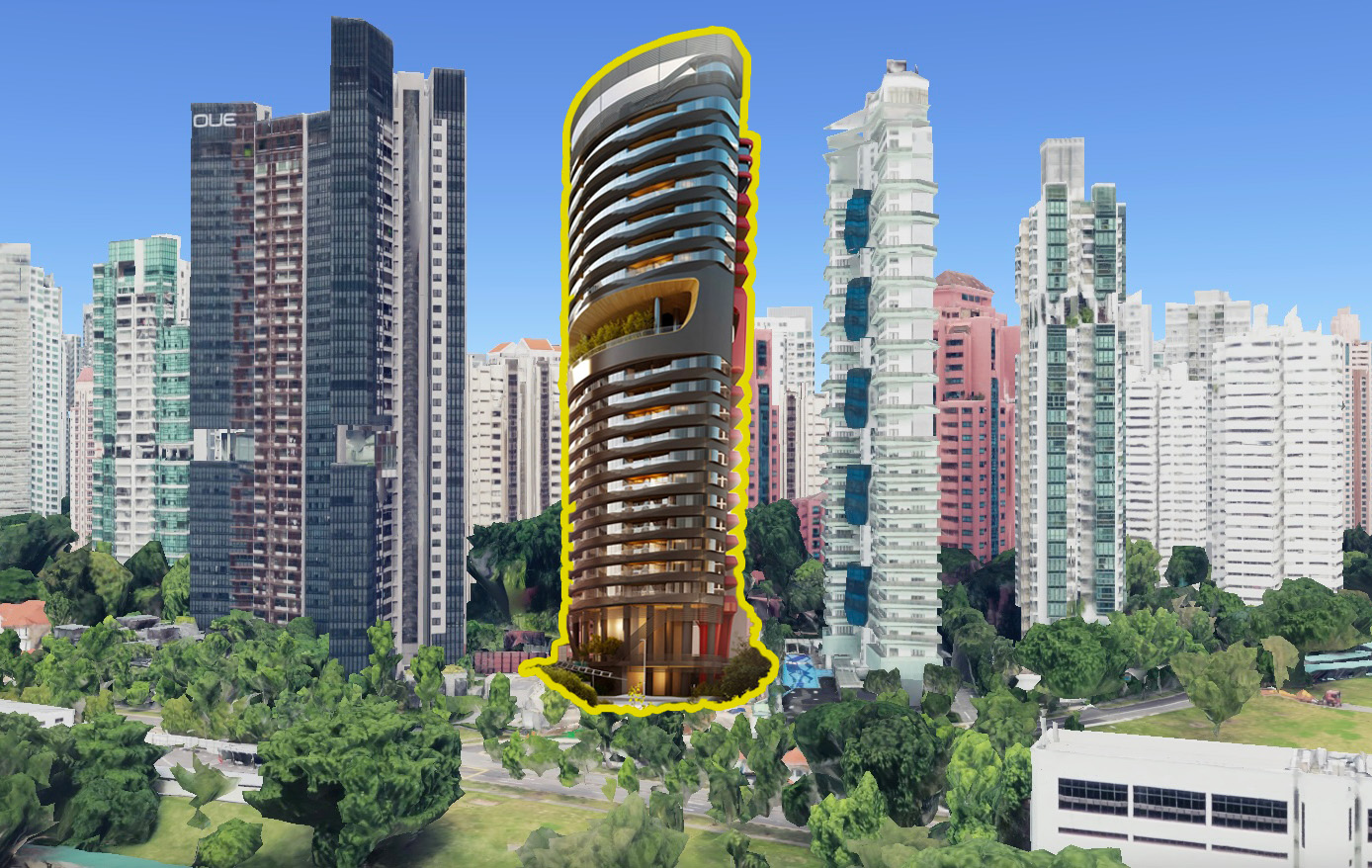 Singapore’s property development scene has a nearly 100 per cent rate of successfully completed projects. It’s a rare occasion when a developer can’t follow through, or willingly abandons a project midway (and perhaps even more so when it’s with one of the largest developers in Singapore). This makes the mystery of Ferra an enticing one: a high-end, central region condo with ties to legendary Italian car designer Pininfarina no less; and a condo that, despite having recorded transactions, was never built. Look up Ferra on Google and you’ll see that most property portal sites classify it as completed in 2017, but visit the actual site and you’ll see that the gaping hole between The Lumos and OUE Twin Peaks still remains:

Ferra was an interesting collaboration between Far East Organization, and Pininfarina (Pininfarina designs many products from travel coaches to airlines, but they’re best known for designing cars for Ferrari, Maserati, Alfa Romeo etc.) This was back in 2013, the last peak of the property market.

The two organisations were supposed to build a sports-car-themed residential tower called Ferra. To use their own description:

“The uniqueness of Ferra’s identity finds its origins in aesthetic elements coming from the Pinafarina car design heritage that, reinterpreted, represent a breakthrough in the architectural language.”

On the surface, it was easy to see why this collaboration would have been a success. Pininfarina was the one designing every Ferrari car from the 1950s until 2013, and supercar enthusiasts would seemingly be drawn to such branding.

While the land on which Ferra would be built was freehold, Far East made the project a 103-year leasehold property (it is permissible for owners of freehold land to lease it for 99 years, 103 years, etc). They’ve done this a couple of times already, with projects like The Scotts Tower, and Parksuites).

Surprisingly, the website for Ferra is still up and running, so you can have a look at it here.

Ferra sported novel concepts, that could have been the first in the market

Apart from the unique red-and-black aesthetic (one side is dark, and the other side is entirely red), which would have stood out against the more traditional white facades of Leonie Hill condos, Ferra was… well, different.

The project would feature unique tracks leading to the car park, described as “arcing and twisting trellis tracks” which would weave over pools and curve around the towers. The car park even had a unique lighting system to mimic car showrooms and put your vehicle in the best light.

Interior-wise, there was an option for high-end Gaggenau kitchen fittings, from ovens to wine chillers. The project promised the use of wood and leather like what you’d expect from the interior of high-end cars.

There was also a pool on the 14th floor sky garden, which would have looked out over the Orchard area (but we don’t know if this was or would have stayed unimpeded, given subsequent developments within Leonie Hill).

We think the layout of the units would have been controversial – there’s a distinct curve to the walls, as opposed to the squarish or rectangular 90-degree angles that homeowners tend to prefer. But there was flexibility, as the developer used a semi-white plan, and buyers could customise how they wanted the walls and partitions to be placed. Pinafarina also designed a set of themes they could have chosen from.

Sadly, we’ll never be able to do an in-depth Ferra review, since all of this was never built.

How would Ferra have fared in today’s market?

Despite Ferra never being built, transactions were lodged and units were sold. The following can be seen on Square Foot Research:

While we didn’t see other transactions lodged, old reports from The Business Times say that 30 units were launched in the first phase and that seven of these units were bought; but some appear to have been returned later (see below).

We made a comparison to some other similar properties in the same area, and here’s what we found:

Since then, most of the buyers there have faced quite heavy losses.

This is what the prices for Lumos looked like (which faced its own issues as well, bulk sales because of poor sales, turned into co-living, etc).

Here’s what the current prices are now:

Look how much prices have dropped since its launch. But does this suggest problems with the location? We look to the newest condo in the immediate area (besides Irwell Hill Residences), New Futura to see how it has fared:

While there have been few resale transactions so far, they’ve all been profitable (and quite mightily so). Perhaps this boils down to the size of the units (typical buyers in this segment would prefer larger units), and the overall feel of the project itself – which is hard to quantify.

There is also the question of timing. To be fair though, 2013 was the peak of the property market, and subsequent cooling measures would have significantly dragged down the price. We can see that ultra-luxury properties close by such as New Futura, which was launched later, but at a similar price point – have performed much better since.

In any case, perhaps the buyers of Ferra may have dodged a bullet, by not buying such a luxury property just before the coming market downturn.

From what we understand, buyers were all refunded, and the developer has other plans for the site (probably serviced apartments). But as to why this happened, well, here are some of the reasons that we can think of.

Lack of financing is almost certainly not the issue, as the Far East is one of the biggest developers, and is well-capitalised.

The most probable reason is that the developer was unhappy with the launch show, with only seven of the 30 units being picked up; and then apparently two being returned afterwards. We found an old report saying that:

To be clear, high-quantum, luxury units are always expected to move more slowly; but even then, it’s worrying when five out of 30 sell at launch, and little else is heard afterwards.

In our experience, new launch condos will keep appearing in various mentions and reports, over the course of their sales (e.g., top sellers of the month, the highest transaction for the month, and so forth). There is an almost complete absence of mention for Ferra, suggesting sales had flatlined after launch.

Realtors we spoke to speculated that a softening rental market, which began in 2013, could have affected demand.

One realtor, who specialises in District 9, speculates that the composition of small units in Ferra would mean it was catered to investors in the form of landlords, and not home buyers. He says that, by around 2013, the trend of buying small units to rent (the shoebox craze) was already dying down. This could have made Ferra less appealing.

Finally, there’s the “small” matter of construction costs to think about. Construction costs have always been a sticky point in Singapore, and it probably didn’t help that Ferra would have cost a bomb to construct. With the interplay of red and black on the outside, steel exterior, and lighting systems to mimic car showrooms – the costs combined with the tepid sales were the more likely reasons for such a project to not materialise.

While we’ll probably never get an official answer, Ferra did promise something novel at the time. We hope it’s just a matter of timing, rather than a sign that market realities disincentivise innovation. If developers interpret it as the latter, we shouldn’t be surprised that so many condos are “cookie-cutter” replicas of one another.

To be updated on both obscure phenomena and big trends in the Singapore private property market, follow us on Stacked. We do deep dives and thorough reviews of both new and resale properties alike.