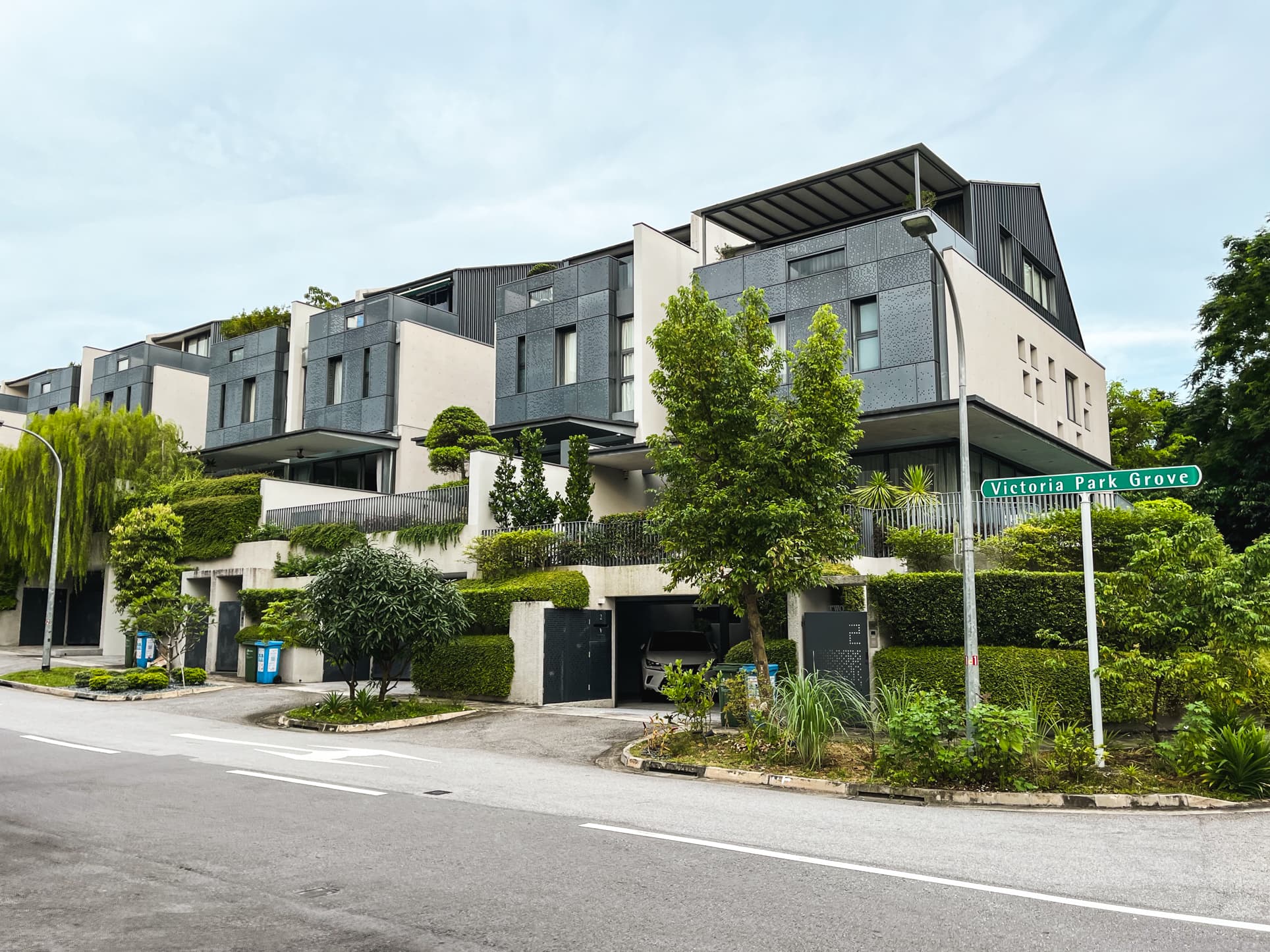 A 99-year leasehold development by CapitaLand, Victoria Park Villas is one of the younger leasehold landed enclaves around. It TOP-ed in Dec 2018 with a lease starting from September 2013 (i.e. no lease decay worries for a good while) and consists of 109 houses on elevated land: 100 garden villas (semi-Ds), 6 pool villas (larger semi-Ds), and 3 detached houses.
They’re spread over a sizeable 403,012 sq ft piece of land located at the junction of Coronation Road and Victoria Park Road, have their own sizeable estate playground and outdoor fitness corner, and are within 1 km of 2 popular Primary Schools (Nanyang Primary and Raffles Girls Primary School.)

Thanks to its desirable location in a GCB area in District 10 as well as its fresh lease, prices at Victoria Park Villas are not low as some may expect. According to the CEO of CapitaLand, Wen Khai Meng, it was “the only prime landed residential site to be awarded under the Government Land Sales program since 1996” (at the time of its launch), so definitely somewhat of a rarity. The smaller garden semi-Ds are currently listing for $5.5 million, with the last 3 transacted prices also $5 million or over at the time of writing. (There is a listing for $5 million but, according to the agent, this has sold.)

Note: the 1996 GLS was for Kingsville, another leasehold development just a stone’s throw from Victoria Park Villas, where current houses are listing for $3.8 million and above.

There is even a detached house asking for $23 million! Now, I’m of the “freehold-isn’t-everything-and-it’s-worth-it-to-buy-leasehold-if-you-can-get-a-better-quality-of-life” mindset but must confess to being pretty curious to see if this property will sell and, if so, who ends up buying it. (According to this article in the Straits Times, the detached houses were sold at $11-12 million at launch, with “star buy” semi-Ds starting from $3.85 million.)

A number of different architects worked on this project: Mok Wei Wei of W Architects was the Master planner, but the houses were designed by AR43, HYLA, and Studio Wills+Architects. Despite the various architects, the houses at Victoria Park Villas have an extremely cohesive look. If you’re someone who gets annoyed when all the houses on a street look different and have varying heights, Victoria Park Villas is something for you to consider, as the houses all look remarkably similar (except for 1 of the detached ones.) In fact, they blend together so well, that the photos in this article may look all look the same to you at a quick glance – spotting the differences would be something like the “Where’s Wally” game we used to play as children.

I must say that the tour of Victoria Park Villas was one of the most enjoyable in my leasehold landed series so far. For those who are looking for a landed home, it’s not just about the plot of land it’s sitting on, but the surroundings play a huge part as well. So what’s great here is that the area is spacious with nice wide roads and the houses have so much greenery, the area feels extremely lush and peaceful. (Note: the houses were designed as per LTA’s new requirements for wider roads of 15.4m in housing estates.) 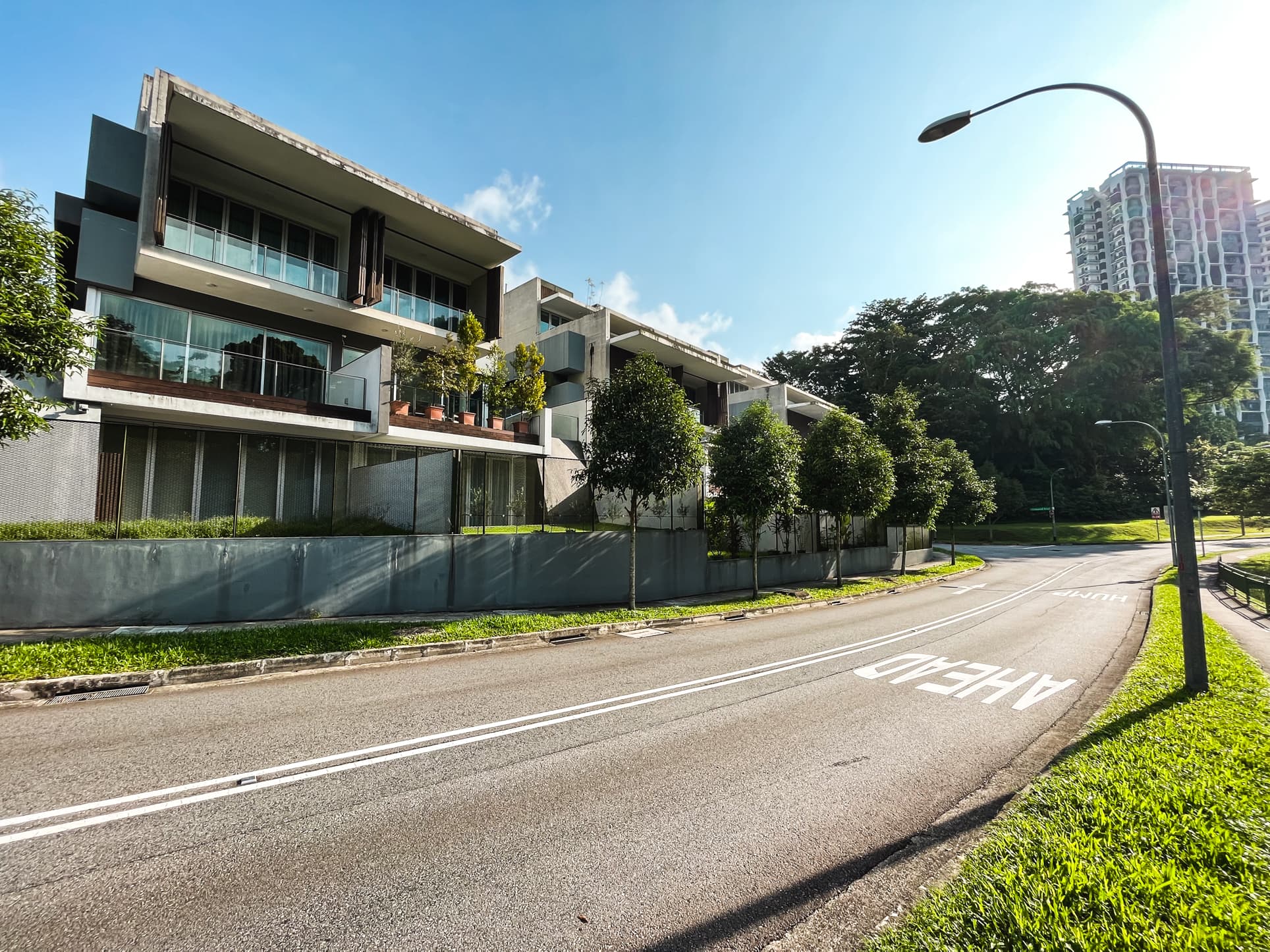 As I walked around the estate, I could see pretty birds (not the usual sparrow or mynahs) nesting in the planter boxes outside some of the houses, and it felt like I had been transported to a serene Australian or European suburb, instead of busy and noisy Singapore. Looking around, there was not a tall building in sight, which helped to add to the out-of-Singapore atmosphere. Apart from a few sounds floating out from some of the houses (of cooking or people talking), you don’t hear any traffic noise, and the overall vibe was one of tranquility.

1 reason the estate feels extra spacious is because the houses all have very generous front lawns. You can view a video captured by drone here, although note that this was taken whilst the houses were still being constructed, so it doesn’t convey how green the area is now. I personally love outdoor space, and I appreciate how these front yards are elevated (above the car porch) which makes them breezier and more private than the typical garden in Singapore.

Unfortunately, the extra outdoor space comes at a cost. The usable internal space of the house is, in my opinion, small and the rooms feel cramped. Despite this being a landed house, they feel smaller than some apartments, particularly the older resale condos. Perhaps I have a pre-conceived notion that the rooms should be large as this is a house in the prestigious D10 district, but I’ve seen several terrace houses with smaller land sizes and yet bigger rooms. (1,900 sq ft vs the 2,200+ sq ft of the semi-Ds here, with the same number of bedrooms.)

Although there are 4 floors, bear in mind that one is a basement and another an attic – both of which aren’t very desirable to work in during the day. Attic rooms are notoriously hot and the houses at Victoria Park Villas don’t appear to have any passive cooling features to help mitigate this. (I may be wrong about this as I’m not a trained architect, just a layman who’s been reading up on passive cooling.) So I could see the attic room functioning as a bedroom but not really as a study or work from home area, unless you don’t mind having the AC on 24/7.

As for the basement, although it has small motorised windows, it’s still quite dark (and I imagine not very windy.) I can see it being a good storeroom or entertainment room, maybe a movie room or a bar perhaps, but certainly not a very pleasant Work From Home office, unless you are someone who doesn’t enjoy the sunlight. There’s also been a bedroom and bathroom planned as a Granny room in the basement, which is good forward planning for ageing Singapore, but I’m not sure many Grannies (especially those who can afford to live in D10) would enjoy living in a dark basement. (There is a lift in the house though, so Granny can have her room upstairs, and doesn’t necessarily have to be consigned to the basement.)

Much as this area is praised for its accessibility, that is only true for Victoria Park Villas if you have a car. In fact, whenever I mention the area to people, their first response is usually “It’s very deep in.” Whilst the enclave is between 2 MRT stations, it is a 20-21 minutes walk out to either (Tan Kah Kee or Farrer Road MRT. Presumably it’s about the same distance to the bus stop, as you have to walk out to the main road for bus access.) The nearest shops and restaurants would be at Coronation Plaza (which has an NTUC Finest) and Empress Market, which is a 17-20 minutes walk away.

After raising all the above points, it may seem like I’m not a fan of the development. I actually find it a terrific estate to live in. I certainly wouldn’t mind living there if I could afford it, provided one has a smaller family, enjoys outdoor living, and doesn’t mind smaller inside spaces. (Or families trying to get their kids into Nanyang or Raffles Primary!)

For those with a smaller budget and who don’t need to stay in Central Singapore, join me again next week as we venture out to more leasehold landed developments that are easier on one’s pocket!