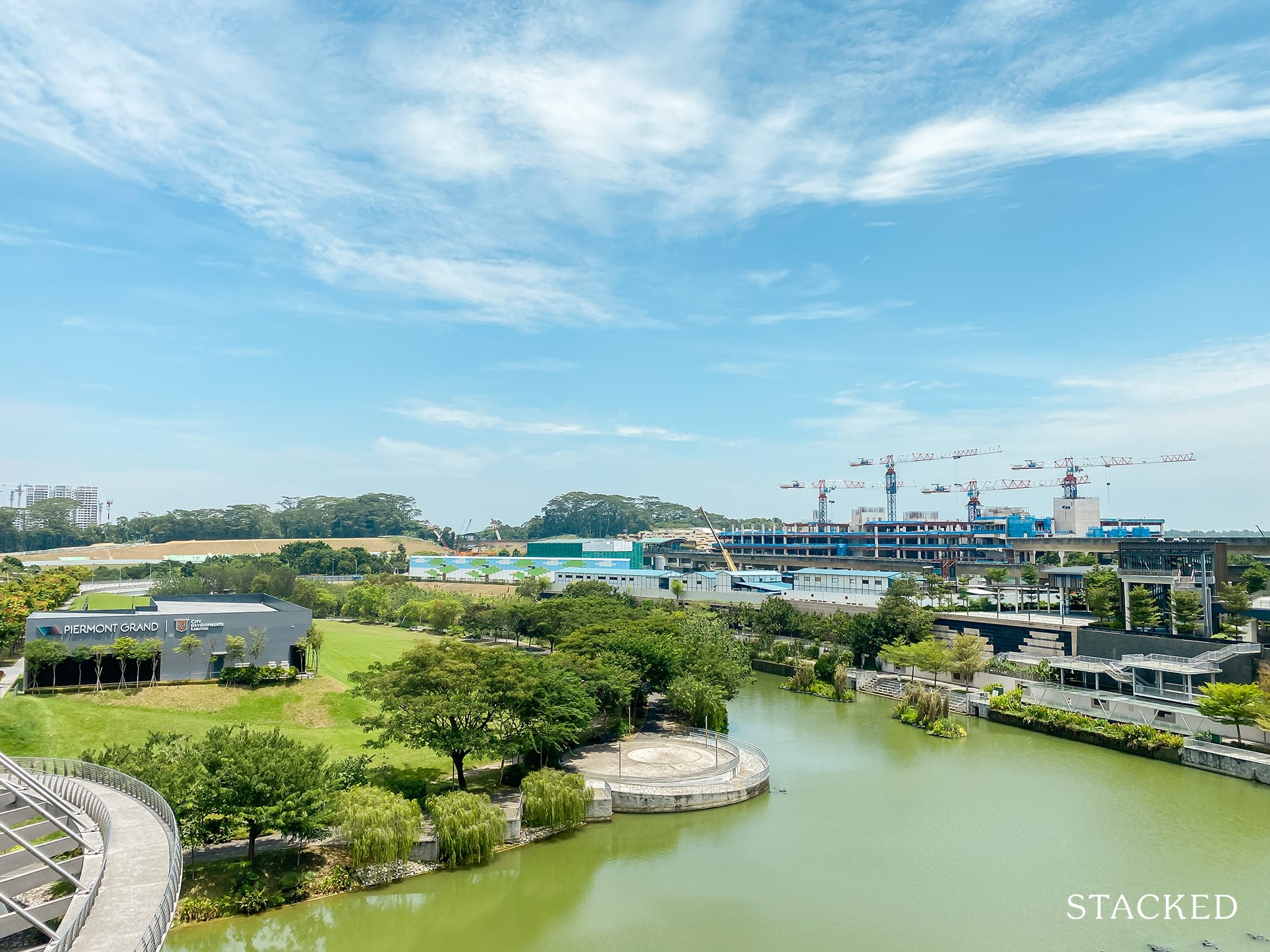 Watertown: both a shopping paradise and a scenic view at your doorstep

When you speak of waterfront condos in Punggol, the 1st to come to mind is usually the 992 unit Watertown as it’s located above the 4-storey mall Punggol Waterway Point, Punggol’s largest source of commercial entertainment (230 retail units including a supermarket, restaurants, and a cinema). Built in 2017, Watertown’s 99-year lease commenced in 2011. Oh, and did I mention that it’s right next to Punggol MRT?

If you’re familiar with the transacted prices of this development, you’re probably scoffing right now. With an asking PSF of $1,382 – $1,770 at the time of writing, Watertown is 1 of Punggol’s most expensive condos (if not, the most expensive condo in Punggol) so hardly a shoo-in for this article. However, bear in mind that Watertown is an integrated development: convenience always comes at a price, so it wouldn’t be fair to compare Watertown prices to that of a regular condo. Instead, it would make more sense to compare it with other integrated developments.

As a point of reference, Midtown Residences, which is also in D19, a 7-minute walk to Hougang MRT, with no waterfront views/access and only 2 commercial levels (51 retail units + 55 restaurants and cafes) is currently asking for a PSF of $1,222 – $1,726 psf – not much cheaper from Watertown! Our Watertown review has also helpfully included a table collating the average transacted PSFs of nearby integrated developments, so do check it out.

Some plus points to highlight about Watertown include: 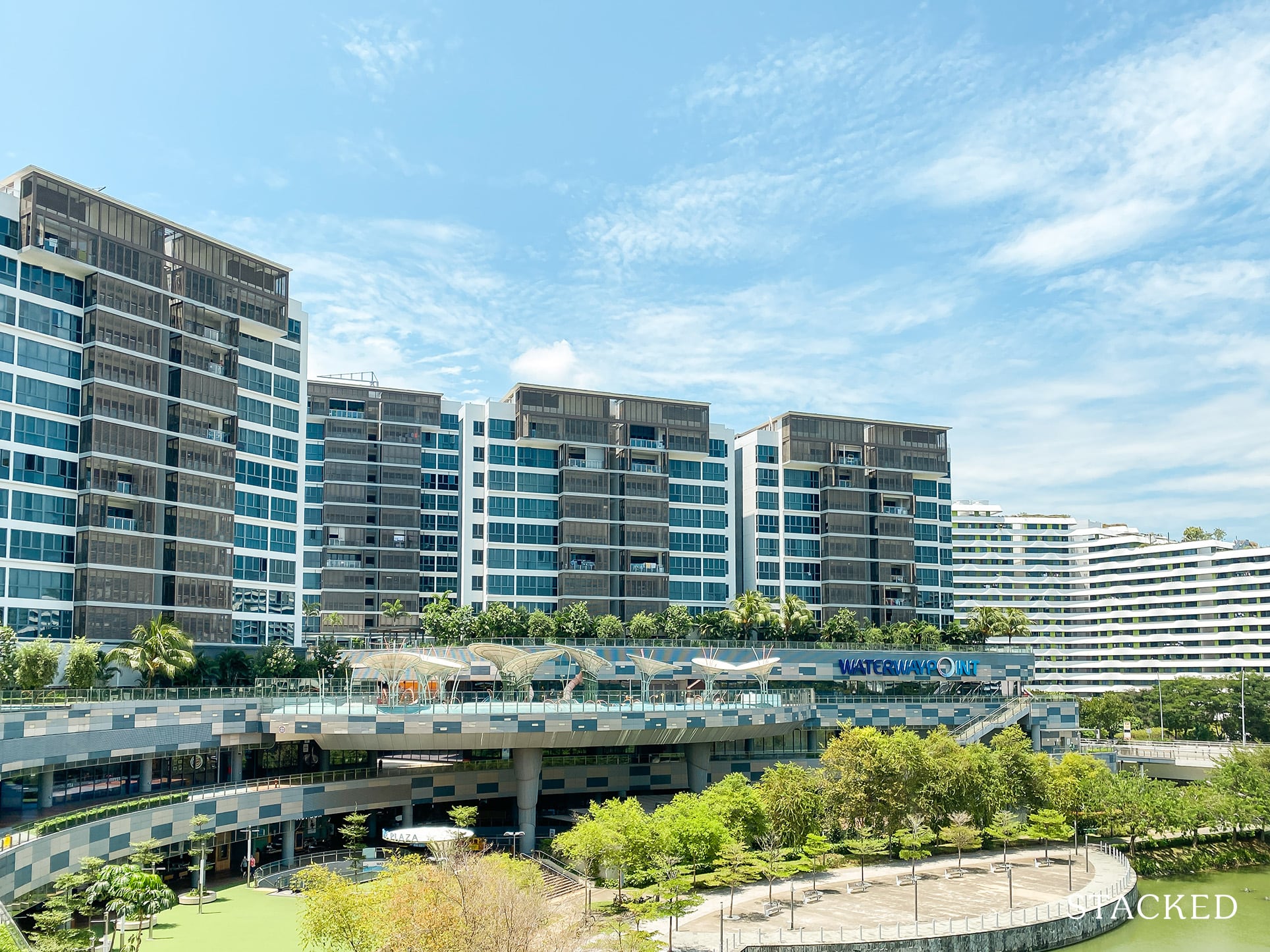 There are quite a number of water facing condos here, such as:

1. Heron Bay (covered in my previous article on ECs so not discussed in this piece. However, it’s worth mentioning that Heron Bay is 1 of the few low-density condos along the Punggol waterfront, with under 400 units. In comparison, Kingsford Waterbay has 1,165 units!)

2. Kingsford Waterbay (not included in this piece as its lowest asking PSF of $1,182 is more than Heron Bay’s highest asking PSF ($1,152), so it’s not exactly a prime candidate for an article on affordable waterfront housing! However, if you’re looking for a strata home by the river that you can move into now, it’d be something to consider.)

The current water views along Sungei Serangoon are fairly picturesque, for Singapore, thanks to the verdant expanse of greenery on the opposite bank. However, none of the forests is protected – in fact, part of the area opposite has been demarcated as a light industrial zone zone – so the view will, sadly, change over time. Like the Waterfront series condos along Bedok Reservoir, the developments here are separated from Sungei Serangoon by only a small road, so it’s pretty tranquil, in terms of road noise.

On the flip side, Punggol does have a bad reputation for being directly under the flight path of RSAF fighter jets, thanks to the nearby Paya Lebar airbase, so that’s something to bear in mind before moving here! (FYI, according to Channel News Asia, “a typical air force take-off cycle may take up to 15 minutes, involving anywhere from two to eight aircraft, with one taking off every two to three minutes“ so the noise isn’t insignificant.)

Completed in 2004 (lease starting from 2001), this 716-unit, 17-storey development has a current asking PSF ranging from $833 – $1,043. Although not as near to the shops (or MRT) as Watertown, it does boast a minimart on its grounds. Moreover, the developer has thoughtfully slanted some blocks (relative to the waterfront) so you can find water-facing units which are North-South facing. (North-South is the general preferred facing in Singapore as it doesn’t suffer from the morning or afternoon sun. Facing analysis can get quite technical- the sun/ wind direction can change depending on the time of the year- if you want all the nitty gritty which is too mind-boggling for me, do check this out.)

Fun fact: the penthouses here come in single-loading fashion as well as in duplex form. Fortunately for duplex lovers like myself, all the river-fronting penthouses are duplex in fashion – they’ve been conveniently marked on the site map below.

As one of the oldest waterfront condos in the area (it was completed in 1999/2000 (depending on whether you refer to the condo website or PG), with its lease starting in 1995), Evergreen Park is also 1 of the most affordable in this area, with an asking PSF of $805 – $938 at the time of writing. Like Heron Bay, it’s fairly low-density, with 394 units, spread over 18 floors. There’s a lovely video on YouTube showing the beautiful scenery around the condo which offers a glimpse of the lifestyle you could have if you live here, so do have a watch.

However, 2 small things to note with this condo are that:

You might find the above points too trivial to mention but after some bad property experiences – I almost made a 20% loss on my London flat when I tried to sell it after moving back to Singapore (I’ll be sharing the lessons I’ve learned about the London property market from this mistake in a later article) – I like to take every possible point into consideration before making any permanent decisions now!

Before I sign off, I’d like to mention that there is also Rivercove Residences in Seng Kang, an EC which TOP-ed in 2020 (asking PSF $844 – $1,195) and for which the developer still has some units on hand. If you’re fortunate enough to make the cut for the government’s stringent EC criteria and want a waterfront lifestyle, it could be worth looking at. (They’re not resale units so I’m not going into more detail here.)

See you again next week, where we’ll look at another selection of waterfront condos in a different area!

Any recommendations for freehold condos with sea, lake, water or river views?