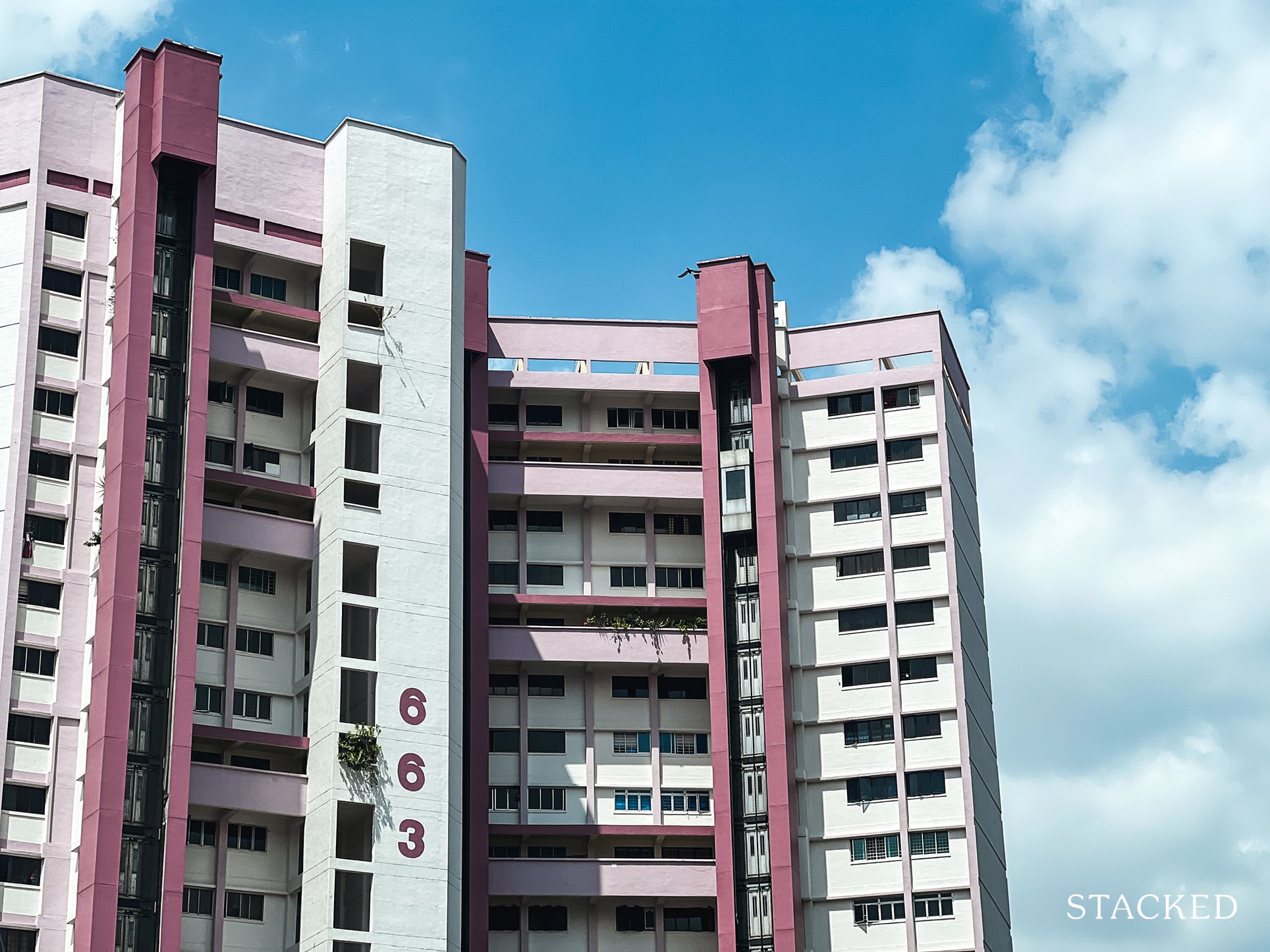 Singapore’s approach to public housing is different from many other countries, and we’re not just referring to its policies. Although it may seem that every HDB block looks the same, our HDB projects are not as “cookie-cutter” as you’d expect from mass-housing projects; and many blocks exhibit unique quirks you won’t find elsewhere. Here are some of the more unusual HDB features we’ve found around Singapore:

1. 5-room flats that have been divided into smaller flats
Most people have heard of jumbo flats, which are two flats joined into a single unit. But did you know the reverse has also been done?

This happened during a period in the early 2000s when Singapore saw an oversupply of 5-room flats. In fact, this was when the Built To Order or BTO scheme was devised, to prevent a similar oversupply in future (although today in 2022, some home buyers might argue that the scheme was a little too successful in reducing supply…)

HDB needed a way to move all the extra 5-room flats, so the decision was made to split them into pairs of smaller flats.

Here’s another example found in blocks 89,90, and 91 in Tanglin Halt (these have since gone under the SERS scheme):

2. The Clover @ Kebun Bahru are the only circular HDB flats

The Clover @ Kebun Bahru (Block 259 Ang Mo Kio Avenue 2) are the first and only time HDB ever built circular flats. It consists of 96 units, all 5-room flats, arranged with four units per floor; there are 25 floors in total.

Due to the unusual architecture, bedrooms in every unit face the north or south, while living rooms and kitchens face the east or west. This helps the flats to stay cool throughout the day.

When it was completed in 1981, the flats at Clover were considered unusually expensive (the launch price was upward of $110,000, which according to the MAS Inflation Calculator would only be upward of $210,600 today – so we don’t know why they were complaining so much )

Most of the first residents were resettled Singaporeans, from Hougang, Potong Pasir, and Kampung San Theng. Reviews were generally mixed, with some feeling it was impractical – there were higher costs incurred in the renovation, as more customisation was needed to accommodate the curved walls. Most interior designers and renovation companies haven’t dealt with circular interiors (either back then or today), so this can still be a bit of a challenge.

Nonetheless, this is one of the most sought-after resale projects today; thanks to its uniqueness and – you guessed it – unit size.

Clover is the result of HDB constantly introducing change. In the 1970s, HDB sought to break up the monotonous nature of public housing architecture and to make each new town look a bit different. They launched a contest for new architectural ideas, of which Clover was one of the winners.

Clover may have influenced some of the flats along Aljunied and Zion Road.

At some point, someone decided that buildings protruding out from their base or “hanging” in mid-air were a cool thing (partly due to technological advances that made these possible and practical).

We suppose HDB got caught up in the magic of it too, at some point. Here are some “hanging” units with unique layouts, at blocks 473 to 484 Segar Road

Note that the master bedroom is on an overhang.

4. Landed HDB homes
There are, in fact, landed HDB properties. One of these made the news last year when it sold for a record $1.258 million.

These terraced units are found in Queenstown (84 units) and Whampoa (around 200 units). They weren’t technically built by HDB – they were built by HDB’s predecessor, the Singapore Improvement Trust (SIT). These homes were completed way back in the 1950’s, and HDB “inherited” them from SIT when it took over in the ‘60s.

Here’s what the layout of the units looks like:

There is one drawback though: the terrace houses are right up against the road, so you don’t really have a driveway to park in. The ones at Whampoa, for example, share a common HDB-run parking space (but some units are further from the carpark than others).

In Pasir Ris, there’s an especially interesting unit that comes with sky terraces. Have a look at the layout:

The living room, dining room, and kitchen are on the first floor and feature a service balcony and open terrace. One bedroom is also on the first floor, and there’s a small storage space under the stairs.
The second floor has two bedrooms and two toilets, although the layout is flexible enough to convert the open space into another bedroom (or a nice and airy study, TV room, or play area).

Okay, so this doesn’t affect the layout of your unit at all – but you may find it interesting to live in a block with bubble lifts. These allow you to see outside the development as they go up and down, and provide a great view (or a massive panic attack, if you have a fear of heights – face the doors!)

The most recent of these were installed at Block 46 Owen Road at Farrer Park, back in 2009. But there are examples of these in Little India, Jurong West, and Aljunied as well.

For more interesting HDB flat news, as well as insights on homeownership in Singapore, follow us on Stacked Homes. We’ll provide you with the latest news and updates as they come.