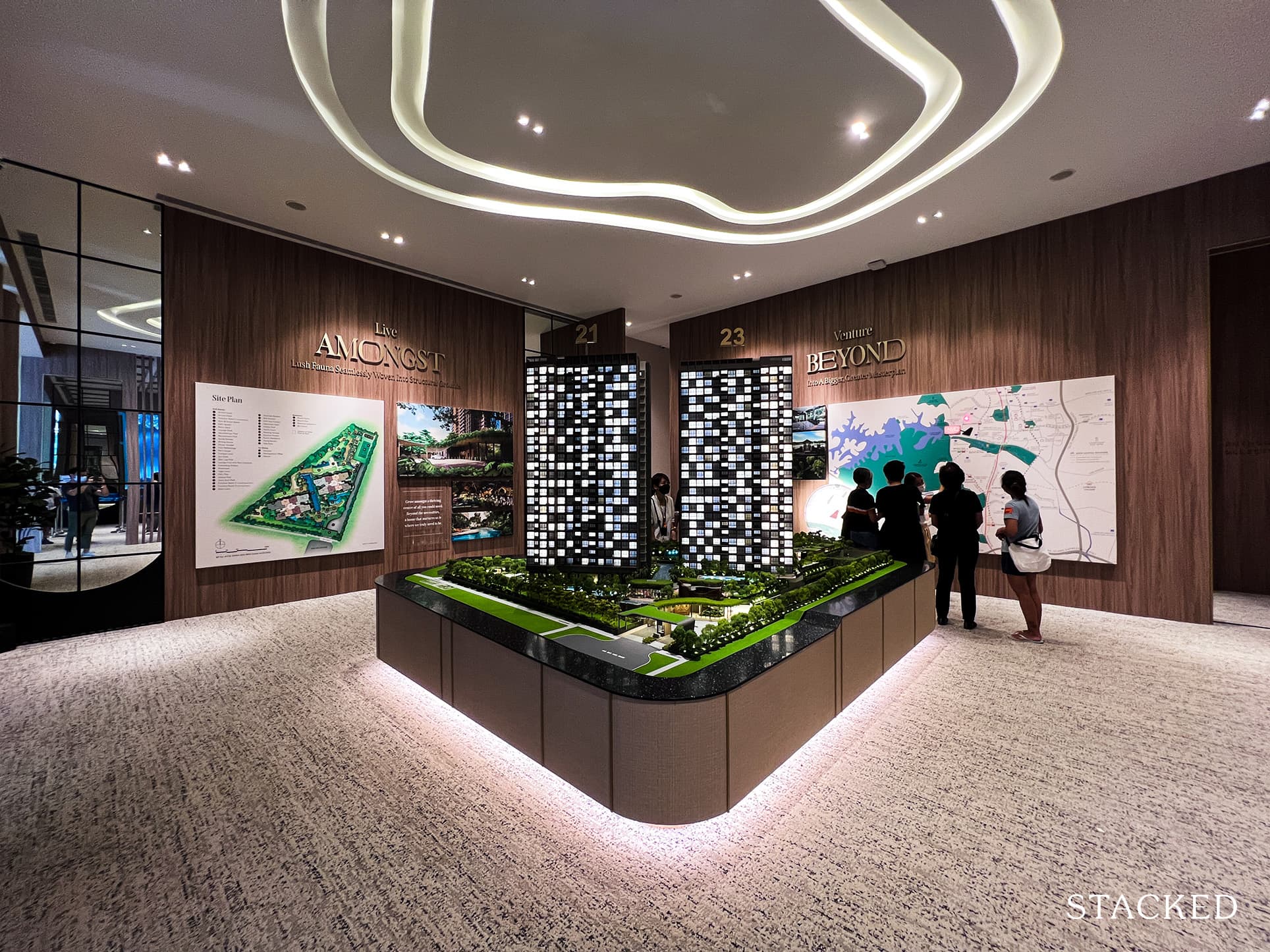 You may have noticed last June was a quiet month on the property front. Indeed, that month saw the lowest sales volume of private homes this year. Less than 500 new units were sold, and almost all the activity was in resale markets. That looks set to recover sharply this month, however; and part of the recent is the surge of strong new offerings coming on the market. Here’s what to look out for:

Developers reported 488* new units were sold in June 2022, excluding Executive Condominiums. This was down from 1,355* units the month prior; this is a decrease of around 64 per cent. This is the lowest sales volume for new homes in around two years.

There was, however, no pause to rising prices. Square Foot Research shows that new home prices averaged $2,395 psf in June, up from $2,275 psf the month before. This is a roughly 24 per cent increase in new home prices, since June 2021.

The reason for the steep drop in private home sales was, quite simply, the absence of new launches. There were zero new offerings for the month. Realtors also told us that, quite possibly, developers didn’t want a launch so close to the seventh month – a time when property sales are traditionally slow.

(The next month, however, AMO Residence launched on the seventh month and still managed to sell out 98 per cent of its units; thus showing a good location will always trump seasonal issues).

The other reason for holding off launches is the school holiday season. Some realtors said they expected more families would go abroad this year, after losing the opportunity during the height of Covid.

Square Foot Research indicates new home sales of 840 units as of last month, although a good part of this is due to the AMO Residence (see the link above). However, word on the ground is that 2022 will be much more modest than in recent years.

One realtor noted that, unlike 2020 and 2021, this year will see no mega-projects. Developments like Normanton Park (1,862 units) and Treasure at Tampines (2,203 units) have already sold out their massive inventories, and nothing at present will match them for volume. That said, there is the possibility of the launch of Dunman Residences, a 1,040-unit development that will be built on the Dunman GLS site. 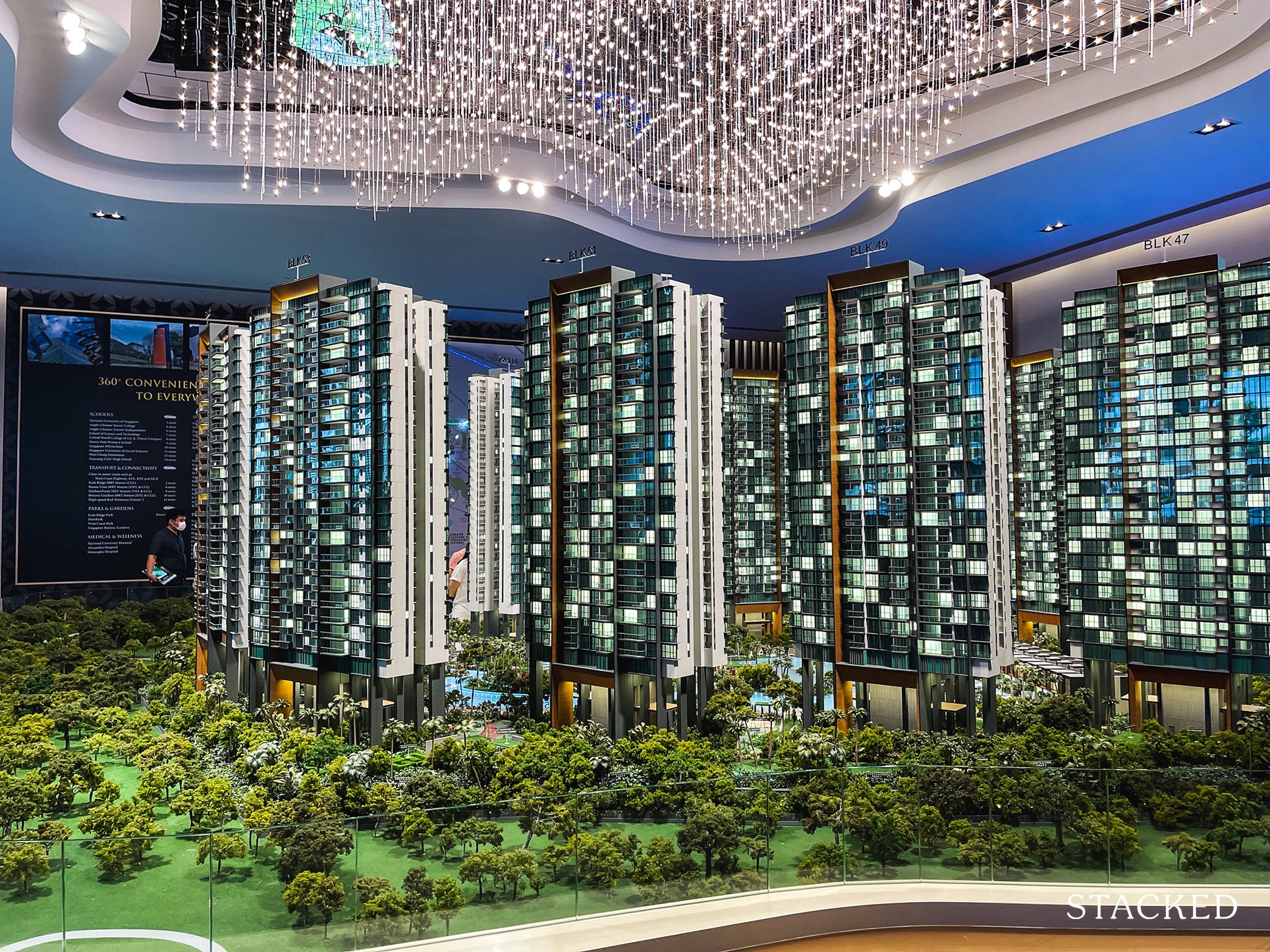 One thing is for certain: there are significantly fewer new launches in 2022, compared to the two previous years.

What are some new launches to look out for?

These are the expected new launches coming up in 2022/23:

So far, four of these locations stand out to us:

Chinatown Plaza went en bloc for $260 million, or at a land rate of $1,915 per square foot per plot ratio (psf ppr). This, along with the nearby Maxwell House site (see below) will likely be one of the hottest central region launches this year. Given the location, most people assume this to be a 99-year leasehold plot, but it is actually a rare freehold one.

The location along Craig Road is one of the best we’ve seen so far: the redevelopment will be around 300 metres from Maxwell MRT (Thomson – East Coast Line). Or if you’re willing to walk just a bit further (350 metres), you’ll be at Outram Park MRT. This is a major nexus point with three lines: the East-West Line, North-East Line, and Thomson-East Coast Line.

This should be walking distance of about six and eight minutes, respectively. Note that Outram Park is just three MRT stops to City Hall.

The redevelopment will also be around 610 metres from the heart of Chinatown (around People’s Park Complex), which provides a lot of retail and dining options.

Maxwell House was sold for $276.8 million, above the $268 million asking price, but lower than the price of $295 million in September 2020. This redevelopment is just around a five-minute walk from the Chinatown Plaza plot. It’s also even closer (220 metres) to Maxwell MRT, and about 320 metres to Tanjong Pagar MRT (East-West Line). A key difference is that it has access to the Downtown Line at Telok Ayer MRT, at around a 540-metre walk.

This redevelopment may be better, if you want to be closer to Tanjong Pagar than to Outram.

Peace Centre (also Peace Mansions) has been around since the ‘70s, and it’s amazing what’s sprung up around it. This development is now at the point where Little India connects to Sophia Road – and you can easily walk to Tekka Market in less than five minutes. It was finally sold for $650 million in December 2021, at a land rate of S$1,426 per square foot per plot ratio (psf ppr), after including an estimated lease top-up premium. This was after multiple attempts since 2007.

If you head in the other direction, you’ll be at Plaza Singapura – and the attached Dhoby Ghaut MRT station (North-South Line, Downtown Line, Circle Line), in under 10 minutes. Alternatively, Bencoolen MRT (Downtown Line) is just 280 metres away.

This area is also close to the arts district of Bras Basah, so SOTA, NAFA, and LaSalle are both within walking distance.

Walk a little further up the road (about 12 minutes or so), and you’ll be at Bugis Junction, with the attached Bugis MRT station.

Peace Centre is just four minutes walk from Sohia Regency, another redevelopment on the list. Locational advantages should be similar.

With fewer launches and land-starved developers, there may still be hope for en-bloc sales this year

On the ground, many realtors have pointed out that developers are eager to tap into a still-strong demand; the problem is the still low number of GLS sales. This may push developers into seeking en-bloc deals from existing projects.

One realtor commented that, at the start of the year, developers were still cautious due to the December cooling measures (the last round of measures raised the ABSD for developers). There was also uncertainty going to 2022, following the Russia-Ukraine conflict; at the time developers were worried construction costs would rise, on the back of an energy crisis.

However, they have seen more inquiries and interest in en-bloc sales, as the still-rising prices have given developers confidence. Recent successful launches, such as AMO Residences, may also have assuaged some worries.

Certainly, developments in 2022 will face less intense competition than in the past two to three years.

For more on the situation as it develops, follow us on Stacked. We also provide in-depth reviews of new and resale condos alike, so you can make a well-informed property decision.

Isn’t the former Chinatown Plaza now a hotel? Nearly done by the way.