Property Stories Touring Pasir Ris By The Sea “Freehold” Condos For Under $2 Million (And Above 2,000 Sq ft!) 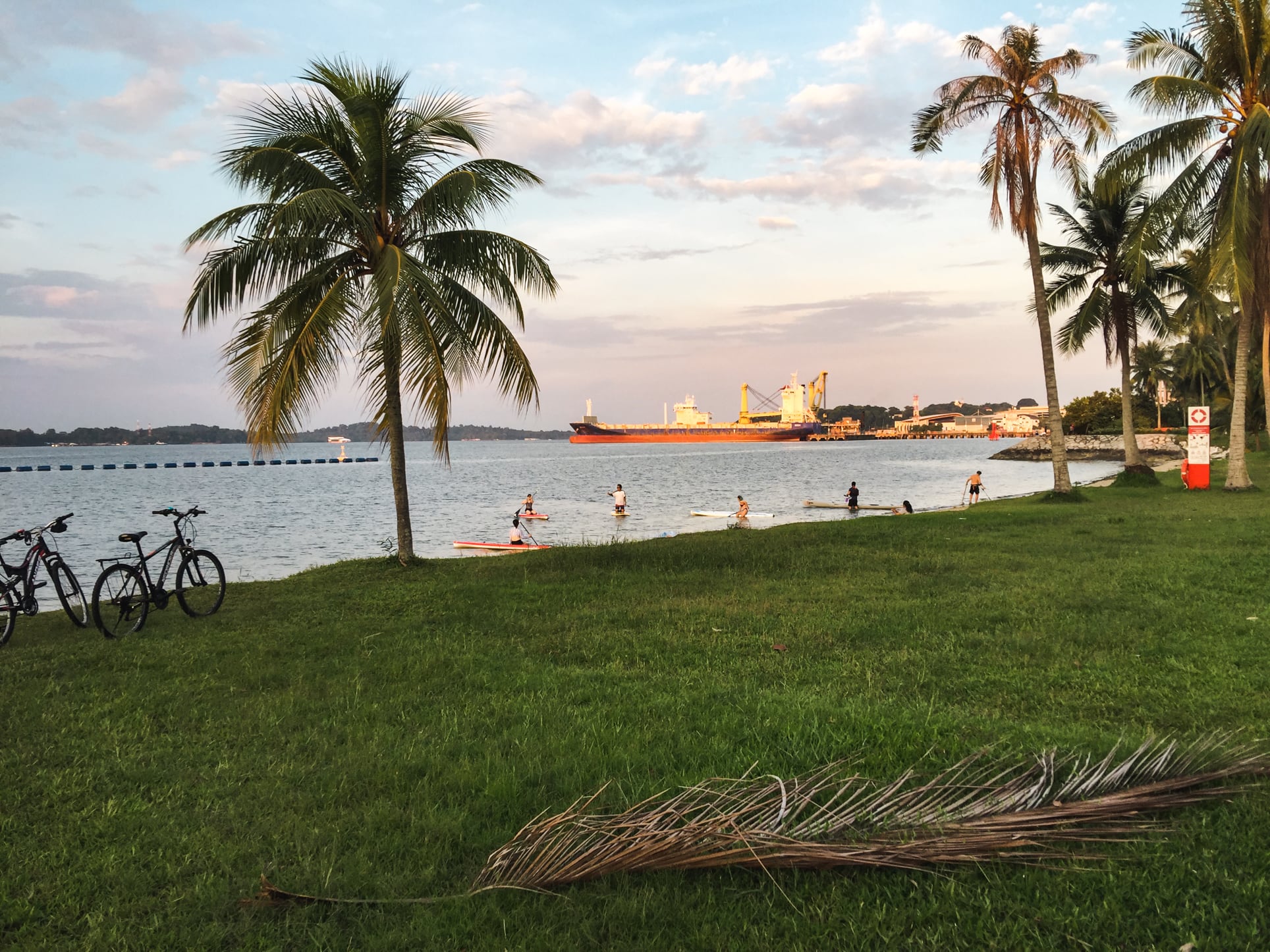 A while back, I wrote about freehold waterfront condos at Balestier (most waterfront properties in Singapore are 99-years leasehold in nature). The feedback from my Mom, who grew up in the area, was: “What river? It’s a big drain!” (Fact check: that is an actual river in Balestier, it just looks like a canal, as many rivers in Singapore do.) Hence, this week, I thought I’d take you back to Pasir Ris to view the seafront 946 and 999 years leasehold (essentially freehold) condos there, where no one can take issue with the appearance of the waterfront!

Everyone knows that living in Pasir Ris means that you’re very close to the beach, but did you know that there are actually condos built right along the beach, from which you can enjoy a good view of the sea? In my other life as a food blogger, I follow an Instagram account called @ourresalepenthouse – the owners of this beautiful home moved to Pasir Ris mid-COVID and the amazing photos they’ve shared of the views from their master bedroom and balcony are what piqued my interest in this area. (Coincidentally, they were one of the first few houses featured on Stacked with their previous lovely Peranakan home!).

I wish I woke up to this view every morning!

A few weeks back, I took a tour of the landed properties by Pasir Ris Beach, where you can still find landed homes for under $2.9 million. The part we’re looking at today (mainly the Jalan Loyang Besar stretch of condos) is just a stone’s throw away but feels more serene, despite the presence of some ships at the Eastern end of Pasir Ris beach. This could be due to the fact that the condos which line Jalan Loyang Besar, the closest road parallel to Pasir Ris Beach, are mainly low-rise condos (the plot ratio is 1.4). There is also a church and a pre-school but the area is generally less bustling than Pasir Ris Park Area 3 and I much prefer this stretch of Pasir Ris Beach.

There is a public car park in between the condos and the beach, so the sea-fronting units here will have marvellous unblocked views. Look at just how much empty space is in front of the condos!

Turning in the opposite direction, this is the view from the same spot looking in the direction of the beach (which is hidden by the green fencing and cars).

One drawback of the type of boutique condos that can be found along Jalan Loyang Besar is the lack of facilities. However, with the options you have at Pasir Ris Beach, this won’t be a problem for residents. Right in front of the car park is this outdoor gym:

If you need more than this, walk over to Pasir Ris Area 3 where there are much more extensive facilities, such as courts.

On the right of the outdoor gym is a lovely tree-lined promenade (shown above) and BBQ pits right in front of the sea.

If you walk further East, there is Ohana Beach House where you can have drinks and snacks, as well as rent Watersports equipment.

You also get some chickens (like I had seen at Pasir Ris Beach Area 3) but nowhere as many. I definitely didn’t see any near the condos, nor as noisy, so sleeping in may not be an issue here. (I went both at 7 am and at 5 pm to check the surroundings at different times of the day.) Not sure about you, but I’m a real bear if my beauty rest is disturbed.

There is a Campsite in this part of the beach though, so I wondered if it could get pretty lively during non-COVID times? I reached out to a couple of residents of the Jalan Loyang Besar condos on Instagram, and they kindly replied saying that the neighbourhood is generally very quiet and tranquil. You may hear the occasional plane, but you get used to it. (Indeed, when I was taking my tour of the neighbourhood, a plane did fly overhead but it took me a few minutes before I realised it and my hearing is pretty sharp.) 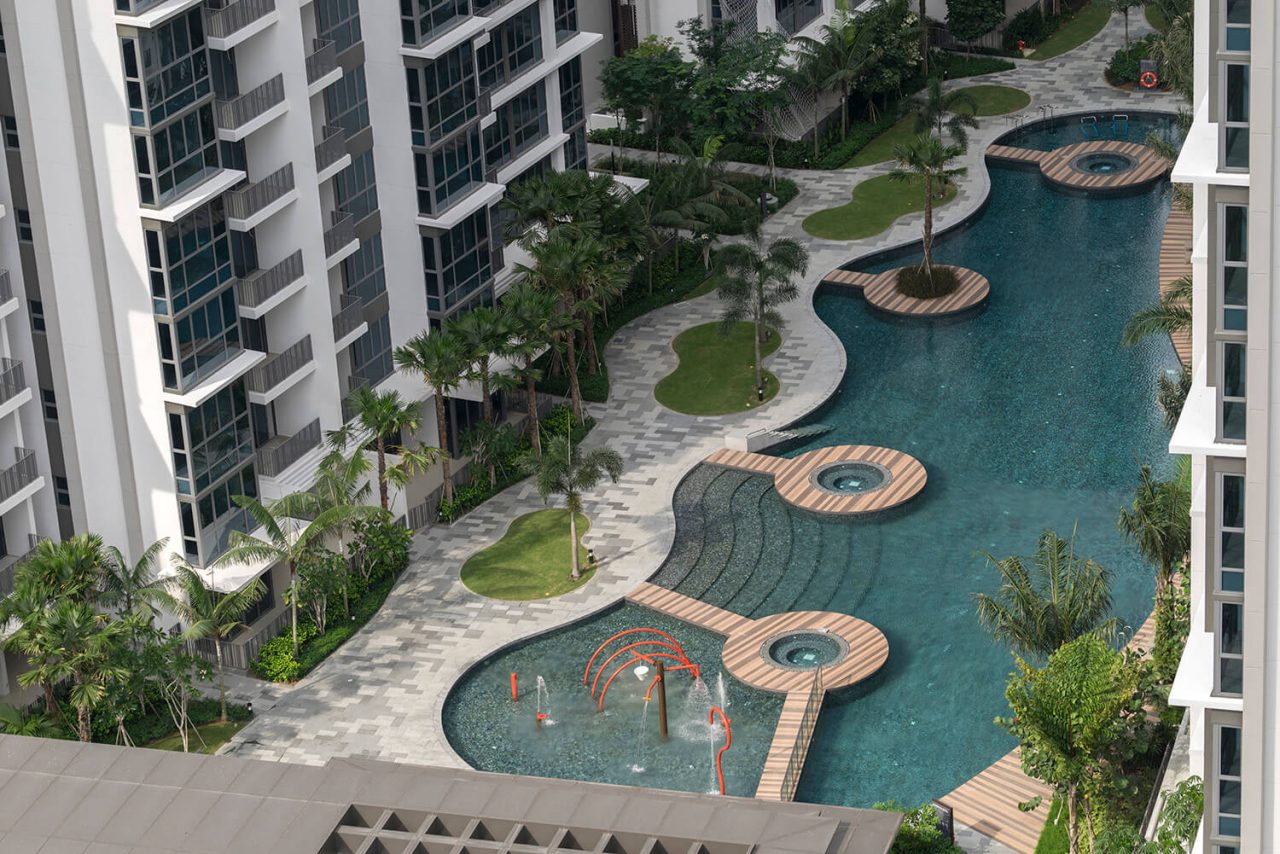 Now that we’ve seen the beach, let’s head back to Japan Loyang Besar to see what condo options you have here:

If you’re worried about amenities as I’ve mentioned how quiet the area is several times, have no fear – there’s not only a bus stop on Jalan Loyang Besar, you’re also only a few minutes away from Pasir Ris MRT and Downtown East shopping mall. Honestly, in my opinion, it’s the best of 2 worlds where you have nature at your doorstep but also shops.

Jalan Loyang Besar is actually a Y-shaped road that splits into 2 forks, so you might miss some of the condos if you’re not careful (I did!). The entire Jalan Loyang Besar area is very peaceful, but the Easternmost part is even more so as it’s currently surrounded by large tracts of state land. I’m not sure when these will be developed, as they’ve been marked residential, with a plot ratio of 2.1. However, currently, Singapore doesn’t get any more serene than this.

Besides the church, there’s also a pre-school on Jalan Loyang Besar:

Next to the pre-school is Riz Haven condo, which enjoys unblocked views on this side (as the pre-school is much shorter than it). Interestingly, some of the blocks also seem to be built on pillars, so even the units on the lower floors shouldn’t have ventilation or privacy issues.

Walking past Riz Haven, we have Bluwaters condo and, a little further down, Bluwaters 2:

Even if you’re not lucky enough to have a sea view, you (currently) benefit from lush greenery views. This is the view that the units shown in the above photo have:

Besides condos, there are also townhouses on Jalan Loyang Besar.

We then arrive at Aston Residences, a 946-year leasehold cluster house development that marks the end of Jalan Loyang Besar Road, as well as the end of my affordable waterfront housing series.

If you’re looking for a cluster home, there are several units (built up around 4672 sq ft) on sale here for around $3 million.

I’ve enjoyed going around Singapore in search of waterfront housing that isn’t too exorbitantly priced. The offering is certainly varied, from waterfront HDBs to fancy condos opposite Bedok Reservoir with roof terraces . However, if I had to pick my favourite waterfront area, I would be hard-pressed to choose between Sembawang Beach and Jalan Loyang Besar. Both places have the atmosphere of Old Singapore, and are very relaxing places to live in. Unfortunately, at the time of writing, neither had any units with unblocked sea views for sale, so my house hunt hasn’t quite come to an end.

If you’re happy to move to a non-sea facing unit on Jalan Loyang Besar, here are some of the over 2,000 sq ft units for under $2 million that I had promised. Do note that they all have large outdoor terraces, which is something I’m looking for (how else will you enjoy the sea breeze?), but isn’t to everyone’s taste!