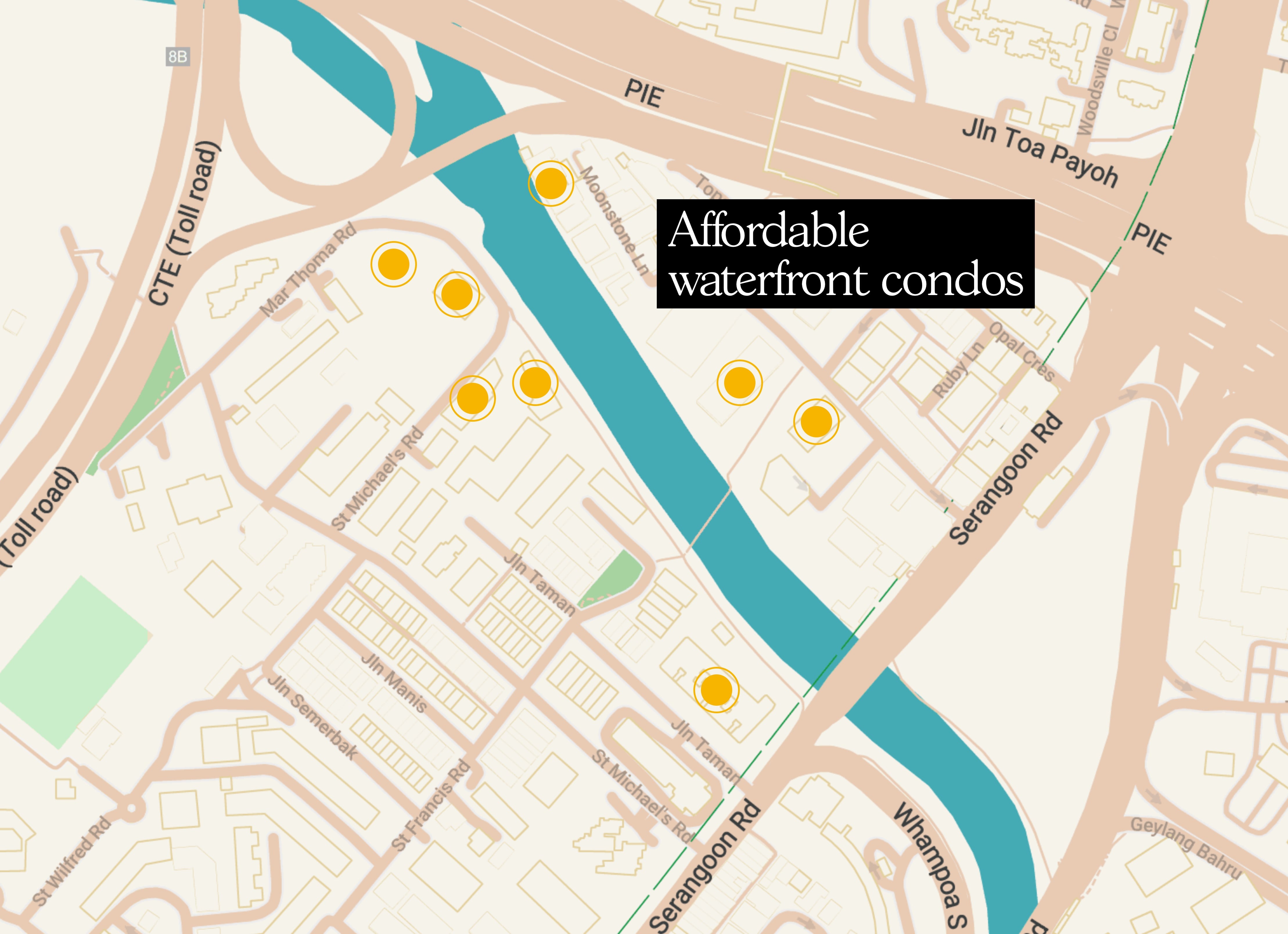 If you’ve been following my series on affordable waterfront housing (which so far has spanned from HDBs to condos and cluster houses), you might have noticed that the vast majority of waterfront housing in Singapore is 99-years leasehold in nature.

Which made me wonder what were the freehold options for those hunting for waterfront housing in Singapore. Sure, the obvious choice is the ones at Roberson Quay, which, for most Singaporeans, aren’t really “affordable”. And from the comments on my previous article, it seems like some of you would like to know too.

As such, I will be looking exclusively at affordable waterfront properties that are 999-years leasehold (“as good as freehold”) or freehold in nature. (Note that these developments may have a higher asking PSF than the 99-year leasehold properties I’ve previously covered – freehold does come at a premium, after all – but they’ll definitely be cheaper than what you’d have to pay for Robertson Quay (generally over $2,000 asking PSF – even for leasehold developments!), East Coast (you can find some that we’ve listed under the comments section of this article), Kallang Riverside ($1,972- $4,123 asking PSF at the time of writing) or Riverine By The Park ($1,973-$2,211 asking PSF at the time of writing).

So if you’re looking for such a freehold waterfront condo that doesn’t cost you an arm and a leg, District 12 (Balester/ Toa Payoh) is one such area that comes to mind – as there are many such developments along its stretch of Kallang River. There are also several along Whampoa River, but note that Whampoa River is so narrow, it looks more like a drain – the developments here do have lots of delicious food at their doorstep though so worth considering if you’re a foodie.

Here are 3 very low-density condos which are North of Kallang River and its park connector (which brings you all the way to East Coast Park in the East and Ang Mo Kio-Bishan Park in central Singapore):

Completed in 2004, Moonstone Residences has a total of 76 units spread over 19 floors – it’s the tallest of the 3 condos along this Northern stretch of Kallang River – and 30,894 sq ft in terms of land size. Unfortunately for fans of full facility condos, whilst there is 24-hour security, covered parking, a decent-sized swimming pool, gym, BBQ pit, and function room, there is no tennis court. (Personally, I’d prefer a condo with as few facilities as possible – preferably only a security guard and function room – to reduce maintenance fees!) But of course, to each its own.

Next to Moonstone Residences is Moonstone View, a 76 unit development with 8 floors and a land size of 41,425 sq ft – this is the largest plot amongst these 3 condos. The number of units is about the same, so living here should feel the most spacious. It is next to the park connector, and has a pool, gym, function room, BBQ pit as well as basement parking to protect you from the rain, something not many low-density condos have.

If you’re looking for a condo by a big-name developer, Moonstone View is the only 1 of these 3 that will fit the bill – it was developed by CDL in 2000. In my opinion, it also has the best location of the 3 as it is situated between Moonstone Residences (which is right next to the PIE) and M66 (which is next to Serangoon Road), so it’s the most protected from traffic noise and dust.

A low-density development completed in 2014, M66 is the newest of these 3 condos and has 70 units spread over a mere 5 stories (i.e. it has the fewest units/ most privacy amongst these 3 condos.) It comes in at a land size of 32,988 sq ft but somehow has the fewest facilities (a pool, playground, and something that could possibly pass off as a gym if you’re not picky- it only has about 3 pieces of equipment in it.) Parking is on the ground floor here (and not the basement) and not all lots are covered. On the plus side, it has a side gate with direct access to the Kallang River Park Connector.

The area surrounding these 3 condos is a little industrial but also has some eateries so you’re not totally isolated. Several of the commercial plots around here, such as Mah Building, Poh Leng Building, and Ah Seng Stainless Steel (which are next to Moonstone Residences) have been zoned as high-rise residential, so we may see some redevelopment of the area in the future.

(Note that Ah Seng Stainless Steel can have commercial operations on the 1st level according to the Masterplan. In addition, if your unit at Moonstone Residences faces these buildings, your view may be blocked in the future.)

As mentioned above, the area is also sandwiched between the PIE and Serangoon Road so noise, dust, and pollution can be an issue for some units. In fact, the PIE is so close to M66 that you can view it even from the balcony of interior facing units! If you like being along the Kallang River, but hate traffic, you might want to look at the developments along the South Bank of the Kallang River, such as:

THE ABERDEEN (freehold; no units for sale at the time of writing)

With a total of 132 units, Aberdeen is the largest development on this list with a land size of 70,279 sq ft (larger developments generally have better facilities and/ or lower maintenance fees. However, despite the increased number of units, Aberdeen still does not have a tennis court.) Built in 1997, it’s also the oldest condo amongst these river-fronting developments. It’s built parallel to the river, to capitalise on its views but this means that the units will get some morning/afternoon sun.

A 41 unit development built in 2014, Riverside Melodies, like The Aberdeen, maximises its riverfront location (and unblocked views) by building parallel to Kallang River and thus gets the dreaded morning/afternoon sun. (On the plus side, lovely sunrises and sunsets.) There are lots of windows so the units are nice, bright and rather breezy. Despite having the fewest number of units on this list, the facilities include the typical pool, BBQ, gym, parking, and security.

Built in 2012, Airstream has 70 units set over 12,879 sq ft and 11 stories. There is a small roof terrace where the facilities such as the pool, BBQ pit, and gym are located.

Although parking is mechanised and all the units get some indirect East or West sun, the condo appears to remain rather popular, with 12 sales transactions having taken place so far in 2021 (transacted PSFs range from $1,313 – $1,618) – it’s the condo with the most “movement” on this list! Still, it’s a small plot of land so future potential will likely be limited here.

Developed in 2010 with 49 units in a single tower of 15 stories and a land size of 23,961 sq ft, most of the units at St Michael Regency currently have lovely unblocked views. A teeny development, there’s the usual pool, gym, and clubhouse but no tennis court. Moreover, like M66, parking is on the ground floor (not basement) so not all lots are sheltered (i.e. you may need an umbrella to get from your car to your flat if it rains).

Completed in 2015, Riviera 38 has 102 units located across 27 stories and is situated on the site of the former Hup Cheong Mansion (which went en-bloc in 2007). The majority of the units (4 out of 5 stacks) benefit from a North-South orientation which is generally considered to be the best facing for housing in Singapore (as it doesn’t get the dreaded morning or afternoon sun. The least fortunate stack faces the NE/SW so you’re still somewhat shaded from the full blast of the sun.)

There’s an on-site management office, pool, gym, function room, and BBQ pit (no tennis court) – the facilities are elevated and the pool is quite lovely as it is bordered by treetops (as are the BBQ pits). (Click here to see a video tour of the facilities) The gym actually looks bigger than the 1 at Waterfront Isle – which has more than 5 times the number of units! And personally, for me, I do believe Riviera 38 has the nicest facilities on this list.

Unfortunately, Riviera 38 is also very close to the CTE so noise and dust are probably issues here – despite the waterfront location, it doesn’t feel all that relaxing when you look out of your window due to the endless stream of cars right behind the river! (Those who thrive in urban environments may like it though.)

We’ve come to the end of our list of Kallang River-fronting condos in Balestier. Besides District 12, Pasir Ris is another region to consider if you want a freehold/999-year waterfront condo so we’ll be heading East to explore that part of Singapore next week, looking not just at condos but also at the very rare phenomenon of affordable waterfront landed housing!