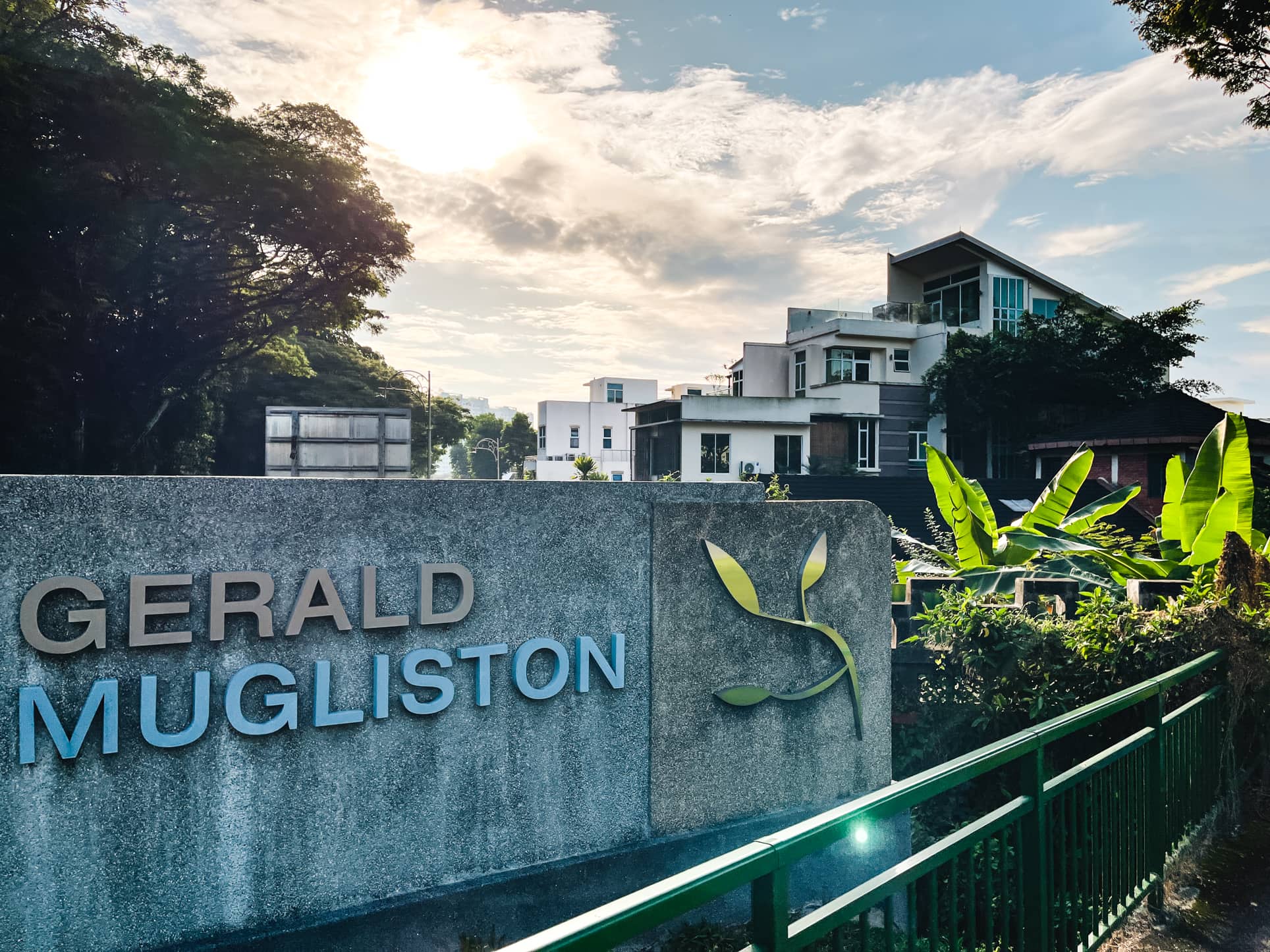 Gerald Mugliston Estate is a popular area, as it’s had the most requests I’ve received to tour it so far! And, after visiting the estate, I can see why: it is a nice, spacious and quiet landed enclave in between 2 malls (Seletar Mall & Greenwich V)! Bordered by Sungei Punggol, Yio Chu Kang Road, and the Fernvale HDB blocks, the area consists of several streets including:

It not only includes landed houses but also has a condominium, Seletar Springs, and a cluster house, Summer Villas.

Residents of the area have easy access to the coast-to-coast trail along Sungei Punggol, which is close enough for easy access, but not so close that it’s disruptive. Some houses along Mugliston Park have backyards that look out directly onto Sungei Punggol – i.e. they are single-loading, with no houses behind them to affect the ventilation.

Some streets were indeed very windy when I visited. The estate is situated on rolling land, so some properties are located on higher ground and thus windier.) Although there is a park connector along the river, it is located on the other bank (i.e. not directly underneath the Mugliston Park houses, so not quite as noisy as some other estates which have Park Connectors nearby.) Personally, I’d be very happy to live at Mugliston Park!

However, note that the left side of the photo (beyond the Park Connector) leads to Singapore’s last mainland kampong (Lorong Buangkok). According to a 2017 article in Today, the kampong is a 1.22-hectare piece of land that has been divided into 4 land parcels. One will be redeveloped into a Primary School, another a Secondary School, the 3rd a Park, and the last and largest piece a major road/highway to Seletar. In 2017, this redevelopment was said to likely be “several decades later” when the “long-term development of Seletar” happens.

It’ll be a shame to lose one of the last few pieces of “old Singapore!” (If you’re curious about the kampong, you can find out more about it here.)

Although the road here has a single white line (so no parking), the side roads mostly have dotted white lines and I had NO problems finding a space to park on both my visits. If you’ve been following this series of landed tours, you’ll know that that’s very uncommon (hence the article title!)

Another example of clever design, where the upper floors of connecting houses are built apart from each other, so that they can incorporate more windows and get more sunlight into terrace houses, or semi-Ds. (We saw something similar at Springside last week.) 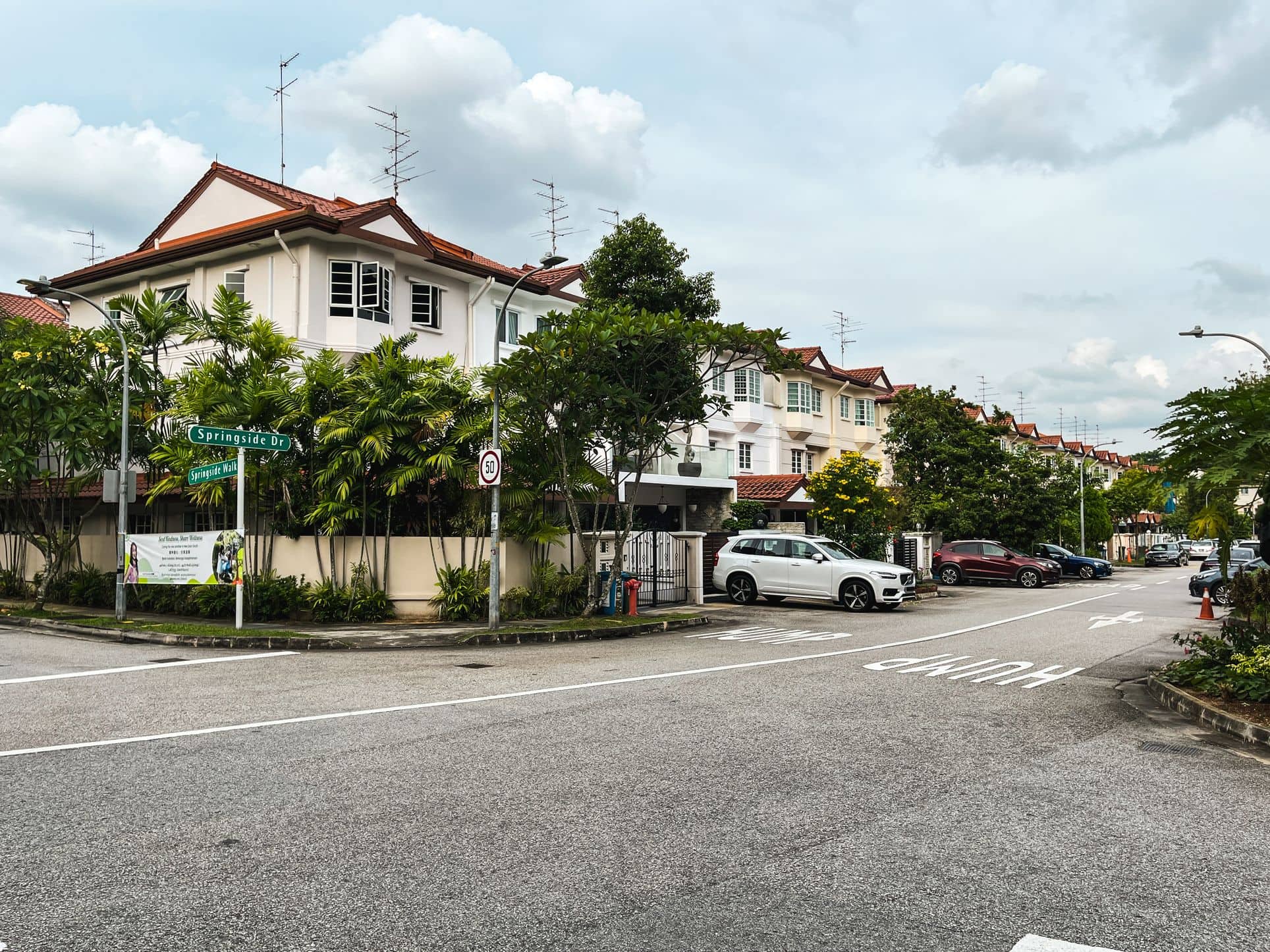 Property StoriesTouring The Springside: A Freehold Self-Contained Landed Estate With Not A Tall Building In Sight

I quite like Seletar Springs, as they have duplex penthouses with lofty ceilings, but some will balk at the fact that it’s a 99-year leasehold condo celebrating its 21st birthday. Residents appear quite happy though, with an average 4.1 rating (of 77 reviews.) This isn’t the case at some of the other strata developments around here (according to Google.)

Do note that Seletar Springs is zoned 1.4, so it can only be built up to 5 stories high (good news for the residents of the landed houses as you don’t have to worry about a skyscraper blocking all your light and air, but maybe not so welcome news for owners of the condo! (There is en-bloc profitability and possibility – if you can build taller, the developers can build more new units.)

There are several shelters for bikes (and humans, I guess?) dotted along Gerald Drive. Although it is a “main road” in the estate, I don’t see any bus stops or buses driving in, unlike Opera Estate. (Everyone will have a different opinion, but I much prefer it this way, as it’s less noisy and hectic!)

This reminds me of what I saw at Victoria Park Villas and is part of an intelligent design I think. (Having the garden on the higher ground makes it windier, so you can better enjoy your outdoor space AND you don’t feel like you’re basking in car fumes when you relax on your patio!  (Families with elderly members will have to check how practical such an arrangement is for them, as the stairs become more of an issue as we age.)

Unfortunately, with such massive plots of land (those look like semi-Ds), the houses here aren’t exactly “entry-level” properties. A quick search on PropertyGuru showed that there is only one 3,492 sq ft semi-D for sale (at the time of writing) at $4.95 million (Note the ad states that that is the land size and not the build-up, so it’s a very good-sized semi-D.) If that is beyond your budget, there is one unit for sale at Gerald Residences for $4.3 million.

As mentioned, there are enormous houses along Gerald Crescent – bigger than some GCBs I’ve seen!

Here’s what Gerald Drive looks like, at the start of the intersection with Yio Chu Kang Road. (If you were wondering, there are 2 entry and exit points for cars at Gerald Mugliston.)

I was standing with the houses of Gerald Drive behind me, at the main entrance into the estate. And looking onto the HDB blocks which, as you can see, are behind a plot of empty land.

I decided to head out to the main road and walk down it to see what it was like. Despite not being very busy when I visited (8 am on a Sunday morning), Yio Chu Kang Road was distinctively noisy and I wonder if the sound of the traffic can be heard from inside the houses closest to the road.

Note: Although I encountered no wildlife walking around, based on this news report, it seems like otters may be an issue here (at least they are one if you intend to keep fish!), probably because of the proximity to Sungei Punggol.

We’ve now come to the end of our tour but, before I go, I should briefly speak about the amenities! As mentioned in the introduction, something nice about Gerald Mugliston is how it’s so quiet and spacious yet has several malls within walking distance:

Oh and there’s also Buangkok Square Mall, part of the public housing development there. You don’t get the big fancy chains that you see at Seletar Mall or Greenwich V, but you get lots of practical stores such as Koufu Foodcourt, Selfix DIY, and Mr Snippers Classic Barber Shop.

Unfortunately, when it comes to public transportation, Gerald Mugliston isn’t the most well-connected. As mentioned, it’s got bus stops on Yio Chu Kang Road but no MRT close enough that it’d be your top choice for getting around.

Based on Google, I believe the closest should be Hougang MRT at over 20 minutes walk. Assuming you live at the end of the estate that’s closest to Hougang MRT of course!) From the other end, it takes about 30 minutes. (It might make more sense to have a car to take the LRT. Layar LRT is about 10-16 minutes away.)

Now that we’ve finished our walkabout of Gerald Mugliston, what did you think of it? In my opinion, it’s definitely a nice place to live now that Seletar has more amenities, assuming you can find a property you can afford! Join me again next week, as we go somewhere new. Feel free to keep the estate requests coming!

The empty plot of land bordering the estate and the hdb area is meant for the extension of Buangkok drive (major road). This is a near term development, as the tender has already been called, and construction will start 2H 2023.

Unfortunately no more peace and quiet! You should check out some part of Seletar hills, definitely some cheap jems too

Yes, just go on URA to see. Looks like a 6 lane highway to punggol.

Awesome comprehensive review as always, Ryan. Could you do a review of the private housing along Hillcrest & Greenwood? Always loved the area. Thanks! 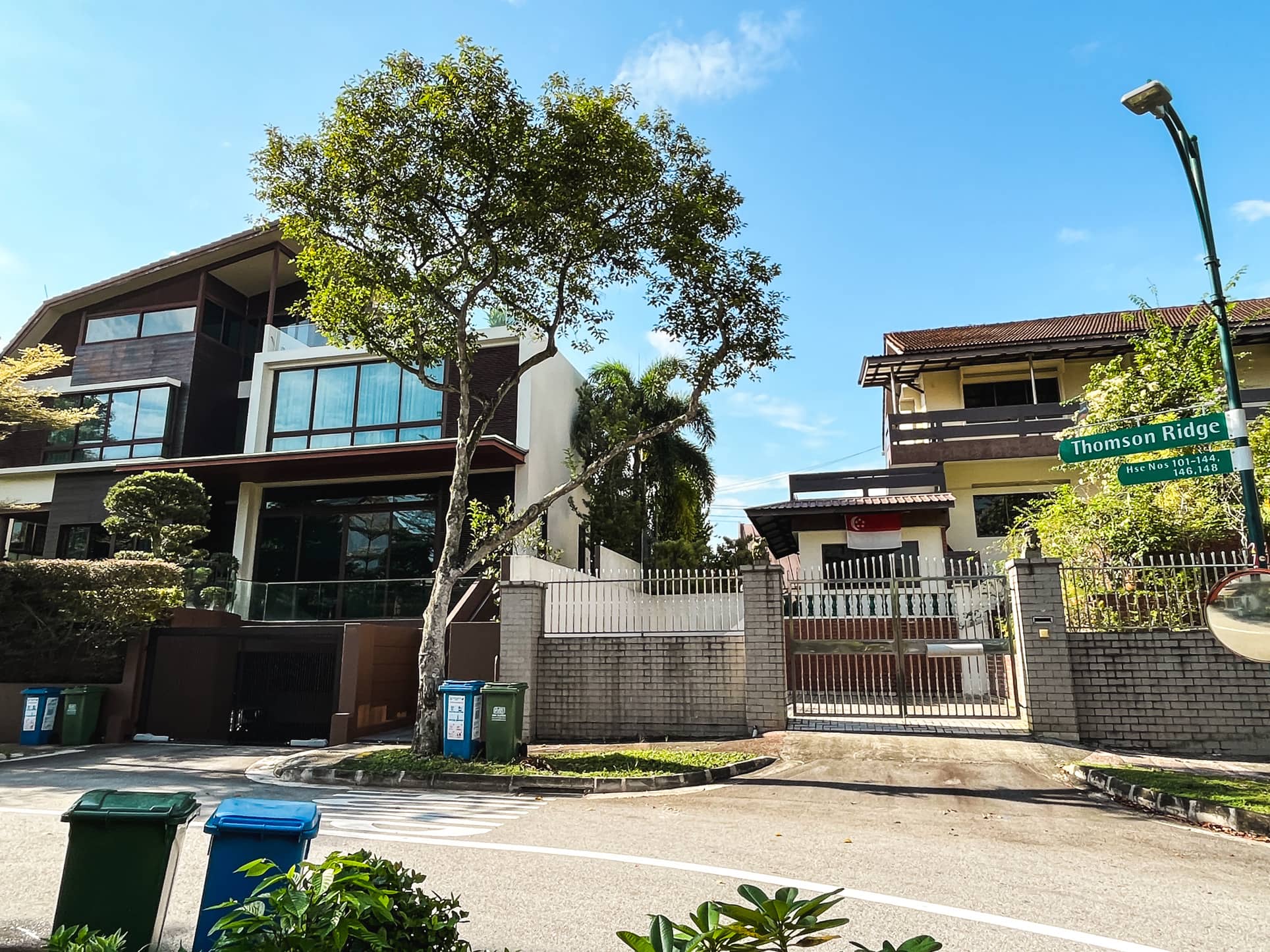 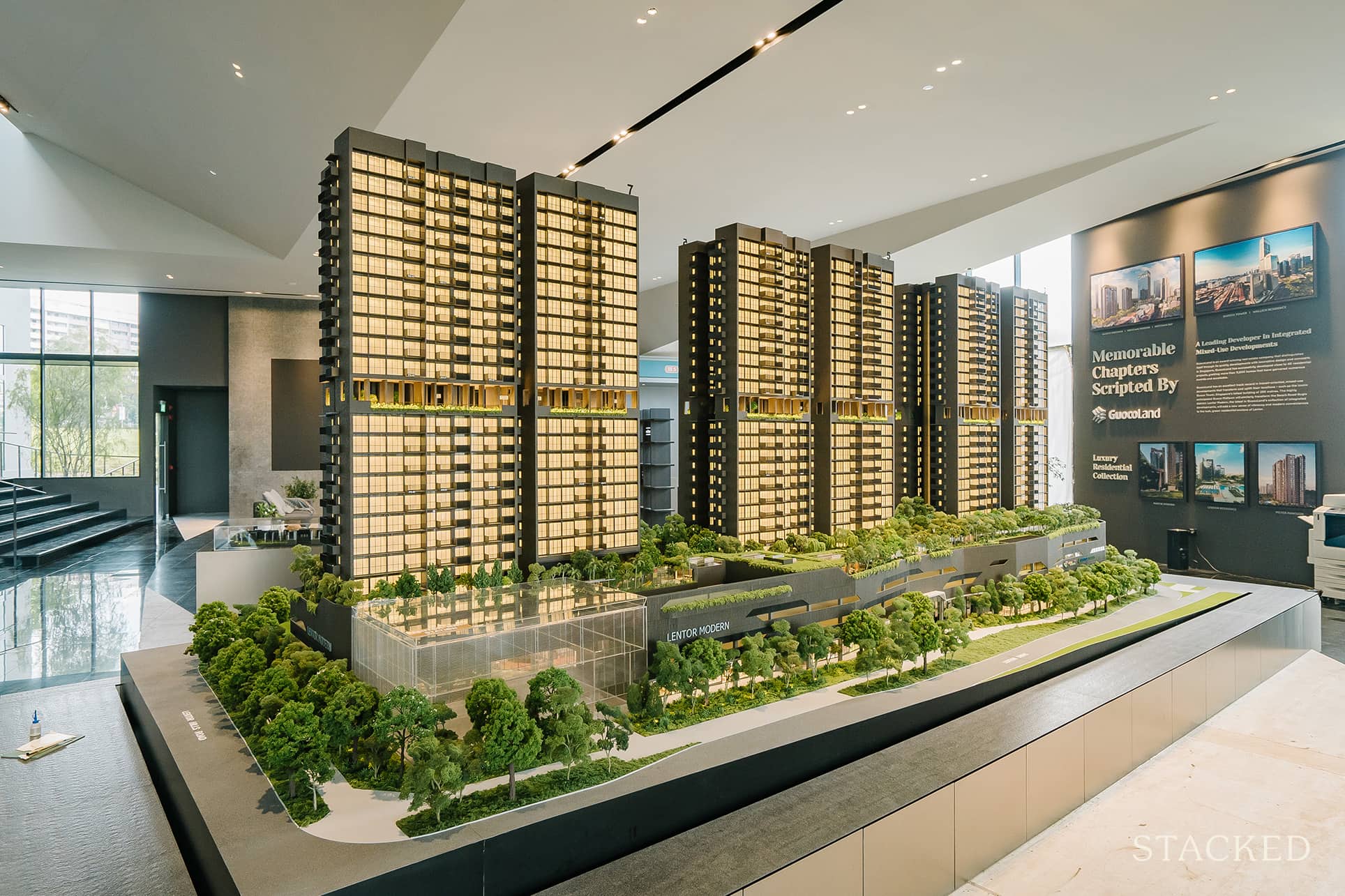