Commentary Here’s The Next Mega Development: Why This Dunman Road Site Could Attract Developer Bids Of $1.3 Billion 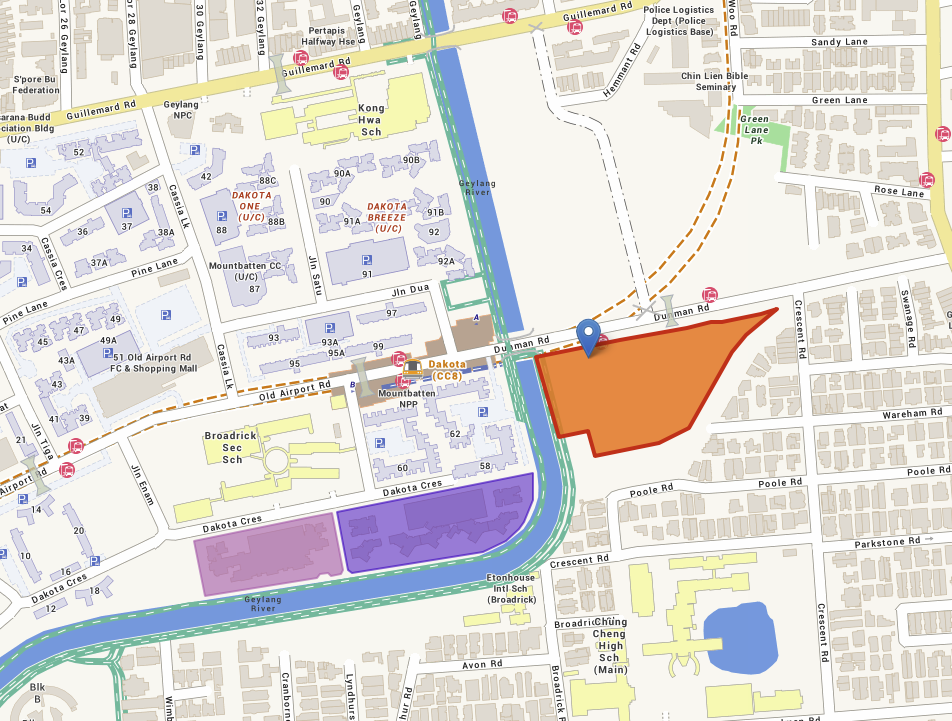 Property developers are plagued by depleted land banks this year; so it’s not surprising we’ll see more competition for GLS sites. However, the upcoming Dunman Road site is likely to come with a daunting price tag – at potential prices of over $1 billion, it’s only the boldest developers who might go for it. Here’s what’s special about the site:

A site large enough for a mega-development

This massive plot is about 25,234 sqm, with a Gross Floor Area (GFA) of around 88,321 sqm. It’s located between Dunman Road and Poole Road, and right next to the Geylang River.

This is right across the river from the Dakota Crescent HDB estate, where Old Airport Road connects to Dunman Road. This is close to where the old Guillemard army camp used to be (the camp is already in the process of being demolished, and will be long gone before any new development is finished).

A land plot this huge could yield around 1,040 new homes; sufficient to give mega-development status to any condo here.

Nonetheless, some could also see this as a reasonable price point, as the Dunman Road site is very well located:

Note that we have seen GLS sites go for over a billion dollars before; one of the most recent being the Jalan Anak Bukit white site. But that was at $1.028 billion, less than the hefty price tag we’re seeing at Dunman Road.

Dakota MRT, on the Circle Line, is just a few short minutes’ walk from the land plot (around five to six minutes at our estimate). This train station is just one stop away from Paya Lebar MRT station, which is both a commercial hub (see below), as well as a connecting station to the East-West Line (EWL). This would place residents around six stops from Raffles Place, after changing lines in Paya Lebar.

Next to Waterbank at Dakota (a leasehold condo completed in 2013), any condo built here will likely have the best accessibility by public transport, for this stretch of Dunman Road.

2. Multiple good schools nearby (some within walking distance)

Broadrick Secondary School is the closest to the plot and should be within five to seven minutes’ walk. Chung Cheng Secondary is also roughly within a 10-minute walk.

The mix of many nearby schools, along with green spaces along the Geylang River and MRT access, add quite a bit of family appeal.

This is probably one of the bigger selling points. Paya Lebar Quarter (PLQ) is a major commercial hub, with grade A office spaces, large malls, and most of the amenities a resident could need.

The issue with PLQ is the high urban density and traffic, along with prices that have climbed significantly with new development. As such, a common alternative has been to find areas near PLQ, but not within the hub itself.

The quick sales at Parc Esta (sold out and set to be finished this year) demonstrate this – a lot of buyers were drawn to the fact that it’s in Eunos, one train stop from PLQ. We do think the Dunman Road plot offers a similar advantage.

Due to the proximity to both PLQ and the town area, any condo on this plot could also be a viable rental asset.

4. Lots of places to eat

The Dunman road plot is, by happy coincidence, caught between two major foodie havens. The first is the Old Airport Road Food Centre, as well as the other small eateries scattered around the area; the other is the stretch along Tanjong Katong Road, which has an eclectic mix of everything from late-night hot pot to upscale restaurants.

While they’re too far to comfortably walk, we note there’s a bus stop just in front of the land plot. You should be able to use most of the bus services to head down just two or three stops, to get to the foodie areas.

5. Can face the lower density area toward Poole Road

The side facing the Geylang river looks out at the old Dakota Crescent HDB blocks, but the developer could also make use of the facing toward the Poole Road area. This is a lower density, landed enclave, which may make for a less “busy” or impeded view.

In any case, the overall area is not as packed as you might expect, from an area so close to the city. It will be affected by how well the developer spaces out the blocks though, as a 1,000+ unit mega-development can quickly feel cramped if the space isn’t handled well.

The Dunman Road site will be closely watched, by en-bloc hopefuls

The interest (or lack thereof) in the Dunman Road site has some significance to the en-bloc scene.

Developers have been hesitant to take on larger land plots, due to the Additional Buyers Stamp Duty (ABSD) time limit. A developer that cannot complete and sell a development within five years will be saddled with the hefty ABSD tax, which is a percentage of the land price… and a $1.3 billion price tag means truly hair-raising stamp duty fees.

On top of this, the December 2021 cooling measures raised the ABSD for developers: they now pay 35 per cent of the land price, of which only 30 per cent is remissible (assuming they meet the five-year timeline).

This has crushed en-bloc hopes in some larger developments, as developers are taking on significant risk with these. Although on the plus side, mega-developments have been doing well too, with the majority fully sold, if not, close to being sold out.

For more on the situation as it develops, follow us on Stacked. We also provide in-depth reviews of new and resale condos alike, so you can make a well-informed property decision.