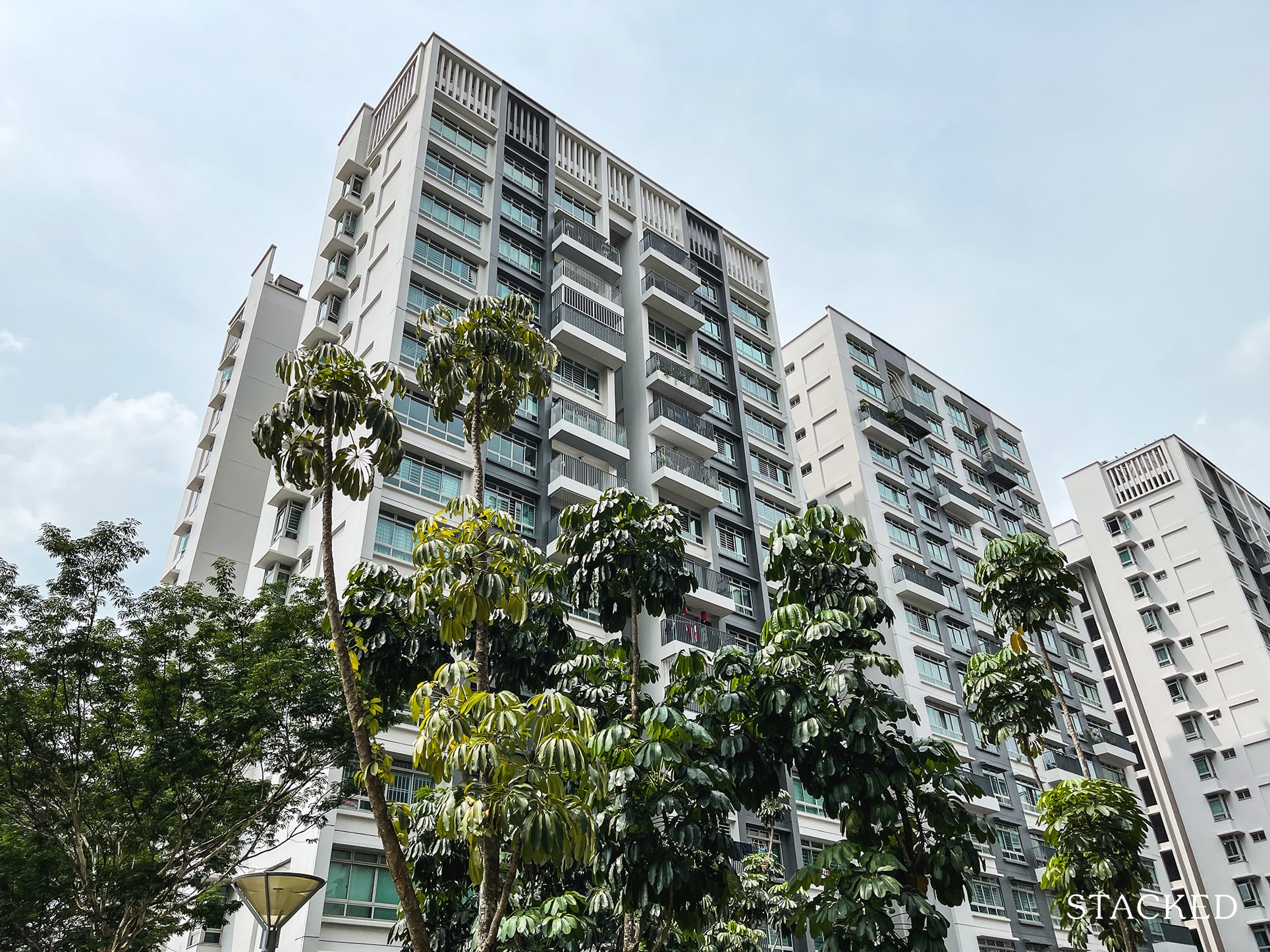 This is just a matter of size more than anything. Hougang is the biggest HDB estate in Singapore with over 51,000 homes; so it’s not surprising that many outliers can also be found here.

Besides this, Hougang was actually the first new town where HDB built double-storey maisonettes; so these rare flats in Hougang have had a lot of time to appreciate.

You’ll notice from the list that many of the higher-priced flats are from Hougang Central, or Hougang Street 21. Prices here shot up around 2003 when both the Hougang and Kovan MRT stations (North-East Line) were built. The units listed are within walking distance to the train stations.

On top of the advantageous location, some of the Hougang flats on the list are double-storey maisonettes, which invariably fetch a much higher price.

The two flats at Hougang Street 31 are more of a puzzler – they’re not within walking distance of the MRT station, and their location isn’t exceptional. The higher price might simply be due to their being executive flats, which are bigger.

Both flats here are the very rare jumbo flats, sized at 189 sqm and 177 sqm – a very spacious size in today’s context.

Woodlands Street 81 and 82 are close to the upcoming Woodlands North Coast. This will be a future business hub, with Grade A offices and lifestyle zones. All the flats on the list are within striking distance, and it seems sellers have already priced in the coming changes.

Buyers here may also have an eye toward the flat being an investment. The units close to Woodlands North Coast might be good rental prospects, and it’s worth keeping in mind that Woodlands is close to the causeway too (Malaysian workers are a possible tenant demographic).

The unit at Woodlands Street 41 is a surprise though, as there isn’t much apart from other flats in the area.

Jurong East is no longer the industrial backwater it once was, and property values here have risen significantly across the board. As for the 2 near-million-dollar flats, their location at Toh Guan Road is a major advantage.

Toh Guan Road is close to IMM, and JCube would only be around a six-minute drive. Getting to the Jurong East Interchange (East-West, North-South, and Jurong lines) is also a simple matter from here, being just a few bus stops away.

JEM and Westgate provide two more major retail options, once you get to the MRT station; they’re adjacent to it.

On that note, the unit at Jurong East Street 21 is quite close to the Jurong MRT station. It’s a bit of a long walk (a little over 10 minutes), but not totally unmanageable. IMM’s address is Street 21, so this unit would be along the same stretch, and that could certainly justify the price. For some future proofness, it will be in close proximity to the future Toh Guan MRT station (JRL).

And here’s a final tidbit for you, the executive maisonettes at Jurong East Street 21 were one of the last few maisonette blocks ever to be built by HDB.

Like many on this list, this particular unit at Treelodge @ Punggol is a special one, as it’s a 5-room loft duplex that is sized at a very healthy 147 sqm. You are in a rarefied company here, as there are only 14 such units inside the development.

While Punggol may be far from most places, there’s no doubt that this would be one of the places to live in Punggol. It’s within walking distance to Punggol View Primary, and you are also close to Punggol Waterway Park for leisure.

You can also walk to Waterway Point, where there is a very vibrant mall, as well as having Punggol MRT station (and LRT station) right there too. And if that’s not enough you do also have your basic shops, supermarket, and coffee shop located right across the street at Block 612 or 301.

Other outliers like Yishun, Pasir Ris, and Bukit Batok

(Pasir Ris is actually mature but see below)

Many of these flats simply have good fundamental locations.

The flat at Yishun Ave 4, for instance, is practically across the road from two schools (Orchid Park Secondary and Naval Base Primary). You are also within the magical 1 km radius of Northland Primary and Huamin Primary. It’s also just seven minutes walk from Wisteria, which is a mixed-use project that has commercial units.

The unit itself is the rare unicorn that is a jumbo unit, at an expansive size of 187 sqm. This broke the $1 million mark as it was sold at an eye-popping $1.038 million.

Price aside, while it is close to Safra Yishun and Khoo Tech Puat Hospital (and Yishun Park for leisure), you are about a 15-minute walk away from Yishun MRT station.

All this suggests that high appreciation isn’t restricted to mature towns. Even if a flat is in a non-mature area, proximity to key amenities still brings upside potential. It’s irrelevant that Yishun is less built up, for example, if your flat happens to be minutes from Northpoint City.

Also, there’s a common misunderstanding that “maturity” is based on how convenient it is to live in a given town. In reality, maturity is determined by available land.

If we use the conventional meaning (convenience), it’s questionable whether Jurong East is “non-mature”, given the incredible retail powerhouse that it’s become. The conventional use of the term also doesn’t fit Pasir Ris, which is designated as a mature town – but Pasir Ris is still far off from the convenience of, say, Bishan and Queenstown.

When hunting for your next flat, don’t obsess too much about “must-have” mature areas. Be flexible with regard to HDB town, and focus more on the surroundings of the specific flat.

For more direct help, do reach out to us at Stacked. You can also follow us for ongoing updates, as we monitor prices, trends, and the overall sentiment toward the Singapore property market.

5 room flats at Pasir Ris One are actually being listed for 1 buck now. Cooling measures be damned!