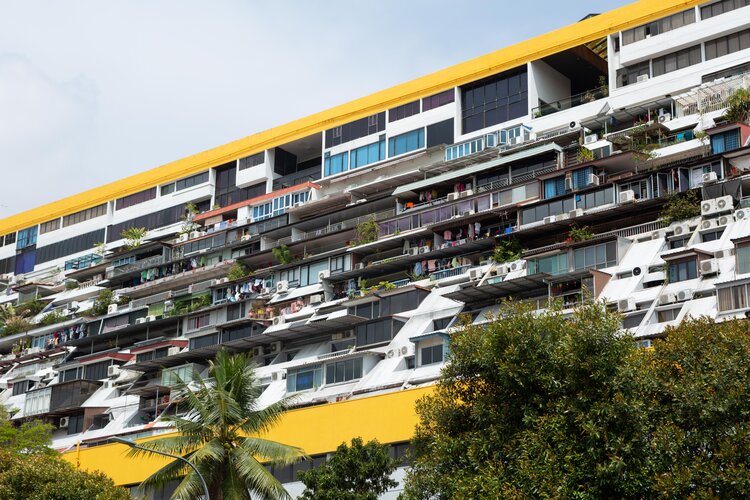 Prices per square foot are climbing, but the overall quantum isn’t increasing much. What does that mean for the Singapore private property market? It’s simple: homes are getting smaller.

Many of us long for the homes of the previous decades, where a three-bedroom condo meant a living room you could almost play tennis in. While the age of huge condos may be past, there are still some generously sized properties out there. Here are the developments with the biggest three-bedders, which are still under $1.5 million:

Golden Mile Complex elicits a strong love-it-or-hate-it reaction. Some Singaporeans consider it shabby and run down, others consider it a historical landmark. So far, the latter seems to be winning, as Golden Mile is up for conservation.

Golden Mile was one of the first mixed-used developments in Singapore, next to People’s Park Complex (in fact the same architectural firm, DP Architect, is behind both developments). Today it’s also known as “Little Thailand”, because of its popularity among Thai nationals, and also for its bus terminal with services into Malaysia.

Now Golden Mile is an old building, and there many of the units have got maintenance issues. However, there are still interested buyers for two reasons.

First, it’s the most affordable way to own a large home in District 7. As of end February 2021, the average price of a resale condo in District 7 averages $2,146 psf. To get a unit the size of a Golden Mile three-bedder, you would be looking at a quantum of over $4.7 million. But the total price for a three-bedder in Golden Mile is under $1.5 million; a difference that buys a lot of tolerance for Golden Mile’s shabbier elements.

The other reason is the potential rewards, should Golden Mile be redeveloped (whatever form that may take). Golden Mile Complex is just 380 metres from Nicoll Highway MRT station, and 545 metres from Lavender MRT station. There are precious few residences in Singapore with foot access to both a Circle Line and East-West Line station. And if you drive, Golden Mile is a nine-minute trip to both Orchard and the CBD.

Coupled with the fact that District 7 seems to be overtaking District 9, it’s clear why some investment-minded buyers are eager to stake a claim; especially at the low price point.

That said, Golden Mile is one of the oldest residences in Singapore, and in urgent need of a facelift. So opinion is split: you either see in this a goldmine, or you couldn’t be paid to live here.

(Ps. You may face financing issues for a property this old. Whether it’s related to Golden Mile or another older property, contact us and we may be able to help).

Like the Golden Mile Complex, this is an old development that was completed in 1980, making it over 40 years old at this point. But as you may well know, when you want the space and have a limited budget, it is usually the older developments that offer such an arrangement.

Ignoring that dated and frankly unappealing facade, Sherwood Towers is definitely a well connected one, as it is located right next to Bukit Timah Plaza. Granted, it does not offer a mall shopping experience like the ones over at Westgate or JEM, but it still does present a really convenient stop for families. With music schools, tuition centres, salons, and clinics – most of it is pretty catered towards families with young children.

The best part? There is even a massive NTUC Finest that is opened 24 hours.

Of course, you do get a wealth of eating options over on the Beauty World and Chun Tin stretch. And with the upcoming commercial aspect of The Linq @ Beauty World that will be upgraded even further.

Public transport wise, the arrival of the Beauty World MRT station on the Downtown Line has certainly improved the connectivity to the area by leaps and bounds. That said, the walk to the MRT will be unsheltered. For those who drive, you have easy access to the PIE but that area does get jammed up during peak hours and on weekends.

Another plus point for families with young children will be the accessibility to Pei Hwa Primary School (it is quite literally just opposite). And Methodist Girls School is a short walk away. For older kids, Ngee Ann Polytechnic is located just across the road as well so it is rather well rounded. And let’s not forget the wealth of schools down the Bukit Timah stretch too.

Coupled with the huge units at under $1.5 million, Sherwood Towers has a lot to offer families. This is a good development for those who want a comfortable roof over their heads, and aren’t too worried about staying in a modern and updated development.

Loyang Valley is often rented out to foreigners working at Changi Airport. This development is on the easternmost end of Pasir Ris, and it’s less than five kilometres – about a five-minute drive – to Changi Airport.

(There is always likely to be some noise pollution near airports; but as most residents at Fernvale will testify, being near Changi Airport is nowhere near as bad as being near Paya Lebar airbase).

One key highlight will be the Loyang MRT station, which is expected to be up in 2029. While this is still some time away, the train station will be practically at the residents’ doorstep at 180 metres. Note that this is a Cross Island Line (CR) station, which will be one stop from Aviation Park and Pasir Ris East in either direction.

Loyang Valley is also within a low-density plot (Gross Plot Ratio of 1.6), and there are not too many units; so it feels almost like you’re like in a landed enclave. Coupled with the large unit sizes and low price point, many of the residents consider Loyang Valley a well-kept secret.

The only drawback is that you really need to drive if you want to live here. Public transport access is limited, and you will need to drive out for your groceries and other needs. A near-decade is a long time to be waiting for a train station.

Let’s start with the downside: Atrium Residences may be considered too close to the stigmatised parts of Geylang for some buyers. Note that it’s not technically within the red-light area; this spans from Lorong 8 to 24, and Atrium is along Lorong 28. Whether that’s too close comes down to a matter of opinion.

This is an unfortunately huge bugbear, as Atrium Residences is in a very good location. It’s just 460 metres, or a seven-minute walk, to Aljunied MRT station. This is one stop away from Paya Lebar MRT and Paya Lebar Quarter (PLQ), which is a major commercial and retail hub. It’s also four and five stops from City Hall and Raffles Places respectively.

Besides this, Geylang is a foodie mecca, with numerous 24-hour eateries; these are interspersed with minimarts and convenience stores, which make grocery shopping cheap and easy.

A city fringe location of 1,800+ sq. ft., at under $1.2 million, will be attractive to buyers who aren’t finicky about the vice area nearby; and like many parts of Geylang, rentability is high. But resale will be a challenging prospect, unless the neighbourhood changes dramatically.

And so while it isn’t located within the area of rezoning (this area has been reclassified from “residential/institution” use to “commercial/institution”). It is close by enough that any positive outcome from this will have an impact.

Bedok Court and its surrounding condos have been overshadowed in recent years, by the surge of newer developments around Tanah Merah MRT station. As is, Bedok Court is now mainly known for its quiet, spaciousness, and lower price point.

While it’s not near any MRT station (unless you bike, or consider a 15-minute walk to Tanah Merah MRT station to be acceptable), Bedok Court has two popular coffee shops within a four-minute walk; there’s also a 7-11 in the same vicinity. Siglap Centre, where you’ll also find a Cold Storage across the road, is fairly close at 3.2 kilometres (about a five-minute drive).

Where Bedok Court has really benefited in recent years, however, is with the completion of Bedok Mall and Bedok Point. These are a five and three-minute drive respectively, and provide much needed retail options.

That said, this is very much a pure home-owner’s buy. Bedok Court is getting along in years, and there’s an abundance of nearby condos (many closer to MRT stations) that limit potential gains. The main reason you’d still buy here is that you’re getting over 1,800 sq. ft. for under $1.3 million; and Bedok is a well built-up, mature neighbourhood.

If you’re still casting about for options, visit Stacked for in-depth reviews of new and resale condos alike. We’ll also keep you updated on news and changes in the Singapore private property market, so you can always find the home that’s right for your specific needs.

Analysis Uncovering How Much New Launch Investors Have Made Since 2017: Analysing Over 1,000 Sub Sale Transactions