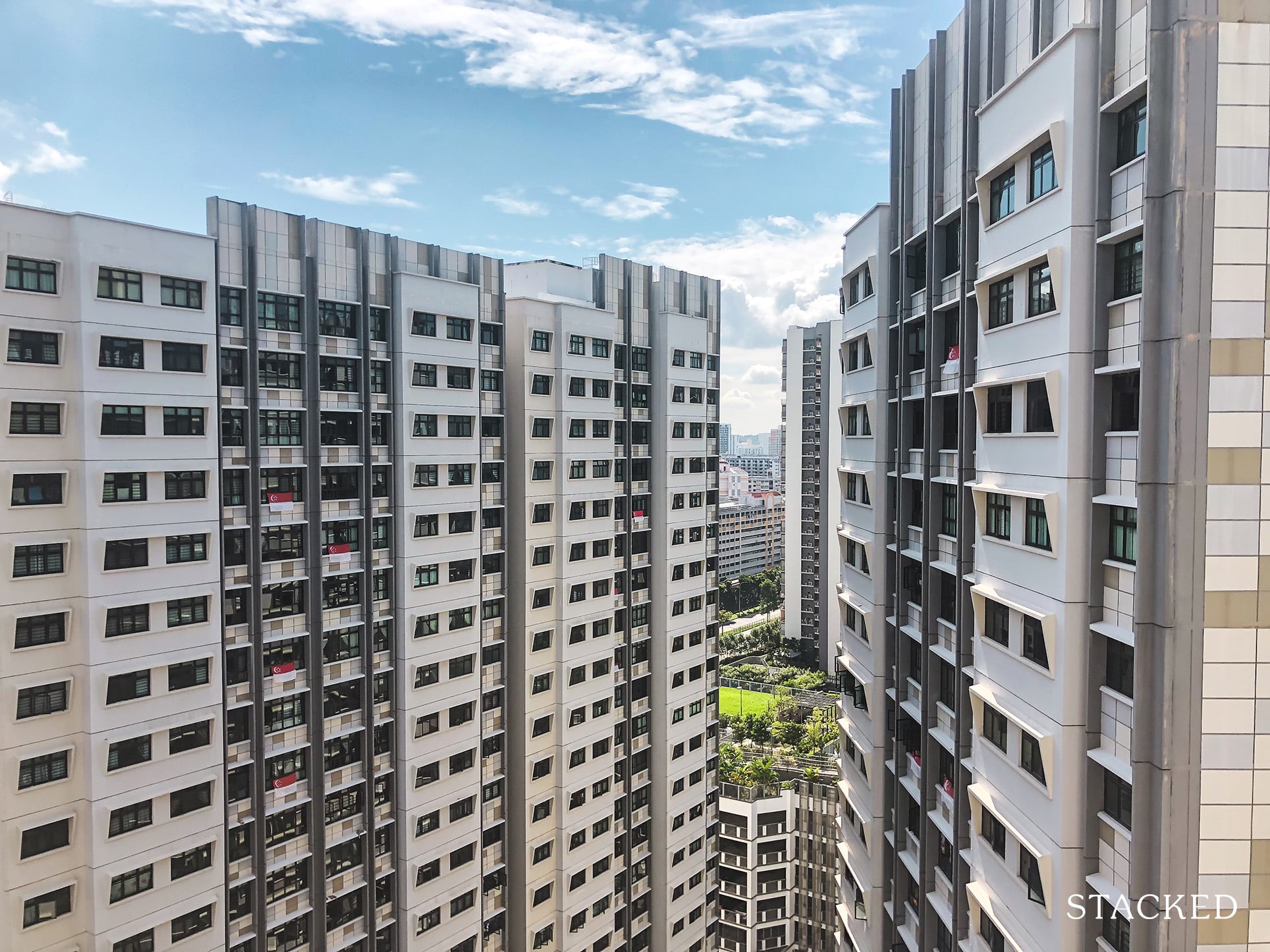 As of 2022, the average price of a 5-room resale flat, island-wide, has reached around $612,520. This is the point where home buyers yell “No way”, because everything they’ve seen appears to be well past that price range. The truth is, there are some HDB towns that go well beyond this – just as there are some that have stayed below $600,000. Needless to say, at a lower price point, you’d also have to expect certain drawbacks too – like being set further away from an MRT station, etc. Here’s where to find some of these more affordable flats:

Note: all of these flats are 10-years old or newer, so the lower price isn’t just an effect of lease decay.

Flats here have good access to the neighbourhood park, as well as schools. Riverside Primary and Admiralty Secondary are just next door, and three other schools are within enrolment distance: Greenwood Primary, Admiralty Primary, and Spectra Secondary.

The lower pricing may reflect the distance to Admiralty MRT station (North-East Line). This is one of those locations that can be described as “close, but still not really convenient”. At around 13 to 15 minutes walk, it may not be acceptable to every home buyer.

Frustratingly, there are two Giant supermarkets nearby, and they fall within the same distance. One is at Woodlands Mart and the other is at Admiralty Place, and you’d need about 15 minutes on foot to get to either.

Homeowners who are happy to cycle or hop on the bus, however, may find this a convenient location for the price.

Of course, Woodlands itself isn’t a location for everyone, as travelling to most parts of Singapore will take an extended amount of time. You’d either want to be working at one of the industrial areas just behind or one of the fortunate ones that are permanently working from home.

The great thing about Yishun Avenue 11 is its proximity to Yishun Park, and the adjoining Yishun Park Hawker Centre.

You can get to the hawker centre in as little as seven minutes on foot. If your idea of a good time is wandering about the park and then grabbing a meal on the way home, you’ll really like this spot.

Unfortunately, there’s no MRT within walking distance, so you’ll probably have to get there by bus (Yishun MRT is about a 24-minute walk). There’s also a lack of retail amenities, with the closest mall being The Wisteria (not a particularly big mall at that).

You do have two supermarkets nearby though, which would be the NTUC FairPrice and Giant at Block 414. It’s about an eight to 10-minute walk. 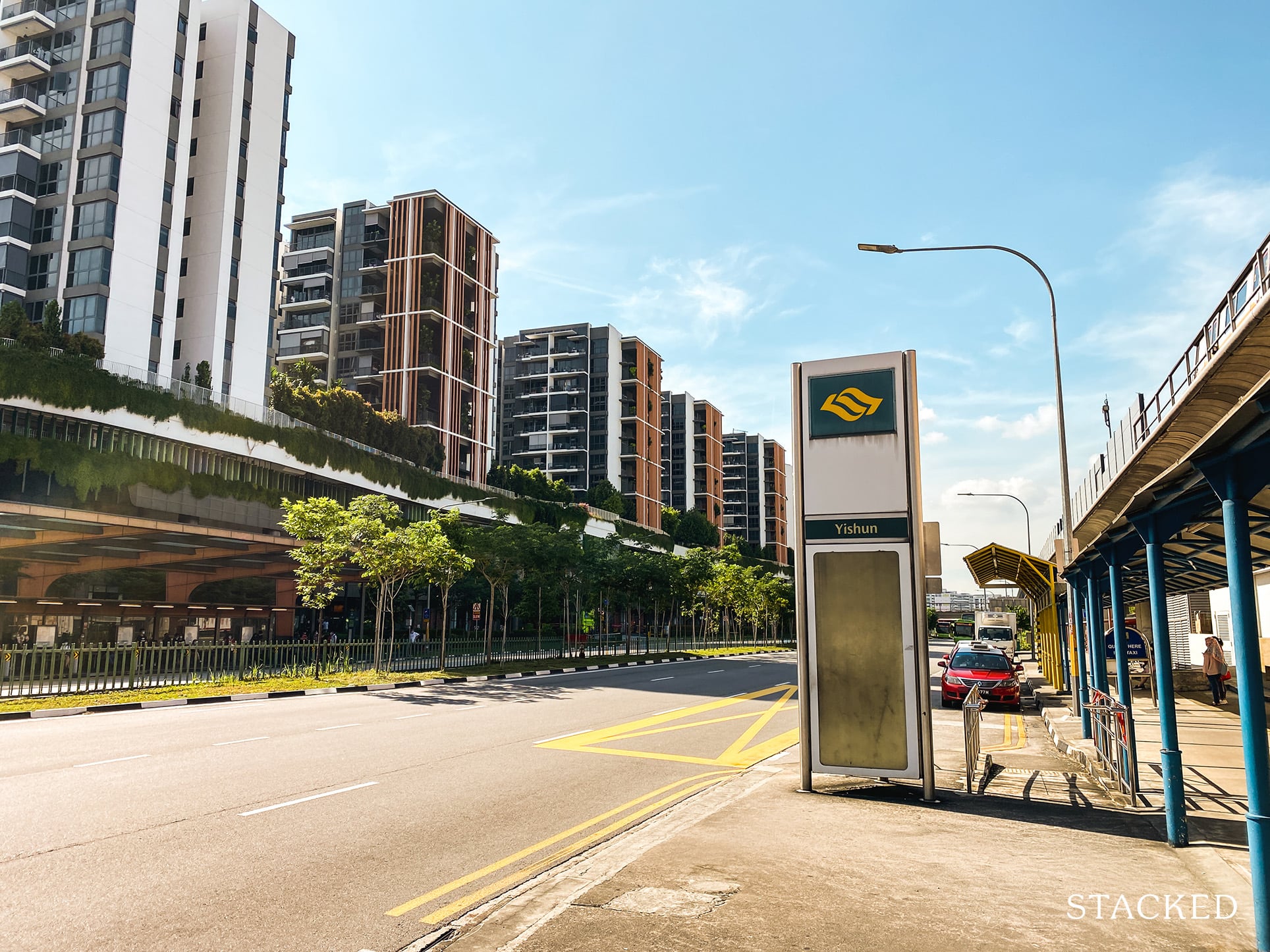 This area is a bit empty at the moment (other than loads of HDB flats nearby), but it’s got solid upside potential.

This is due to the upcoming Choa Chu Kang West MRT station (Jurong Region Line) This will be situated just six minutes’ walk from these flats, and will be up in 2026. It will also be just one stop away from the Choa Chu Kang interchange, which is where major mall Lot One is located.

For now, though, residents will have to use South View LRT or the bus. Be warned that the LRT station is very far if you go on foot, possibly 12 to 15 minutes. Choa Chu Kang MRT station will be just under a 20-minute walk, which isn’t ideal either if you have to take the train daily.

We do like that you are also close to the Choa Chu Kang park connector, which can take you all the way to the Jurong East/IMM area if you are game enough.

Choa Chu Kang Primary School is close to these flats, at just around six to eight minutes walk, while Concord Primary is about an eight to 10-minute walk away.

Retail-wise, Lot One remains a seven-minute drive out until the MRT station is ready. But Sunshine Place, an HDB mall, is just four minutes walk. There is a Giant supermarket here, as well as a food court and Guardian.

You just have to bear with the lack of MRT access for a few years.

These flats are just next to Mee Toh School, and both Greendale Primary and Secondary are within walking distance (around 10 minutes walk). Some buyers may be eyeing CHIJ St. Joseph’s Convent, but note that it’s further than it seems – it’s about an eight-minute drive and isn’t walkable.

Punggol Plaza is eight to 10 minutes’ walk away. As a mall, Punggol Plaza is a bit dated – in fact, it was the first mall ever built in Punggol. But there is a food court and an NTUC here, and it’s adjacent to the Coral Edge LRT station. From here, you can connect to Punggol MRT station (North-East Line). Rivervale Plaza is another alternative, but it’s a 9-minute drive out.

Do note you are also close to the Tampines Expressway (TPE), so some road noise is to be expected.

While Punggol is not a mature HDB town, this spot is decent enough to mitigate most of the issues. It comes down to whether you mind having to use the LRT first, to connect to the wider network. To be sure, this isn’t the most convenient spot in Punggol, but with prices really accelerating in the vicinity as well, some buyers may not mind the downsides here.

To be blunt, this isn’t the most convenient location. Yishun MRT station is about a 20-minute walk away, and it’s mostly just big stretches of other HDB flats near you.

That said, it does provide access to North Point Biz Hub – this is a light industrial area, which is just a three to five minutes drive. Homebuyers who work in the area will probably find these flats convenient. If you are the type that likes to live near nature, this is probably one of the bigger perks of living here as you are close to Khatib Bongsu Park Connector. You can easily take a walk down to Yishun Pond and the gigantic Yishun Park, which is about a 15-minutes walk away.

Amenities-wise, Junction 9 mall (not to be mistaken for Junction 8 in Bishan!) has a Sheng Siong supermarket and food court. It’s reasonably close, at just around a seven-minute walk.

Northpoint Shopping Centre is the major retail hub of the area, and it’s about a nine-minute drive.

This is a peaceful and quiet stretch to live in, but expect to have to head out for entertainment options, or more serious retail. If you must have an MRT or LRT station within walking distance though, look somewhere else.

Lastly, do note that Yishun Boardwalk is just opposite. As such, you’d have to endure the construction noise for the next few years.

A budget of $600,000 or under can get you a new(ish) 5-room flat, even in 2022. But as you can see, you’ll have to settle for the less mature areas. You should also be braced for a higher cash outlay, as close to a third of resale transactions now involve Cash Over Valuation (COV). We wouldn’t count on the home loan to cover the entire price of the unit.

For more direct help, do reach out to us at Stacked. You can also follow us for ongoing updates, as we monitor prices, trends, and the overall sentiment toward the Singapore property market.

Sorry but I really don’t consider any of these locations liveable. Perhaps they might suit the needs of those who need more space but can’t afford to pay 800k and up, which is what you need to shell out to get a 5 room in a decent location.

Yes that’s right, and probably why it’s affordable. I suppose this article is for those that absolutely prioritise space. But there are sacrifices to be made at that price point!

Is it really that cheap, when size is factored in?