Property Stories We Sold Our District 10 Home On Carousell: Here’s How We Did It 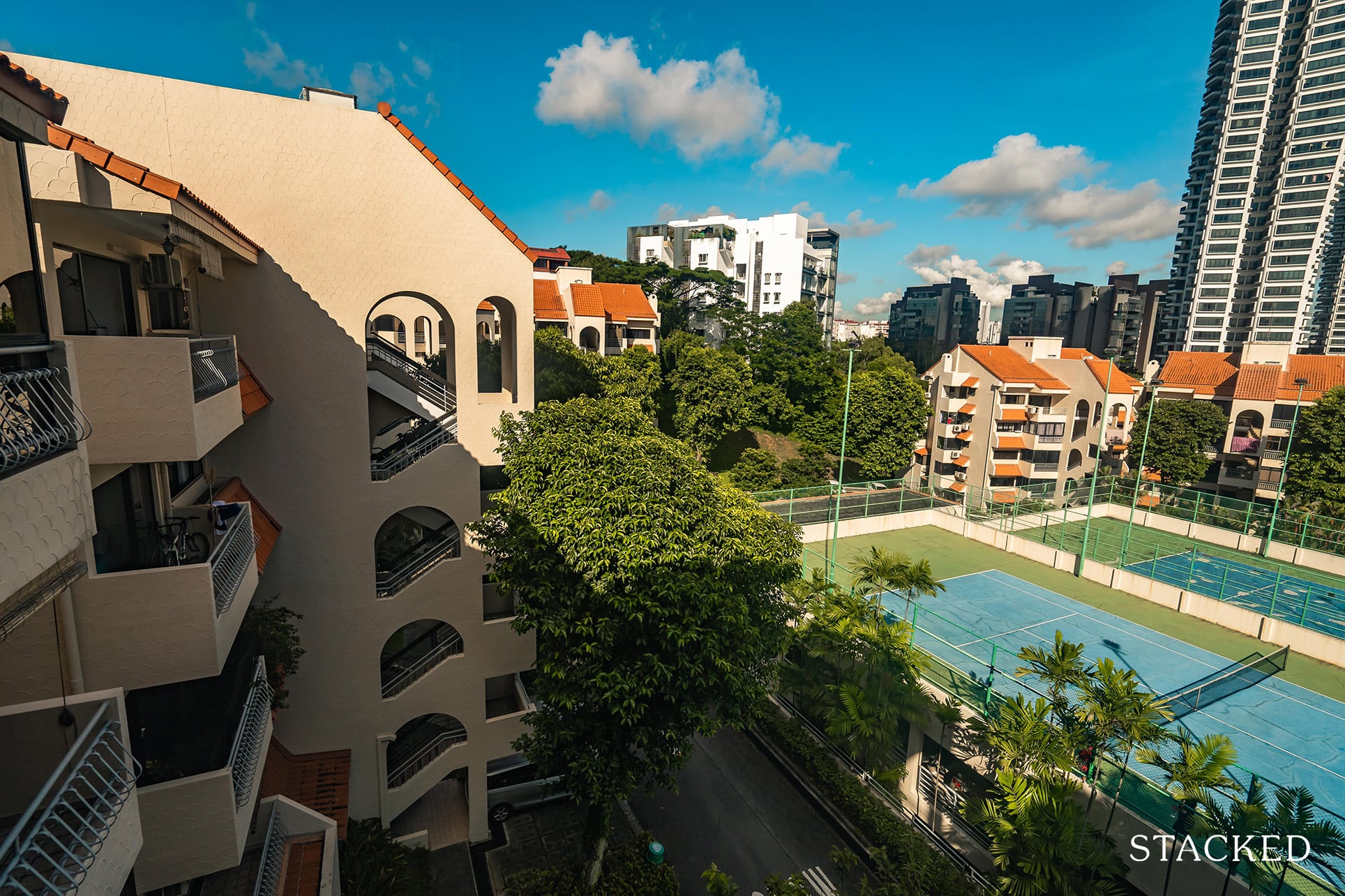 Selling your home is one of the most stressful things to manage. In fact, many have told us they enjoy buying far more than selling. As such, most prefer to use a property agent (that way you don’t need to bear with buyers stomping about the house, making comments about your décor…) This week, however, we met a couple who took a less common DIY route. They sold their unit on Carousell, with great success. Here’s how it worked:

A near en-bloc starts the ball rolling

Our seller, S, previously lived in a 1,615 sq. ft. unit at Spanish Village. This was a three-bedder unit, with three balconies converted to enclosed spaces. One balcony became an extended bedroom, another became a study, and the third became a living room extension.

S says that: “A couple of years down the road, the property was up for an en bloc sale, and we viewed some bigger houses in anticipation of the en bloc.

The en-bloc eventually failed, due mainly to cooling measures during the tender period. But the “damage” was done as I had started dreaming of a bigger house after having viewed other properties!”

The last round of cooling measures, in 2018, imposed Additional Buyers Stamp Duty (ABSD) of 30 per cent upon developers. ABSD remission, of 25 per cent, is possible only if the entire property is completed and sold within five years. This made larger developments, like Spanish Village, a riskier prospect for developers.

With the seed already planted, the Circuit Breaker in 2020 helped to tip the eventual decision to sell.

“We are a couple with three kids”, S says, “During the circuit breaker in 2020, we wished for more space, somewhere we could get fresh air while still at home. we also wished for more rooms – mainly because the three kids would have home lessons all at the same time, many times clashing with our Zoom meetings.

It was extremely disruptive, and we did not have enough rooms to run all the meetings and lessons smoothly! My boss once heard my daughter’s nursery “good morning” song as I forgot to mute my microphone immediately upon joining the meeting.” 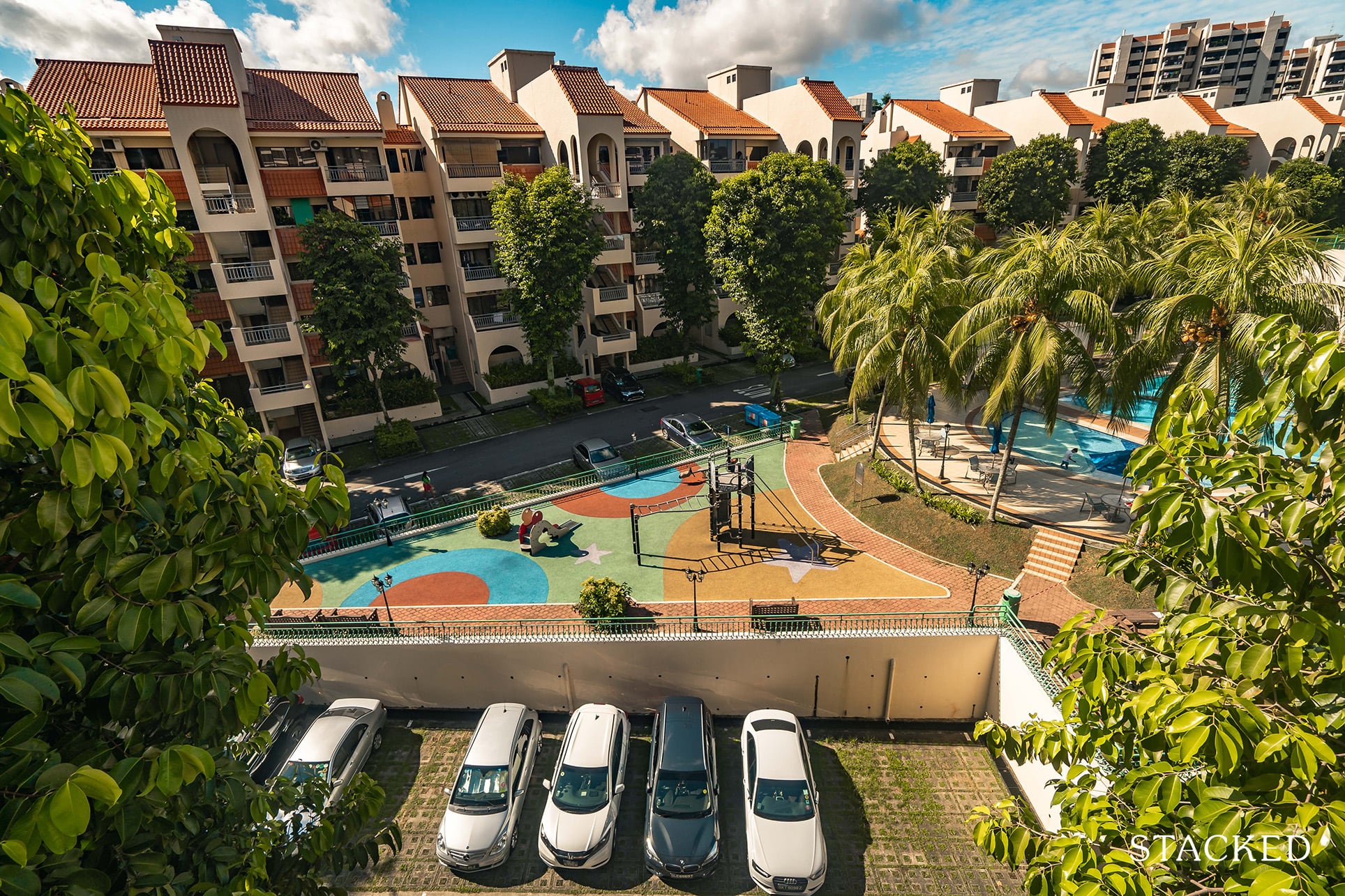 Setting the price and timeline

S decided to sell their Spanish Village unit before purchasing a new home. This was because – if they had bought a new unit first – they would have had to pay the ABSD of 12 per cent.

(Upgraders can apply to get the ABSD money back later, but they would still have to pay it first: within two weeks of purchasing the new home. They also need to sell their previous home within six months, and remain a married couple with a Singapore Citizen, to get ABSD remission).

Other than this, however, there wasn’t a fixed timeline, as it was a “spur of the moment” decision; and one that had been brewing for some years already.

“The asking price we posted was higher than what we had in our minds – so we agreed upon that quickly. As for the final price we sold our unit for, that took time for us to come to a number that we were both agreeable to.

In the end, my husband had a higher number in mind than I did but he compromised, as we found a property we liked that we did not want to lose.”

S had to make the call against some other views, saying the price should have been higher:

“Friends and family told me I could have sold it for a higher price considering it is within one kilometre of Nanyang Primary, and is not on the main road (Farrer Road is really noisy!) It’s also a corner unit and is a District 10 property…but we agreed it was time for us to move on.”

The decision turned out to be right: “Our lawyers for the purchase of our new property told us that shortly after we made our purchase, the prices of private housing went up by 10 to 20 per cent.

Considering that our current home is way more expensive than our Spanish Village unit, I think we bought it at a good time.”

Deciding on Carousell instead of an agent

At first, S had approached her previous agent, who had dealt with her upgrade from an HDB flat to the Spanish Village unit:

“She asked for some pictures, so I sent her some taken with my iPhone. We told her our asking price of $2.8 million, but she told me to be realistic as the SRX value of our home was only $2.55 million at that time.

She told me that she expected our home to take six months to move! I remember feeling discouraged after that conversation.

That weekend, on Saturday afternoon, while the rest of the family napped, I googled and found a guide to listing and selling your home on Carousell.

That was also when I found out Carousell had a property section. As I already had a Carousell account, but only used it to buy stuff, I felt there was nothing to lose at that point. I could simply use it to gauge interest in my home.

So with the same photos I sent the agent, I posted my home for sale and went for a nap. Little did I know, it would be my first sale on Carousell.”

It took only six hours before S received a reply, and they had to get packing to prepare the unit for a next-day viewing.

Dealing with buyers and their agents

S and her husband are both lawyers, and this was not their first sale. So they had industry friends they could consult, and knew what to expect.

“While the buyers brought an agent along, the agent took notes but did not make any comments when we showed them our unit,” S says, “We did make it clear at the start that we will not be paying an agent fee, but would factor a discount into the asking price as we did not need to pay the commission of 2 per cent, plus, GST to an agent.

There were no major issues and the process was smooth.”

(While there is no fixed rate for property agents in Singapore, the most typical amount for a seller’s agent is two per cent of the transaction price).

S did, however, have to add an extra line to her ad saying “No agents, please”. This was because several agents texted her asking to market her property, claiming her property specifications were wrong (they were not), demanding floor plans, etc. She found this unpleasant, which also contributed to her desire to do the sale work alone.

During the viewing, S dealt with the buyers’ questions directly:

“We only had one group of viewers. As we were a direct seller, they could ask us questions such as how are the neighbours, how is the MCST, how are the facilities, how is the experience living here, how windy is the property, do your neighbours smoke – things you would not be able to confirm with an agent.

We also communicated quite a bit through WhatsApp and the buyers could ask us questions about the property, and we would reply to them when we got to them.

The process was a lot quicker as real estate agents usually have multiple clients, and it would take time to relay the messages. After the whole process, I even sent the buyer a list of preschools in the area that we had checked out and my reviews of them.”

The buyers came by twice more – once in the evening, and another time the morning of the next day.

It’s quite common for buyers to view the property at different times – this is also something we advise, since noise levels can vary throughout the day.

In the meantime, S and her husband put in urgent leave requests to find their own home, knowing she had a serious buyer on hand.

“By Thursday, we had an agreed price, lined up our lawyers by Friday, and had an option signed by 2 pm on Friday,” S says. “One hiccup – we did not have a witness for the signing of the option papers, so we texted our next-door neighbour and he came over for the witnessing, and it was a done deal. All done within seven days of posting it on Carousell”.

S felt that dealing directly with the buyers wasn’t a major hurdle at all:

“The buyers were willing to accommodate our schedule so we were home at the three viewings, and also at the time we met to sign the option…. While some may prefer to deal through an agent, who would help to take factors such as emotions out of the equation, I felt that our experience was pleasant. It was personal, and I was sure my messages were getting through to the buyers.”

S says they should “just do it!”, but with some preparations.

“First, be prepared to interface with agents. Consider if you are willing to pay them a commission and if so, what percentage. You don’t have to pay them the full 2 per cent.

Second, if you have issues such as ABSD, mortgage lock-in periods etc, you should approach a mortgage broker. Ours quickly sorted the issues for us and was also able to clearly explain the timeline to us.

Third, contact a conveyancing lawyer to get sound advice!”

While Carousell, along with other DIY methods, is still not the norm, S suggests you approach it with an open heart and mind. As her transaction shows, you could close quicker than you expect, while saving on hefty service fees.

For more on trends and possibilities in the Singapore private property market, follow us on Stacked. We’ll also provide you with in-depth reviews of new and resale properties alike.