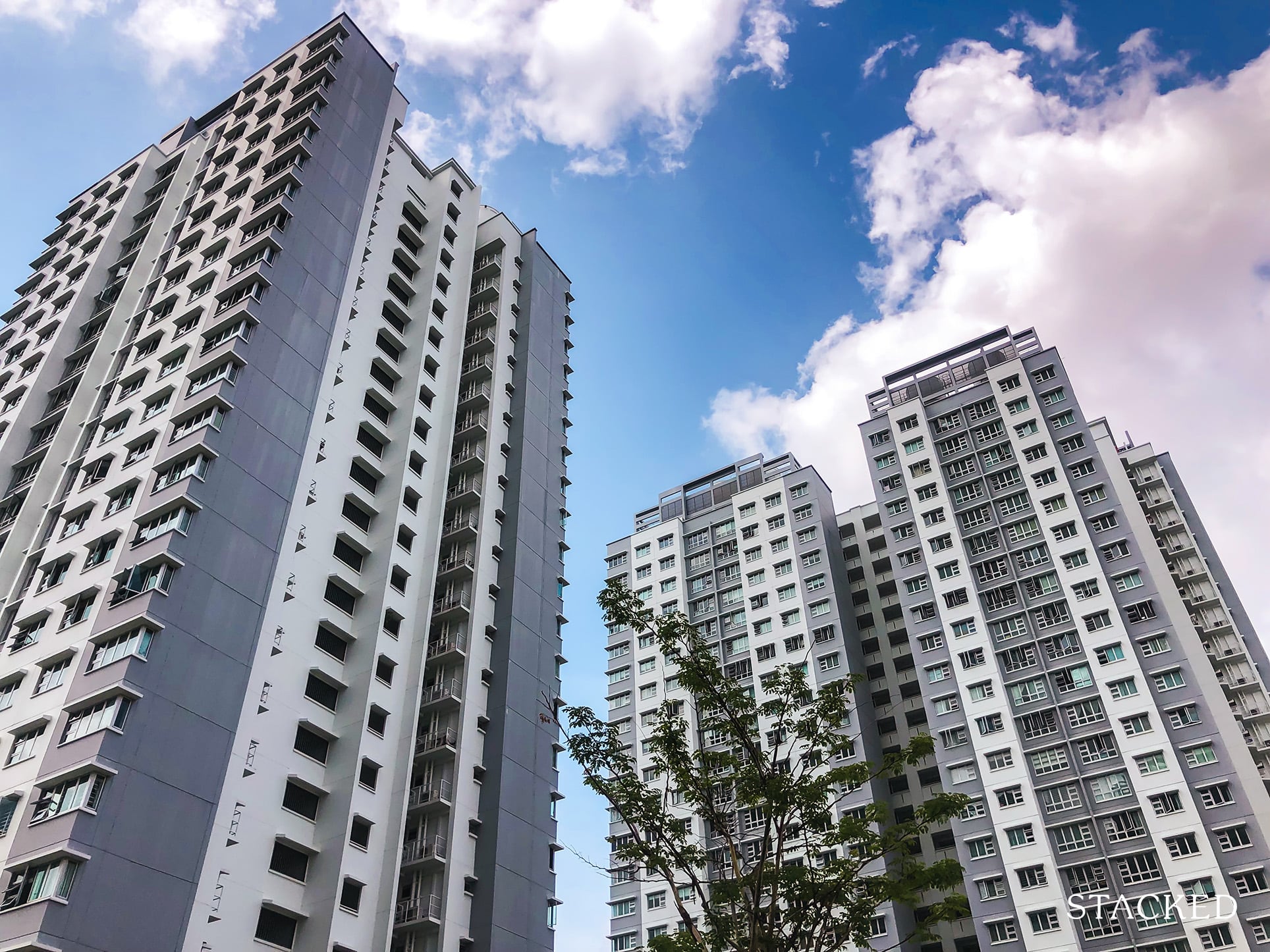 With the demand for ready-to-move-in homes during these pandemic times, many have been looking forward to 2022, where there’s a total of 36 BTO estates that will have reached the much-awaited MOP status. We recently compiled the full list, along with the brochures, some commentary on each, and the analysis of each floor plan to help you compare – spilt into non-mature and mature estates.

We understand though, that it is a ton of estates to look through. To simplify the process, we’ve picked out 10 of what we think are the ones to look out for, and their greatest features:

The Fernvale site is good if you don’t like to travel out for food and groceries. This is something of an enclave, with a good range of small shops and eateries. There’s a Sheng Siong nearby, at 417 Fernvale Link, and a food court and coffee shop across from the existing block 418.

There’s also an E-Bridge preschool near the same stretch.

For more major retail needs, however, you’ll probably need to head out to The Seletar Mall or Compass One.

There are a number of primary schools within the one-kilometre priority enrolment range: Fern Green, Sengkang Green, Fernvale, and Anchor Green Primary School. Along with good access to green spaces (Riverside Trail next to the Punggol Reservoir), this is a good spot for families.

Many units will have a good view of the Punggol Reservoir, but we do feel the inner stacks may be a bit close to the opposite block. The main road and LRT tracks may also pass closer to some blocks, which may have slightly higher noise levels.

The most significant drawback to this location would be the lack of an MRT station nearby. The Layar LRT station is practically next door though, which could mitigate the issue for some buyers.

This is a mostly smaller enclave, with small shops and eateries right downstairs. There’s also a Sheng Siong at Block 338, near the famous Buey Tahan See-Food. You’ll need to travel out for any more serious shopping though.

The stacks with 5-room flats are quite interesting here, as some offer a unique layout with a balcony. It’s also a lower-density development, which provides a somewhat greater sense of privacy. That said, we note that some stacks are closer to the TPE, and these will probably experience some noise. The inner stacks may also be a bit close to the opposite block.

Accessibility is just okay, as you need to use the Farmway LRT (about four to six minutes’ walk) to connect to the wider MRT network. On the upside, you are within priority enrolment of Springdale Primary, Nan Chiau Primary, and Anchor Green Primary School.

Note that the Canberra sites EastCrown, EastLace, and EastWave (see below) are quite close together, so share many locational benefits.

The EastCrown launch site overcomes the lack of amenities common to many areas of Canberra. While it’s true the neighbourhood is still quite under-developed, this site is next to Canberra Plaza, and near EastWave@Canberra; so residents probably won’t feel any lack of convenience.

A key selling point here is proximity to Canberra MRT, which is just three to five minutes away on foot. Despite the proximity, the site is relatively well distanced from the noise of the MRT tracks; there’s nothing passing too close to the blocks.

The MRT access somewhat makes up for the lower bus connectivity in the area (but note that sometimes, bus services are ramped up once construction is complete).

What some buyers may not like is the lack of schools within one-kilometre; Chong Fu Primary is the sole institution. There are also 1,200 units for this site, which some buyers may consider too densely packed.

EastLace is broadly similar to its other neighbouring peers here, with some key differences:

Unlike EastCrown, it is an area with shops and eateries right downstairs; we understand it has its own minimart.

This launch site is also within priority enrolment distance of Sembawang Primary and Wellington Primary, instead of Chong Fu Primary.

Note that some (but not all) stacks here may be located closer to the MRT tracks or main road, compared to EastCrown. As with EastCrown, some residents may find the inner stacks are a bit close to the opposite block.

The third in the group of Canberra BTO launches, EastWave is self-sustaining, with shops and eateries downstairs. Like EastCrown, it’s well-distanced from the MRT track, despite staying within walking distance.

However, there may be some temporary noise disruptions, from the development of the next plot over. Other than that, it is close to the other two Canberra plots; and it has Sembawang Primary and Wellington Primary schools within enrollment range.

As with EastCrown, bus connectivity here isn’t as great right now (but as we mentioned earlier, bus services can sometimes ramp up after construction is completed).

For those who work at Mapletree Business City, note that the Telok Blangah site is just a six-minute drive away. This site is also less than a 10-minute drive to the Haw Par Villa area, for those who like their culture parks.

Perhaps the biggest selling points are being on the city fringe and the fantastic views. The south-facing units offer a sea view, while north-facing units overlook the surrounding greenery.

It’s almost enough to make you forget that this is quite a dense project, with over 1,400 units; and the inner stacks seem like they’re quite close to the opposite block.

Another drawback is the lack of nearby schools, with only Blangah Rise Primary being in range.

We’re also lukewarm on the public transport options: we suppose you could walk to Labrador Park or Telok Blangah MRT stations in under 10 minutes (they’re equidistant). But those stations are barely under 10 minutes, and it is an uphill and unsheltered walk all the way.

It’s also a bit disappointing that there are no 5-room flats in the mix, so bigger families may have to look elsewhere. A pity, since many families would love that the development has its own preschool and elder care centre.

It’s been a while since we’ve seen a launch near Khatib MRT station, and this is it. This HDB site is on the doorstep of the station; and if you know this area, you’ll know it’s super convenient.

The Giant supermarket is also near this stretch – and along the nearby Yishun Ring Road, you can find many small shops and eateries, as well as a Sheng Siong. So while this development doesn’t have its own shops, it’s more or less irrelevant; almost every day-to-day amenity is already within walking distance.

As with most projects next to MRT stations, however, you have to brace for some possibility of noise from the train tracks.

Naval Base, Northland, and Pei Ying Primary Schools are all within one kilometre, which makes this good for families. Unfortunately, there will only be studio and 3-room flats launched here; so bigger families may want to look elsewhere.

This site is near the famous Ang Mo Kio Ming Chicken Rice! It’s across from Mayflower Secondary school, in a pretty subdued and peaceful area.

The development has its own shops, supermarket, and eating house; and we note there’s a Sparkletots pre-school at Block 260B. Besides Mayflower Secondary, Ai Tong, Ang Mo Kio Primary School, and CHIJ St Nicholas Girls School are all within the priority enrolment range.

Coupled with good MRT access (five to seven minutes from Mayflower MRT), this is a location that will appeal to families. For now, there are a few new blocks nearby, so it also feels less packed.

It’s a bit far from any major retail hubs though, so you should probably be ready to travel out for more heavy-duty shopping.

We’d be on the lookout for some stacks that feature unique layouts, and panoramic views of the area; follow us for further updates on a possible future insider tour.

Those who work at the One-North tech and media hub may like the location – it’s only around a five-minute drive, and the Buona Vista MRT station is just a stop away from One-North MRT.

The development is self-sustaining, with shops, eating houses, and an eldercare centre. For those with younger children, Henry Park and Fairfield Methodist Primary School are both in the enrolment range.

Some stacks and floors offer a good panoramic view, and there’s a generous distance between blocks, but a few stacks may face MRT track noise and road noise. There are no 5-room flats, and a count of over 1,100 units may be a bit too dense for some.

With a desirable location like Toa Payoh, it doesn’t take much to make this site top the list. This is also going to be a self-sustaining development, with its own shops, supermarket, and eatery.

The highlight here would be the walking distance to the Caldecott and Braddell MRT stations; transport-wise this is one of the best BTO sites. Note that Braddell on the North-South line is just four stops away from Orchard MRT, while Caldecott also provides access to the Circle Cline (CC).

There’s also a lack of new HDB blocks in the area, at least for now; so it forms a quiet enclave, with good panoramic views and distances between blocks.

Marymount Convent School, Keng Cheng School, CHIJ Primary are all in priority enrolment distance; but unfortunately for some families, there are no 5-room flats.

For more on updated and curated picks in the Singapore property market, follow us on Stacked. We also provide in-depth reviews of new and resale condos alike.

The prices those greedy buggers are asking for TPY Crest are insane. Would much rather be looking at the Peak which costs similar.

I think the downside to The Peak would be that it’s got less internal living space. To each their own 🙂