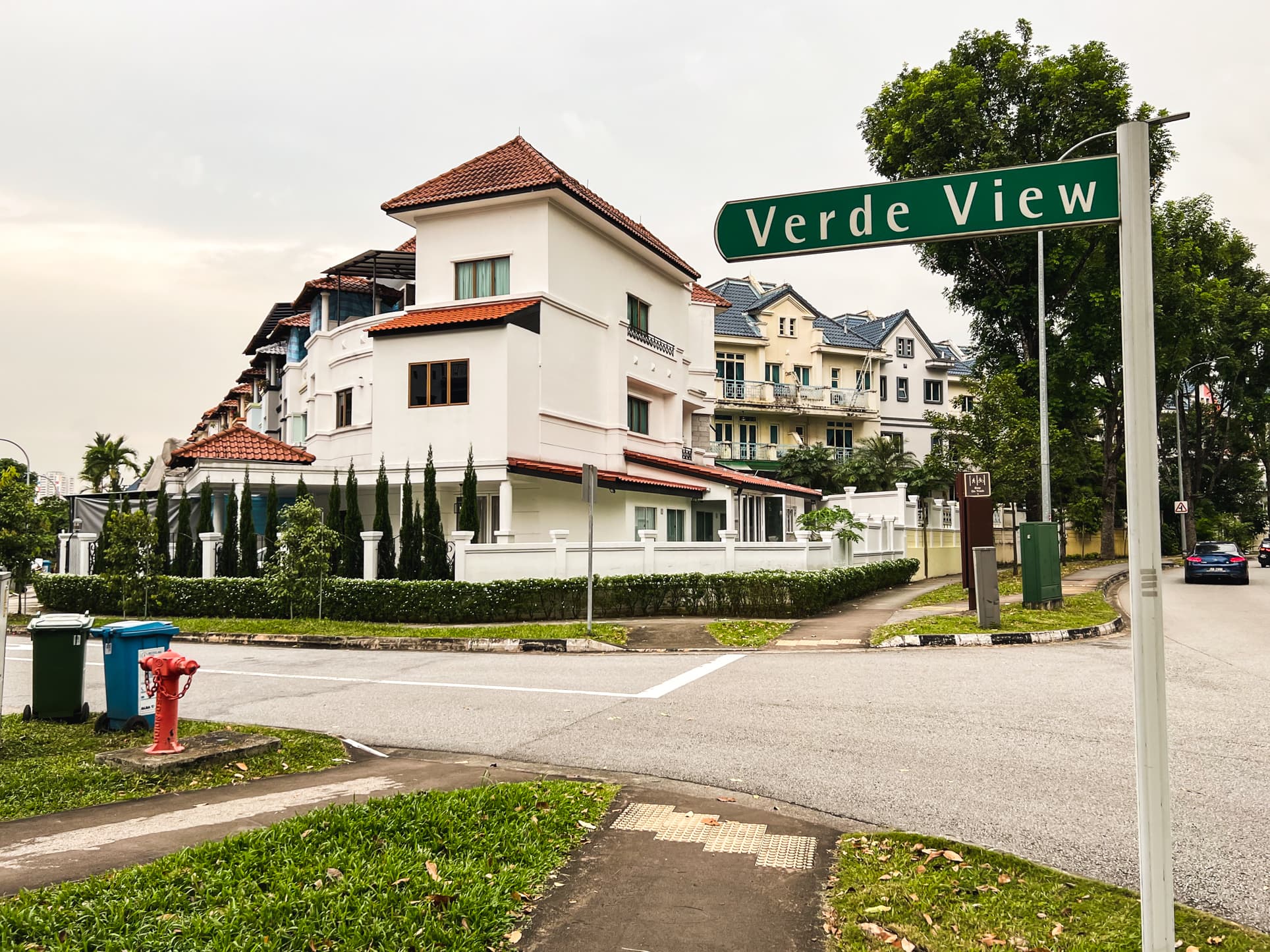 I’d been meaning to check out Villa Verde for some time because well, for a landed house in Singapore, it’s “cheap” (or shall we say less expensive?) Coincidentally, someone left a comment on my article about the houses at Loyang View, asking for a tour of these houses (which are located at 1 Verde Avenue) so off to the North West I went.

Like Loyang Villas, Villa Verde is massive: it consists of 515 3-storey terrace houses, developed by Keppel Land in 2000 (or 2002, depending on which property site you visit), with 99-year leases that began in March 1997. At the time of writing, asking prices at Villa Verde ranged from $1.99 million to $3.15 million for a corner terrace house. According to the data on SRX, all the sales in 2022 have been above $2 million, which is an increase from 2021. (In 2021, all the sales but two were under $2 million, with one property even going for as low as $1.32 million. Note that when we mentioned Villa Verde in our “cheapest landed homes in Singapore” article last year, the transacted price was $1.3 million.)

Click here to see the tour of an inter-terrace and here to see a corner unit (which has an unblocked backyard that overlooks the Pang Sua Park Connector.)

The inter-terraces here are approximately 1,600+ sq ft in plot size with 3,000 sq ft in build-up area, whilst the corner units are larger, with some going up to almost 4,000 sq ft in build-up area. As these houses are quite old, most would have undergone some form of renovation, so I won’t go into too much detail about the layout except to say that, being an older estate, the room sizes are decent, unlike some of the newer leasehold properties such as Victoria Park Villas. Also do note that some of the houses have split levels between the living and dining.

The estate is bounded by the Pang Sua Park Connector, the KJE, Regent Secondary School, and Choa Chu Kang stadium, so some have unblocked backyards, and others are noisier than you’d expect. Click here to see a bird’s eye view of the estate from above – it’s at about the 4:00 minute. Most of the houses are North-South facing, which is the preferred facing in Singapore for ventilation, but some on the left and right side of the enclave (i.e. the ones that face the park connector and stadium) have the less desirable East-West orientation, something I do not envy what with Singapore being a furnace these days.

The Park Connector is larger than the one at Holland Grove View. It’s large enough that it actually has 2 pedestrian paths on one side, with benches for people to sit. And with land that is not built-upon the opposite side of the canal, you do have remarkably clear views of the surroundings. However, it is highly-utilised and, according to the road signs, some people may organise noisy music parties there?

The houses which line the KJE, have nice green views of trees, but the trade-off is the higher levels of background noise – similar to what I had seen at Haus@Serangoon Gardens last week. 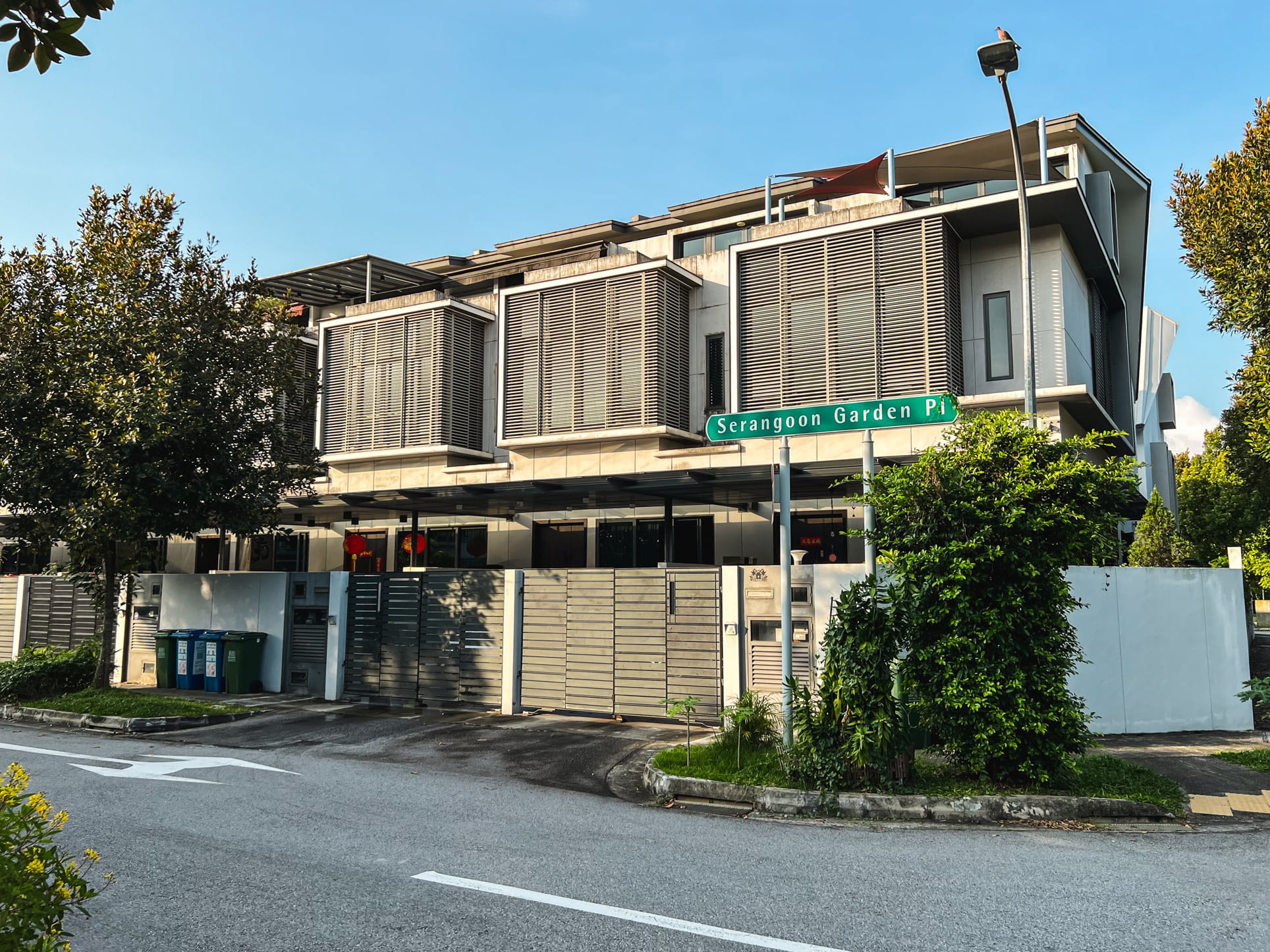 Property StoriesTouring Haus@Serangoon Gardens: Bustling Landed Living Near A Plethora Of Amenities For About $3 Million

The Estate as a whole

Last year, I visited Windermere, an Executive Condo just across the road from Villa Verde. In fact, I remember standing on the balcony of the penthouse and pointing to the estate, with the agent informing me that prices had been rising at Villa Verde. When I was at Windermere, I felt that living in this part of town was quite spacious and less built-up than the rest of Singapore, and would be a nice retreat from busy city life.

Sadly, that’s not the feeling I had at Villa Verde. On the contrary, the whole estate felt rather cluttered to me. I’m not sure if it’s because the residents are super fond of gardening and there are pots everywhere, or because there was quite a lot of traffic in the estate. I saw several large European cars which were going about the roads quite aggressively. I enjoy growing greens myself, but the number of pots and plants on the pavements around Villa Verde made me wonder about dengue, and, true enough, Villa Verde is apparently a dengue red zone, with 33 cases in the last 2 weeks.

Like Macpherson Garden estate, the word that came to mind when I visited Villa Verde was “gentrification.” You can see several lovingly restored houses that wouldn’t look out of place in the English countryside but there are also several in need of a bit of sprucing up.

So as not to offend anyone, unfortunately, I can’t show the houses which I think need sprucing up! But they’re there.

Unfortunately, the public transport network here isn’t the best. The nearest MRT station is Yew Tee, which is about 1 km away (a little too far to walk in the heat if you’re in your office gear.) However, there are several bus services on the main road outside the estate that bring you directly to Lot 1 Mall (Choa Chu Kang MRT) and Bukit Panjang MRT.

If you drive, it’s easy access to the AYE, PIE, and BKE. Having said that, bear in mind that traffic can be heavy. When I drove to the area to visit Windermere last year, it was when the Causeway was closed and the drive was smooth and easy. At that time, I did wonder what it’d be like when the Causeway re-opened. This year, I visited Villa Verde on a Saturday afternoon, and there was a jam getting there and coming back. (According to the road signs, the heavy traffic was due to congestion at the Causeway.) So, although the area is a little undeveloped compared to the rest of Singapore, it’s not quite a peaceful estate away from the hustle and bustle of the city that one would envision.

If you’re considering moving to this area, I’m pretty sure it’s not for the shopping options. However, Pang Sua Park Connector, which is just next to Villa Verde, will lead you to Hillion Mall, Bukit Panjang, and Junction 10. It’s also a great place to go for a walk after meals.

There are also several parks in the vicinity, such as Stagmont Park, Limbang Park, and Choa Chu Kang Park, which are larger than the 2 green spaces by Villa Verde (Villa Verde Park and Verde Green.)

Note: An extension of Villa Verde Park, which is just next to the houses, has also been planned and is set to complete this year. Currently, it has a playground and fitness equipment. The extension will increase the park’s size from 0.9 ha to 2 ha and will include a dog run, an allotment garden, a sheltered seating area, and a community space where group activities can be conducted. (If you’re wondering how big Villa Verde currently is, let’s just say NParks describes it as a “cosy park” on their website.)

If walking is too placid for you, Choa Chu Kang Stadium is just a stone’s throw away.

Note: Sungei Kadut Industrial Area is nearby. Some people don’t like living next to industrial areas, so I thought I’d point it out!

There are 2 Childcare Centres within 500m, 3 kindergartens  and, according to yoursingaporemap.com, 4 primary schools within 1 km of Villa Verde (although for landed houses, this can depend on exactly where your house lies in the estate, so do check before you buy.) The 4 schools are Kanji Primary, Yew Tee Primary, De La Salle School, and Teck Whye Primary. Pioneer JC is also close by and students can walk to school via the Park Connector.

So now that we’ve seen the estate, how do you find it? Personally, it’s too busy for me, so next week we’re going to view somewhere that is closer to nature and hopefully quieter!

Hi
Would you like to talk about yunnan garden estate ?

Hey Rachel! Will check out the estate, thanks for your feedback!

It’s a gem (at least when the prices were lower) and most houses there are about a 10 min walk to the MRT. Not to mention being in a housing estate means proximity to coffeeshops etc.

Thanks for sharing your insights!

The black and red house used to be my church when i was young 20 years ago!

Loyang garden estate better, the expressway at villa verde (rather, a huge flyover or viaduct) is a true monstrosity. And they are expanding the expressway interchanges currently!.

Would you guys be interested in looking and touring the Pavilion Estate? I would love to see your thoughts on that area

Hello! Yes we’ll check that out too! Thanks for your feedback!