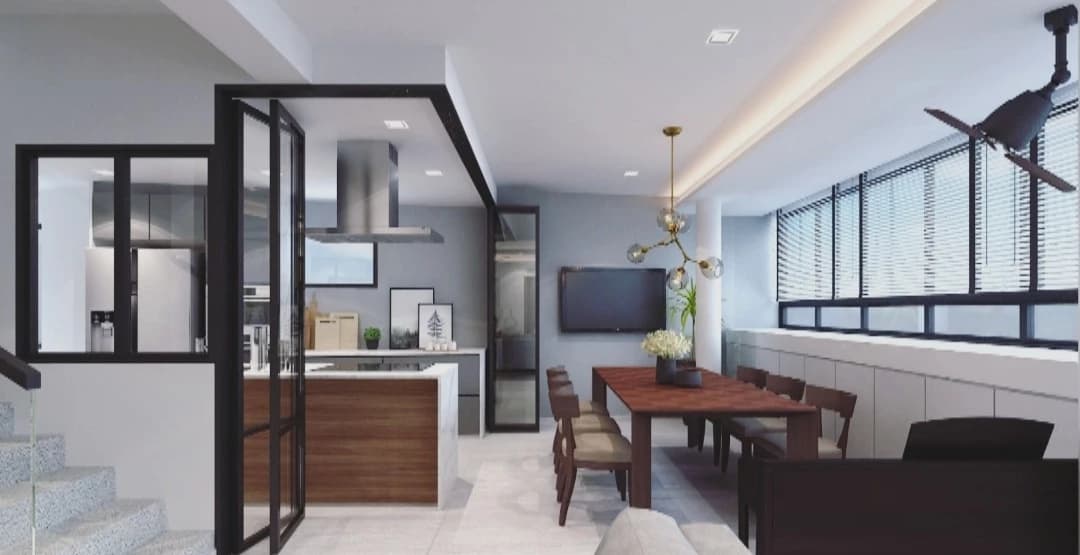 Renovations are a common headache for first-time home buyers. If you’ve talked to a contractor or interior designer, you probably know how… unpredictable the costs can get. And having pets adds yet another layer of considerations. This week, we talk to a couple about their smart approach to renovating with pets:

Picking a property with the right possibilities

When D and her partner decided on their home, they already knew they wanted a unit that could accommodate an open concept. Her main requirements were space and light.

“The space must be well thought out. I saw many new developments that did not even have space for a kitchen, or a lot of ‘wasted’ space in the form of rooftop gardens for penthouses,” D says. “If we are unable to install awnings on these spaces because of facade rulings by MCST, they typically end up a total waste of space due to our crazy heat, and they’re a lot of work to maintain, because they are exposed to the elements.”

Natural light was also a priority, as this is one of the main reasons to use an open concept. D says:

“There must be enough light to open up the space. And if windows are tinted strange colours like green or blue, with MCST not allowing us to change, then it is a big no-no.

In this case, older and small projects with no MCST office in-house are typically more relaxed about facade issues, especially if current units have already changed out the original facade fittings.”

You can see this from the outside of a development – if you already see a lot of different window set-ups, you can be reasonably sure the MCST will allow it. For new launches, it’s best to ask the agents how residents will, or won’t, be allowed to customise the windows. Opening up the space also meant looking for configurable layouts. D notes that: “Some units do not allow for this to happen. This happens when bedrooms are not separated by the same wall.”

The floor plan of the unit will also mark out load-bearing walls. These types of walls can’t be moved, so some layouts are harder to customise than others. If there’s no floor plan, ask the seller or your contractor; they’ll have an engineer work it out for you.

“We decided to knock through as many rooms as possible,” D says, “So that the space could feel bigger, since there are only two of us; and we did not need as many separate bedrooms. Initially, this home had four bedrooms, but now there are only two left.”

Note that the decision to reduce the number of rooms isn’t for everyone. Some investors might avoid this, as it restricts the number of unrelated tenants; it could also affect subsequent family buyers, who may prefer having four rooms to two. But of course, if it’s for your own stay, it should be optimised for your comfort.

Going it without loans

Interestingly, D and her partner did not use any renovation loans to finance the works. The cost was paid by the sale proceeds of their previous home. Likewise, they expect the cost of renovations to be covered if/when the current home is sold. This saves the usual three to five per cent interest rate on a reno loan (which, at a cap of $30,000 from all banks, is not exactly high anyway).

So if you’re upgrading, it’s worth thinking about the renovation costs when setting your price tag!

There’s a difference between the two. In theory, the ID is supposed to conceptualise the design, come up with themes, and develop the overall plan of renovations. The contractor’s role is to execute the plans, by getting the right mix of sub-contractors like carpenters, electricians, etc.

In Singapore though, it’s common to find overlaps. For example, some Interior Design firms also have qualified contractors, and some contractors have designers on their staff.

“Most of the time we use a trusty carpenter that we’ve been working with for the past 15 years. He doubles up as a contractor for my projects,” D says, “But for our last unit, as such a complete overhaul was needed, and it had a lot of strange corners and pillars we needed to hide.

We engaged an ID that he worked with so that we could still have him do the carpentry. The ID helps visualise the design. Some contractors/ carpenters can also do this, but they may not be able to come up with 3D renderings, which was very useful in helping us visualise our ideas.

We actually tried to work with another ID from a brand name firm, but he wasn’t as precise as the one we chose in the end. The ID we chose operated out of a neighbourhood shop space, but she itemised her entire quotation, and kept us updated on details, without bugging us about every hiccup or issue she faced along the way.

Her experience definitely trumped the young man from the more fashionable ID firm. Note though that she wasn’t cheaper than the branded ID firm!” 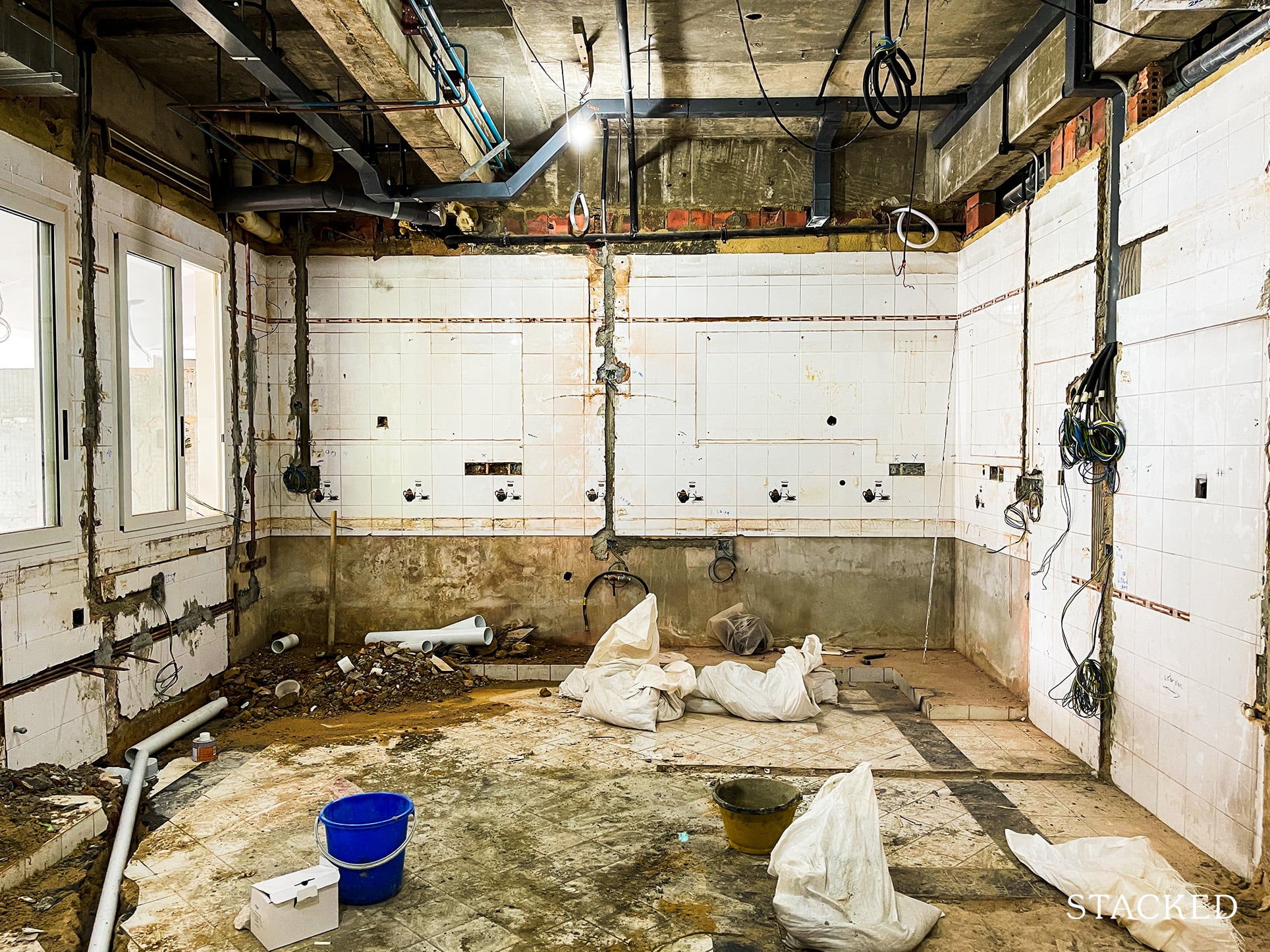 InvestmentRenovating Your Investment Property: Do’s And Don’ts You Absolutely Must Know

Carpentry is expensive, but it is one of the most essential parts

D says that nothing cost the least, but carpentry did cost the most.

“We were not surprised by this as we required a lot of carpentry for storage and for hiding corners and pillars that was tricky to install and build.

I blocked up part of a strange sloping wall in my bedroom with my walk-in closet, so that it could look regular again.

My carpenter built a door at the back of the closet for me to access the area I hid, and it is now a place to store luggage and other bulky items I don’t need.”

It’s always ideal to have regularly-shaped rooms; but if you don’t, this is where good contractors can shine. Look for creative ways to use little nooks and crannies. However, if your budget is tight, you may want to focus on methods other than carpentry (especially in this Covid-19 era, where more expensive local carpenters tend to be called in rather than Malaysian counterparts. The quality of work is comparable!)

Picking renovations with pets in mind

D and her partner knew they would have at least two dogs at any one point. This led to some different considerations, in renovation choices:

“One major thing we would look at would be flooring,” D says. “It must be easy to maintain, and more importantly, it needs to be able to give the dogs some traction so that they don’t lose their footing. In that sense, marble is probably the worst, because even though it is cooling, it takes on stains very quickly and it doesn’t provide enough grip, especially for my more senior dogs.

Our current tiles not only give them the traction they need, but the colour also hides the fact that the floor is likely covered in fur during shedding season very well”.

Contractors that we spoke to also suggested certain forms of textured vinyl, which can also provide traction and are easy to clean. However, this doesn’t provide the same aesthetic feel as higher-end ceramic tiles.

Another area of concern was the stairs, as well as barriers:

“Our stairs also need to be carpeted, so that they can go up and down the stairs safely. This means professional carpet cleaners need to be engaged every now and then too. Pet safety can also include making sure your home has window grilles or mesh, especially if you have cats, or barricades at the front door, if you have escape artists for dogs.”

As an aside, pet owners often assume ground floor units are safer (especially for cats or other animals that like to climb onto windows). However, keep in mind that it’s much easier for pets to run out of the home, the moment the front door is opened.

The best set-up is usually a ground floor unit, where there’s an enclosed lobby. This way, your dog won’t be able to lead you on a chase around the whole condo (or more dangerously, get onto the road).

What would D change if she could?

The overall renovations were smooth, with D and her partner being able to move in on time, and only after two moves (well planned, as most home buyers take about three or four moves!)

“I would probably have protested using smart switches a bit more. I don’t find myself inclined to use the app to operate my appliances; the blinds tripped my entire circuit a few times. But the switch panels do look quite cool. It can however be frightening if my husband accidentally controls appliances remotely while he is at work and I am home. Strange to suddenly have lights turn on, or the washing machine start itself…”

We guess sometimes, smart home features might be novel than practical. But on that note, pet owners might get some extra mileage out of the right smart home features – such as surveillance for pets while at work, or being able to turn on air-conditioners from the office (important for some dog breeds, in Singapore’s tropical heat).

For more home buying and renovation tips and stories, follow us on Stacked. We’ll also provide you with the latest reviews of new and resale properties alike.