Property Stories I Moved From A Landed Home To An HDB, And I Wouldn’t Go Back Given The Choice 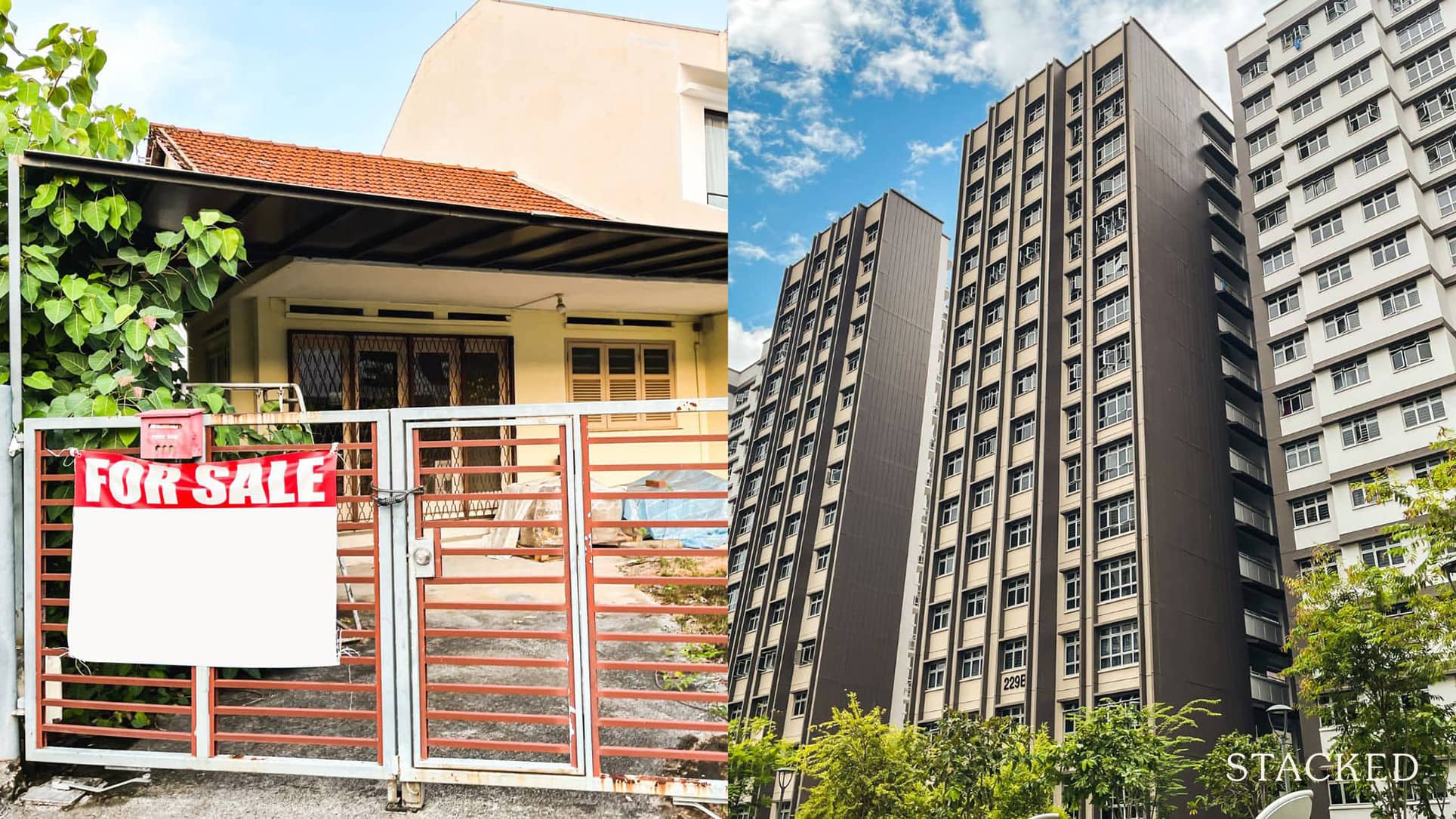 A while ago we interviewed someone who right-sized from a landed home, and stayed in an HDB flat for a time. This time, we spoke to another person who moved out of a landed home, who had a different experience. This homeowner had an enlightening year of HDB living, before moving to a condo; and she says she wouldn’t go back to a landed home even if given the choice. Here’s her take:

Moving out of a house that’s “served its purpose”

G used to live in a three-and-a-half storey semi-detached house, at the end of a cul-de-sac. She had lived there with her family since the 1990s. She says the front yard was big enough to fit three cars if you got creative, and there was a long pond at the side of the house and a grassy backyard.

There were, however, inconveniences as well. G says that “It was about a 500 metre walk from the nearest bus stop. There was no lift and we didn’t end up building one; either didn’t have family that required the lift, or didn’t stay till the age they needed a lift.”

In any case, G’s father decided to sell the house after it had “served its purpose.” G says:

“He bought the house so that we could be within the two-kilometre radius of the school he was hoping to get us into*. We eventually graduated and my parents also semi-retired, and there wasn’t much to do near our house; nor did other family live very close by.

Over the years as our needs changed and we moved into different stages of life, and only one parent continued driving. My sister and I preferred public transport to driving; the walk in and out of the street was time consuming and hot on most days.”

G says there were thoughts of selling for many years, but the desired price indication never materialised. When the house was finally listed, they weren’t in a rush to move, and it took almost a year to sell.

The family got an offer the day before the Additional Buyers Stamp Duty (ABSD) was going to kick in, and they took the offer on the realtor’s advice; this was out of concern that buyers would turn more conservative once the ABSD took effect.

Interestingly, this is the opposite of some reactions we witnessed, on the day ABSD was passed. Some property owners decided to pull their listings, on the basis that the ABSD would make it harder for them to own multiple properties in the future.

The move out of the landed home was quite painful, and involved throwing out an impressive amount of things:

“We sold or left behind 95 per cent of our furniture. Not even the family cherry wood dining table since my grandfather’s era made it.

We kept some sentimental pieces like side tables, vintage mirrors, and lamps. We stashed aside 30 per cent of our crockery and dining sets, as the kitchen would be much smaller. Even now, three years later, some of the sets are still in boxes as we have no space for them.

Furniture had to go due to space, all our childhood books and toys were given away. But we compromised on packable or stackable items like dining ware and clothing. We could not be too sentimental with bigger items sadly.”

*As of 2022, buyers now focus on a one-kilometre distance to the desired school, as this is needed for priority enrolment in Primary one.

G and her family moved to a 5-room flat with a balcony. It was a four-point block, with the unit being around 1,100 sq. ft. She says that:

“The flat had not been renovated in a long while, and the old style of kitchen and toilets were still kept: one toilet was dark maroon and the other was black. There were two bathrooms, one was in the kitchen. There was a trash chute inside the flat instead of outside.”

As an aside, some homeowners still prefer this style of flat, where the garbage chute is inside the unit – it spares them from having to bring the rubbish outside to dump. Conversely, some homeowners loathe it and seal it up, claiming it brings pests.

(Our opinion: seal it up if you’re on the ground floor or lower floors, as such units are more prone to pests).

However, there were conveniences to HDB living as well. G says the flat was very close to the MRT, and it was just the third block from the MRT exit. There was also a mid-sized Chinese supermarket, at the block next door.

The environment was in stark contrast to landed living:

“It took a while to get used to seeing neighbours when you open your front door,” G says, “and the sound of ambulances, sound of the lift, etc.”

“Within the landed home, usually you have a floor to yourself and the kitchen was on a separate floor from the living room; you don’t have to see other family or guests if you just want a snack or hot drink.”

On the flip side, G says there were no food offerings near the landed home, so it didn’t compare to the convenience of the HDB flat:

“In the landed area we stayed the nearest McDonald’s was over one kilometre away. We’d end up ordering in and the costs adds up. Not to mention everyone will have to pick one restaurant to eat from.”

One element of landed living that was missed, however, was the availability of easy-to-find and free parking for visitors.

“The connectedness of HDB living is unparalleled,” G says. “First and most importantly, the sheltered walkway from the HDB block to the MRT is a godsend when it’s raining or scorching.”

The same sheltered walkway also meant access to nearby coffee shops, come rain or shine. In addition, there were multiple gyms and yoga studios within walking distance – G says this saved her a bus or train ride, and helped with issues like post-workout shower inconvenience.

As for the inconveniences of HDB living, G says that:

“The noise we got used to after a few months, it was actually interesting to hear the noises as it makes you feel like you’re in a bustling area, haha! When dealing with crowds, we would buy takeaway food instead of eating at the coffee shop itself.

What took a lot of getting used to was having neighbours and their visitors walk past our front door, and almost being able to hear their conversations whilst we’re watching TV. And sometimes we can hear neighbours above us having arguments, slamming doors, or playing drums. Oh and cigarette smoke!

As a family of non-smokers that was the most frustrating thing, as we could smell it from our kitchen or living room. We’d have to shut the windows. Eventually, we bought an air purifier.”

Nonetheless, HDB living gave G a “better feel for the neighbourhood,” and she noticed that:

“Interactions with other people happen more often, due to the proximity and frequency of leaving the house for food. Particularly when walking my dog. I tend to see at least one to two other dog owners at any time of the day, compared to quiet empty streets in the landed enclave.”

Not going back to a landed property

G says that, even given the choice, she wouldn’t go back to the landed property:

“Perhaps based on where I lived, there was not much connectedness. But now with the food, transport, and lifestyle options, it would be hard to imagine giving it all up. Also, a landed property is challenging to maintain. With a condo or HDB, the façade is always cleaned for you.”

This is a sentiment that’s increasingly common among older Singaporeans. Besides the issue of stairs, there are concerns over mental health (landed enclaves tend to be less communal and more isolated), and the need for easier access to clinics, barbers, affordable dining, etc. as one ages.

For those about to make a similar transition, from landed housing to a flat or condo, G has this to say:

“Downsizing your belongings will be the biggest challenge. When viewing the kitchen, closet, or bathroom of the prospective flat, try to imagine all of your must-keep items fitting in these areas.

Also if your family is the type to host a lot, that would factor into the size of the living room you require. Check if your living room or kitchen can be modified to be larger for parties or events.

If you have pets, also account for them needing to be comfortable with the change in size.”

For more homeowner journeys and experiences, follow us on Stacked. We also provide in-depth reviews of new and resale developments alike, so you can make a better-informed decision in the Singapore property market.