The “first-mover” theory holds that, if you’re the first to buy in a yet-to-peak area, you’ll see better capital gains. In theory, you would be buying before property values start to spike, in a classic buy-low-sell-high move. But depending on who you ask, you’ll get contradictory opinions: some property investors truly believe it, others will point out the challenges of it – what if the area doesn’t end up fulfilling its potential?

With Lentor Modern launching this weekend, there’re bound to be many of you wondering if being a first-mover there will be rewarding in the future.

As such, we’ve looked for various similar scenarios in the past, to see if we can glean any information from it. Here are some comparisons, as to how being a first-mover has worked out for some of the developments below:

Tree House makes for an interesting study because when it launched in 2010 it was the first condo in the area for quite some time. The surrounding competition at that point, Cashew Park Condominium and The Dairy Farm, were built in 1983 and 1989 respectively. It is also quite unique with its vertical garden, and has won multiple awards including the Guinness World Record in 2014 for the world’s largest vertical garden. More amazingly, the developer CDL acquired the land for only $280 psf ppr back then. It’s a stunning contrast to the most recent land bids at Dairy Farm, as it reached $980 psf ppr for the Dairy Farm Walk site in early 2022.

The project did well, selling out from in July from its launch in May 2010.

But let’s see how the Tree House condo has fared. We’ll use the two nearby condos – Cashew Park Condominium and The Dairy Farm – for an initial comparison.

As you can see from the above, Tree House was already priced significantly higher than these two counterparts. As a new launch, it had a much wider range in $PSF compared to Cashew Park Condominium and The Dairy Farm. Its average was also significantly higher – $835 psf compared to the $683 and $687 psf of both developments. Also, it wasn’t just costlier on a psf basis, the average quantum was also notably higher e.g., $973,556 for Tree House versus $858,333 for Cashew Park.

This price difference was despite Tree House being a leasehold condo, and the other projects being freehold (The Dairy Farm) and 999-years (Cashew Park).

Unfortunately, this may have hampered Tree House’s performance before we even compare it to later launches

*Note: There were no transactions for Cashew Park, so we couldn’t make comparisons to it

As of July 2021 to June 2022, note that Tree House prices were lower than The Dairy Farm, despite being much pricier at launch. This could be due to a wide range of reasons, including the introduction of ABSD in 2013. It could also be due to Tree House’s leasehold status, in comparison with neighbours, and perhaps the trend of looking for bigger sized units because of the pandemic over the past 2 years.

Still, the big question is, did Tree House show first mover advantage compared to condos that came after it?

Foresque Residences, Eco Sanctuary, and The Skywoods all came after Tree House. As we might expect, these headline developments were all priced higher than Tree House at launch.

The results are generally inconclusive. With regard to Foresque Residences, we can see the price gap narrowed over time; conversely, the opposite happened with regard to Eco Sanctuary. For The Skywoods, the price gap has remained more or less unchanged.

There doesn’t seem to be a clear indicator that Tree House has any sort of first mover advantage, in relation to its pricing.

(Also, while it wasn’t our intention, the price movements here may inadvertently be showing the advantages of a freehold development. Note that the freehold The Dairy Farm has overtaken every development except Skywoods in price psf).

Now Tree House condo may not really be the best comparison given that unlike Lentor Modern, it isn’t an integrated development, and neither is it near an MRT station. Like Tree House, Optima @ Tanah Merah was well-received during its launch – perhaps even more so. There was reportedly a queue outside before the public preview, and all the units were sold in just 3 days.

So Optima @ Tanah Merah makes for an interesting study because it’s next to the MRT station, and there’s a large cluster of condos nearby to compare it against. Note that when Optima was launched in 2009, it was priced significantly higher than nearby counterparts – about 20 per cent higher in average price psf.

Optima was even priced much higher than Casa Merah, which was only about two years younger in terms of loan tenure; so this was a somewhat expensive development from the get-go.

Optima has performed well as a development

Optima maintained its lead against surrounding developments that were there at its time of launch (2009). At an average of $1,298 psf, it is still priced higher than its neighbours that were there at time of launch. The 484 sq ft units that were sold quite highly at around $1,000+ psf have recently gone for $1,300+ psf. A recent example is one on the 2nd floor which achieved an annualised gain of 2.3% over 13 years.

The condos that surpass Optima in price psf (Village East, ECO, The Glades, and Urban Vista) are all newer developments which came later. Also, despite Optima being expensive at launch, we note there are just 14 unprofitable transactions, versus 171 profitable ones.

So from the perspective of an individual development, Optima has shown excellent performance. However, there are other condos near it that have shown equal or better gains.

East Meadows (an old leasehold condo from 1981) saw its price psf increase 61 per cent, from $638 to $1,029. In contrast, Optima saw just a 55 per cent increase, from $837 to $1,298. Also, Grandeur Park Residences, which was launched much later than Optima, has also maintained a high price gap with resale counterparts.

Optima maintained and even slightly widened its price gap in the run-up till 2013, when ABSD was introduced. After this point, Optima fell in line with the overall market.

(This may have something to do with rental; condos around the Tanah Merah area were – and still are – popular among landlords who want to cater to workers at Changi Airport, as the interchange is located here. The introduction of ABSD significantly diminished the number of aspiring landlords).

Surrounding newer developments, with the exception of East Village, have maintained higher prices than Optima, as they had at launch. But similarly, older developments haven’t managed to keep up with Optima either.

In particular, note that Grandeur Park Residence started off much pricier than Optima, and has maintained that price gap.

While Optima @ Tanah Merah has performed well overall, it’s still tough to determine whether “first mover advantage” has much to do with it.

Now that we’ve tried one which is in an area of really old condos, and one that was launched next to an MRT station, let’s look at an integrated development comparison.

Duo Residences launched in a tough year (2013), when the market was still far from adapted to cooling measures. Nonetheless, it’s an interesting study as it’s mixed-use, and is surrounded by mostly other 99-year leasehold projects. 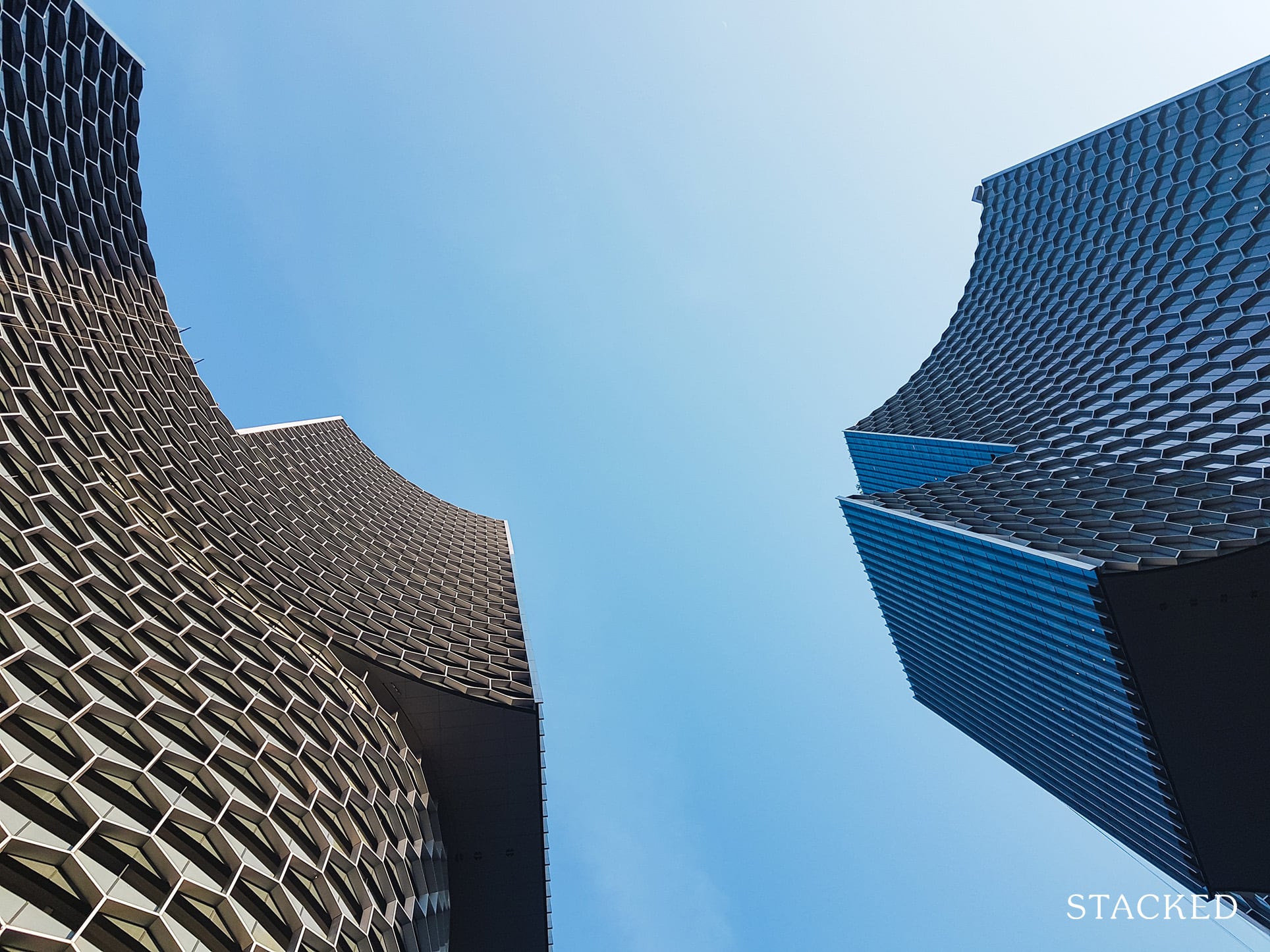 Condo ReviewsDuo Residences Review – All you need to know

Note that the much higher price at launch, compared to surrounding projects, was often a matter of age. Textile Centre, for example, goes back to 1977.

In terms of comparison, the price gaps have stayed more or less the same since 2013. Note that the newest development, City Gate (July 2014), is still slightly cheaper than Duo Residences; but it also launched at a pretty low price (prices was on par with Concourse Skyline, an older resale development, at the time of launch).

Overall though, Duo Residences doesn’t seem to show any significant first mover advantage. In fact, around 25 per cent of transactions at Duo Residences appear to be losing transactions; and the newer City Gate appears to be doing better (City Gate prices have surpassed their last peak in 2020).

Mind you, this may be due to Duo Residences being a more high-end development with larger units. The high quantum may account for the seemingly stagnant price movement. Also, perhaps it is still too early to tell, as Bugis has yet to be fully transformed. With the opening of Guoco Midtown, the redevelopment of Shaw Tower, and the completion of The M, the area will be significantly uplifted once everything is in place.

At launch in 2012, Watertown was priced around 32 per cent higher than the existing Treasure Trove. This is largely on account of its integrated development status, which is considered to provide more amenities.

Looking at the more recent price movement, we can see Watertown is clearly ahead of its neighbours:

Watertown may have cost a third more at launch; but in recent prices, it has widened the PSF gap to about 60 per cent more.  On top of that, Watertown managed to fetch higher prices than even the newer Parc Centros.

While all three condos have broken past their previous highs, it seems clear that Watertown remains in the lead. This may provide some credibility to the argument of it having a first mover advantage.

Ultimately, first mover advantage seems to be a concept confined to theory; it belongs with statements such as “freehold has better en-bloc prospects”. It’s hard to prove it in an empirical sense: there are many factors that determine pricing, and quite often issues such as lease, location, or even the market at the time of launch can have a bigger impact.

It may be these factors, rather than first mover advantage, that account for the good performance.

For more on home buying strategies, as well as in-depth looks at new and resale condos alike, follow us on Stacked.