Property Stories I Regret Selling My HDB To Upgrade To A Condo: 4 Homeowners Share Their Story 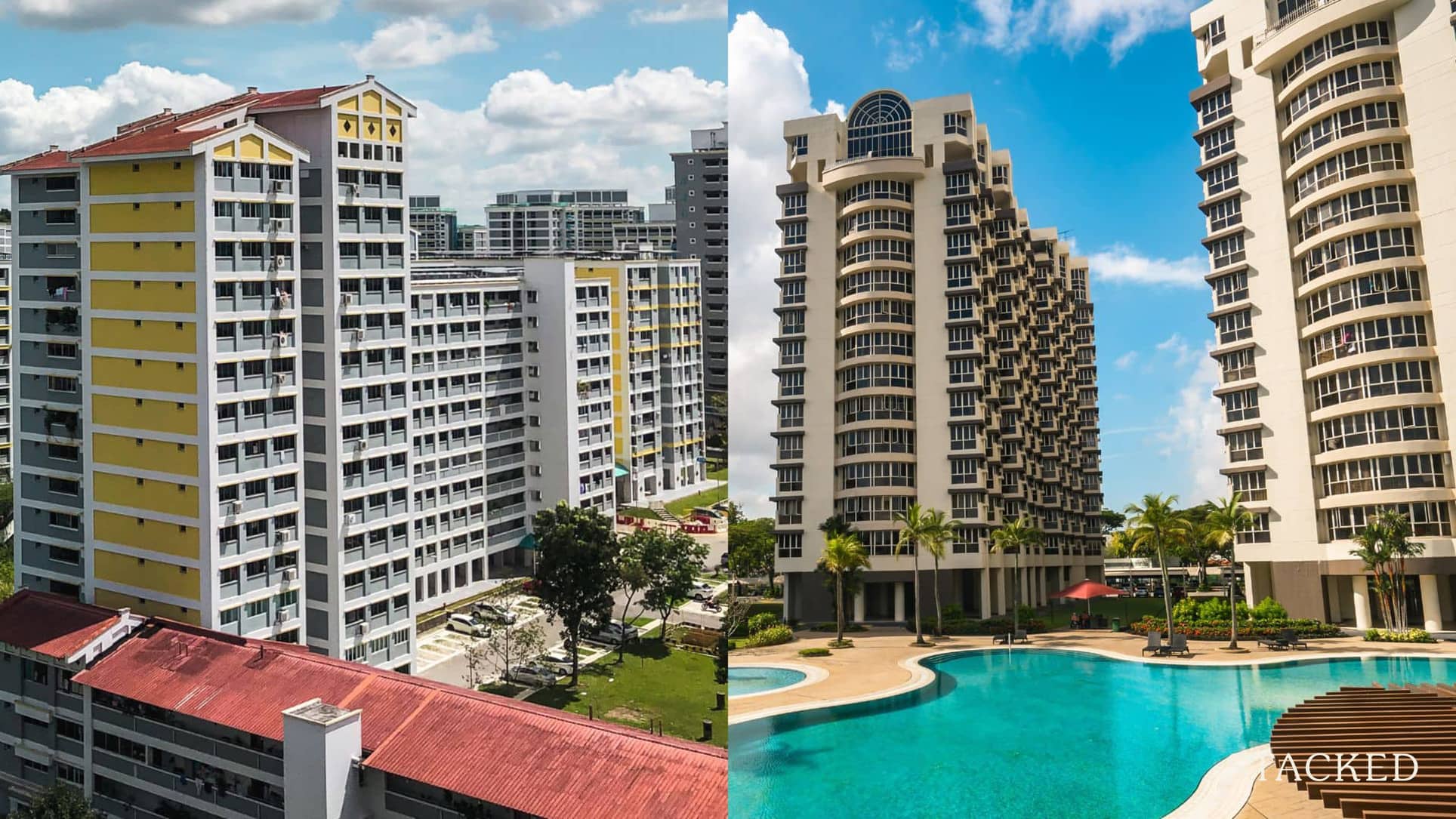 To most Singaporeans, upgrading is seen as the “natural” thing to do if you start earning more, or your flat appreciates. We probably don’t need to go over the reasons, as there are hundreds of agents waiting to explain to each of you why it’s important to have a retirement asset, have property wealth progression, etc. But at the same time, not every attempt at upgrading goes smoothly – and some people have also shared their regrets:

By far the loudest grumbling we’ve heard come among those who upgraded shortly before March this year. The reason: interest rate hikes.

From the time of the last Global Financial Crisis (2008/9) all the way up to around March 2022, home loan rates in Singapore were cheap. It wasn’t impossible to find rates below two per cent; and if you go way back to 2011, there was even a time when the interest rates pegged to the Swap Offer Rate (SOR) were negative.

Then in a sharp turn, the United States Federal Reserve hiked interest rates to combat rampant inflation. By the time October had come around, fixed-rate loans were at around 3.85 per cent per annum; and since then some banks have started to pull their fixed-rate products off the market altogether.

One upgrader we spoke to, who just wants to be known as Roy, says he regrets not making his upgrading attempt earlier:

“In 2012 my wife already pushed me to sell our flat and upgrade to a larger condo; at that time, we had just reached the MOP. I also got the same advice from my brother-in-law, who is actually a property agent.

But I got to admit my own fault because I kept finding reasons to put it off; I was a bit lazy to move and all. By the time I finally acted this year, the interest rate is high, and the prices are also high. If I had upgraded in 2012, at least I would have saved on eight years of higher interest.”

Another upgrader, Janice, says she would have waited rather than made her move this year:

“If I can save up for just five years, I would have been able to buy my current unit without even using a loan; because I and my partner have no children or anything, we are just buying a very small resale house.

But I was afraid because of the rising prices, later it would be worse, so I took a loan to buy now instead. Then just my bad luck, the interest rate is now rising so fast. But at least I didn’t take a very big loan.”

(Janice made a large down payment of around 40 per cent).

As an aside, we wouldn’t say that Janice’s instincts were necessarily wrong – it is plausible that price increases over the next five years would be worse than paying higher interest rates.

2. Letting go of the bigger home

P, who sold his HDB maisonette to buy a resale EC, says he has been feeling buyer’s remorse ever since. He originally lived in Hougang, and says he sold his maisonette for “around $700,000”.

He says part of his decision was the shock at hearing the offer. P hadn’t actually been intending to sell until a property agent knocked on his door and claimed there were interested buyers.

P says he doesn’t really follow the property market, so the amount caught him off-guard. He decided that, as his children had already moved out, he didn’t need such a large space.

“I bought my current home around March last year, at Tampines Trilliant, because this is closer to Tampines Central, where my brother stays. But even though my children have moved out, I think we feel the lack of space. There is no room to keep most of our old furniture, and I feel very closed up even with the windows open.”

“Even though the facilities are nice, I don’t use them very often. So I think if I had a choice I will go back to my bigger unit – but the property agent already warned me, he said this kind of HDB flat, you sell now you probably can’t get back the same again.”

If you’re planning to upgrade, the impact of a smaller space may not be immediate. You might not feel it’s cramped during a viewing or two, but the feeling can sink in after the first few weeks.

It’s best not to assume that, just because someone has moved out, your spatial needs will shrink accordingly. According to one realtor we spoke to, it’s more about how long you’ve lived in a larger space.

3. Upgrading a larger unit instead of two units

Adrian and his wife opted to upgrade from their flat to a larger, 2,000+ sq. ft. unit, but subsequently felt they went overboard with the space.

Adrian says that, while the property agent did point out they could “sell one, buy two,” he was averse to the idea as it was a higher risk. He didn’t initially want him and his wife to both hold their own mortgages.

In hindsight, however, he feels the risks of buying their larger unit are not significantly lower:

“If either of us loses our income, it’s just as much of a risk, as our current home costs a lot more. Looking back, I think we were enamoured of such a large unit, after almost 12 years of living in a 4-room flat. So we mentally devised all sorts of justifications to buy the bigger unit.

But if I could wind back the clock, I think we would settle for the first unit we picked, which was a more modest three-bedder; and my wife could get a new one-bedder, which could be for my daughter when she grows older, and we could rent it out.”

Note that neither Adrian nor his wife would have paid the ABSD for purchasing a second unit, as they would each be owners of one property only.

This said the sell-one-buy-two approach is not ideal for every buyer. To exercise utmost prudence, choose a property where your monthly loan repayments are not above 30 per cent of your monthly income, and not more than five times your annual income.

4. Upgrading to a nicer property, but a less developed neighbourhood

M prefers not to mention the property in question, as he doesn’t want to create a negative impact on the project – but he is regretful of having focused too much on the condo and too little on the neighbourhood.

“In my flat, I had things to do at all hours; even at two o’clock in the morning, I can walk downstairs and have a kopi and a bak chor mee. I can meet up with my neighbours or my friends there to chit-chat. And I don’t think I ever paid for Grab delivery my whole life when I could just walk to McDonald’s or wherever.

But at the time I was dissatisfied with how old the flat was, how the neighbour crowded the corridor with too many bicycles and all the usual small HDB complaints.

When I got my condo in 2020 and moved in, I was expecting heaven; and I got it for a while. But after you get past the nicer view and the pool, I realised oh my god, there’s nothing to do here.

I rush out to buy food before 9 pm because the stores at the shopping mall will all close otherwise. If I’m sleepless at 2 am, there’s nothing to do except go downstairs and stare at the pool in the dark – unless I’m happy to spend $20+ to Grab to a more lively place to eat.

I think if I could choose again, I will pay more attention to the neighbourhood, less to the facilities.”

Did you upgrade recently, or know anyone who did?

Tell us in the comments what the experience is like; and what other upgraders should look out for!

In the meantime, you can follow us on Stacked for home buyer journeys, opinions, and trends in the Singapore property market.

The best is don’t move to condo or EC, they are just roofs over us; HDB is good enough. Flippers will suffer when reaching 55 years old, not enough CPF for RA. For those who can afford, buy another property or two for rental income is the best option.

P sounds like a clown. 870sqft for 2 pax and he finds it too small? Throw away some of your junk lah.

The feller would probably die of claustrophobia in a Japan or Hong Kong apartment.

We were lucky, pre-covid we would have loss a substantial amount of money if we sell our 4 room flat…. we manage to sell post covid cos our new BTO has already completed and we made a profit. We were contemplating to take a bank loan as the cpf pays a higher interest if we keep our money in the CPF. Luckily we made a move to fully pay our house using CPF monies… now the bank interest rate is soaring high! cos we wanted yo just have a peace of mind without having any loans

Not all who moved to condos suffer. U are just looking at a minority %. Try staying in an hdb location where u get staircases reeked of ammonia and loud neighbors movng chairs late into the night on top of u.

Absolutely, there are plenty more worse neighbours in HDBs frankly, condos do too but lesser. Not in terms of wealth but the latter groups people are more educated imho.