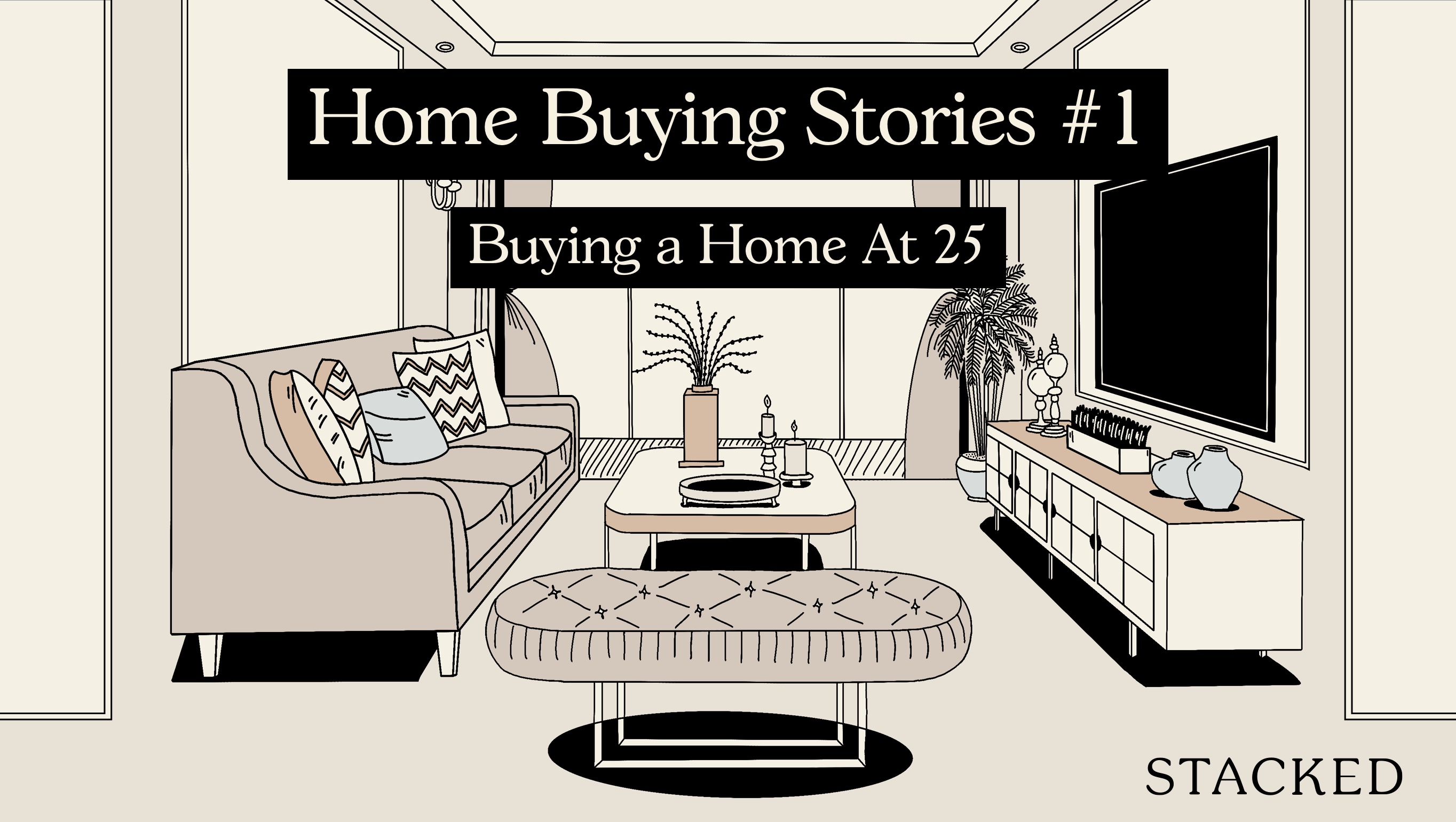 Most Singaporeans imagine they’ll be in their 40’s – at least – before upgrading to a condo; and realistically speaking, this is the norm in Singapore’s private property market. Most of us are reliant on the proceeds from our first flat, to fuel a condo purchase. However, there are always exceptions to the rule.

In this week’s article, we spoke to a young Singaporean named Khai, who bought a condo unit at the age of 25. And before you think it, he’s not a hotshot investment banker earning six digits a year. Here’s how he managed it:

An early interest in property

Khai had always aspired to have his own home. He explains that he “grew up in a four-room flat in Bukit Panjang, and there were eight of us in the family. So since young, I had been aiming at having my own place; preferably before the age of 30.”

Khai’s passion for property was also influenced by his parents, who “brought me to private and HDB showflats almost every weekend since I was six years old. I loved to admire HDB flats and condos.”

Khai has seen so many properties, he can make an accurate guess of the layout just from the façade of a residential block; right down to the estimated square footage and age of the building.

Khai works as a civil servant, currently earning about $5,000 a month. For most Singaporeans, this would make it a challenge to own a private property before 30. However, Khai was certain about starting out with a private home right away.

Khai was also informed: “I had been reading about property data and news since I was 13 years old, mainly through newspaper articles.”

“Having to wait till 35* to own an HDB flat is a long time,” he says, “so I started working at 17, right after O-levels. I worked part-time in retail, and I had to juggle between two retail part-time jobs, and three years of study for my Diploma.”

During his National Service, Khai saved up as much of his allowance as he could. Over the course of seven years of disciplined savings, he thought he had saved up enough for the down payment on a private home.

Saving up for the first home

Overall, Khai’s savings plan averages out at just above $1,400 a month over the years. He kept expenses low, at just around $500 per month.

However, Khai had to tweak his plans slightly, despite accumulating enough for the down payment.

In July 2018, the government passed new cooling measures. With most of the media attention focused on the increased Additional Buyers Stamp Duty (ABSD), it was easy to lose sight of an equally important change – one that would affect first-time home buyers like Khai, even though he wasn’t subject to the ABSD.

This was the decrease in the maximum Loan To Value (LTV) ratio, which determines how much you can borrow for your property.

Prior to July 2018, the LTV ratio was capped at 80 per cent – that is, the maximum loan quantum was 80 per cent of the property price or value, whichever is lower. After the cooling measures, the LTV was reduced to 75 per cent; and the five per cent difference was significant:

“Initially I wanted a new launch” Khai says, “and I last balloted for Twin VEW; but with the down payment increased to 25 per cent, I was priced out.”

Twin VEW is a 99-year leasehold property in Clementi; notice that the cooling measures hit close to its early sales. Prices averaged $1,405 psf at the time, with many of the single bedders at around $680,000. As such, an added five per cent down payment would have meant about $34,000 more.

In the end, Khai decided to opt for a resale condo instead. He also noted that other advantages included “a lower quantum, and being able to move in immediately.”

As such, he settled on Parc Rosewood – a 99-year leasehold condo in Woodlands, which was completed in 2014. Khai was able to secure a single-bedder, at a reasonable price point:

The lower cash outlay, along with the ability to move in immediately, now sees him living in a private property well before his 30’s. Quite the accomplishment, given that many of us haven’t even upgraded from our flats by 35!

*Khai paid the BSD and conveyancing fee in cash. However, note that BSD can also be paid from CPF, and some lawyer fees can be paid from CPF (it depends on the firm you use). 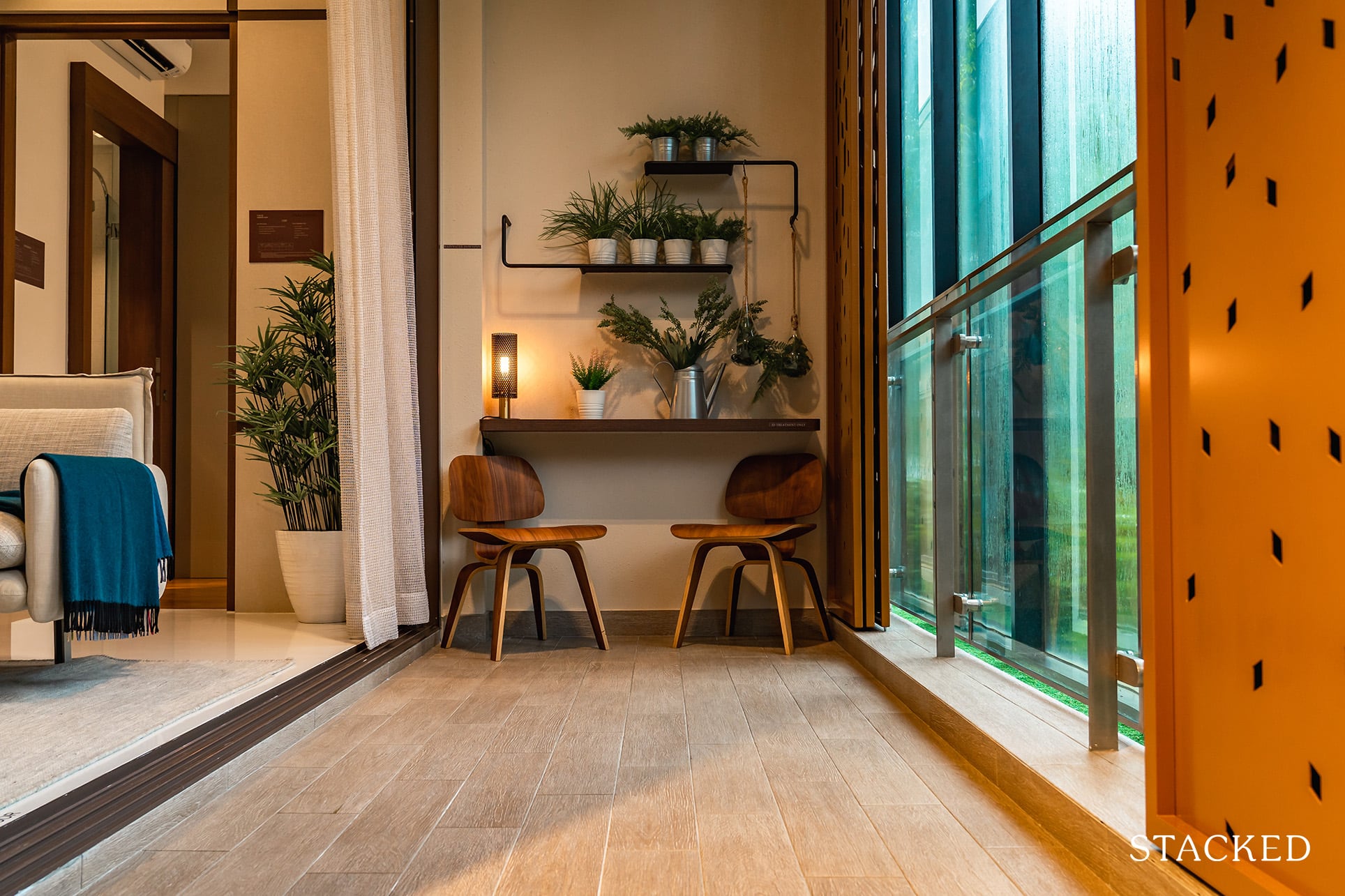 Most importantly, the property proves right for the owner

“I’m super happy with it,” Khai says, “It’s a corner unit with an extra window at the dining area, so I can enjoy the greenery. Plus there’s a toilet window for better ventilation!”

Above all, there’s a sense of joy in having his private space, which makes the years of hard work and forced savings pay off.

Depending on the future state of the property market, Khai may also have the means to upgrade; perhaps “to a one-bedder plus study, or to another location”.

The one thing Khai may have done differently, however, is not to have taken up the two-year fixed rate.

“It kind of sucks to be locked in during this low interest rate,” Khai says, referring to the current rate of 1.3 per cent (this recent plunge in interest rates was due to the Covid-19 downturn).

“However my two-year lock-in is almost up, and I can look at repricing or refinancing soon.”

To be fair, interest rates seemed to be rising at the time Khai bought the property; and no one could have foreseen the Covid-19 situation. However, home owners should take note that a fixed-rate period is also a lock-in period (e.g. if you were to take a five-year fixed rate, you would also be locked-in for those five years).

The main challenge, as Khai correctly identified, is the initial down payment on the home.

In fact, many Singaporeans don’t have trouble passing other requirements, such as the Total Debt Servicing Ratio (TDSR)*, or paying for stamp duties (which can also be covered by CPF). The main challenge is meeting the 25 per cent down payment, which requires a period of dedicated savings.

Note that, as Khai did above, you don’t have to make the whole down payment in cash. Only the first five per cent must be paid in cash; but the next 20 per cent can be paid in any combination of cash or CPF.

Feel free to contact us on Facebook, if you need to know whether you have sufficient savings for any given property.

Another consideration is flexibility. Khai was willing to change his plans and go for a resale unit instead. Young homeowners would do well not to fixate too much on a given property (e.g. insisting it must be new), and get what is within affordability.

(You can always sell and upgrade a few more years down the road, when your property has appreciated and your savings have grown).

*The TDSR restricts your total monthly home loan repayment, plus other debt obligations, to no more than 60 per cent of your monthly income.

Speaking of being flexible, be sure to browse other property options, even if you already have a preference. We suggest making a shortlist of three or four options, just as a contingency plan. You can check out in-depth reviews of the best condos in the Singapore private property market on Stacked.

Special thanks to Khai for taking the time for this piece.

Can someone help me to understand in this article, why is it a mistake to take on a ‘two year fixed rate’ and how is 1.3 percent bad? Isn’t lower interest better, which translate to lower monthly repayment?

i think it is saying khai is currently locked in with a 2- yrs loan and hence could not take the advantage on the current 1.3% rate.

woul’dnt “khai” be better off getting married and balloting for a HDB in dakota or bidadari?

Hey there! Thanks for your comment, though not everyone is looking to settle down. As a single, there aren’t too many options to begin with especially at that age.

As a single who owned his first private property (1 bedder in D15) at age 30, I have been there done that and fully appreciate the sacrifices one made in order to own that first apartment. However, I would not jump into a Rosewood drive one vs a Clementi one for my very first unless I intend for it to be mine very last (or for a really long long time). It is anyone’s guess the appreciation potential of one over the other. Stats can probably give a strong bias for one over the other without even needing to guess.… Read more »