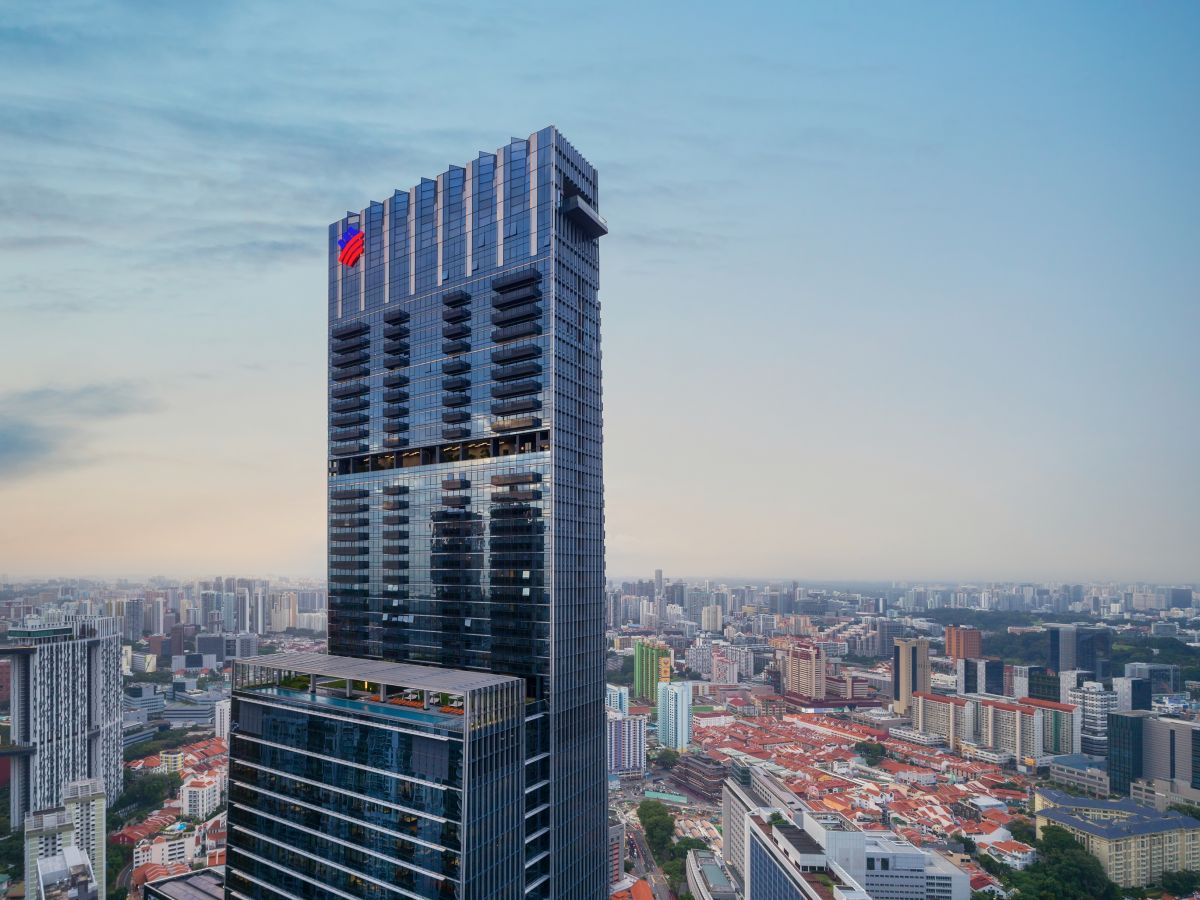 A daughter company of the Guoco Group, GuocoLand Ltd has been a major player in the Asian real estate development scene for some time now.

The company is Singapore-based, but their range of operations extend beyond our borders to neighbouring countries like Malaysia, Vietnam and China.

In 2017, GuocoLand joined forces with fellow developer, Eco World International Berhad, and further expanded into the markets of the United Kingdom and Australia. A true testament of their fiscal strength and ambitious (yet wholly credible) nature.

Look a little closer to home, and I’m sure that most (if not all) of you would have heard of Singapore’s Guoco Tower.

Situated by the Singapore river, it is a hotel, shopping centre, luxury condominium and office sprawl stacked into one development – a feat second only to the fact that the Guoco Tower is also the tallest building in the country!

Besides achieving great heights (forgive me), GuocoLand has also been a prominent figure on the Main Board of the Singapore Exchange for years.

It was listed almost immediately on the Singapore Exchange Securities Trading Ltd back in 1978 – barely two years after the company was founded on 31 March 1976.

As for GuocoLand’s mighty growth in assets post 20th century, well, that would mostly be attributed to its Former-CEO, Mr Quek Chee Hoon.

From his takeover in 1999 till his retirement in early 2014, he spearheaded a bulk of ventures that resulted in the company’s asset base growing from just under $2.9 billion to an astounding $9.2 billion.

Things are also looking good under the leadership of current-CEO, Mr Raymond Choong Yee How.

With that in mind, I believe that Guocoland does have a bright future going forward.

GuocoLand vs Singapore (Value of Projects)

Let’s now take a look at GuocoLand’s property values versus that of Singapore’s over the past decades.

As you’d observe, the company’s projects had been lagging behind in average property valuation from the get-go.

That was, up till 2012 when GuocoLand’s prices eventually caught up – and gradually surpassed the market average.

How did that happen?

Let me break it down for you.

(For those who are familiar with the following scenario that played out, please feel free to skip ahead!)

Adding to that, the foreign growth of Singaporeans PRs and non-residents between 2004 and 2009 far exceeded that of local citizen growth.

In essence, our growing population, with an ever-increasing demand for foreign talent – coupled with limited land space and a ‘booming/safe’ economy led to massive pent-up demand for property.

This demand then fueled the rise in property prices which had been dulled in previous quarters post 2006/2007 price peaks.

Soon after, the government stepped in with cooling measures to prevent further price surges (in fear of a housing bubble and a subsequent price crash).

One of them would be the introduction of Additional Buyers’ Stamp Duty (ABSD). Effective Dec 2011, ABSD essentially discouraged property investment opportunities by setting a hefty fee for every additional property one would own in Singapore, encouraging both locals and foreigners to focus on ownstay purchases.

This, along with an accumulation of other factors like restricted home-loan maturities that ultimately contributed to slowdown in property-price growth.

Yes, just at that point when cooling measures were pouring in, this CBD-based residential (part of Guoco Tower) had just commenced construction, and was a massive hit amongst the elite in Singapore.

With units starting on the 41st level, and a location that smacked it right in the middle of Singapore’s key financial district, it was no surprise that prices here were going for at least $3000 psf per unit.

But how did Guocoland manage to maintain its ‘value-form’ and exceed the national average even till today?

Following the measures, we saw a period of weakened property market sentiment from 2013 to 2017 (and hence a gradual dip in prices).

While GuocoLand suffered a relatively similar fate, the company’s ever-growing ventures into Luxury Condominiums (some of them in key central locations) allowed it to climb ahead of the pack.

In fact, some of their top upcoming projects, namely Midtown Bay, Meyer Mansion and The Avenir, all exceed prices of $2,700 psf and beyond!

In the meantime, Wallich Residence continues to pull its weight.

In total, GuocoLand has exceeded the market average consistently in project values for the last 8 years of the 26 shown above.

You can check out the entire list of its projects, further appreciation trends as well as the details of its upcoming projects which have yet to be completed below.

As a whole, the average transaction for a GuocoLand project made a profit of $349,150. The biggest average profits goes to Leedon Residence, at $781,212, but that’s also because it has one of the higher quantum per unit on this list.

(Note: For more information/the full list of GuocoLand Projects – both residential & commercial; as well as sale prices/in-depth appreciation trends of individual units, feel free to reach out to us at hello@stackedhomes.com!)

Built in 2013, the Goodwood Residence condominium is situated along Bukit Timah Road in District 10. Its residential makeup totals 210 units. 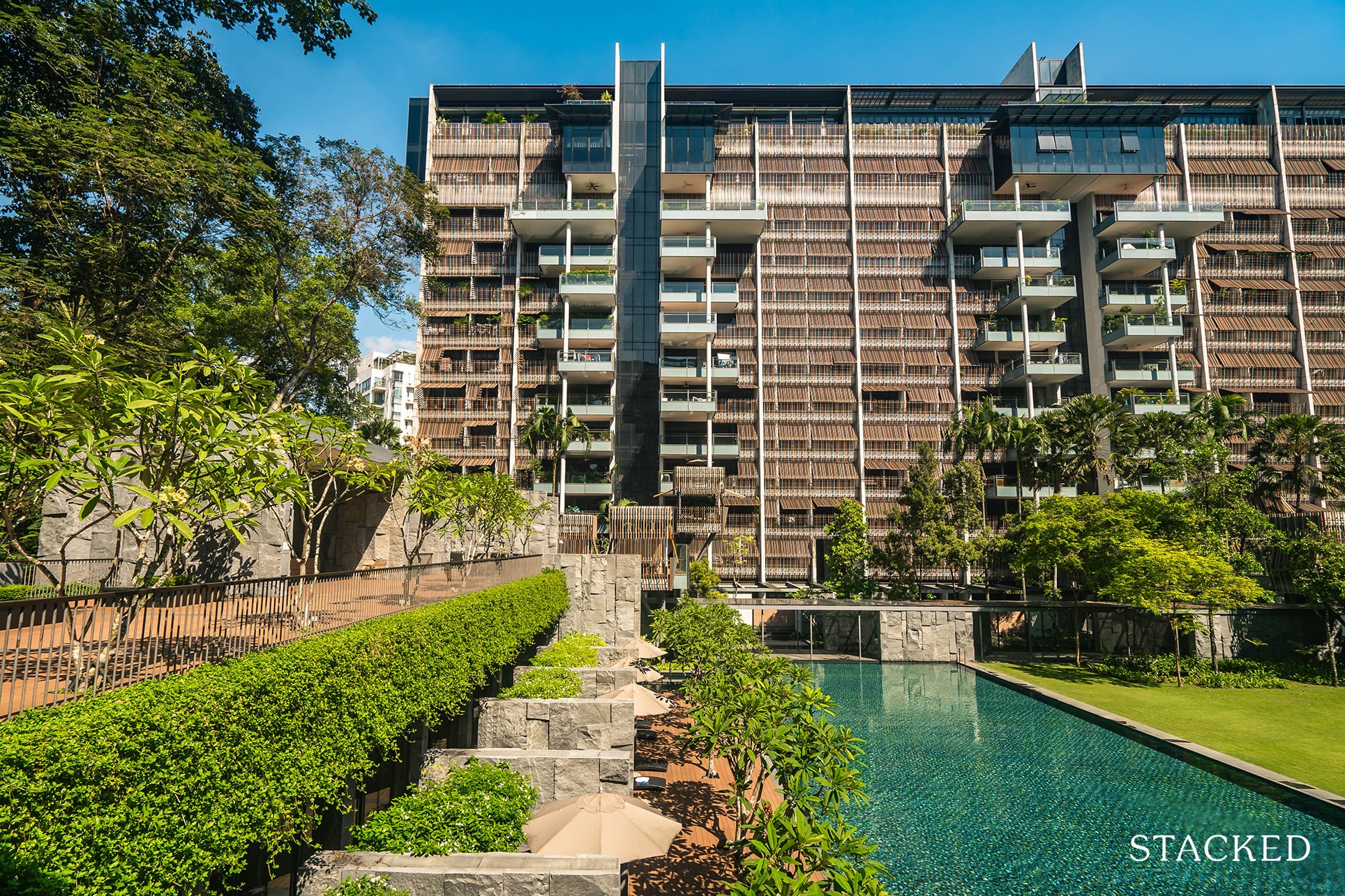 Built in 2013, The Waterline condominium is situated along Poh Hua Road in District 19. Its residential makeup totals 103 units.

Built in 2010, The View @ Meyer is situated along Meyer Road in District 15. Its residential makeup totals a mere 45 units.

Built in 2013, the Elliot @ The East Coast condominium is situated along Elliot Road in District 15. Its residential makeup totals 119 units.

Built in 2004, The Gardens At Bishan condominium is situated along Sin Ming Walk in District 20. Its residential makeup totals an astounding 756 units.

Built in 2008, The Stellar condominium is situated along West Coast Road in District 5. Its residential makeup totals units.

Built in 2006, the Leonie Suites are situated at Leonie Hill in District 9. Its residential makeup totals 87 units.

Built in 2006, Nathan Place condominium is situated along Nathan Road in District 10. Its residential makeup totals a mere 45 units.

(For more information on the various unit-types/availabilities of GuocoLand projects, feel free to drop us an email at hello@stackedhomes.com – PS: no hard sales, just genuine advice to suit your needs/wants!)