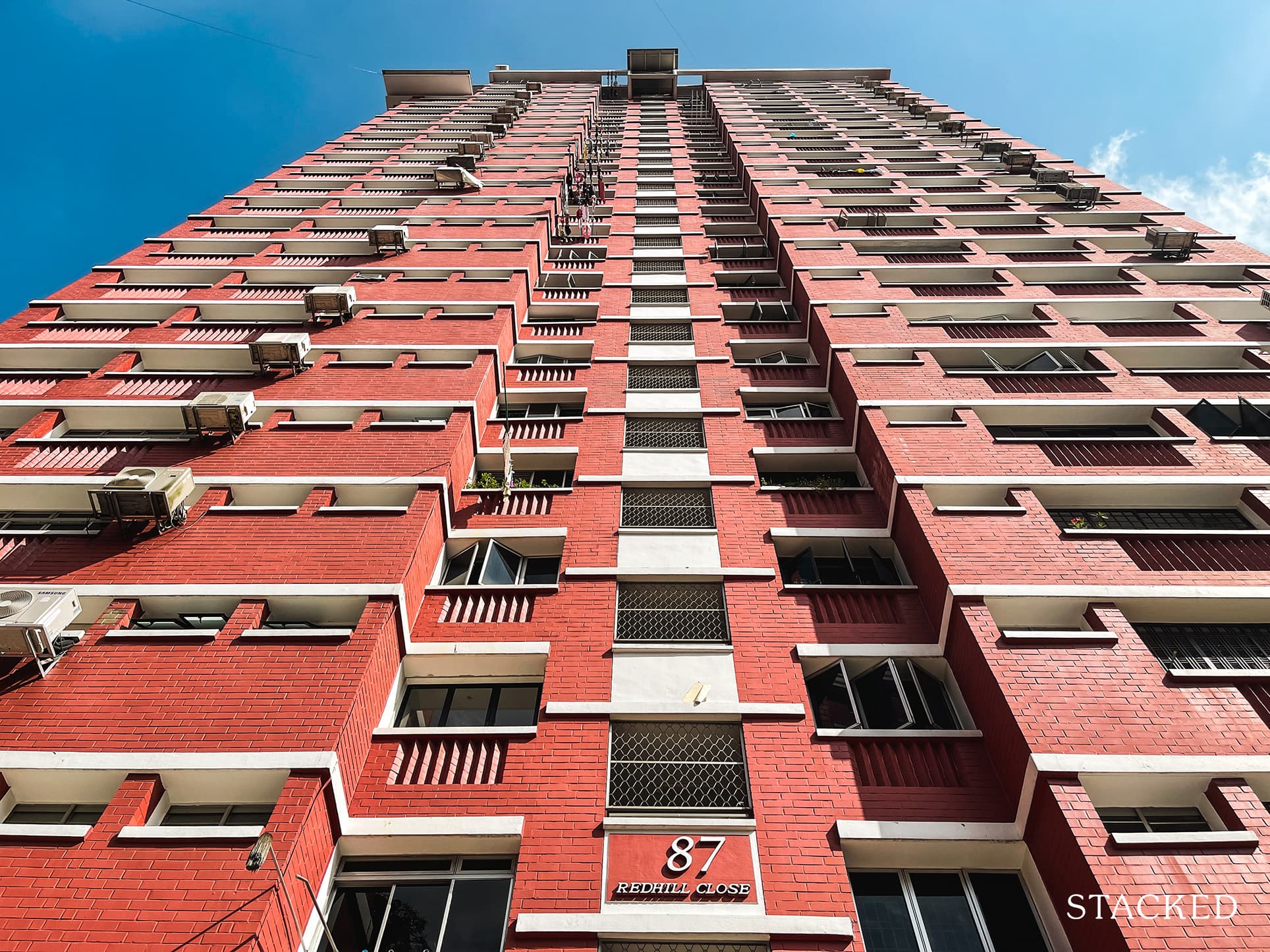 With resale HDB flats continuing their relentless ascend to record prices in nearly a decade, it seems that owners can do no wrong, regardless of which floor their flats are located on.

But did you know that there was a time not too long ago when there were actually some HDB flats which no one seems to want to buy, even if they are in a prime location (e.g. Queenstown)? If you noticed, these flats are typically located on lower floors, which are close to the bin centres or reserved for buyers belonging to the minority races under HDB’s Ethnic Integration Policy.

Besides being located near to bin centres, flats on lower floors may also face unwanted noises (e.g. basketball courts) and multi-storey car parks, which can pose a hindrance to the occupants, which has deepened their unpopularity amongst homebuyers.

Bearing this in mind, is it really going to be an issue if you do end up buying such a unit? Read on to find out!

Notes on this study

Before we present our findings, here are the following points that we wish to highlight –

The key findings of our study are summarised as follows –

Contrary to the conventional belief that flats on lower floors are shunned by homebuyers (which leads to lower resale prices as compared to flats on higher floors) it was surprising to note that that wasn’t necessarily the case. In fact, flats on very low floors outperformed those on higher floor categories in terms of PSF appreciation during the peaks of the property cycle (e.g. years 2007, 2011 to 2012, 2018, 2021).

(see Table 1 below, where only flats with leases starting between 2002 and 2004 were included, to minimise the inflationary effect of newer flat prices). This may suggest that when the liquidity and homebuyers’ confidence are high, even flats on less desirable floor levels can see decent profits that rival those on higher floors.

Now that we’ve looked at how $PSF of different floor types look over time, what other patterns can we observe?

Interestingly, our analysis shows that flats on lower floors displayed better resilience in their values as they age (pls see Table 2). This could mean that buyers generally do not mind staying on lower floors as much when the flat ages, so long as the flat fulfils other needs (e.g. amenities, and space, which we will cover shortly). It could also be surmised that as neighbourhoods became more urbanised, certain blocks with higher floors may have lost their view from before and therefore face a reduction in their premium. In other words, buying a lower floor unit could really be a “what you see is what you get” type of deal, but for higher floor units, this may not be the case since views can change over time.

Besides showing resilience in values by flats on lower floors that are ageing, larger flats (i.e. 5 room flats) in this floor category also exhibited less disparity in terms of their appreciation, as compared to their counterparts on higher floors (pls see Table 3 below).

One possible explanation for this trend could be the higher priority that homebuyers (who tend to be a family nucleus) place on space over floor level due to practical reasons, especially during this pandemic when most of us have been on a hybrid work arrangement, which could become a new normal moving forward as employers offer employees such flexibility in a war for talent.

Let’s take a look at how much higher floors cost compared to lower floors across HDB estates. The following table shows the price differences for transactions between April 2020 – April 2022.

Across different towns, we note that those with higher plot ratios (e.g. Bishan, Clementi, Queenstown) tend to have flats on higher floors performing better than those on lower floors (e.g. Clementi Cascadia, Pinnacle@Duxton, Skyville@Dawson). For such towns, views do matter to some homebuyers, and they typically spare no expense in buying such flats. This contrasts with towns that have lower plot ratios for HDB flats (e.g. Bedok, Choa Chu Kang, Hougang, Woodlands), where there is a shorter runway for appreciation. 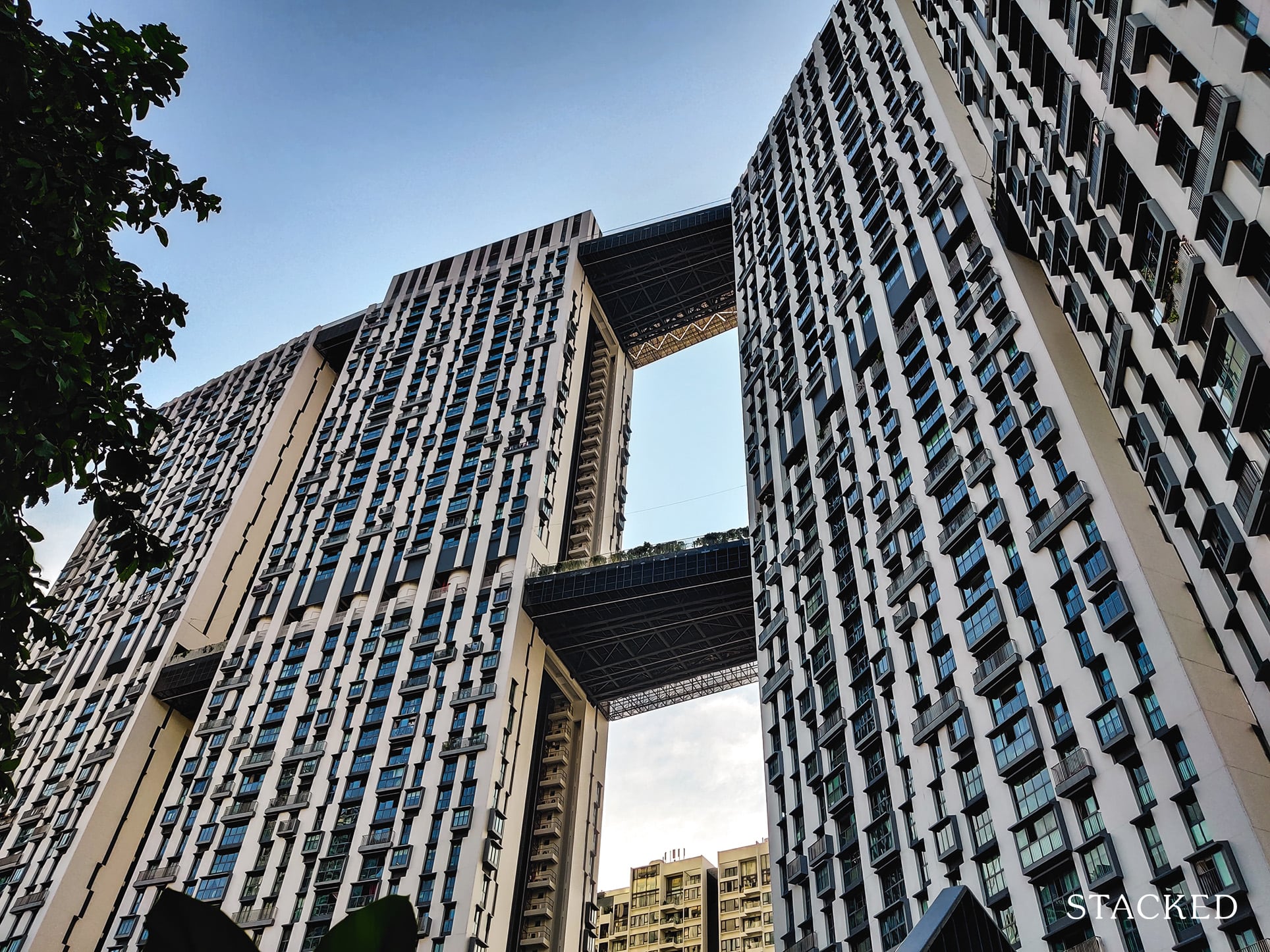 One exception here is Bukit Batok which saw a much higher $PSF difference from low floors compared to other non-mature flats. This could be explained by the larger proportion of new flats sold at Skyline I & II @ Bukit Batok (it goes up to 38 storeys and boasts unblocked views).

Resale transactions for high-rise HDB flats are more prominent in recent times, and it’s usually the mature estates with high-rise HDBs that carry a heavier premium. Mature estates like Tampines tend to have lower-rise HDBs likely due to the proximity to Changi Airport which could explain why the premium for mid and high floors is a lot lower than those in the Central Area, Bishan, Queenstown and Toa Payoh where flats can go 30 to 40+ storeys high.

Here’s what the premium on higher floors looked like for resale transactions between January 2010 to end of 2011:

Notice the stark contrast between the transactions between the years 2010 – 2012 for Central Area flats. At that point, Pinnacle@Duxton hadn’t reached its first MOP, as such, many of the central flats here were of the older variety that had fewer floors.

Also if you’ve noticed, Toa Payoh also consistently had significant higher floor premiums for transactions in both eras. This is because it was the first estate to register a resale transaction of a unit that’s above at least 31 storeys high (Toa Payoh Towers). DBSS like The Peak @ Toa Payoh also had at least 40 storeys transacted in the past few years, allowing it to maintain its high premium over lower floor units.

Another point is that for transactions between 2010 – 2012, data for HDB estates like Pasir Ris, Tampines, Yishun and Bishan cannot be found – this is because data for HDBs with leases earlier than 2003 were excluded from the study. Many BTOs built from the 2003 – 2007 era were focused on Punggol and Sengkang.

Overall, it’s observed that the differentials in prices between estates seem to be a result of different plot ratios, allowing newer and taller HDBs to increase the disparity between the lower floor and higher floors units and not so much that ground floor unit prices are stagnant.

To wrap up, flats located on lower floors are not necessarily as bad as some homebuyers may think, particularly when the property market is bullish. However, sometimes given the stigma associated with such flats, it might take time for them to be transacted.

So would buying a low floor property mean you’ll likely lose money? If a purchase was made in the secondary market, the odds of losing money as a result of this attribute should not be any different than buying other properties. It’s no secret that lower floor units are cheaper, and for a good reason. When you end up buying cheap, you are likely to sell cheap too – so the result is the same.

This is in contrast to buying in the primary market (e.g. BTO/SBF/New Launch) and then selling in the secondary market, where HDB’s/developer’s mispricing may occur and the lack of transactions for that development at that point in time makes it difficult to accurately price the unit for the first-hand buyer.

Should you be concerned about buying a ground/low-floor unit then? If you do your research well (check for past transacted prices of the block and surrounding properties), then these fears are unwarranted.

And as evident in our earlier finding on flats’ appreciation and their age, having good holding power is fundamental in any investment, even though the intent of purchasing flats may be more for occupation purposes.

Instead of focusing on physical attributes such as floor levels, it would be more conducive if aspiring homebuyers can complement this with the observation of impending changes in the external environment (e.g. using the Master Plan).

The latter will have a multiplier effect on the values of homes that is unmatched by floor levels alone. A couple of good examples would be the recent announcement of a new batch of 1,600 HDB flats in Farrer Park and an integrated tourism development in Jurong Lake District, which can help rejuvenate these areas and shore up home prices.

More importantly, as an HDB is often for your own stay purposes, do ensure that the reason you are buying a ground floor unit fits your lifestyle. Do you hate taking the lift? Do you mind having privacy issues? These are more pertinent questions to answer. When it comes to whether or not you’ll make money, it’s about your entry pricing and likely the external factors beyond just the floor level.

For more on property analysis, follow us on Stacked – and if you have any questions related to resale HDBs, feel free to drop us an email at hello@stackedhomes.com.