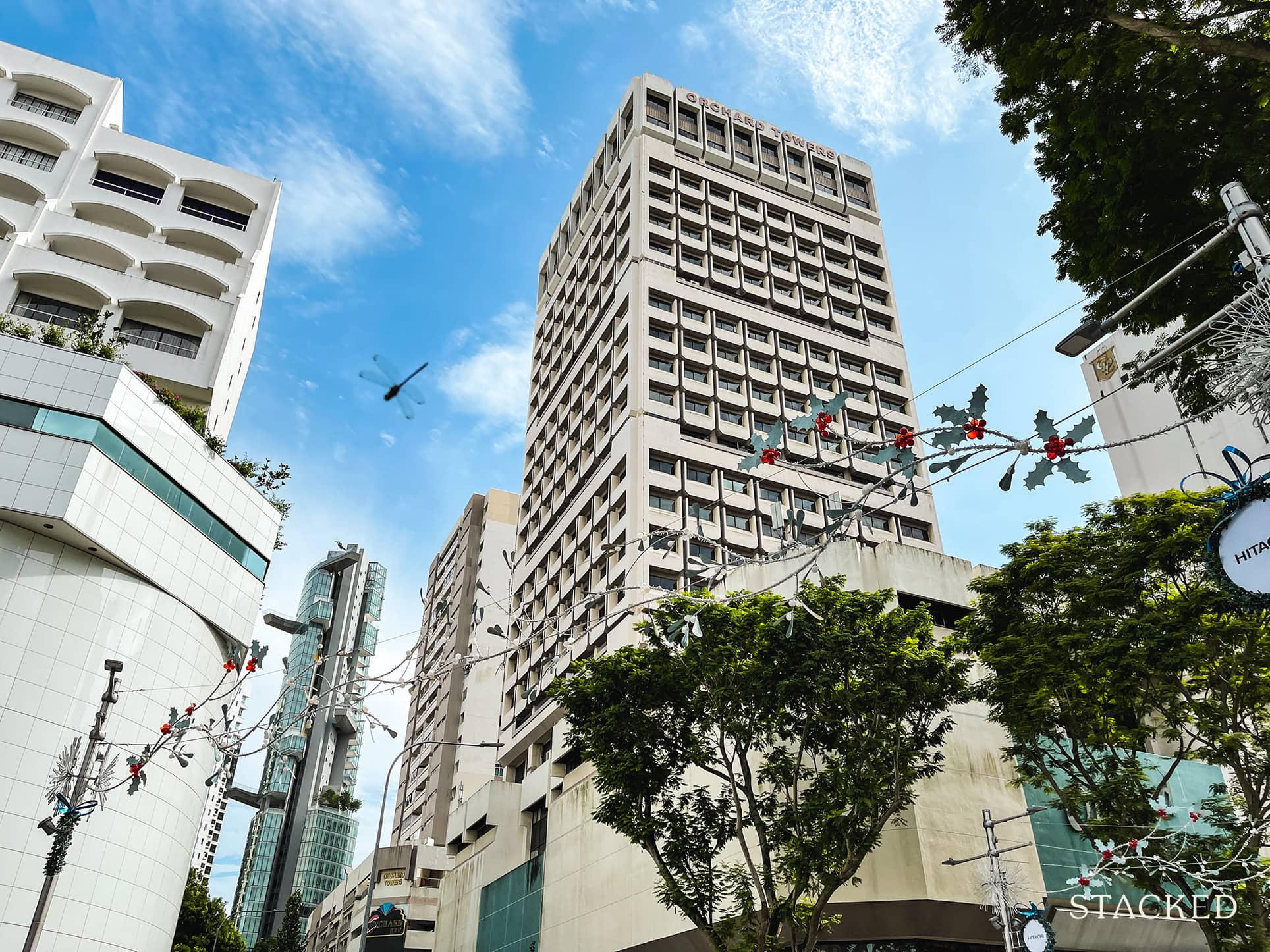 Before the popularity of online shopping, many Singaporeans would have been to Queensway Shopping Centre to browse all the sporting shoes on offer. While the shopping centre has seen better days, it still remains relatively well populated on the weekends.

But, not as many would know that Queensway Shopping Centre has a residential component too (the adjoining Queensway Tower). Even better, the entire development is freehold!

While these developments are definitely old, there are still some perks they offer that can be a unique proposition.

After all, not every feels a need for lavish condo facilities; and not all of us can afford to live on top of “atas” malls like ION. We’ve heard from many people who just want the convenience of a mid-range or lower-end mall, coupled with a good location. If you’re in this category, here are some surprisingly affordable options (but be ready to give up on the pool, clubhouse, etc.):

Queensway Shopping Centre is one of the oldest shopping malls in Singapore, and should need no introduction to most Singaporeans. It’s better known as a sports mall, where the first floor is filled with primarily sporting goods retail shops.

More interestingly, it featured the first public escalators installed in Singapore back in the day (as a sign of how old it really is).

There is an adjoining 13-storey residential block called Queensway Tower. This houses 78 freehold units that range from 980 to 1,679 sq. ft.

One of the main less known selling points is really the view here. The back of the development faces Alexandra Hospital and the current unblocked greenery view of the forested area Jalan Hang Jebat. But given that part of the land will already become Queen’s ARC BTO flats in 2027, it’s likely that most of the area here beyond the hospital will be reserved for more residential units.

Queensway did attempt for an en bloc sale in 2019, but weren’t able to achieve the required 80% signatures. Like most of the developments here, collective sales for mixed-use developments is typically more difficult to get a common consensus, as you will have to get the commercial shop owners on board too.

Lucky Plaza was the second mall built by Far East Organization (the first being Far East Shopping centre, naturally). The mall itself was actually completed even earlier than the apartment block in 1978. Back then, many people expected that this would not be a success as this was one of the most expensive developments to be built by a private developer.

It may not look like it now, but back in the day it was heralded for pioneering the concept of a modern shopping mall. There were many firsts too – the first multi-storey fully airconditioned mall, and the first golden bubble lift in South East Asis.

Lucky Plaza may be old and well-worn now, but it’s an open secret that – if you’re not fussy about looks – this is one of the most affordable ways to own a freehold private property on Orchard Road.

Now as a mall, Lucky Plaza may not be the most illustrious – it’s mainly famous for Ayam Penyet, things from the Philippines (that includes Jollibee) and pubs. But this becomes something of a minor drawback, when you remember you have the rest of Orchard Road at your doorstep. There’s even easy access to the Orchard MRT station (NSL and TEL) from here.

The main drawback is that, on weekends, Lucky Plaza is crowded hangout – this is where a lot of foreign workers meet, so the commercial segment can get pretty crowded and noisy. Also, some buyers may not like the seedy pubs that cluster in some parts of this mall, although they’re fairly easy to ignore/avoid.

Despite its age (it’s freehold anyway), Lucky Plaza is worth of consideration by new investors, singles, or young couples without children. It’s quite difficult to find Orchard Road residences for below $2 million in the current market.

The mall component of Roxy Square is nothing to brag about – it’s mostly famous for the food court below it, and for nostalgia shops selling bric-a-brac. The appeal are the huge number of amenities in walking distance.

Just down the street, you have Katong Village; and that has an NTUC FairPrice that opens till 11 pm. Head up the other end, and you’ll find i12, a recently renovated mall with a range of eateries including Tim Ho Wan.

Directly facing Roxy Square is East Coast Road, which is a long stretch of family-friendly pubs, restaurants, and enrichment / tuition centres. If that isn’t enough, Parkway Parade – the major mall for the area – is just around a five-minute walk. The Marine Parade MRT station (TEL) will be next to Parkway Parade, and opens in 2023.

While Roxy Square is visibly ageing, and the shopping component isn’t great, this is one of the few lower-cost ways to live within the East Coast expat enclave. The only issue is that the area is saturated with plenty of condos, especially freehold boutique condos – so there is quite a bit of competition (and much of it newer than Roxy).

Like many of the developments on this list, Beauty World Plaza is definitely not much of a looker. It’s definitely been much improved as a location with the opening of the Beauty World MRT station on the Downtown line in 2015. And there is also further upgrades to the area in the form of the mixed-use Linq @ Beauty World, and the yet to be launched Jalan Anak Bukit integrated development.

There are just 30 residential units here, that range from a surprisingly small 592 to 1,087 sq. ft. It’s also really interesting to see how the opening of the MRT station has directly impacted the development, as the psf prices here have nearly doubled since 2015 (the last time a unit was sold prior was 2009).

Unlike many of the developments on this list, it does also supposedly come with some facilities, including a pool, and kid’s pool.

It is also pretty convenient as a location (if you are a fan of the area). There’s a Giant and NTUC supermarket nearby, and you also have hawker food at Beauty World, plus the entire stretch of Cheong Chin Nam to look forward to as well.

We’re expecting City Plaza to see more aggressive offers, thanks to the development of Paya Lebar Quarter (PLQ). This is now a major commercial and retail hub, and City Plaza residents are only a four-minute walk away (this is also where the Paya Lebar MRT station is located).

City Plaza is also across the road from KINEX, in addition to having its own range of stores (there’s a Marks & Spencer in City Plaza, by the way, along with a Watsons). Overall, this project has become an incredibly convenient place to live.

Unfortunately, prices are unpredictable, as there hasn’t been any recorded transactions since 2017 – and we would expect a serious price hike, given the recent changes to the area.

One potential downside, however, is how heavily built-up this area has become. Apart from the Geylang River, the surroundings are glass, concrete, and roads all around – and it only gets more built-up as you near PLQ. This makes it a project that’s strictly for urbanites.

Out of all the developments on this list, Upper Serangoon Shopping Centre is probably the least known that it actually has a residential component. With just 8 units, it ranges from a size of 1,292 to 1,528 sq. ft.

It was built in 1980, and today is a place that seems to be frozen in time. From reading reviews online, many have commented that the place still smells the same from the 1980s (not too sure if that’s a good thing). But it does suffer from the usual tenant mix that in today’s context is just not a big enough draw to bring the shoppers in.

Besides the freehold status, it’s worth noting here that this spot has been rezoned in the URA Master Plan to a residential one. It was last a mixed-use development in the 2003 Master Plan.

Orchard Towers is by far the most controversial development on this list, with the development most well known for its nightlife and sleazy activities. It was a ghost town because of the pandemic, but recently it was reported that all public entertainment licenses at Orchard Towers would not be renewed beyond 31st May next year in an effort to clean up the image of the place. 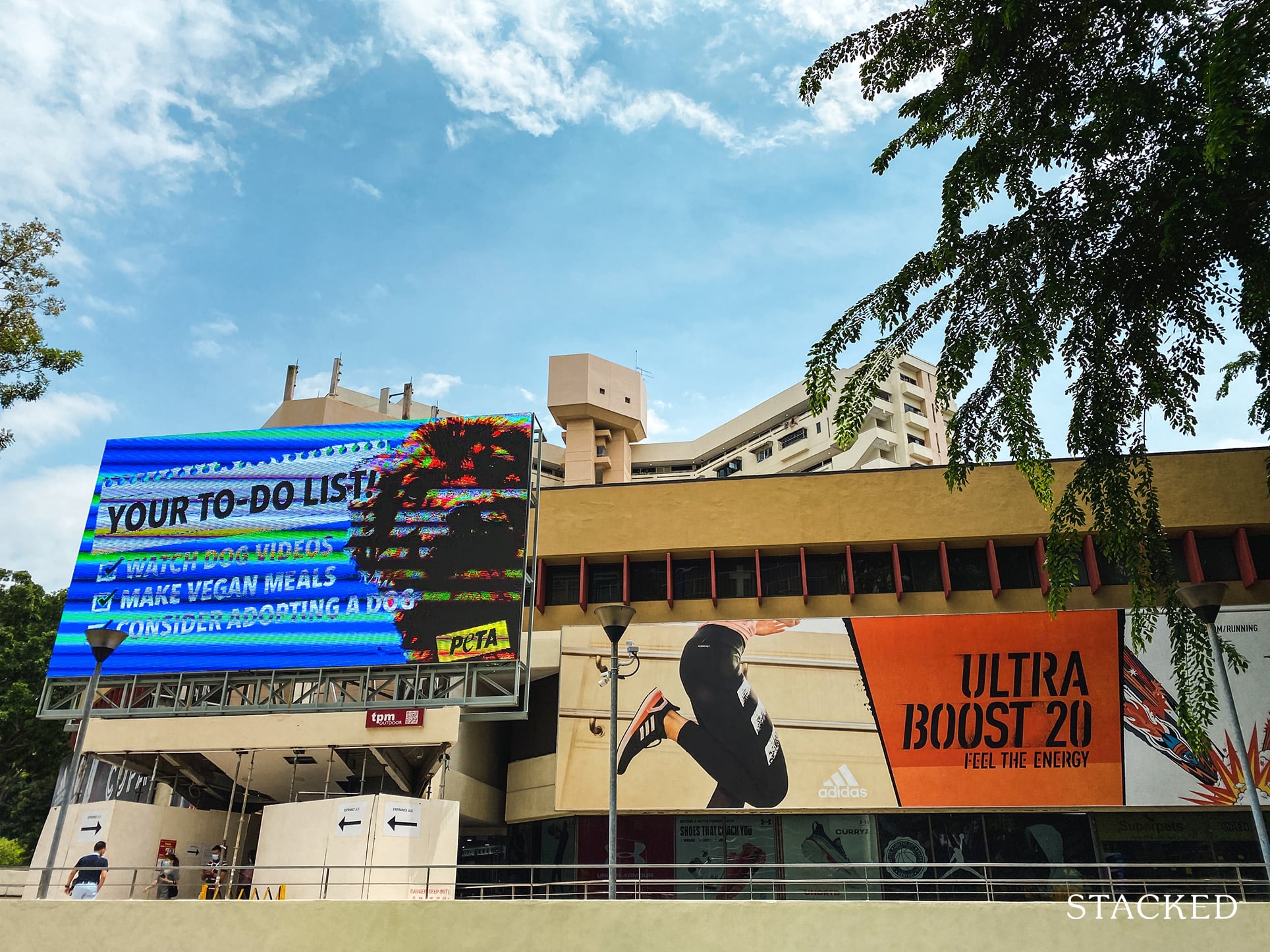 It also recently tried to attempt a collective sale in Feb 2022, for a staggering $1.6 billion, but from what we’ve heard the response has been a mixed bag. Again like some of the other developments on this list, a collective sale for such developments is usually harder when commercial owners get involved as it could affect their business.

There are 58 residential units here that are located in the block behind the commercial units, and there are also no facilities here to speak of. The residential block has also made an effort to distance itself away from the sleazy image of the place, and has only very recently renamed the building to One Claymore instead (as of 1st August 2022).

Jalan Besar Plaza is in a really convenient spot, and is within walking distance to 3 different MRT lines. The closest is Jalan Besar on the Downtown line, followed by Lavender on the East West Line, and Farrer Park on the North East line.

Like many on this list, not many people would be too aware that there are actually 44 freehold residential units here. These come in either 915 or 1,593 sq. ft, and are pretty sizeable compared to today’s newer units.

Given the attractive location, Jalan Besar Plaza has attempted a collective sale 4 times, with the last one in 2018 at a price of $380 million.

For more on the Singapore private property market, follow us on Stacked. We’ll provide you with in-depth reviews of new and resale properties alike.