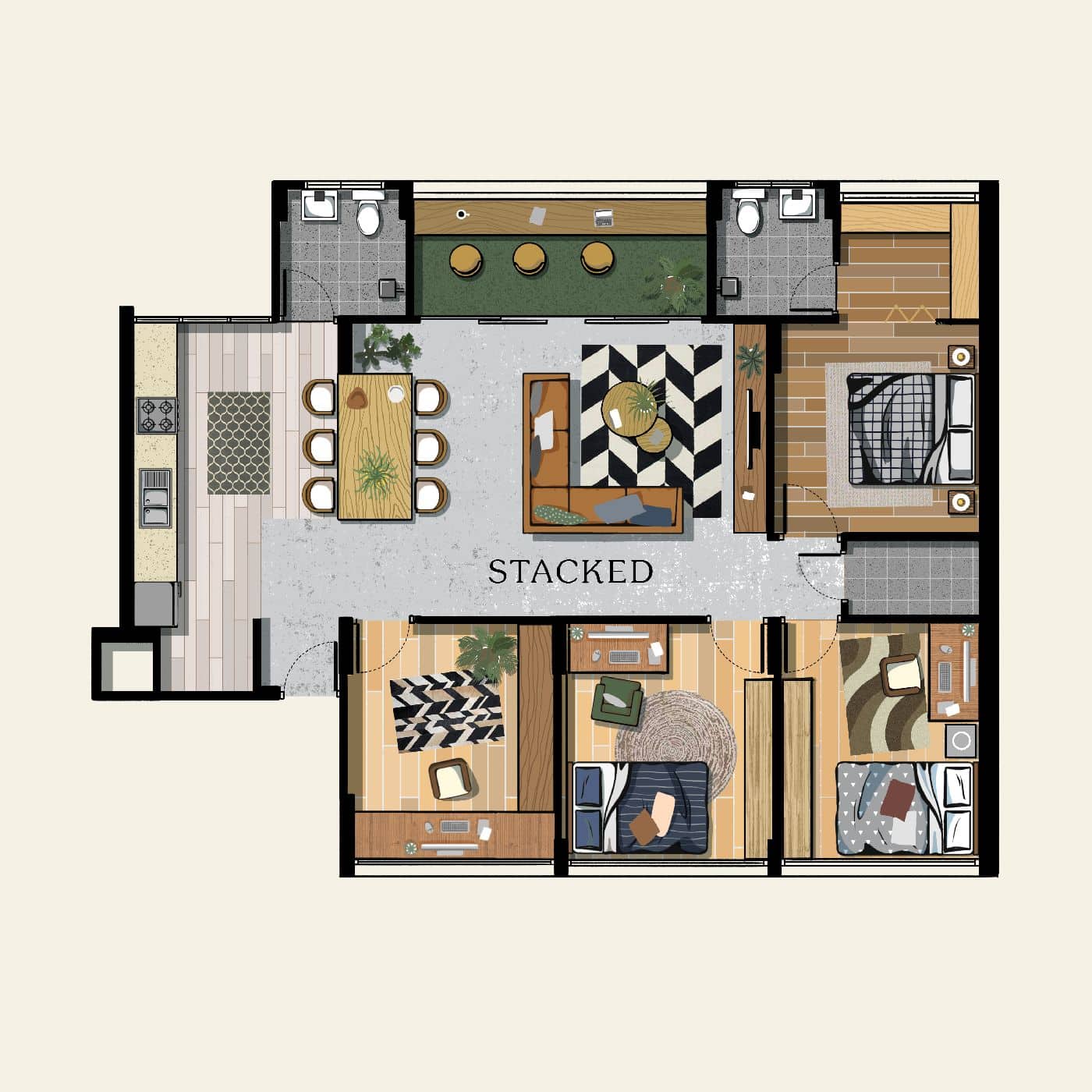 For those looking for a bigger living space but are a little tighter on their purse strings, an older resale 5-room HDB is still going to be the best bang for your buck.

Since the last 5-room and 4-room layout ideas have worked well, I’ll be looking at another popular layout type, the 5-room Improved corner unit. These were bigger-sized HDB flats that were typically 122 sqm (1,313 square feet), which is a great size for families looking for a bigger space today.

As you can see, the original layout comes with 4 bedrooms, so it’s a good unit for families with more than 2 children that want more privacy. Alternatively, you could also have a proper study/office space if you are still working from home at this point.

That said, while it’s great because it comes with 4 bedrooms, the location of the 2 bathrooms does leave much to be desired. As the master bedroom will have private access to one bathroom, that leaves the second bathroom to be shared among 3 bedrooms – which isn’t the best arrangement during morning rush hour.

The structural walls here are also a little restrictive, particularly between the study and bedroom 2 so you can’t have a huge seamless open space if that’s what you are after.

You might have also noticed the access balcony on the outside, these can be purchased if it meets the conditions under the Sale of Recess Area Scheme, which you need to apply for:

Also because as long as it does fulfill the following conditions:

Let’s see some layout options that could work

As we’ve seen in our Living In YouTube series so far, it’s not far-fetched that young couples today are buying bigger older resale units for the space – and really customising the entire home to suit their lifestyle.

In this option, the layout can be arranged for a luxurious living for 2.

Immediately on the left of the entrance are a storage area for your cleaning equipment and other knick-knacks.

The first thing you can do is to knock down the walls of the kitchen, this would create an open kitchen concept which would really accentuate the size of the space. I would put in a kitchen island here that can double up as a breakfast counter as well, and perhaps some hanging pendant lamps to create a cosier effect.

Given you only need 1 bedroom here, the rest of the space can effectively be used as living communal space. So now the dining can occupy the previous living/dining space, and the living room can be moved to the bedroom area instead.

Because of the structural pillar that can’t be hacked, you could think about a foldable glass door to separate the spaces if you want to retain more privacy. The next bedroom can be used as an alternative reading/tea room too.

For the master bedroom, there’s enough space here for a walk-in wardrobe, as well as a study/office on the right of the entrance when you walk in. I’d remove the store in the middle of both rooms as well, as you now have more than enough storage throughout.

For those that still want a bigger living/dining area but still want to retain 3 rooms at least, here’s another option to consider.

For the kitchen, you can still do an open layout one, but with sliding panels over the kitchen island that you can still enclose if you wished to do so. The breakfast counter idea can still be kept as there’s definitely enough space for bar seating here.

The dining has been moved to the study/bedroom instead, which can form quite a snug private dining area although you will have to be careful with the size of the chairs and table here.

This layout may look quite typical on the surface, but there are some slight details that make this a bit different.

First, the kitchen has again been opened up – but this time no kitchen island as it is replaced with a regular dining table. I suppose you could still do a kitchen island if you wanted, but you’d need slightly higher seating, and for certain people, it could be slightly uncomfortable as you don’t have space to put your legs.

The kitchen counter on the left can be extended to account for the lack of storage space if you don’t end up using a kitchen island. Nevertheless, once you step in, because everything is so open the space will naturally look very spacious.

I would also look to turn the balcony into a semi-indoor garden area with sliding doors to open up the space as and when needed.

This is a bit of an unconventional layout if you ask me, but perhaps suited for those who don’t find a need for any bedroom to have an ensuite given the awkward positions of both bathrooms.

I’ve always liked living and dining rooms that are horizontally laid out as it does give the illusion of a bigger space. As such, you could think about removing the walls of the master bedroom to create an elongated communal dining/living area. In this way, the original bathroom of the master bedroom is opened up, and the 3 bedrooms get to share both bathrooms even if there isn’t an ensuite bedroom now.

As for the kitchen, you can create a bigger space here given the living/dining has been opened up. I’ve placed a proper kitchen island here in the middle, along with another kitchen counter that can double up as another dining space as well.

This layout allows you to retain 3 bedrooms still, but incorporate a wet/dry kitchen concept instead.

The kitchen can be divided by means of sliding glass panels, which allow you to demarcate the space yet allow light to come through the space. There’s still space for a counter and a small island, which forms part of the dry kitchen, while another set of sliding doors separates the space from the wet kitchen.

Beyond that, the changes remain the same for the other rooms. I’ve shifted the dining area to the previous study/bedroom, and removed the storeroom between the master bedroom and common room to create a bigger master bedroom with an attached study.

Of course, if you want to keep 3 bedrooms here, the storeroom can be retained so as to have 2 entrances for the bedrooms.

Do you have any more 5-room HDB layout areas? Feel free to let us know at hello@stackedhomes.com or send us your floor plans and we can see what we can do!

Adriano is an old school real estate guy. Prior to establishing his own architectural/engineering design firm in New York City, he’s worked for a Brooklyn-based developer developing multifamily residential projects across the 5-Boroughs. In Singapore, he has experience with managing hospitality projects and rehabilitation of conservation shophouses. In his free time, he enjoys photography.