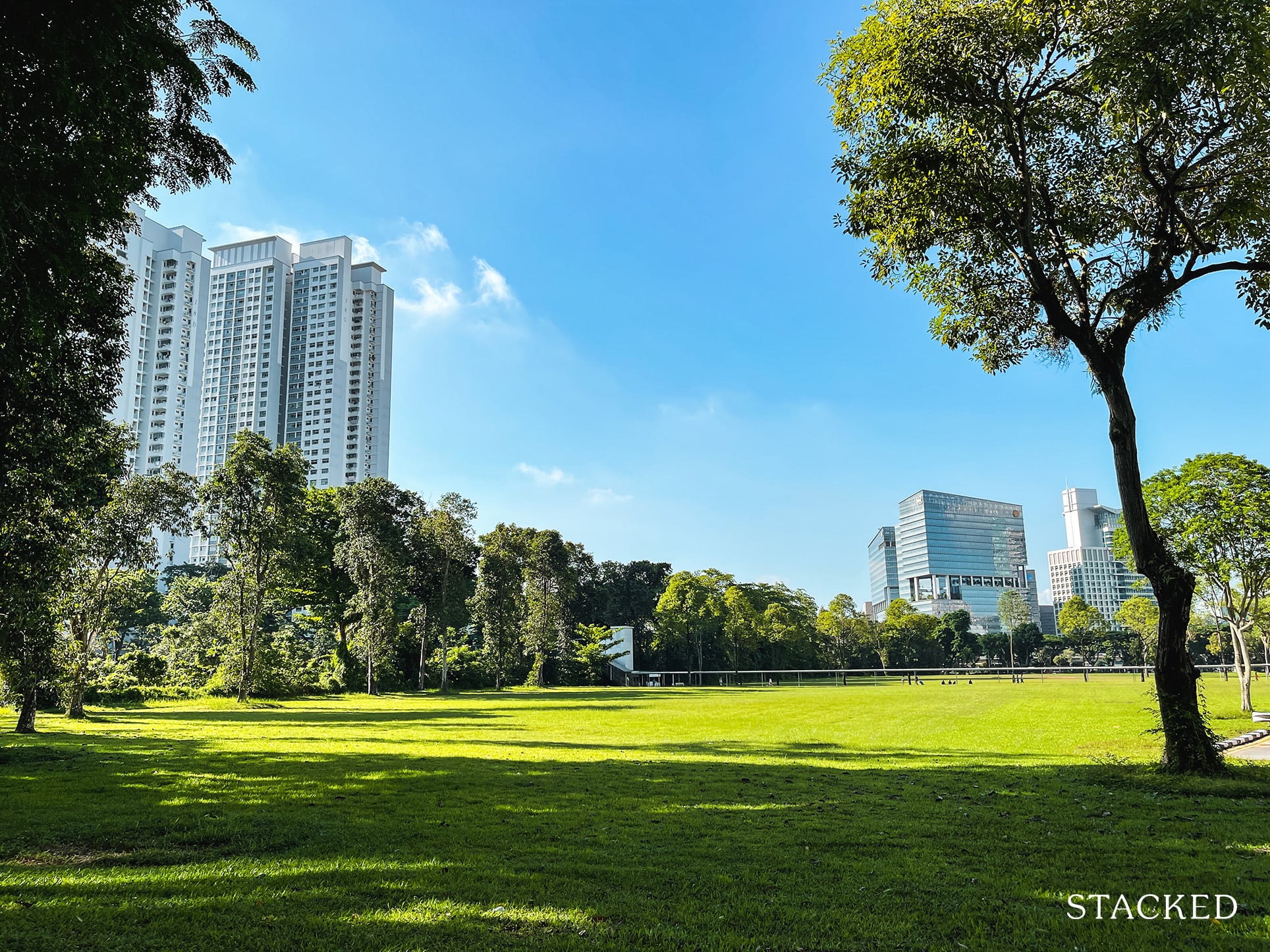 Tampines and Tanjong Katong rank high on the list of desirable residential areas; so we’re not surprised these two recent Government Land Sales (GLS) sites are drawing investors. This is on the back of two other GLS sites the week prior, which also saw aggressive bids. For those considering a property purchase in the next few years, all four sites are worth keeping an eye out for:

In speaking to analysts, we were cautioned that the strong response to these sites are as much about depleted land banks as they are location. That’s not to say the GLS sites are bad, mind you; it’s just worth noting that other factors are driving the bids.

We’ve covered this in more detail in a previous article.

The four GLS sites that recently went up are:

A follow-up on the Ang Mo Kio Ave.1 and Tengah Garden Walk sites

We’ve covered these two sites in a previous article, so do check the link for location details. However, we now have an idea what’s being built:

Tengah Garden Walk will be the first EC launched in Tengah, so it will set the pace for this area. There were seven bids from this site, with the top bid from Taurus Properties SG, at $400.32 million (about $603 psf). For what it’s worth, you can see how competitive the bids were for the site, as CSC Land Group lost out by a hair’s margin.

This is actually quite expensive for an EC, especially in an untested area. However, analysts we spoke to pointed out that developers are eager to replenish their land banks right now, and that ECs are among the easiest properties to move. This is apparently enough to make up for the unproven and – for now – underdeveloped area.

We were told the planned development is mid-sized at 615 units, consisting of 12 blocks of up to 14 storeys.

For those hoping for a Jurong East-style transformation, this upcoming EC is your chance to get in on the ground floor. But for those looking at asset progression (i.e., you want to sell for good gains right after the five-year MOP, so you can upgrade), any EC here is probably uninteresting. Tengah has a long way to go, and you’d best be ready for the long haul.

This site is close to both Tanjong Katong Primary School, and the Canadian International School. This is a large site at 210,624 sq. ft., but the location is a sure hit, especially among east-siders. The upcoming Tanjong Katong MRT station will be around 600 metres away, and it’s within a 12-minute walk to the lifestyle stretch of Joo Chiat – Katong. And at this size, it is expected to yield about 640 units.

The Tanjong Katong MRT station is expected to open in 2024, which is nice timing; it will probably be up before the condo gets built. This will also resolve the main bugbear of living along the Upper East Coast stretch, which has long been the lack of MRT access.

Given the area’s abundance of eateries, tuition and enrichment centres, and proximity to the beach, it shouldn’t be a hard sell to families. Note that it’s only around 1.5 kilometres, or about a three-minute drive, from this area to East Coast Park.

District 15 also has a strong expatriate enclave, so landlords will probably be quick to see the potential here. For foreigners, the proximity of the Canadian International School could be a strong draw.

There are four condos close to this site, and the area has mostly boutique developments. While this makes their price point less useful as a reference, it will be seen as a positive (limited competition) by buyers of the future project here:

Ola Residences (not to be confused with Ola EC in Sengkang!) 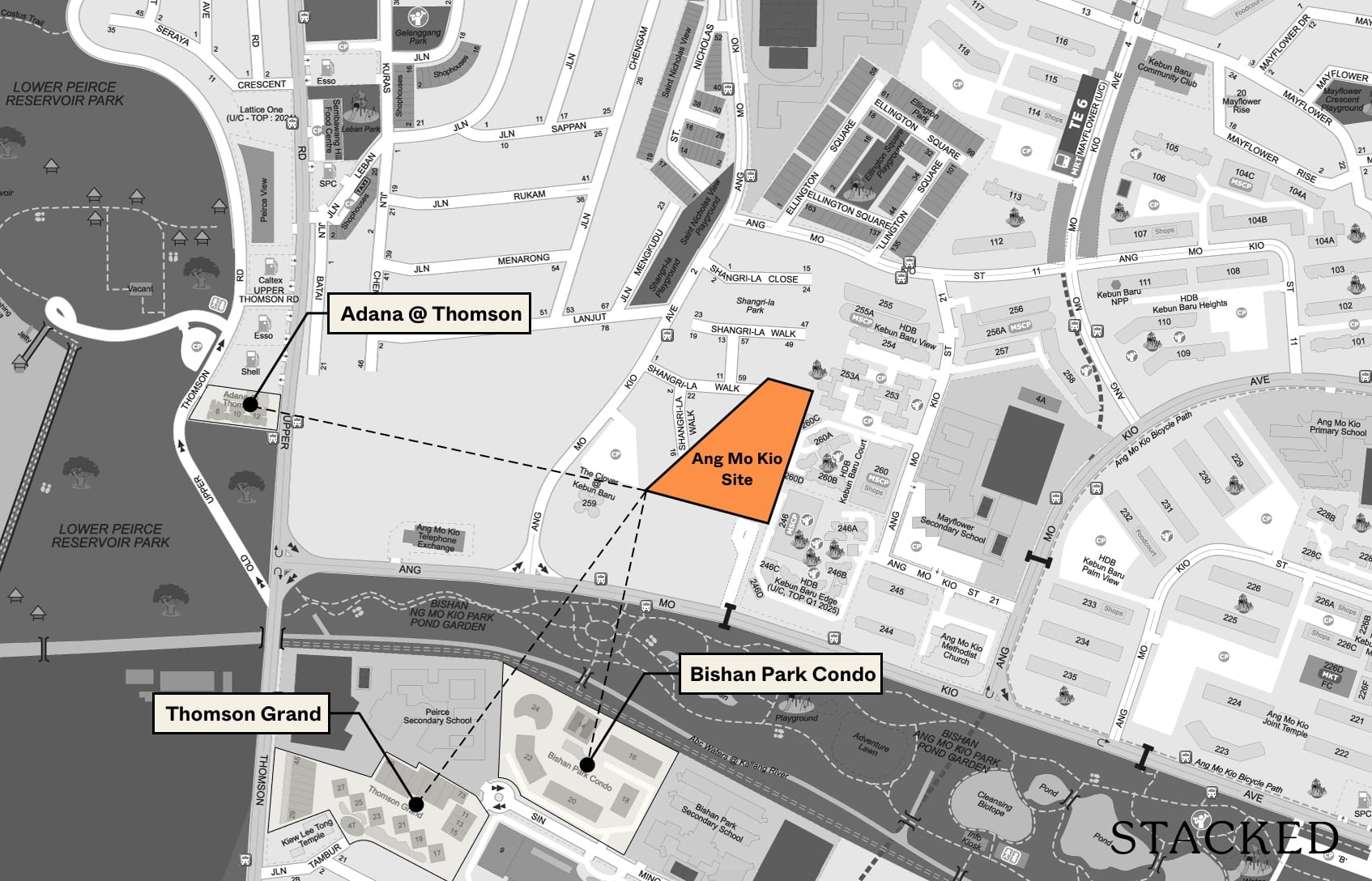 AnalysisAre The Ang Mo Kio And Tengah Residential GLS Sites Worth Waiting For?

We’ve covered the neighbouring site (Parcel A) in an earlier article, so do check this out for more on the location.

Parcel B is a 301,391 sq. ft. site, nestled among upcoming HDB developments (Tampines GreenDew and Tampines Green Foliage). At this size, it is expected to hold about 700 EC units. Unfortunately, this isn’t within walking distance to Tampines hub – this misses the highlight of District 18, as it’s where the grade A offices, and three major malls, are clustered. But at a roughly 2.4-kilometre drive, it isn’t exactly far either.

It’s also been pointed out to us that Pasir Ris MRT station is roughly within one kilometre. While we still don’t think that’s “walking distance”, it’s not too bad for an EC; and it might be considered convenient if you bike.

At present, the attention is still on Parcel A (this site isn’t sold yet); but we do think there will be a follow-up rush for this site. Tampines is still the regional centre of the east, even if this site isn’t exactly in its hub.

We also think developers will be closely watching the sales of another recently launched EC – Parc Central Residences, to take their cue. This EC just started sales in January this year, and is located roughly 2.2 kilometres from the Tampines Street 62 site. Which in the approximate 4 months it’s been launched, it has already sold 82 per cent of its 700 units so far. The performance of this EC could be taken as an indicator of demand.

With the exception of Tengah Walk EC, most of these sites are in proven locations

The sites at Ang Mo Kio Ave.1 and Jalan Tembusu are among the strongest offerings we’ve seen to date. For investors who are waiting out Covid-19, these may be the upcoming projects to keep an eye on.

In particular, the Jalan Tembusu site will stand out. Despite Katong being a major lifestyle stretch of East Coast Road, many of the condos near this site are ageing, or are boutique developments – this is all the way from nearby Tessa Lodge, to unusual properties like Red House further up the road. A development with a full suite of condo facilities can easily stand out from these existing offerings, with the only real competition coming from further away in Marine Parade (the area near Parkway Parade mall).

In any case, we’d expect strong bids for all of the above. The government did moderate the number of GLS sites for the first half of 2021. A move that we think developers aren’t too happy with, given the empty slate of properties from the previous 2017 en-bloc craze. This leaves them with either this handful of GLS sites, or trying to push for en-bloc sales; and the latter could be harder to push through at this time (some people won’t even want to consider finding a new place, so close to the pandemic).

For those keeping an eye out for a future new home, do note that for EC developments, they can only be put up for sale 15 months after buying the land or completing foundation works, whichever is earlier.

There’s also the looming threat of new cooling measures, which could further derail collective sale prospects, should the ABSD increase.

For more updates as the situation progresses, follow us on Stacked. We’ll also provide you with the most in-depth reviews of new and resale properties alike.

Jalan Tembusu. You forgot Haig court. And a bunch of other dunman road condos. Dunman regency also nearby.