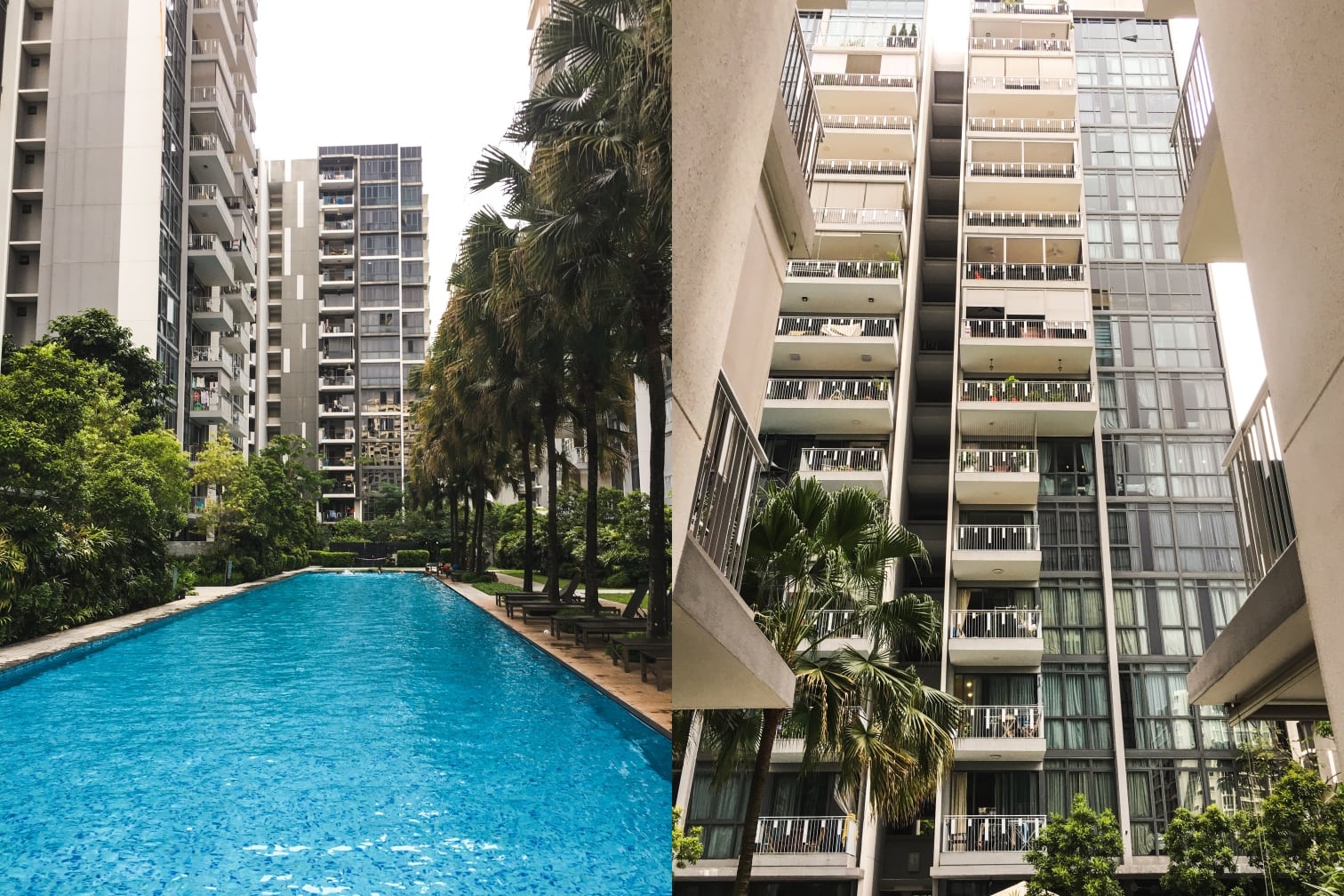 The Luxurie first came to my attention because of its duplex penthouses which have lift access to both floors, a rarity in the Singaporean property market (if you can’t afford to drop $15 million on a flat, that is.) As the article on duplexes proved very popular with readers (given our newfound emphasis on spacious living) I decided to head over to Compassvale Road to tour this condo.

For those of you who don’t know, it is a 99-year leasehold condo with 1-4 bedroom units in Sengkang by Keppel Land (which also built Reflections at Keppel Bay & The Glades). At the time of writing, the units for sale ranged from $980,000 to $1.8 million.

Fun fact: we labelled The Luxurie as an “ulu” condo in 2020 – click here to read about how it performed in the resale market after a strong performance when launched.

Although it’s a leasehold development, The Luxurie only TOP-ed in 2016, so you don’t have to worry about lease decay for some time. It is a 622-unit condo on 190,452 sq ft of land, consisting of ten 15-storey blocks, with 4 units on most floors.

The condo gives off a great first impression. To be honest, when I first heard the name “The Luxurie”, I found it a little, well, pretentious, but the drop-off point helps to give credence to the name. It is wide and spacious, and there is a covered area where residents can wait for their Grab cars which are covered with green walls. It certainly helps to elevate the feeling of the condo. Moreover, there are not only 2 car entry lanes into the car park, but also at least 3 lots at the drop-off where cars can park and wait.

If you are concerned about security, then The Luxurie is something you should consider. The security is the tightest of all the condos I’ve been to so far: I actually had to scan my IC to get in! (The security guard uncle was nice and helpful though.) There were a few unhappy Google comments about how strict security is, but they were all by visitors.

The car park covers 2 basement levels, with visitors assigned to B2. There is definitely more than enough car park lots for residents as B1 was not full and B2 was pretty much empty. This could be because The Luxurie is only 200m, or a 4-minute walk from Sengkang MRT and Compass One Mall, making public transportation very convenient. The Luxurie is actually 1 of only 3 condos within 5 minutes of Sengkang MRT station, with the other two being Compass Heights and La Fiesta. Both Compass Heights & La Fiesta are also 99-year leasehold condos, having been completed in 2003 and 2016 respectively.

Note: Speaking of maintenance, a property agent informed me that the MCST fees had actually been lowered for The Luxurie after TOP, which is rather rare for a condo. Fees usually go North and never South. (Note: I didn’t actually see any of the receipts, so was unable to personally confirm that the maintenance fees actually decreased.) (The management office is on-site FYI.)

In terms of facilities, there are 2 swimming pools, one of which is Olympic sized, whilst the other is smaller and set next to the kids’ playground and kids’ pool. The jacuzzi can seat up to 6, and would be a nice place to unwind: unfortunately, it was closed when I visited, probably because of COVID.

The BBQ area has been well-planned, as it’s nice and private, and has its own jacuzzi: BBQ-ing is hot work, so it would be nice to have a dip!

There is also a sunken tennis court, which can be entered from the car park. Over at B2 (in the car park), there is a ping pong table, which was in use when I visited. 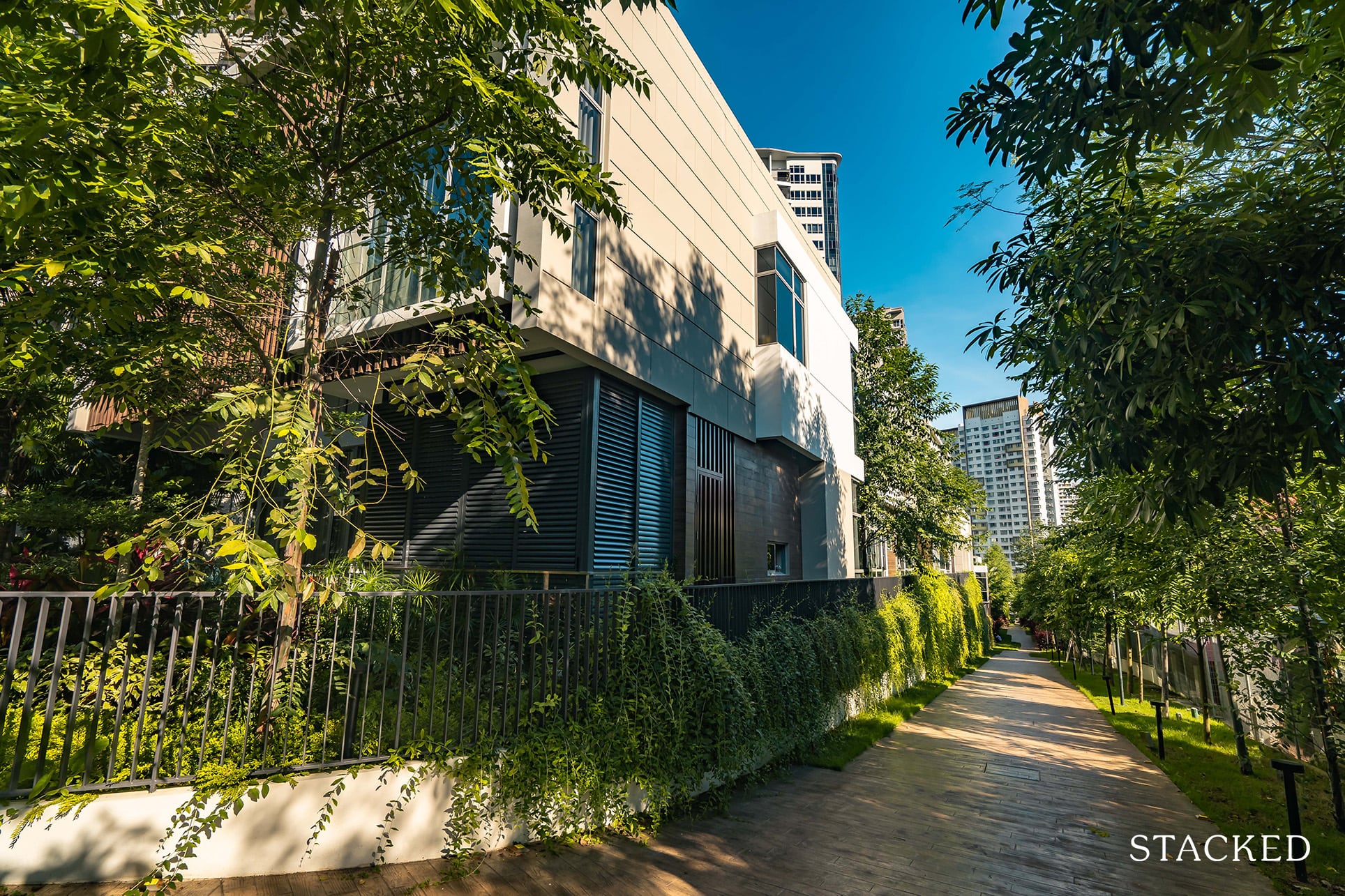 The downside of having 2 pools is that it will be hard to find a unit at The Luxurie with a quiet-facing: most units will either have to live with road-noise or with the sounds of the kids playing. The Sengkang and Punggol areas are well known to hold younger families, so it’s something you can’t escape living here.

Some ground floor units also have private pools in their patios, but unfortunately, I was unable to get a decent shot, as they were very well covered by the greenery the owners had grown (presumably for privacy. However, there is 1 such unit for sale, so you can view the photos here – if you’re keen, it’s a 3-bedder going for $1.688888 million.)

When I was previously exploring the idea of moving to this area, 2 friends kindly advised me against it as they felt the area was very congested. This seems to hold true at The Luxurie, as the grounds felt rather squashed.

The pathway around the pool, for example, is very narrow, and the gym and clubhouse look on the small side for a development with over 600 units. (Or perhaps I feel this way because the last view condos I’ve viewed have been massive!)

In terms of education, parents would be happy to hear that there are many Primary Schools near to The Luxurie such as Seng Kang Primary, Northspring Primary, North Vista Primary, Anchor Green Primary, Palm View Primary and Nan Chiau Primary. (Most are within 1 km.) Moreover, there is a sizeable child care centre just across the road.

However, unfortunately for nature lovers, The Luxurie is set in a very urban area, without green spaces in the immediate vicinity: the closes would be Sengkang Sculpture Park (about 11 minutes walk.) Alternatively, you could also trek over to Sungei Serangoon Park connector in slightly over 20 minutes or Sengkang Riverside Park in 30 minutes.

All in all, if you’re looking for something in the Sengkang area that is close to the MRT/ urban amenities and not fussed about having a park at your doorstep or if you have young kids and want somewhere close to schools with strict security, The Luxurie could be for you. For those looking for space, greenery and tranquility, you may have to continue looking.

Thanks for the sharing! I’m staying in Luxurie now and really happy about it. Not all units facing road side have road-noise, as some of the roads are surrounded by HDBs and with light traffic. I think the facilities may not be the best but good enough for the reasonably priced maintenance fee (I can verify that). Also, there is hardly any 2 bedroom unit available on the market at this price with decent size (2br here can be up to 883 sq ft), enclosed kitchen, all bathrooms with natural ventilation, within 5 minutes walk of mrt, 1 km to… Read more »

Hi Mike, very strange but somehow your comment ended up in our trash folder. Nonetheless, have taken it out (we don’t delete comments in case you were wondering!). Thanks for sharing your thoughts as a resident of this development, it is indeed seen quite favourably by others too considering its price point and positive attributes 🙂

Thanks TJ for your objective review of the security at The Luxurie. Its heartening for us to know that you recognised Acestes Security Officers’ strict access control efforts and customer-centricity at The Luxurie! We really appreciate your compliment, which I believe will further motivate our Security Officers to better perform their security duties. Acestes Security Agency would also like to take this opportunity to thank The Luxurie’s Management Council (MC) for contracting our security services and supporting our 100% Singaporean security workforce. As promised to MC, the daily deployment of our competently-trained Security Officers is always 100% (i.e. ZERO Shortfall).… Read more »