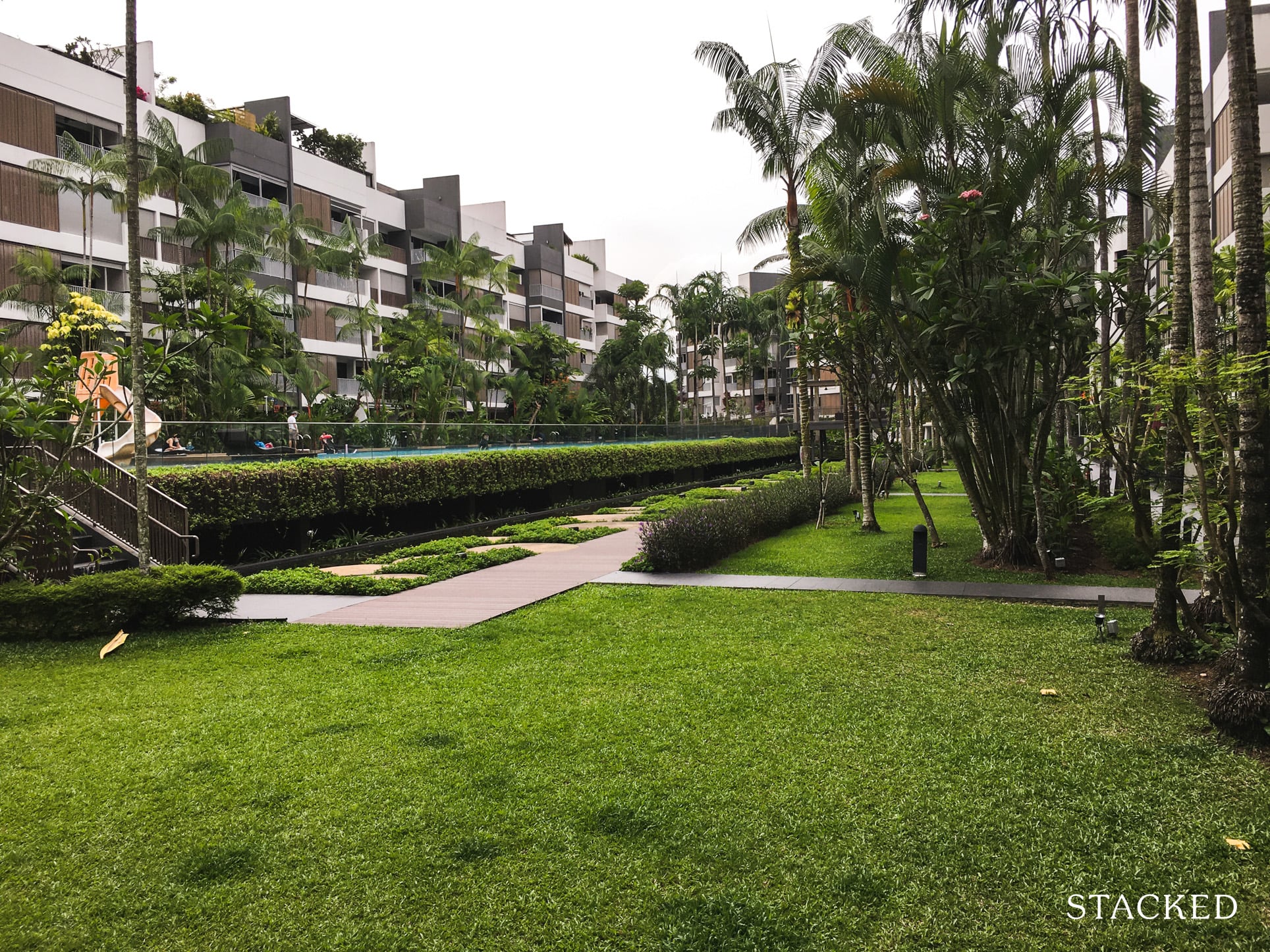 A 479 unit freehold development by UOL, Meadows @ Peirce actually reminds me of a modern version of Clementi Park (but located in the D26 Thomson/ Lentor area). Both are:

Driving down from town to Meadows @ Peirce is a lovely journey: the road is long, wide, and, at some parts, lined by nice leafy trees. It’s definitely one of the nicer roads in Singapore to drive along, and you almost feel like you are on a driving holiday somewhere else. However, there are also a lot of cyclists who like to enjoy the ride (as well as heavy trucks and lorries, even on the weekend) so do drive carefully. Another thing to note is that if you’re driving from town via Adam Road, you’ll have to U-turn back to get to the condo: it’s not a big issue though, as there’s a traffic light right in front, so it’s an easy turn.

Meadows blends in very well with its green surroundings. In fact, there are so many trees outside it that you almost don’t realise there’s a condo there. The foliage actually blocks the name of the condo. It’s not a problem for residents, but your guests may end up overshooting the condo the first time they visit you.

One thing that immediately struck me was how, despite its size, Meadows only has ONE car lane for both entering and exiting the condo. This will probably result in lines to enter and exit. I was there at 7ish in the morning on a Saturday and there were 2 unfortunate cars who had to wait behind me (on the main road) whilst I registered with the security guard. Given how many people order stuff online these days, this could be a regular issue when residents return home. (Exiting the condo also resulted in queues, as Upper Thomson Road is a busy road, so cars can’t turn out immediately. There is another entry/exit point into the condo, but it wasn’t in use both times that I visited.)

The car park, I am happy to say, is more than adequate and this is one of the few newer developments that have a decent number of visitor lots (fully covered parking for residents and outdoor (parallel) parking for guests).

However, it is the facilities, which are both well-planned and beautifully landscaped, that truly impresses about Meadows @ Peirce. You often hear condos claiming that they offer resort-like living but Meadows is the first condo I’ve visited that really brings the feeling to life. I’ll let the photos do the talking below.

The facilities are elevated above the road level, which helps to insulate them from the traffic noise (Upper Thomson Road is very busy) as well as afford the residents more privacy. A friend’s parents live down the road and the proximity to Peirce Reservoir means that they get the occasional wild boars wandering over – although we had 1 swim over to Malaysia earlier this year, I’m not sure if they’ve learned to climb steps yet, so perhaps this won’t be an issue here?

However, there is a playground right in front of it, so in terms of internal-facing units, it’ll be hard to find a truly quiet unit, as one wing has the kids ‘pool and the other the kids’ playground. Both times I visited, the facilities were not crowded but the noise level was high enough that the internal units would definitely be able to hear everything very clearly. (Although to be fair, the noise coming from some of the units was actually louder than the kids!) 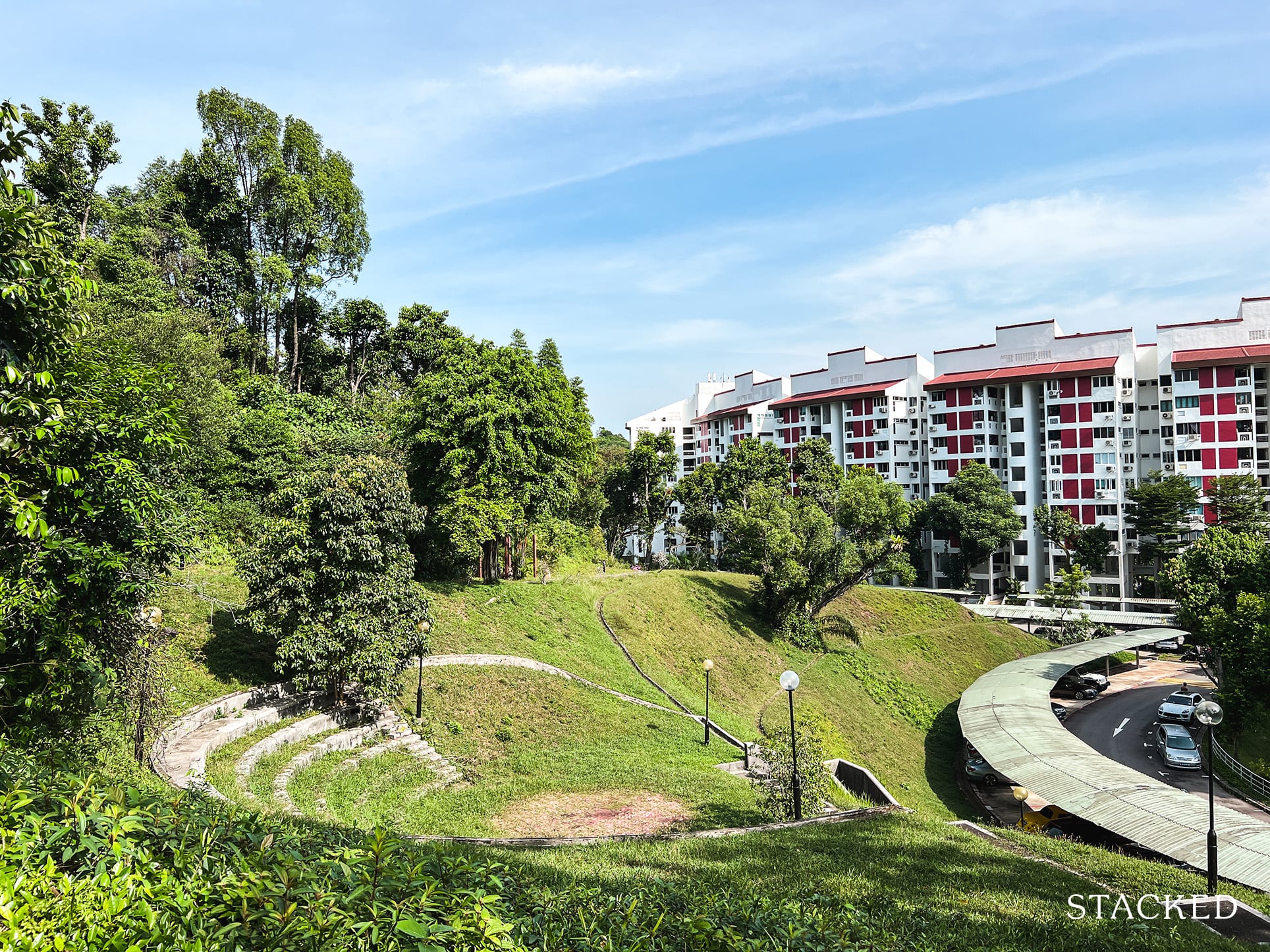 Property StoriesTouring Clementi Park Condo: A Giant Development With Its Own Hill And Park + Freehold

I like the fact that there are more than one of most types of facilities. For example, there are 2 pools, at least 2 indoor gyms and 2 outdoor exercise areas, etc. This helps to spread the crowd so that the facilities will not get too crowded. (There’s no tennis court though FYI.)

One thing to highlight is there were some less-than-pleased comments about the upkeep of the condo when it first TOP-ed but I didn’t see any issues on my 2 visits.

On the contrary, everything looked rather immaculate! I don’t know about where you live, but the gardeners at my condo are nowhere as neat. Despite being on the ball, the management didn’t seem super restrictive as many of the ground-floor units had some form of personalisation (e.g. some had custom flat unit signage whilst others used the green strips in front of their flats to grow the plants they wanted, etc)

Another thing to note is that although Meadows is often linked to “tranquil” living, the road-facing units probably are anything but. The sound of traffic was incessant both times I visited. There was a marked contrast in the noise levels of the “front” (bordering Upper Thomson Road) and “back” of the development (bordering Teachers Housing Estate).

There are quieter units that overlook the landed houses but you will get partial morning and afternoon sun. If you’re looking for a unit that is purely North-South facing, these would be the internal-facing ones (numbers: 01-11 and 45-55).

Before we go, here are some final points for you to note about this condo:
Meadows @ Peirce is 1 of at least 3 condos that do not permit smoking even on your own balcony. The management does seem quite active here, as there are many signs stipulating what should/should not be done in the common areas. (For example, in the seating area by the pool – in between the internal-facing units – there is a notice asking people to keep the noise down.)

We’ve now come to the end of our tour of Meadows @ Peirce. If the development has caught your eye, do note that there were only 5 units for sale at the time of writing (and 2 for rent.) Join me again next week as I look at townhouses!