Property Stories Touring Frankel Estate: Freehold Living In The East For Foodies Next To A Park Connector 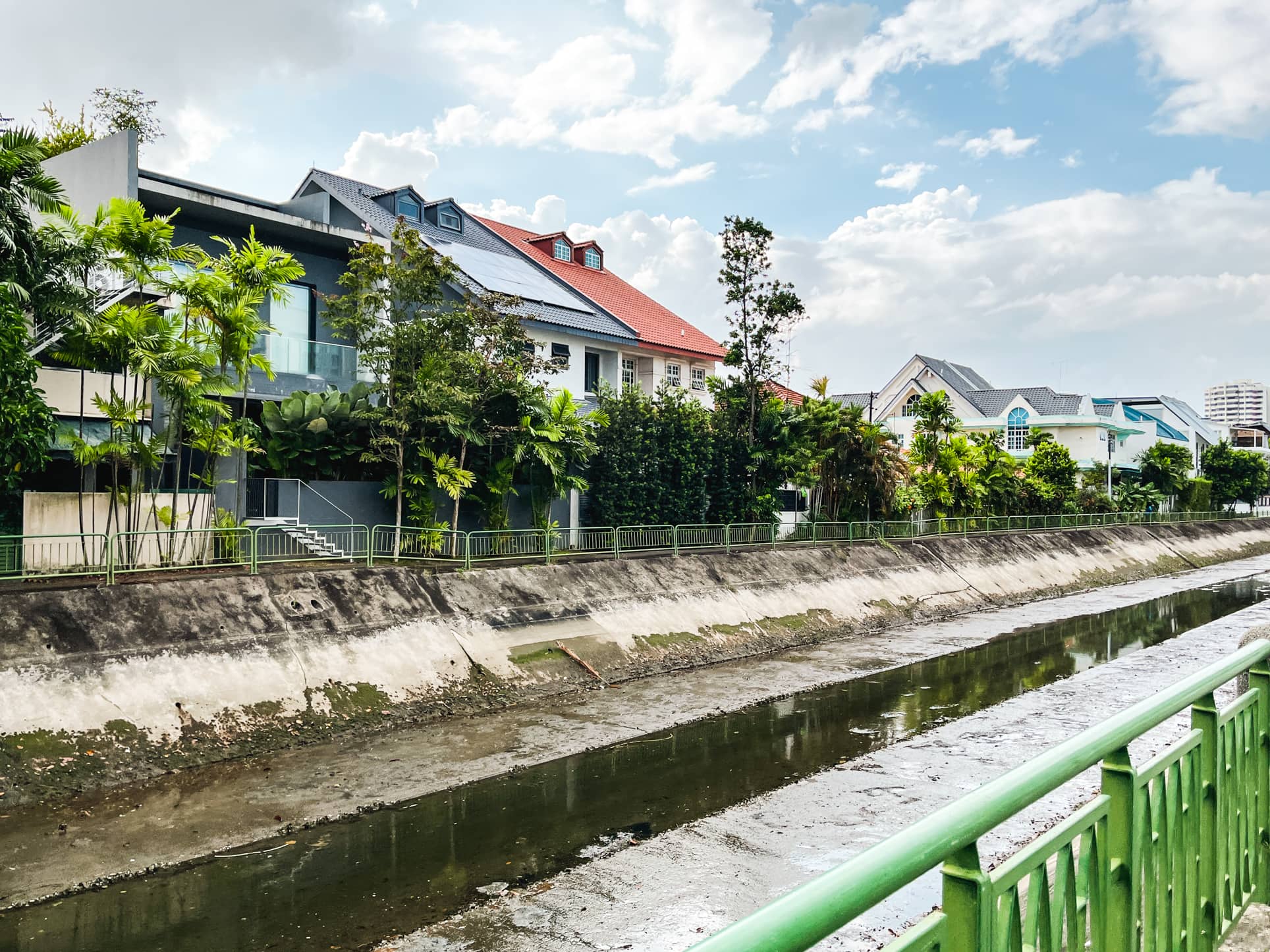 This week, we’re back in the East at Frankel Avenue. My first thought on seeing the area was “Hmmm, this reader has a bigger budget!” If you’re wondering why, the tour of Frankel Avenue was actually requested by a reader and many of the houses there are big semi-Ds and detached houses. Within “Frankel proper”, I’m only looking at the streets with “Frankel” in them, most of the terrace houses are confined to Frankel Terrace, which is the road closest to the busy Changi road (it’s the noisiest of the Frankel streets!)

As there are lots of landed houses in this area, I concentrated my tour around the area with streets with “Frankel” in the name: Frankel Terrace, Frankel Close, Frankel Walk, Frankel Drive, and Frankel Street. These traverse Frankel Avenue perpendicularly. On the West of Frankel Avenue, they are cul-de-sacs that overlook a large drain and Siglap Park Connector. On the East, the streets lead onto Siglap Plain and Siglap Avenue.

When I checked the prices of the houses here, the cheapest was around $5 million at the time of writing. (There were a couple of cheaper houses that were advertised as “Frankel Estate” but, on checking the exact location, were really more in the Kembangan area.)

If you’ve been following this landed estate series of articles, you may have noticed that the areas with larger houses usually come with nicer streets and this is the case at Frankel. The streets are less cluttered, have fewer parking problems, and are easier to drive through. Note, I’m not saying every road is spacious, but that, in general, the roads are less crowded than other estates with smaller houses (and in which house owners end up having to park their cars on the streets.)

As mentioned previously, Frankel Terrace is the Northernmost “Frankel” street and thus closest to the busy Changi Road.

At this junction, there are a couple of shophouses.

There are 2 Thai restaurants in the shophouses across the road, along with some office units (an event planner, interior decorator, and the like).

Whilst the shophouses to the West of Frankel Avenue consist of 2 bicycle shops, a pet shop, a massage shop, and a household goods shop (think taps and a variety of fittings).

Frankel Avenue reminds me of a less busy version of 6th Avenue. It’s quite a busy road: there are 2 car lanes in each direction, so 4 in total. The traffic wasn’t as bad as 6th Avenue, there were enough lull moments that one can easily get over to the other side. Which is good as I didn’t see any zebra crossings/many traffic lights to allow for easy crossing of the road. However, there is enough traffic that the hum of cars is constant.

As you can see from the above photo, the pedestrian pathways are quite narrow in places, so it’s not a very pleasant walk along this road (and will be difficult for prams and wheelchairs.)

There is also a Caltex station on Frankel Avenue and an Esso at the junction where it meets East Coast Road. Along East Coast Road, there are obviously many more eateries, such as Isa Your Local Izakaya Bar, Fu Lin Tofu Yuen, Beach Road Prawn Noodle House, etc! (No wonder a reader who lived in the East left a comment on my West Coast article saying that the West Coast doesn’t have many food choices!) 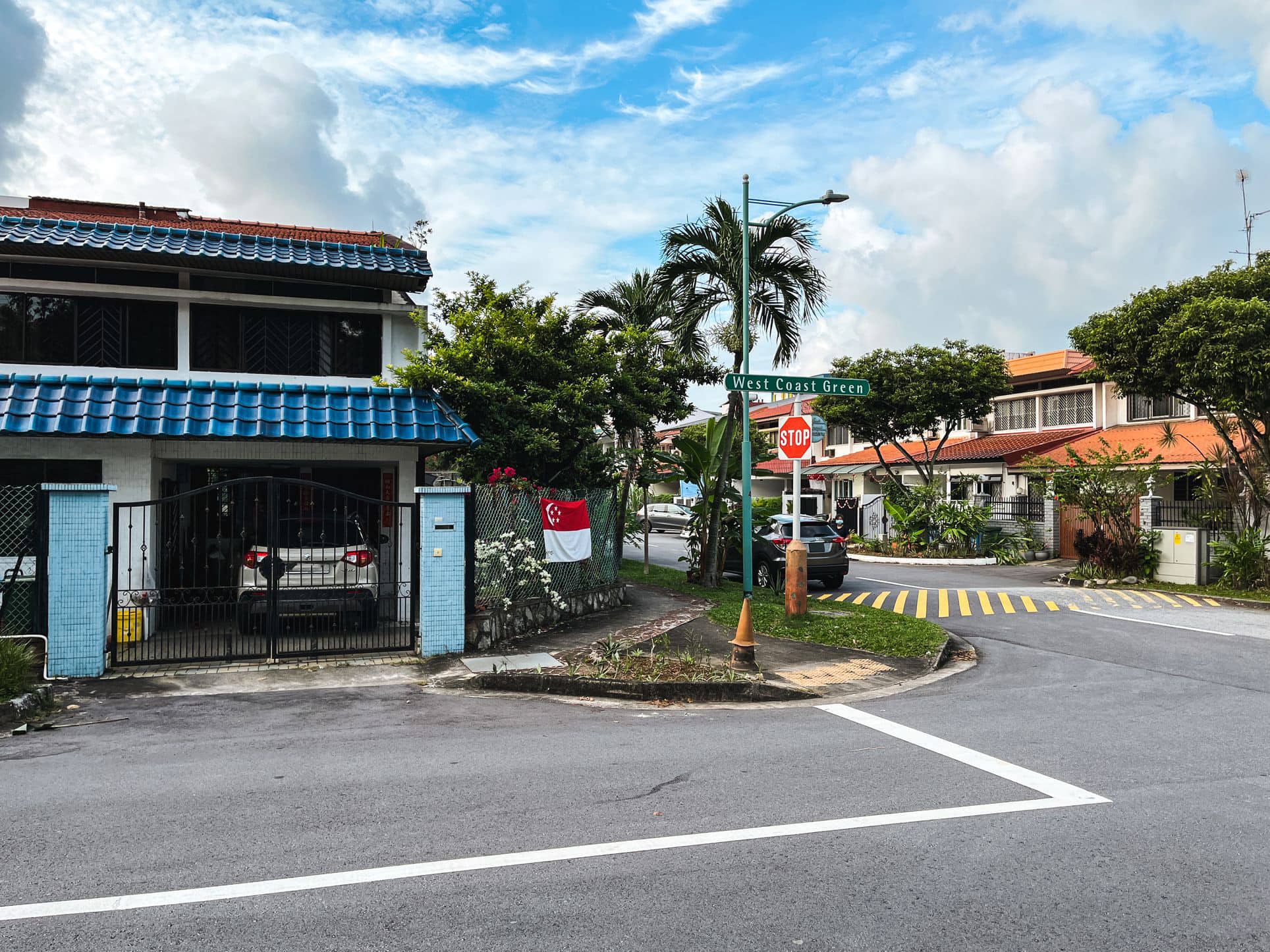 One of the nicest things about Frankel Estate is the proximity to the Siglap Park Connector.

There are bridges to help you cross to the other side easily (as the path on the Frankel side is super narrow) and that connects you to Telok Kurau and Joo Chiat Place.

There is an Old Folks Home on the Telok Kurau side, landed houses, as well as the many boutique condos that Telok Kurau is famous for. However, as the condos are low-rise and they’re separated by quite a wide canal, they don’t loom over the houses on Frankel Avenue (i.e. I don’t believe the light and ventilation will be affected.)

Fun fact: One Kind House, which provides local cooking classes and sells Peranakan food, is right next to Telok Kurau Park! I reviewed it in this post on Activities in Singapore for Foodies if you want to find out more.

Now that we’ve seen Siglap Park Connector, do you agree with me that it’s a great addition to Frankel Estate? Either way, it’s time to cross back to the Frankel side now.

Only 1-2 look like they’ve been rebuilt. (Obviously one of the rebuilt units is the one on the left of this photo!) Note that across the Park Connector from these terrace houses is an Old Folks Home and a temple. So these terrace houses have the busy Changi Road up North, the Old Folks Home and temple on the West, Frankel Avenue on the East, and other bigger landed houses to the South.

Those interested in rebuilding will obviously be interested in the plot ratios of the area (see above.) On the subject of rebuilding, do note that there may be many future construction projects in the neighbouring Telok Kurau area, as the houses there are zoned 1.4 (so they have the opportunity to group together and sell their houses to a developer to build a small condo.)

As previously mentioned, Frankel Avenue and its surrounding streets rank pretty highly when it comes to public transport (which is where many landed estates fall short). There are 3 buses plying Frankel Avenue which take you to Bedok Interchange and Kembangan MRT. Moreover, Kembangan Avenue is only about 15 minutes walk away (or less depending on where your house is situated.)

On Frankel Avenue, you find pre-schools and daycare whilst for older kids, there are several schools in the vicinity including St Patrick’s Schools, Saint Stephen’s School, and Opera Estate Primary School. The latter 2 are Primary Schools under 1 km from most of the houses (on the “Frankel” named streets) but do check if you’re interested in a particular unit.

Regarding places of worship, although I didn’t see a mosque on Frankel Avenue (there is a church and 2 temples), there are several North of Frankel Avenue. The closest, Masjid Kassim is barely a 5-10 minute stroll away.

If Telok Kurau Park is too small for you, a 30-minute walk (mostly via the Siglap Park Connector) will bring you down to East Coast Park, which is great for sporty types and nature lovers.

For shopping, you have Kembangan Plaza up North, and Siglap Centre down South. Both aren’t large modern shopping centres but they get the job done. You can find a 24 hour MacDonalds, florist, optical shop etc at Siglap Centre and a Chinese Physician (apparently famous according to Google reviews), clinics, salons etc at Kembangan Plaza.

There’s also a Fair Price within 10-16 minutes walk at Lengkong Tiga (slightly past Kembangan MRT) so, all in all, Frankel Avenue seems to have almost everything you need within walking distance!

There is even a small private hospital, Parkway East, within Telok Kurau Estate!

Let us know what you think of Frankel Avenue and its surrounding streets in the comments.

In the meantime, for the other foodies out there, there’s George’s Katong Laksa on Changi Road, a 15 minutes+ stroll from Frankel Avenue. According to reviews online, the laksa here is made from FRESH coconut milk and the rempah is still made with a granite mortar! (If you’re a foodie, you’d know how rare this is in Singapore now.) And by the way, this is a totally unsponsored mention, I just happened to see the stall whilst driving back from Frankel and pulled over as there was a car park lot free! (The signboard reads Eunos (MRT) Bak Koot Teh but it’s a laksa shop.)

There aren’t many car park lots for these shophouses. In fact, when I read the reviews of this laksa stall, many were griping about not being able to get parking, so the residents of Frankel will have the advantage of being able to walk over!

For the curious, this is what the laksa looks like – there’s fresh hum too!

And here’s a quick photo to show you what kind of shops you can expect here. It’s a mix of useful (e.g. restaurants such as Goldhill Hakka Restaurant ) to niche (e.g. pawnshops and an aquarium!)

See you guys again in next week’s tour. I promise not to talk so much about food in the next post (unless it’s a tour of another foodie haven in the East! I figure most people who want to move to East Singapore are fairly interested in the food offerings there!) In the meantime, hope everyone has a great week ahead!

Great article and love the coverage. Frankel is actually a big estate , so will be nice if you cover the siglap plain and dunbar area too, maybe as Part 2?