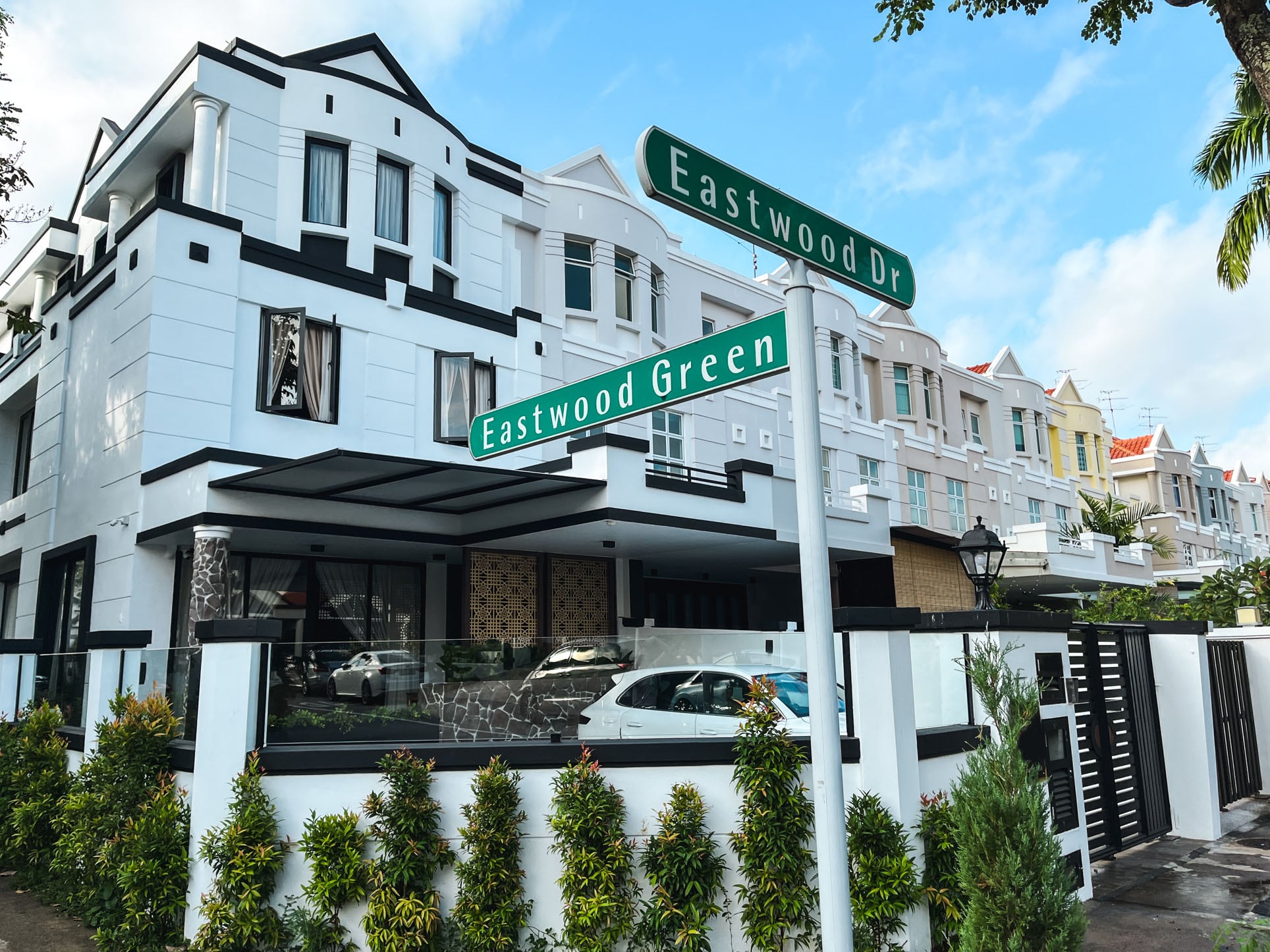 Another week, another reader’s request! This week, we’ve had someone ask for a tour of Eastwood estate so off to the East I went. I had previously shortlisted Eastwood but, after viewing a couple of other 99-year landed estates and finding them super crowded, decided to put it on the back burner.

Hence, I was very pleasantly surprised when I finally visited this small landed estate. The roads are wide, the spacing between the houses generous, there’s a small mixed development (Eastwood Centre, which houses a Cold Storage, Subway, 7-11 etc) and hawker centre next door. All-in-all, Eastwood looks to be a very comfortable area to live in!

Moreover, Eastwood is within 5 minutes of the upcoming Bedok South MRT, which is slated to be opened in 2025. (The downside of the convenience is that the construction is SUPER noisy right now – I could hear non-stop pounding as I toured the estate. In fact, I think there is another construction project near Eastwood besides this MRT!)

Eastwood is also actually not far from East Coast Park, which you can access via a park connector. It’s here that you can find restaurants such as High Tide Bistro and Central Thai.

For the religious, Eastwood is within 15 minutes walk of a temple, a mosque and a church (right beside the estate.)

The only thing to note is: Eastwood is far. It is so far out I actually thought Google Maps was sending me the wrong way! (I kept driving past industrial sites and the journey didn’t seem to be leading to a residential area. But it turned out to be correct in the end.)

There is Sungei Bedok running parallel to the Estate, across which you can find the NeWater visitor Centre and an empty plot of land that has been zoned “Business 2.” On the other side of Eastwood are 2 other landed estates, a couple of condos and the Laguna National Golf Course. I didn’t see any skyscrapers in sight but Eastwood Centre (currently low-rise) is actually zoned 2.1.

Note: there are also many empty plots of land south of East Coast Road, so we can expect lots of future changes to this area.

Seeing how there are so many other landed houses around Eastwood, I figure many people will be curious to know how much Eastwood costs relative to the surrounding areas. At the time of writing, a 99-year terrace house at Eastwood was asking $2.8 million (with a lovely double volume ceiling in the living room) and 99-year semi-detached houses from upwards of $3.48 million. 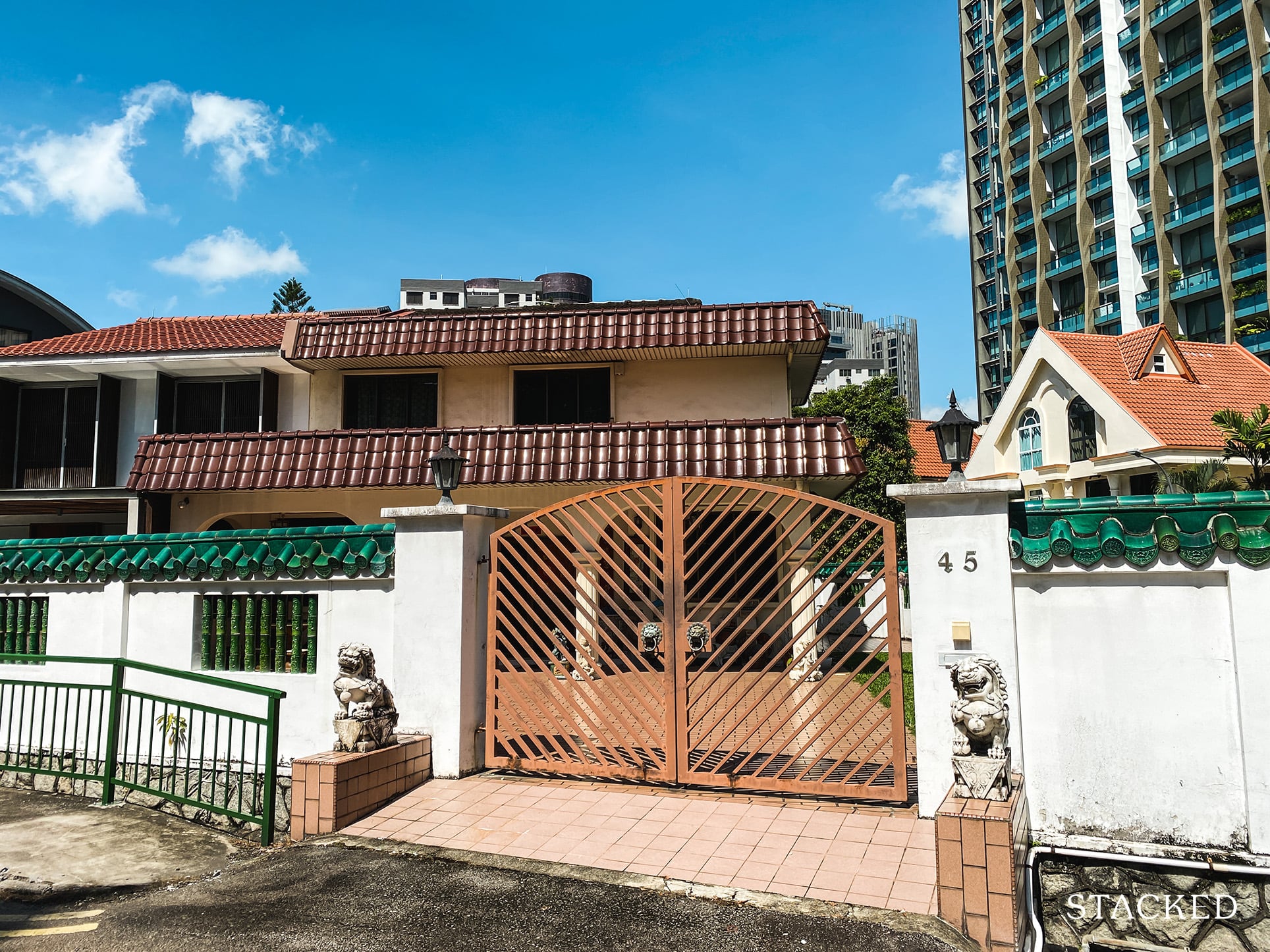 In comparison, these are the prices (at the lower end of the scale) of the landed houses in the neighbouring areas:

One thing I liked about Eastwood (besides the spacious and easy-to-drive/walk-through roads) is how “neat” the area is. Probably because the area is a 99-year leasehold estate, most of the houses have a uniform look. Many people find it too expensive to completely rebuild a 99-year house when you’re effectively only “renting” it. It can be a little garish when every house on the street is of a different size, height and width!

But it doesn’t mean the area looks boring. As you can see, the different sections/roads in the estate have houses built in different styles, but they don’t look out of place. I really like the big arched windows here. Getting enough light probably isn’t a problem for these homeowners!

I’d also like to point out how some of the terrace houses here are large enough to park 2 cars. You may think I talk too much about parking in my landed tours, but if you’ve ever lived in a small landed house with parking issues, you’ll understand why I harp on so.

Others are less ideal if you have mobility issues in that there are steps leading up to the front door (which can make getting around hard if one is in a wheelchair or pram.) There are also those built in the old style, with split-level living and dining areas (with steps separating the 2.)

Almost every cul-de-sac that is parallel to the main road has one of these, so you can just walk straight out. (Unlike other estates, such as Gerald Drive, where you have to make a large detour to walk out to the main road.)

Note that quite a few roads are a single white line here, so if your visitors are scrupulous about such markings, they may struggle to find parking space.

Many of the people who look at 99-year landed houses typically have several kids (as they need more space.) Unfortunately, Eastwood doesn’t appear to be the best estate when it comes to Primary Schools. There doesn’t seem to be one within the 1 km mark. According to yoursingaporemap.com, the closest is Temasek Primary, at 1.185 km away.

If your kids are teenagers, you’re in luck as Bedok South Secondary School is just across the road. At about 0.6km away, it’s close enough that your kids can walk to school, but not so close that the noise will interfere with your daily life.

Note: on the subject of noise, Eastwood is very close to Changi. I didn’t hear any planes when visiting but interested buyers might want to check the flight path of planes first, if they’re noise-sensitive.

Those with kids will be happy to hear that Eastwood has its own large playground.

Note: some of the houses around the playground have back gates with direct access to this area.

Now that we’ve finished our tour of Eastwood, how did you find it? Personally, I found it rather nice. It was well-spaced, had lots of greenery, not too much traffic, had shops nearby, well-kept (the homeowners took pride in keeping the gardens and road looking nice)… All in all, a great, convenient place to live – assuming 1 goes to school and works in the East, that is!

Let me know in the comments if there’s another estate you’d like covered and see you again next week!

Hey, could you review Westville at Jalan Bahar?

Yes, Westville will be interesting too.

hi! Really enjoyed your article and the tours you provide. Would like to add that East Wood’s closest MRT is Sungei Bedok Mrt which is at the Bedok Corner Hawker, not Bedok South MRT. so thats probably the construction youre hearing.