Property Stories Loss Aversion: Why Do People Fail To Act During Downturns

Afterall, one of the strongest fundamentals of savvy investing is to ‘buy low’ and ‘sell high’ right?

So when the going actually gets rough (as we’ve no doubt seen in recent times), where do the good folk who were previously chivalrising that beautiful notion disappear to?

For one, you’ll find an enterprising group, tirelessly scouring the markets – cash in hand for instant deployment into low-cost, high-potential deals.

Sadly, you’ll also find an unfortunate few hanging on for dear lives – clawing at every financial option within their grasp to make ends meet.

There is also a third group.

A group that the majority of us often fall into. A group that sits quietly and waits for the storm to pass so that they can carry on with their lives in a healthy economy.

Now I’ve found myself in these 3 groups as I (try to) navigate the meanders of life.

And I can tell you that finding yourself in that second scenario is no joke simply because you’re at the mercy of the wind – often with little ideas on how to climb out of the current predicaments you’re facing.

Neither am I saying that being in that group who is constantly redeploying cash into these ‘low-cost, high-value’ assets will necessarily guarantee success. Not at all.

In fact, make one wrong deal with a substantial amount of cash, and you can say goodbye to that dream of traveling the world in your twilight years.

Yet, having weathered these diabolical periods – first in the dot.com crash, and then in the financial crisis on 07/08, I’ll tell you right now that my biggest regret was always falling into that third group.

The group that listened, watched, waited… and simply carried on – despite having the potential to make some key investments during that period that would set us up for life.

I didn’t fall into it once. Or twice. Or thrice.

No. In fact, it happens to me even today.

Despite all the countless times that I’ve missed out on these incredible investment opportunities – only to see them wildly appreciate over the coming years, my investment mind still freezes in the face of downturns, simply because I’m too afraid to lose all that hard-earned dough to a silly mistake.

And I’m sure that this is a feeling something that most of you would resonate with.

That I’d rather keep my hard-earned cash, than risk squandering it all away for a chance at better prospects – minus that 9-5 grind.

It also brings me to my topic today.

“Loss Aversion: Why do we fail to act in downturns??”

The Loss Aversion Bias can be described as the tendency to fear the psychological pain of loss, MORE than the pleasure of gain.

In fact, studies have shown that individuals react twice as strongly to loss – as compared to profit!

So what can this lead to?

And yet another window of opportunity closing shut.

Here’s an example that I came across not too long ago:

Here, we compare 2 similar sized units at the Sunglade Condominium – one directly above the other.

The 1st resale transaction for this unit occured 4 months before Singapore was officially declared in recession (in the middle of the ‘07 to ‘09 Global Recession).

On the other hand, the resale transaction for this unit occured 2 years 4 months after PM Lee Hsien Loong announced the worst of the recession was over (National Day Rally, 16th Aug 2009).

Now I’m not saying that both units were identical interior-wise (for all you know, unit 2 might have a built-in fountain of wealth that we have no clue about) – but as was most likely the case, this scenario shows us how substantial a profit (219% appreciation) you could make if you do decide to avoid panic sales, or in the case of buyer #2 of that first unit – to take an investment plunge during a downturn (42% appreciation). 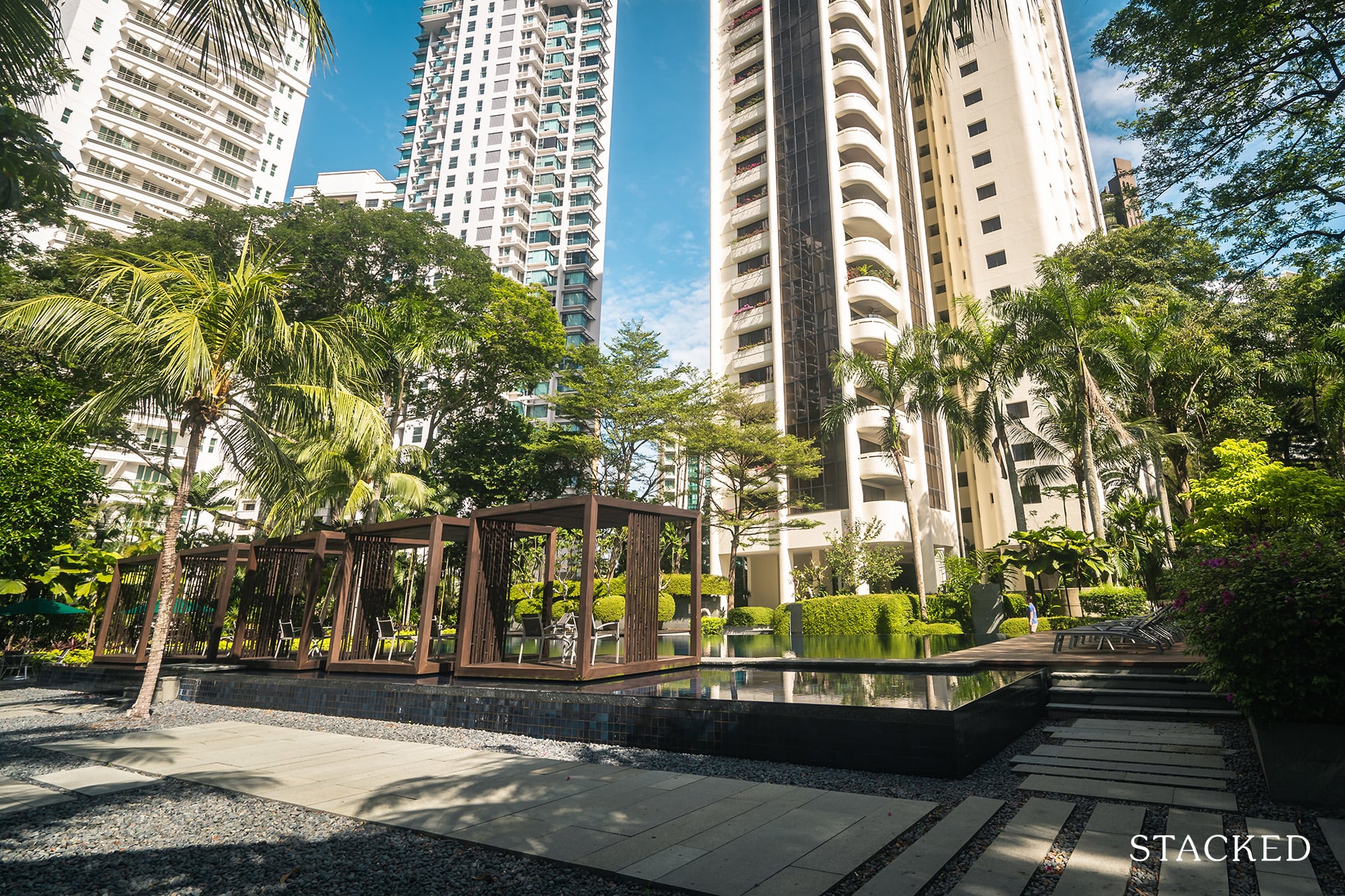 Analysis$6M Profit!? – The Biggest Winners From The 08/09 Property Market Crash

Of course, real estate investors and regular home-buyers will naturally ponder the risk of investing, or even living in a property ‘currently worth’ less than its mortgage – with fears that the valuation of the property will not climb up as fast as they would hope (or worse, having to later sell it at a loss).

But here’s where it gets interesting.

While our concerns are definitely warranted, the study that was mentioned earlier (conducted by American social psychologist, Daniel T. Gilbert in 2006) concluded that “Loss Aversion is actually an Affective Forecasting Error”.

In this study, participants showed that, compared to winning, losses were seen to have greater impacts emotionally.

So what does that mean for us?

And often, this fear paralyses us from making our rightful gains.

What else stops us from… ‘making gains’?

Before we get to the solution, let’s have a look at another factor that contributes to this hesitancy of action.

You see, just like in the world of stocks, too many of us are focused on timing the property market (especially in downturns). Or in other words, waiting for the BOTTOM of the drop.

And that is something experienced traders/investors refrain from prioritising because gauging exact figures in a relatively unpredictable market is near impossible (not to mention destructive).

You will hardly ever be sure when a share has bottomed out – even less so when settling on the right price/time to sell.

And let’s face it. If you’re going to call yourself an investor, and hope to even make some form of returns in the future, you have to apply some risk (while doing this with well-backed methods/findings of course).

Let’s take this back to real estate.

Watching the prices too closely, and squinting at your screen to spot the perfect time to buy, WILL leave you waiting on the sidelines.

Price rises? You regret your decision to hold back. Price falls? You hesitate to make a commitment. Either way, zero actual attempts are made to make the purchase.

And you don’t get any returns (or losses for that matter).

The big money question gets a super saver answer.

“What if I’ve succumbed to loss aversion?”

What is my solution?

Methods for the wary

We’ve seen the figures, heard the phrases – and really, we all want to make the best of the situation.

But the whole reason most of us don’t take the plunge is because we are afraid of the risk and consequence.

So for those of us who are really afraid of taking the plunge, the ideal scenario is to reduce risk while preparing for consequences.

Here’s a method that can be used to reduce the risks.

While Singapore’s property prices are relatively stable, we have seen some properties depreciate over the years (the Urban Resort comes to mind).

So how can we stomach these potential dips?

By always ensuring a relative margin of safety (MOS) – aka, doing good research.

And let’s face it, looking for Singaporean properties well below their valuation is almost a thing of the past. Houses are expensive, and almost all property owners have a good grasp of what their houses should be sold at.

Not to mention, the governmental measures already in place to mitigate sudden financial losses to property owners which, while most certainly would have led to fire sales in the past, is no longer the case today.

So what does my Singaporean-style MOS entail?

Do we know where and when the fire sales will be? The truth is, we don’t.

But we should know what they are based on our individual Margins of Safety.

Summary (A few other tips & tricks)

I know the words can get a little chunky, so here’s a simplified/compiled summary of tips previously mentioned on tackling loss aversion, plus a few more:

Final Word (A look at our current situation)

Just like the ‘08 and ’09 Recession, and even the Dot.com crash before, things will not stay down in the dumps forever.

The negative impacts of this pandemic are undeniable, but it doesn’t mean that you shouldn’t continue or even begin investing in good assets.

At the end of the day, there will always be risk involved – learn to recognise the loss aversion bias that everyone has. Reluctancy to secure a property simply because of passivity just means the money won’t generate returns elsewhere.

As William Arthur Ward said, “Opportunities are like sunrises. If you wait too long, you will miss them.”

Excellent piece Reuben. I was looking to buy during the 2008 crisis being several years into my career and looking to start a family soon. I was lucky enough to be able to consider buying a condo then, but the crisis hit my workplace quite badly. While I managed to retain my job there, there was just too much uncertainty to make a purchase. While the crisis unfolded, it was hard to see the bottom – like it is now with Covid-19. Back then before Lehman Brothers collapsed, news after news just kept coming out like never before. My wife… Read more »

Hey Peter, thanks a bunch for your lovely words. I’m so sorry that you had to bear the brunt of the recession, and I’m really glad that we both managed to pull through despite all the odds. Looking back it almost feels surreal, but it was no joke for us back then, that’s for sure. I think many people have hinted at the possibility of a housing price bubble in Singapore, but unlike the subprime mortgage crisis which we saw back then in the US, we do have a ton of measures in place to prevent these sudden declines to… Read more »