Property Stories How I Earned Bitcoin From MapleStory In 2011: The Rise Of Crypto And The Metaverse 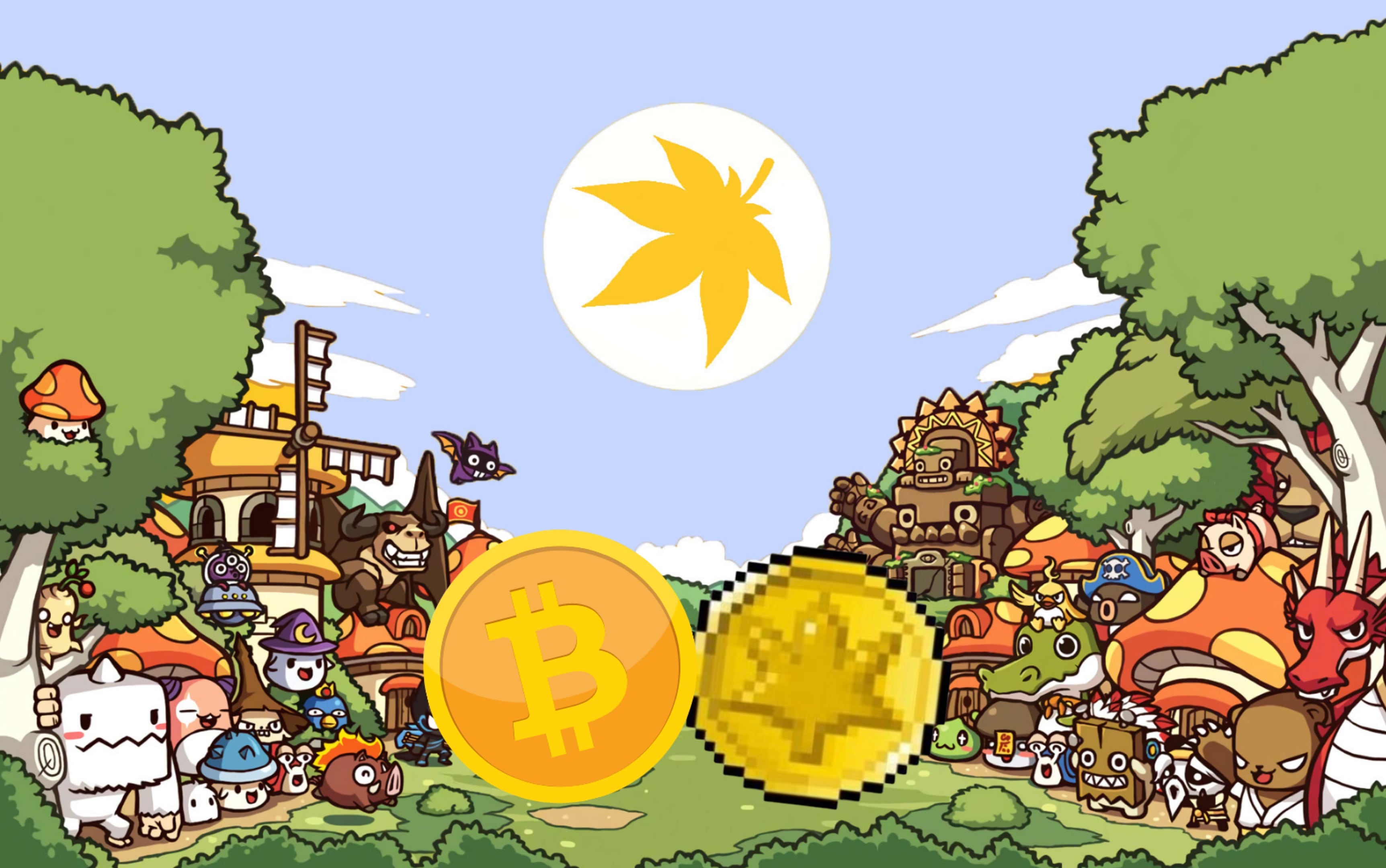 I guess you could say I am lucky. Maybe being lucky is an understatement.

In the year 2009, I remembered being FOMO-ed into creating an account for an online multiplayer game called “MapleStory” – everyone in my school was so fanatical about the game that I felt like I NEEDED to know what was it. I knew it was at the peak of its hype when I received MapleStory red packets from my relatives that Chinese New Year.

For those who are not familiar with the game, MapleStory is a massive online role-playing game (MMORPG) that users can create their character and choose the type of powers they wanted. This will represent the player’s avatar in the virtual world to complete quests. It could be played solely individually or alongside millions of other players in the world.

Naturally, the need for better inventory to complete quests rose, which led to users flocking to the “Free Market”. This place allows users to buy, sell and trade items with each other. You could either transact with the programmed merchants (they had fixed prices for their items), or other players (that led to more room for bargaining). You get the gist.

I was roaming in the Free Market one day trying to sell off a large portion of my inventory when I came across a player who really wanted most of my gear and he basically offered me an insane number of Bitcoins for the whole lot of it (that guy must be punching the air right now). Let me remind you, this was back in 2011 when 1 Bitcoin was worth around US$0.70.

I was pretty easy-going and accepted the coins that he offered (albeit I had no clue what it was), and just kept it in a virtual wallet that my friend helped me set up on my laptop. Not sure why, but I forgot all about it and just left the coins in that same wallet for the next 8 years.

The next time I heard about Bitcoin was in 2019 when many of my University friends were discussing the concept of “Cryptocurrency”. “Bitcoin” was apparently one of its stable coins and I felt like I was transported back to the Free Market in MapleStory back in 2011.

Can you imagine my excitement when I got home that day, trying to retrieve my wallet and realizing I’m the owner of those coins? Ma, I (kind of) made it.

The Most Expensive Pizza In History

I came across a similar story where a man in Florida paid 10,000 bitcoins for two pizzas, which was recorded as the first commercial transaction with digital coins (he must really be punching the air right now). A story so ludicrous sounding today that it is now more famously known as Bitcoin Pizza Day.

Although to be fair, that was back in 2010 and he would never have known then that it was equivalent to $600M in today’s values.

What I realised from my experience with the crypto scene was that just because something is not tangible does not mean that it is worthless. Value could be anything, value could be digital. So long as both parties in the transaction agree upon the value then that’s an indisputable fact.

A Singaporean crypto-whale bought over legendary Beeple’s non-fungible token (NFT) artwork at a whopping $69M, transacted by Christie’s auction house. Value has already morphed into a completely new meaning, fueled by the technology that is available to us now.

(This is just a screenshot, I don’t own it, unfortunately)

It is not absurd at this point to think that virtual currencies are progressing to be the norm. Maybe it could have stemmed from gaming, but it definitely has an impact on economies and day-to-day life. Given the growth trends of the gaming industry today, it’s an easy bet to see this have even further implications.

Parallels Between the Metaverse & MapleStory

Video games have paved the way for cryptocurrency, digital ownership, and virtual assets. MapleStory’s achievements show that the Metaverse can actually be a huge draw. Even at the beta level, investors are already paying millions for virtual land in the metaverse.

Stange that I immediately saw the appeal of building an online life and virtual assets in a virtual world. Money is money, right?

Both MapleStory and the Metaverse offer the same concept of gaming in another digital world (escapism, perhaps even addiction), completing quests solo or alongside pals, trading, and upgrading inventory gear. On top of gaming offerings, the metaverse is growing to include social and business settings with extremely immersive VR and AR technology. The main coin that is powering this new era is mainly ETH and its own platform coins (e.g. MANA, SAND), but I’m sure more coins will spring up in the near future.

Countless cases have shown that consumers are willing to spend fiat currency just to upgrade their gaming experience. See the $20,000 credit card bill that a daughter left her father just from upgrading her avatar on a game called Genshin Impact? Facts.

Even during my time in MapleStory, my peers have already been spending hundreds to thousands of dollars just to play the game. It could be for bragging rights, but all I know is that it has happened before and will happen again.

Meta (previously known as Facebook), hopes to bring the metaverse to go beyond entertainment. They aim to create virtual spaces where people work, live and experience for all ages. The opportunities from the metaverse are limitless, be it for companies, or consumers.

As Zuckerberg said himself, “You can think about the metaverse as an embodied internet, where instead of just viewing content—you are in it.” Whatever your thoughts are about Facebook, it’s undeniable that this is the future.

Imagine walking down the street in a virtual world. Suddenly, you remembered your friend’s birthday coming up the next week. Immediately, a shop appears, with a range of cakes for you to choose as you fancy. You select one, and it gets shipped to your house.

Even giants like Samsung and Adidas have decided to move their presence to the metaverse. Fashion companies have also been very active. For example, Burberry collaborated with Elle Digital in Japan to allow customers to browse and shop in a virtual version of their store.

Opportunities come as fast as they go. The metaverse could be another ROI opportunity on steroids, similar to my experience with MapleStory. Existing in two worlds at the same time is part of our impending future – that is something that I don’t doubt. However, the reach and speed of adopting this technology depend on several variables.

To rival its predecessors, I believe that the number of monthly active users is important in deciding the scalability and adaptability of the metaverse. Headsets from companies like Oculus are expensive, and there are many software bugs and poor resolutions that affect the VR experience. Add-ons like VR Metaverse gloves price many out, and tech to complement the complete immersion in the game could still be some years away. I’m still excited though.

Before I end this, here’s a tweet that I saw – could be helpful.

People forget just how completely non-obvious the entire digital revolution was every step of the way.

Till then, I’ll continue looking out for opportunities. Hope to see y’all in the Metaverse soon.

Cheryl has been writing about international property investments for the past two years since she has graduated from NUS with a bachelors in Real Estate. As an avid investor herself, she mainly invests in cryptocurrency and stocks, with goals to include real estate, virtual and physical, into her portfolio in the future. Her aim as a writer at Stacked is to guide readers when it comes to real estate investments through her insights.

Hello Cheryl, I wanted to tell you that I enjoyed reading your articles. 3 written articles in on Stacked and I already see you have a signature brand of humor and story telling which I absolutely adore.

I also noticed in your profile that you write about international properties. I’m based in SG and due to collect my keys for a small shophouse type property in Christchurch City centre. Would love to hear your thoughts on this rather unconventional investment.

Hey Sean, Cheryl here! Please know that your comment made my day (or even week). Glad that you’re enjoying Stacked’s content! Congratulations on your new key – I’m excited for you! If it’s a shophouse, would that be somewhere along New Regent Street? Rental shouldn’t be a big issue since the amenities around the area seems great. Also I love the fact that taxes are pretty lax as compared to other countries. But I’d be wary of climate (make sure your property is well covered by insurance) and make sure to have a well-planned timeline, considering that there restrictions to… Read more »