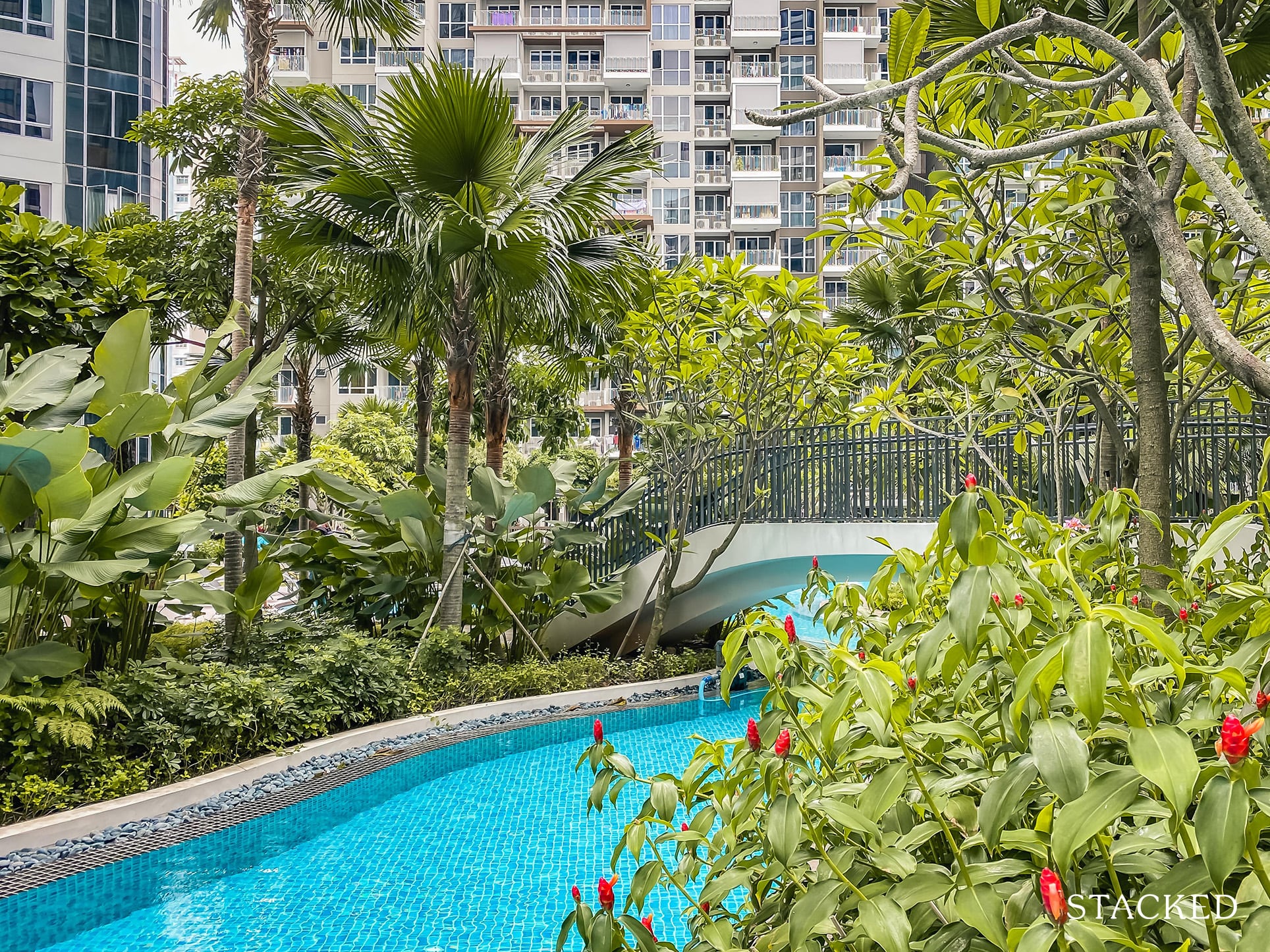 It wasn’t all too long ago that some of these OCR condos would have been described as “far-flung”. But for some, with the ever-reaching networks of the MRT or the “positive” effects from Covid-19 (the ability to work from home, if you’re wondering), means that for those who always wanted to live centrally can actually now consider some OCR condos as viable options.

You don’t absolutely have to live near Orchard and the CBD (and Singapore is decentralising anyway), so here on the fringes, there are good condo options; and with their lower quantum, it could be a more prudent choice at this point.

These are the most recent transactions below $1 million:

La Fiesta got off to a bad start. Residents initially panned the project for issues regarding water seepage and poor finishing. In addition, La Fiesta was under more intense scrutiny than usual, as the developer had received complaints about their last DBSS project (Trivelis).

Nonetheless, you can see from the above that the majority of transactions have been profitable. We understand that most of the major defects were eventually fixed, so hear us out before you discount this condo.

La Fiesta is just up the road from Sengkang MRT station (196 metres, or about a three-minute walk). It’s also within a one-kilometre radius of no less than 10 schools. These are:

As for retail, there’s a sheltered route from La Fiesta all the way to Compass One mall (which has a Cold Storage). Overall, La Fiesta is one of the better located developments – for its price – in the Sengkang area.

La Fiesta is underrated because of its rocky start, and home seekers should do a double-take.

There was only one transaction this year that was below $1 million:

Optima @ Tanah Merah has been in the news a lot lately, but that’s because of a nearby land plot that we covered in an earlier article. The upcoming land plot will house a mixed-use development, which includes some much-needed commercial space for the area (right now the area around Tanah Merah MRT station is quite bare of other amenities). 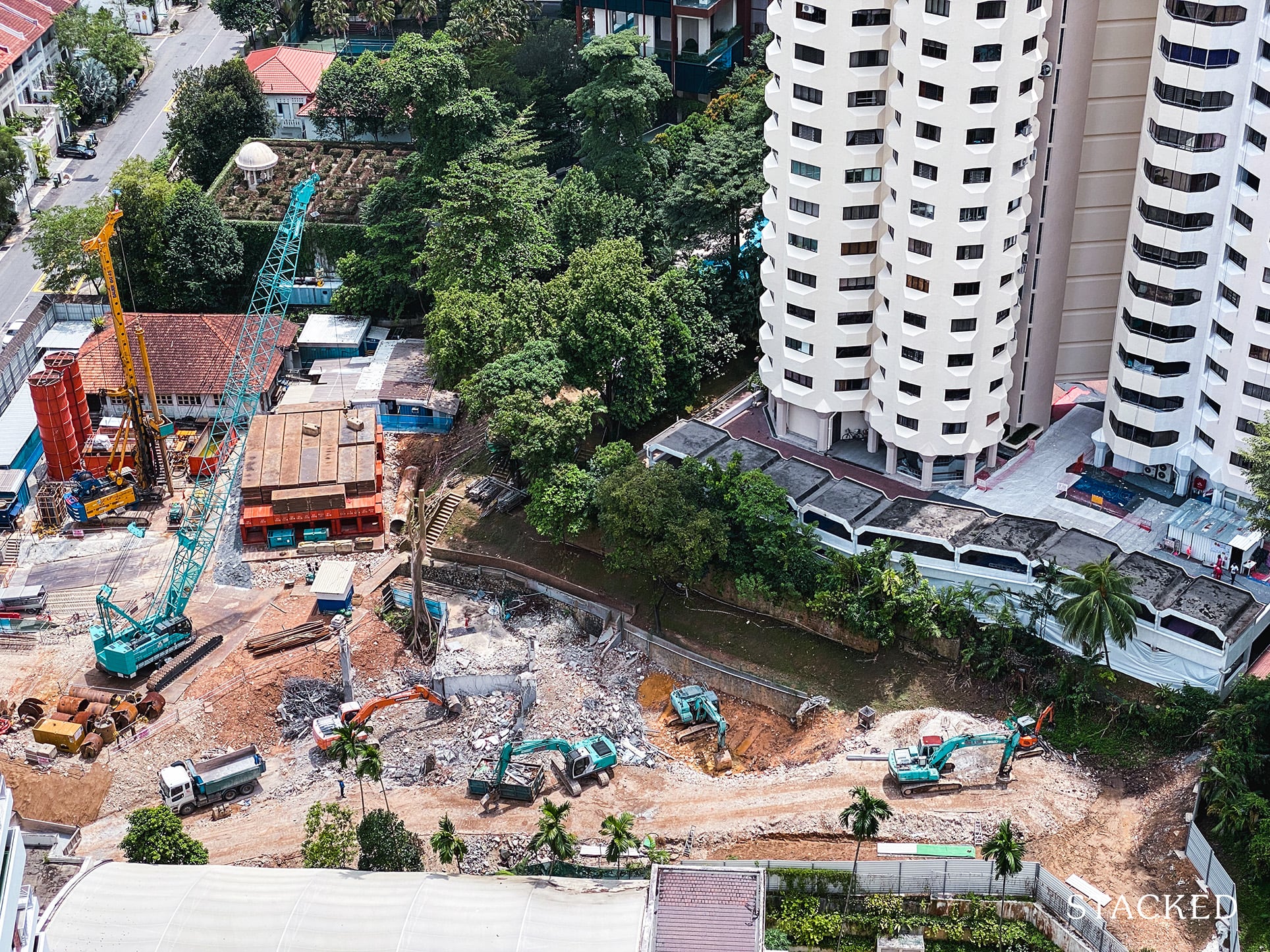 CommentaryWhat’s Driving The Aggressive Bids For The Tanah Merah And Yishun GLS Sites?

Speaking of which, Optima @ Tanah Merah’s main appeal is quick access to the Tanah Merah MRT station via a side gate. Note that this MRT station is a key node: it’s where the passengers switch to go to Changi Airport or the Singapore Expo. As such, there’s good access to places like the Changi Jewel, to residents of this condo.

It also means Optima is in a good place to attract tenants from the aviation / freight industry, working in areas like Changi Airport or Changi Business Park.

The main drawback, however, is that there are already a number of condos in the area; and now the new, upcoming development is even closer to the MRT station (see the link above).

These were the transactions this year that were below $1 million:

MCC Land has a knack for marketing otherwise out-of-the-way properties. When The Nautical appeared in Sembawang in 2012, it managed to sell out 68 per cent of its units at launch – impressive for a Sembawang property at the time.

Part of the reason was that The Nautical is just across from a mall, Sembawang Shopping Centre. The Nautical is also a manageable distance from two MRT stations – Canberra (about 800 metres or a 10 minute-walk), or Sembawang (900 metres, or a 12-minute walk). Not exactly close by our subjective standards, but walkable.

The Nautical is set to benefit from the development of Bukit Canberra, an integrated 12-hectare hub that combines sporting facilities with a polyclinic, healthcare, shops, restaurants, etc. There have also been general improvements to the neighbourhood, such as the re-opening of Sembawang hot springs.

One unusual quality of The Nautical is its low-rise nature. Rather than consisting of a few tall blocks, it instead consists of 17 blocks, of just five-storeys each. Some might decry the lost opportunity for better views, others will like how it doesn’t make the area feel “closed in”. Regardless, you won’t be forking out much for the top-most floor.

Most of the units are small, with three-rooms constituting the bulk; there are also dual-key units. As such, there seems to have been an intent to draw the investor crowd. If you’re thinking along these lines though, do be aware that Parc Canberra (an Executive Condominium) will be closer to the MRT station when complete, and can offer competition.

There were no transactions below $1 million for 2020 (as it was mainly the larger units that sold this year), but there were in 2019:

Today the concept of a skypark (a garden / landscaped communal area on a higher floor instead of the ground level) is quite common; but not a lot people realise it started with Waterfront Gold. This condo was the first in Singapore to incorporate a 16th floor skypark, which incorporated a mini putting-green and fitness area.

The development has done well, as the number of profitable transactions show. Waterfront Gold has benefited tremendously since Bedok Reservoir MRT station opened, just 700 metres away (eight minutes’ walk). This fixed one of the main gripes of residents, which was the lack of accessibility.

The main amenity here is Bedok Reservoir itself; this area is well known for its water sports like dragon boat races and kayaking. However, this also means the appeal is more toward the outdoorsy types – those who like living near malls, nightlife, etc., will probably find the immediate area on the dull side.

These were the most recent transactions below $1 million:

Jewel @ Buangkok was one of the top sellers in 2013, largely thanks to a huge early-bird discount. It sold out 203 of 280 released units during its initial launch weekend, at an average of just $1,150 psf.

Even though it’s in a fringe region, this was a competitive price given that Jewel is the closest residential development to Buangkok MRT station (about 220 metres, or three minutes down the road). Note that this is on the North East Line (NEL), which is a direct line to Dhoby Ghaut station.

In terms of overall amenities, there isn’t much as Sengkang is still a developing area. However, day-to-day needs are quite easily met, with plenty of convenience stores and grocers in the general area. You’ll still need to head out further for serious shopping, but having the MRT station so close should make up for it.

These formerly inaccessible areas are gradually being linked to the MRT network, even in once far-flung areas like Bedok Reservoir. This will fix one of the main concerns regarding OCR properties, which is a perceived lack of public transport (not true for every OCR condo, even a decade ago).

As such, home buyers or investors in it for the long haul can see some room for appreciation; and one that could come with much greater holding power, given the low quantum of OCR condos.

Do drop us a note if you’re considering such a property, and we can help you with a more in-depth analysis. You can also follow us on Stacked, where we provide in-depth reviews of condos across Singapore.