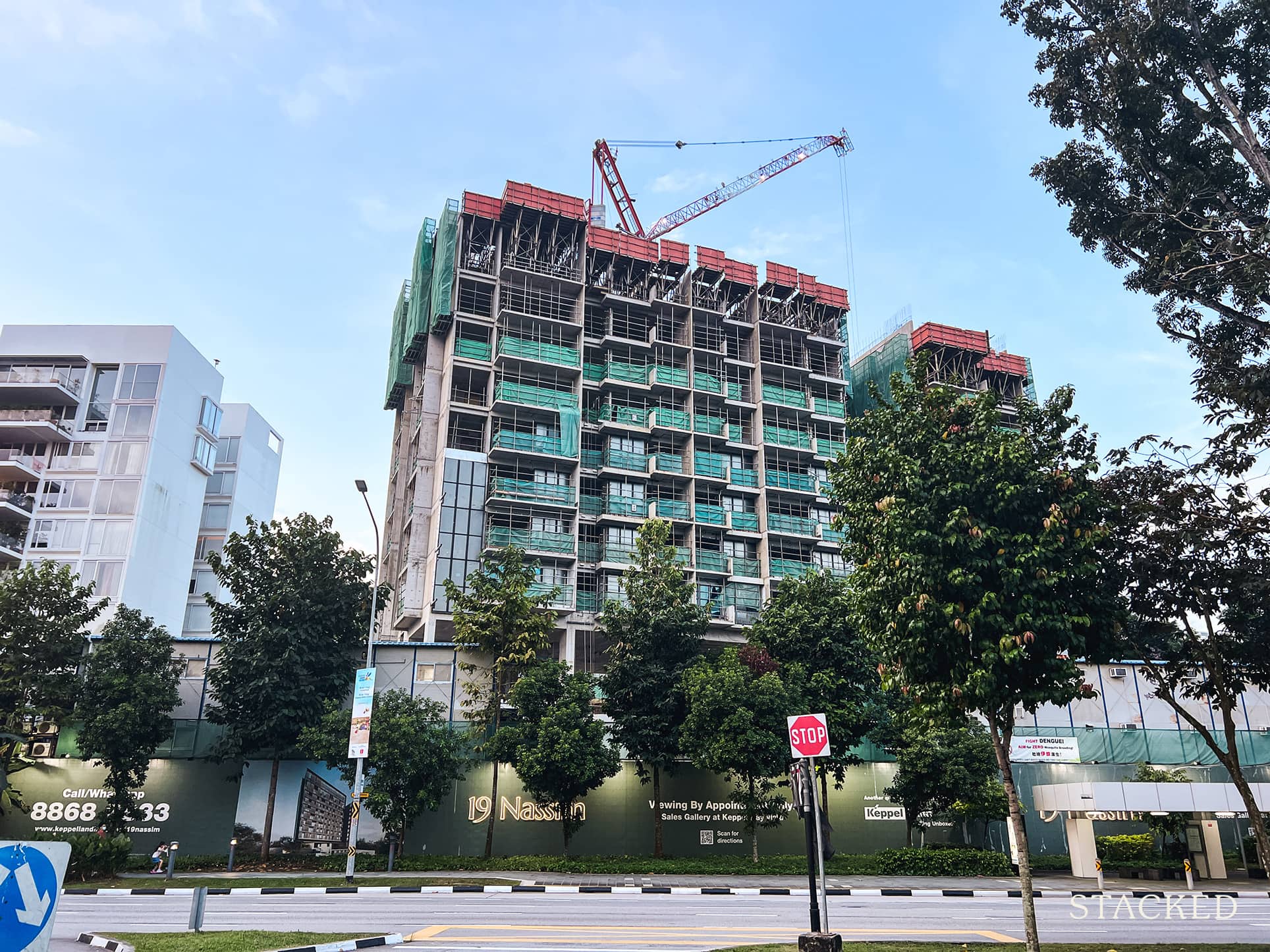 As Covid-19 was the most major event in the country (and possibly the world at the time), it’s inevitable that many of the causes below are directly or indirectly linked to the pandemic.

We’ve often said there’s no good crystal ball for the property market, but that doesn’t stop some very certain statements that keep appearing. While Covid-19 may have skewed how the market has turned out, the truth is, that Singapore’s interventionist approach (our government is quick to act on home ownership issues), along with this disruptive era in politics, makes it hard to foresee the simplest issues. Here are some predictions that, while well-grounded in their time, ended up being way off from reality:

Updated on 27 July 2022 to correct an error in the article previously.

1. Singapore has an oversupply of homes that will take “years” to clear

This prediction surfaced around late 2019. At the time, URA noted there were 31,948 vacant units waiting to be sold; and average sales were only around 2,500 units per year. This led to the prediction of a supply overhang, and the idea that it would take up to four years (i.e., 2023) just to clear the backlog.

The supply overhang was attributed to the last round of en-bloc fever in 2017, which saw record numbers of collective sales. As a result, many people were citing the multitude of new launches that would hit the market and have to compete with each other which could bring about a fall in prices.

The complete opposite happened. After the peak of the Covid-19 pandemic, there was a mad rush for new homes. The new Work From Home environment, coupled with fears of future lockdowns in the same confined spaces, drove a surge in new home purchases.

In addition, the United States Federal Reserve set record-low interest rates, to stimulate their pandemic-struck economy. This had a knock-on effect in Singapore, lowering home loan rates to around 1.3 per cent per annum in Singapore (by comparison, the HDB loan rate is 2.6 per cent).

By Q1 2022, there were only 14,087 unsold homes on the books; the lowest number since 2006. This spurred new cooling measures by December of last year, as limited supply began to ramp up prices.

Agents we spoke to said that around 10,496 new units were launched last year, but estimated total sales exceeded this (around 13,000+ units sold). Some agents estimated there are only around 14,300+ unsold units, as of Q2 this year.

At one point, there were predictions that resale flats and private home prices might fall as much as 10 per cent, after the December 2021 cooling measures. This was on the basis of tighter loan limits, as well as higher Additional Buyers Stamp Duty (ABSD) across the board.

The key factor was ABSD for developers, which rose to 35 per cent (of which 30 per cent is remissible, if the entire project is completed and sold in five years). The higher risk of development, coupled with higher taxes on foreigners, was expected to cool demand, and prevent a 2017-style en-bloc fever.

These predictions did make sense, based on what was observed during the last few rounds of cooling measures. We also thought buyers would switch to a wait-and-see attitude for a while, before adapting to the new norms.

Thanks to the limited housing supply, low-interest rate, and Covid-19, the effect of the cooling measures were only in Q1 2022, when the growth in private home prices slowed down and the volume of new and resale private homes fell.

It was a different story for HDB flats though. Not only did resale flat transactions fail to dip, but they also recorded 24-straight months of price increases; and they reached their highest price point in eight years, by the end of Q2 this year.

Since then, private home prices continue to accelerate, and recent new launches such as LIV@MB, Piccadilly Grand, and Amo Residence have all sold well.

Developers, meanwhile, continue to push for land. Even as we write this, the venerable People’s Park Complex is up for a $1.8 billion collective sale. The simple fact is that – ABSD or no – developers need land to build on. And while higher ABSD rates pose a higher risk, the underlying demand seems strong enough that developers can remain confident.

We’ll also point out that the rental market is at a peak (see point 3), which means developers are confident in both home-buyer as well as investor interest.

That said, this one still has some time to play out – so we’d perhaps judge this one in 2 years time.

3. Covid-19 will be bad for the rental market

Even we thought this was common sense, when we heard the prediction: Covid-19 would be terrible for rental rates, as there would be fewer foreign workers with all the border restrictions. Everything about this seemed logical: Singapore’s rental market is such that the majority are foreign workers – and as companies cut housing allowances, and travel became restricted, landlords should be the first to suffer.

This seemed to begin in April 2021, when rental rates were reported to show a slight dip.

By December 2021, Singapore saw its highest rental rates in six years. In an ironic twist, Covid-19 helped rather than hindered landlords.

First, some foreign workers – such as those in Malaysia – found themselves compelled to rent or extend their leases. This was due to factors such as Movement Control Orders in Malaysia, as well as the fear that they couldn’t return if they went home. In places like Woodlands, this drove rental demand up by 20 per cent.

Next, the construction and renovation delays caused by Covid-19 supported rental demand. Leasing volume rose, as now locals, as well as foreigners, started to rush for accommodations. You have to stay somewhere while your new home is being built; and that means many HDB upgraders also found a need for rental units.

At present, rents have continued to climb, thanks to the return of foreign workers after Covid. By happy coincidence for landlords, the time of their return coincides with lower housing supply (see point 1), and many of the properties delayed by Covid-issues have yet to be completed. Bloomberg has already reported rental rate increases of 20 to 40 per cent, for some central region tenants.

4. Interest rate predictions, which were wrong on two counts

Around 2018, analysts warned of rising interest rates. At the time, interest rates had been low for around a decade. The Fed had previously dropped the rate to zero during the Global Financial Crisis in ‘08/’09; and it was predicted they couldn’t maintain such a rate for much longer, due to the risk of runaway inflation.

The reasoning was correct, and it would lead to runaway inflation (more on that in a minute). But the prediction was a series of 0.25 per cent rate hikes, to “normalise” the rate by end-2018 or 2019.

Singaporean home buyers were warned not to over-leverage, to consider longer fixed-rate periods, and to be wary of using bank instead of HDB loans.

How this prediction went wrong the first time:

The interest rate was rising…until Covid-19 struck. By around 2019, the Fed had once again dropped interest rates to near-zero. Home buyers who had taken pricier fixed rates grumbled, and there were complaints about how HDB flat buyers had now paid higher interest rates than condo buyers, for well over 10 years.

It was then assumed that interest rates would stay low for a long time more to come, so the economy could recover from Covid.

How this prediction went wrong the second time:

Remember how we mentioned that prolonged periods of low interest rates can raise inflation?

That’s one prediction that did pan out, as US inflation hit a 40-year high of 8.6 per cent. The Fed then went into overdrive, implementing three rate hikes, and threatening even more if necessary, to rein in inflation.

By around May, the prediction was for Singapore’s mortgage rates to roughly double over the next six months. While this hasn’t happened yet, we have seen rates rising. At present, most floating rates average 1.65 per cent for the first three years, as opposed to 1.3 per cent previously.

Note that this prediction may prove wrong again, if the Fed cuts rates due to the energy crisis from the Ukraine – Russia war.

We mentioned the sheer number of flats reaching MOP a while back. With around 50,000 resale flats reaching MOP in 2020/21, this was expected to exert some downward pressure on prices. This seemed to make sense, as higher supply should – as a matter of economics – lower the price.

This was also used as a sales spiel in many seminars and showrooms, as property agents warned that it was time to upgrade: you didn’t want to wait for the deluge of available flats to lower your prices.

How it actually panned out:

Resale flat prices reached an all-time high, as we mentioned above. While more resale flats entered the market, the numbers proved barely sufficient to absorb the tidal wave of demand following Covid.

On top of this, the age of the flats played a decisive role. Many of the flats that reached their MOP were only five years old – this made them highly desirable to buyers. The lease decay is negligible, everything is quite new (you may not even have to renovate to move in), and waiting for a BTO flat had become less viable (due to Covid delays).

As such, the high prices of these “young” resale flats pulled up the average, setting records as mentioned above.

All of this just shows how difficult it is to predict property prices. Singapore has a dynamic real estate market, and there are too many moving parts to make accurate predictions. Calculated guesses are all we have; and for home buyers, it’s best to follow the old rule that time in the market beats timing the market.

Base your buying decision on the state of your own finances, rather than what you think the market will do next. Follow us on Stacked, to check out new and resale properties that can comfortably fit your budget.