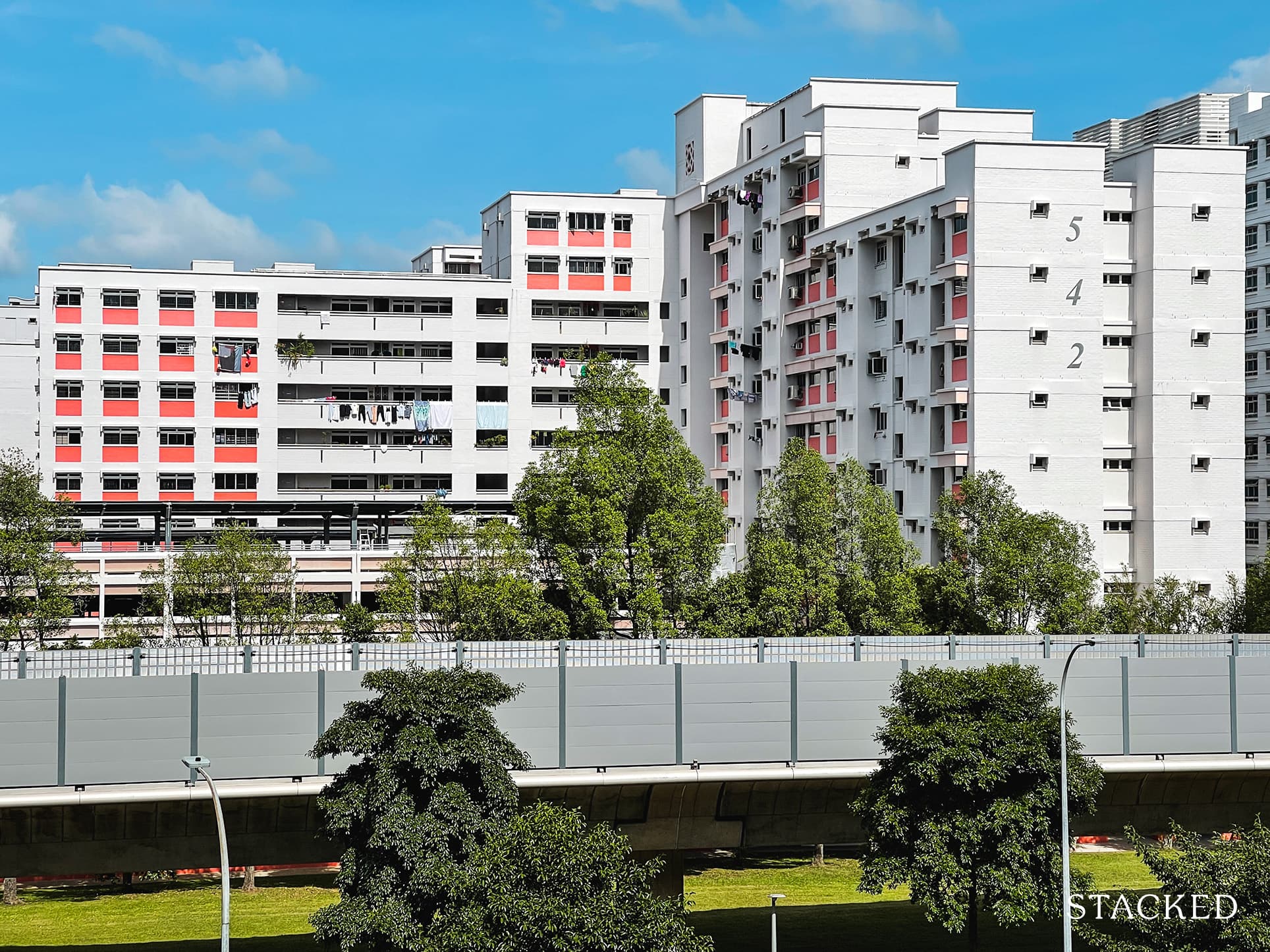 Despite borders opening up around the world, the past 2 years of the pandemic have still taught many that having enough space at home is a luxury worth paying for. While many of us would be having to head back to the office, there are some that will still be enjoying WFH status, or at the very least, a more flexible working arrangement such that looking for the biggest home for your buck makes sense.

As such, here are the top 5 specific areas from the past year of transaction data (April 2021 – 2022) that showcase the cheapest but the most spacious HDB units available:

Named Blue Riverview because the estate runs alongside the Sungei Sembawang, this HDB was built in 2001 (so it is 21 years of age right now).

And while being next to the river is a definite plus, we do have to caution you that this isn’t exactly like Hougang Capeview, where the views of the water are pretty open. Lining the sides of the Sungei Sembawang is a thick mass of green, so you’d want to aim for a higher floor here should you want some views.

Other than that, you are about a 10-minute walk away from Sembawang MRT station. The most prominent mall (Sun Plaza) is in the vicinity as well so it’s certainly not too far away. There is a Giant Express within the estate, and a Food centre close by, so amenities are within easy reach.

One of the biggest advantages of this area is that you are bordering Stagmont Park. It’s a decent-sized one, with playgrounds, exercise equipment, and a basketball court. Blocks 763, 764, 767, and 771 have an advantage of the unblocked park views as well.

Besides getting your daily exercise at the park, you can also head across the road to the Choa Chu Kang Swimming Complex and Sports Hall. Going by the closeby Choa Chu Kang North Park Connector can take you to Limbang Shopping Centre and market, as well as towards the Pang Sua Park Connector – where it’s a much more scenic walk along the canal.

In terms of transport, Yew Tee MRT station is just about an 8-minute walk away, and there are other amenities to be found there too, such as YewTee Point and Yew Tee Market. For other malls, Lot One will be just under a 10-minute drive away.

On the school front, Kranji Primary and Yew Tee Primary School are within a close walk, as will Regent Secondary School.

Nanyang Emerald is the oldest apartment on this list. It was built in 1988, and so is currently 34 years of age.

If you are a family on the lookout for schools, you are sandwiched between Xingnan Primary, and Juying Primary and Secondary School as well. The massive Nanyang Technological University is located across the PIE so you could be covered nearly all the way in terms of schools.

Beyond schools, the other positive of the area is that you can walk to Yunnan Garden via the overhead bridge across the PIE. It’s quite a beautiful new garden, with nice landscaping and ponds to gaze wistfully across the water (there’s even a 5-metre man-made waterfall).

But schools and parks aside, there’s really nothing much else to be positive about the location. While you do have several eateries nearby, a Boon Supermarket and Prime Supermarket, Pioneer MRT station is too far of a walk at 17-minutes away. Your best bet for a shopping mall is probably Jurong Point, at under a 10-minute drive.

You do have Nanyang Community Club nearby though, with a food court, KFC, and Subway to boot. 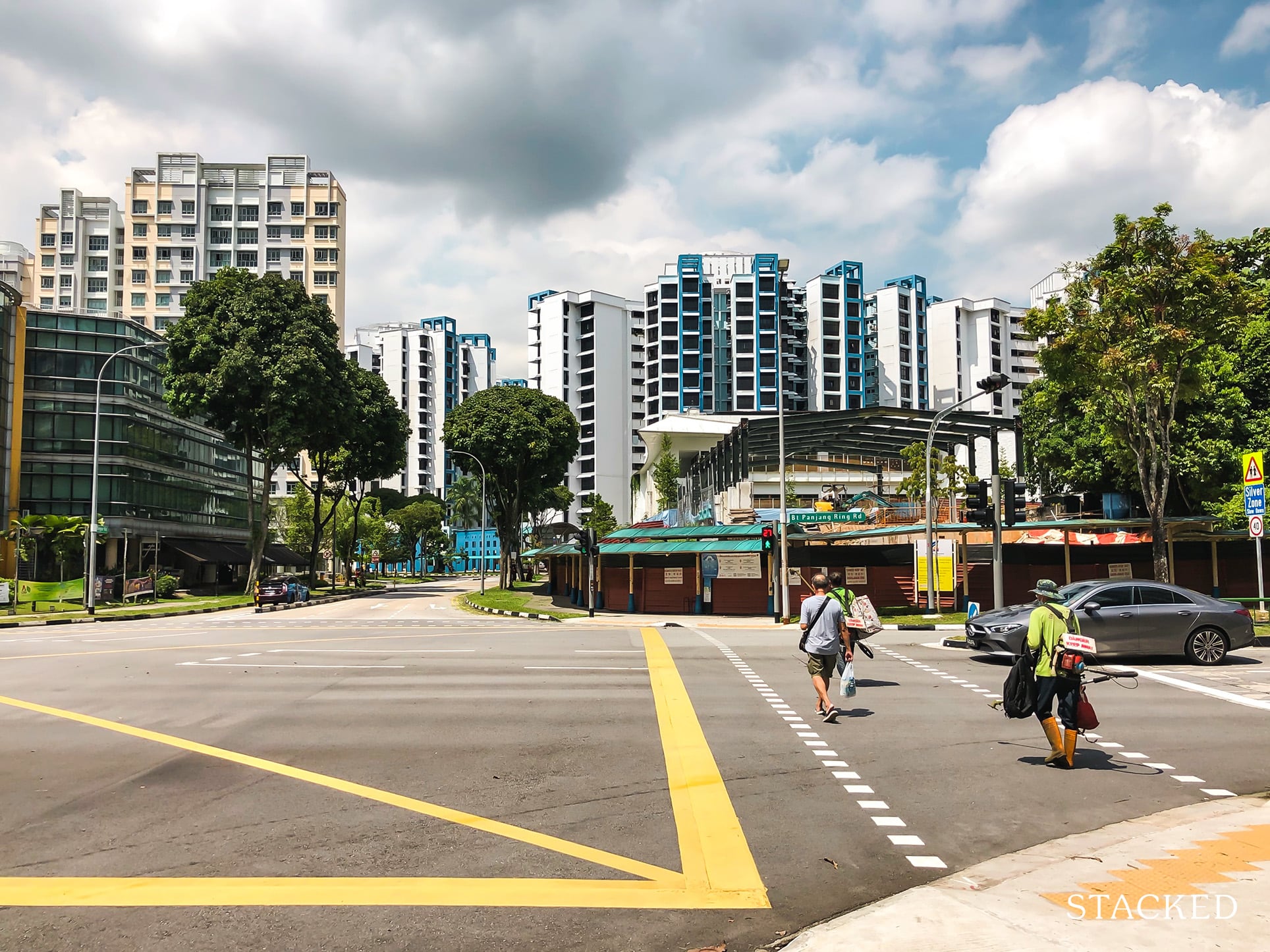 224 Pasir Ris Street 21 received a fresh coat of paint not too long ago, with the new neutral grey colour a lot more pleasing to the eye than the previous light blue. It was built in 1993 so it currently has a good 70 years left of lease remaining.

Immediately, you’d find Sea Shell Park just across the road. It’s not the biggest of parks, but it does have a slight elevation which makes the landscape a little different, along with a playground for kids (and apparently mango trees).

Within walking distance is a Giant supermarket, and a whole array of neighbourhood shops (hardware stores, bakeries, and the like), as well as various eateries and Block 441 Pasir Ris Market.

White Sands and Pasir Ris MRT station will require you to drive (about 8-minutes), and there will be further upgrades to the area when Pasir Ris 8 and Pasir Ris mall are up sometime in 2025.

You do also have a whole host of schools around the area (Pasir Ris Primary, Pasir Ris Crest Secondary, Casuarina Primary, White Sands Primary, and Loyang View Secondary), so families with school-going children will be quite pleased to see that.

Currently though, Pasir Ris MRT is a 23-minute walk away so you’d just have to wait for the future Pasir Ris East station on the Cross Island Line. The station will be situated along Pasir Ris Drive outside the Pasir Ris NPC (which is really nearby), so there’s some future upside here.

This estate here was built in 1995, so it currently has about 72 years of lease remaining.

You’d probably be happy with Limbang Shopping Centre (and wet market) at your doorstep. There’s an NTUC Fairprice here, a food centre, small shops, as well as a Mcdonald’s.

We think the best part about the location is that it faces the restricted area of Kranji Camp, but it’s just a green patch to you so you get a good unblocked view. You can also walk to Limbang Park, where there is a playground with multiple slides, a basketball and a street soccer court.

For more curated options, follow us on Stacked. We provide you with the latest news and insights on the Singapore property market, both HDB and private.