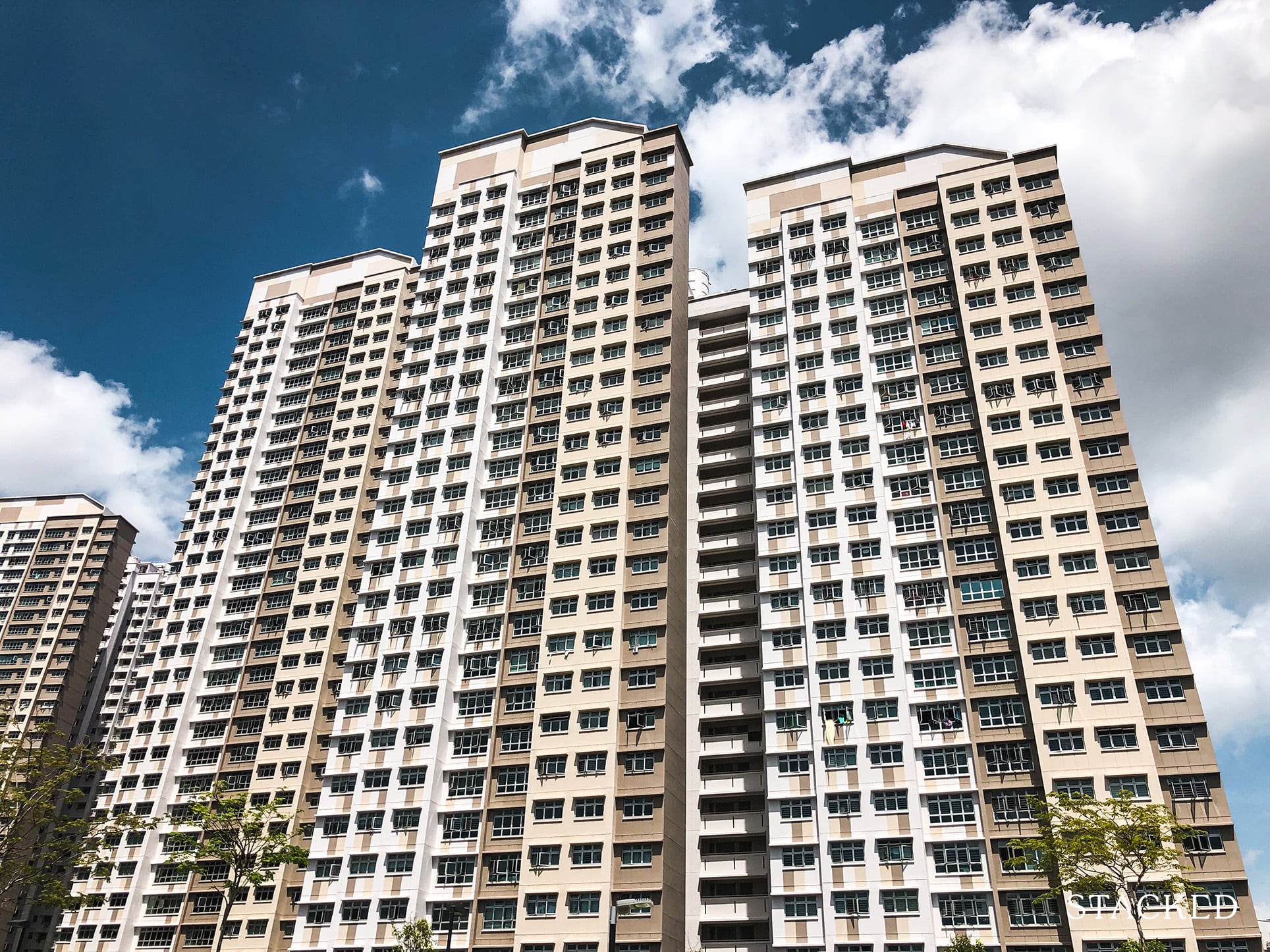 The resale flat market is booming in 2022, with prices rising for 19 consecutive months as of end-January. But just because there’s a surge in demand, that doesn’t mean every buyer will settle for any old flat (and neither should you!) With a record number of HDB flats reaching their MOP in 2022, you should have a good range to pick from. As such, the following are a list of almost five-year-old flats, which could reach their MOP this year. For those of you who don’t want a unit that’s too old, but are still on a budget, we’ve narrowed down some of these places.

These are among the most desirable resale flats on the market. A five-year-old flat is the newest that you can get aside from waiting for a BTO; but it’s still ready to move in, and avoiding construction delay is a big plus during Covid-19. In fact, some of these flats are so new, that many or all of the renovations don’t need to be redone; a bit of maintenance work may be all that’s required.

That said, buyers do have to brace for confident sellers, who are more likely to push for Cash Over Valuation (COV). This is a combination of sellers knowing the value of their newer flats because of current demand (if they don’t, their property agent will tell them), and of many such sellers looking at asset progression.

Those who sell right after five years were probably aiming at upgrading to a condo anyway, so you can be sure they’ll push for higher prices. Many need to, as private home prices are at a peak.

Out of the many BTO flats that will MOP in 2022, we’ve gathered and broken down (by flat type) those that will be more affordably priced:

*Important point: Do note that due to a lack of transactions from these soon-to-MOP flats, we decided to sort the table from cheapest to most expensive based on the 2021 average resale flat prices for the closest (and newest) comparisons possible in the area – these are flats with leases that start from 2013 onwards.

We know Canberra is considered “ulu” and not the most glamorous area currently; but we think it warrants a second look, especially in a market when resale flats are all priced high.

Some of the Canberra flats (EastBrook, EastCrown, and EastLace) benefit a good deal from changes to the neighbourhood. These flats are roughly a six-minute drive from Bukit Canberra, for example, and you can cycle there in about eight minutes.

Bukit Canberra is a 12-hectare sports hub, but also doubles as a retail hub with clinics and eateries (including a 700-seater hawker centre).  While these flats aren’t the closest to an MRT station, we do think a quantum below $160,000 for 3-rooms is a value buy – especially with Canberra being a fast-developing area.

Overall, note that next to Woodlands, Canberra has among the cheapest “new” resale flats you can buy.

Also of note are flats in the Punggol Waterway area, such as Waterway View. 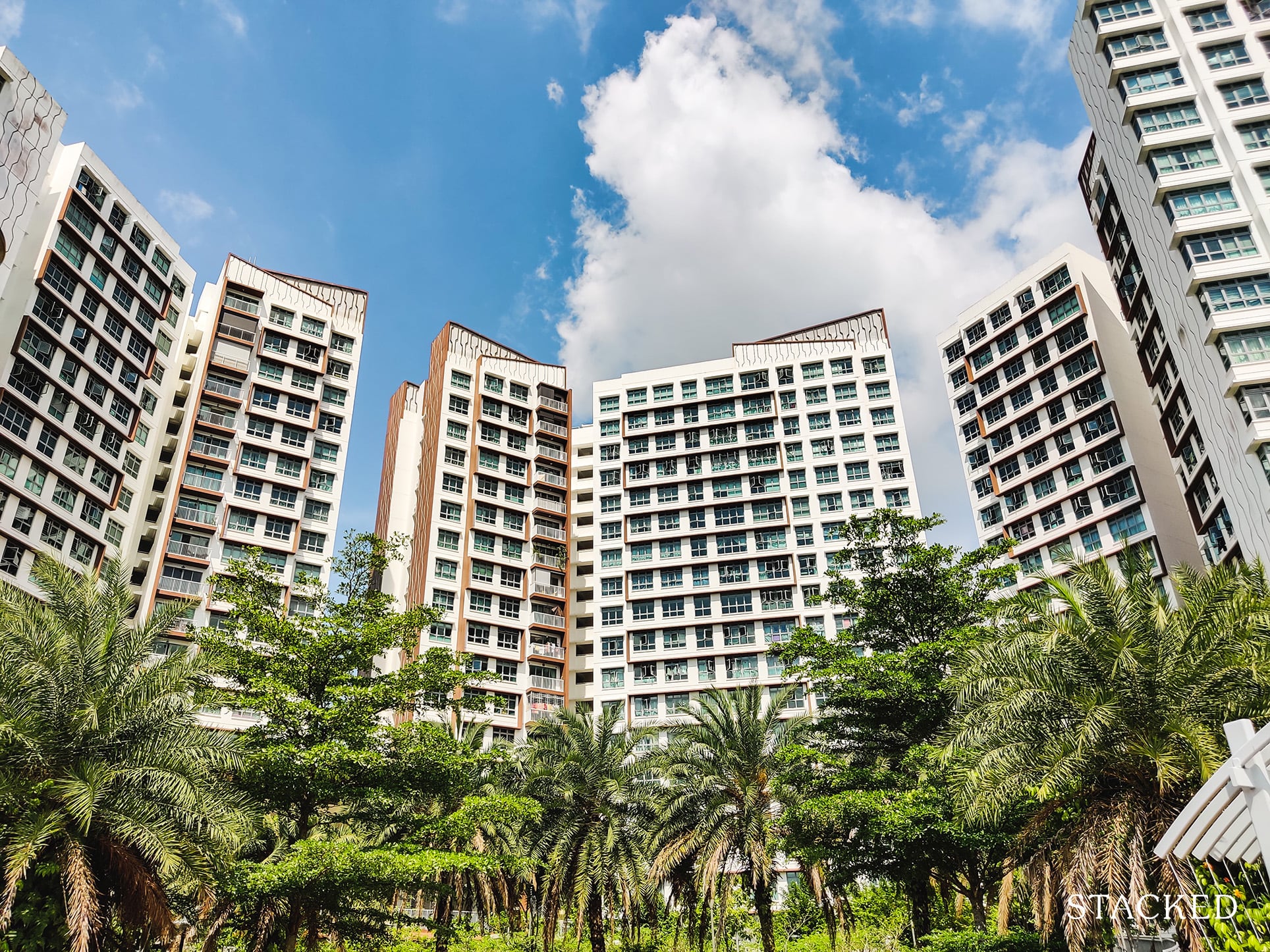 With regard to Waterway View, for instance, there’s no MRT nearby – but LRT stations like Oasis are a walkable distance, and some may not mind needing the LRT to connect to the wider network.

The opening of Waterway Point – about a seven-minute drive away from some of these flats – also adds retail and dining amenities. Punggol is becoming more of a lifestyle hub every year, and it’s an especially great family location right now. Even the 3-room flats here are starting to push past $200,000, and we’d be surprised if it doesn’t keep rising.

Woodlands is another highlight, due to the upcoming Northern Agri-tech and Food Corridor. This is part of Woodland’s transformation into a regional hub. URA’s plan will bring retail, office spaces, and educational institutes into the area, creating a new commercial node outside of the CBD.

The flats here are about a six-to-seven-minute drive to the development zones, so residents have a lot to look forward to in the near future. Besides this, the flats are about the same distance to Republic Polytechnic, in case you have children going there.

Woodlands Pasture flats also have four schools that are conveniently nearby:

With Woodlands shaping up to be a regional centre, anyone eyeing this location should consider making their move, before prices rise once everything gets more built up.

For more on the resale flat market in 2022, follow us on Stacked. We’ll update you as we continue to spot good deals, and ways around the rising prices. And if you’re also considering an upgrade to private properties, check out our reviews of new and resale homes alike.

most of these soon-to-be MOP flats have some early sale prices that have transaction prices well beyond the average prices cited in this article. Is the author trying to suppress the resale prices of these new estates simply by listing the median BTO listed prices and then comparing it with the averages of the flats in the same estate? Is it even a fair comparison, comparing apples and oranges? I gathered my research and see that the author has just simply calculated the median BTO sale price, list it here and compare it with the prevailing resale prices. May I… Read more »

by the way, if the author has done his due diligence, he would be cognizant that edgeview does not have 3 room flats

Hi Eddie, thanks for your concern regarding the article. With regards to the 3-room flat, this is a mistake on our part as the project was launched in tandem with Buangkok Square and we mistook the 3-room flat prices there for this project too. We’ll rectify this. In considering the non-mature resale flat prices, we have used resale flats within the estate that is less than 10 years old as a guiding price which are the cheapest ones that buyers can look into. Our guide here is by no means a definitive measure of what the prices will be, but… Read more »