Buying 11 Useful Tips To Check Out Before Buying An Old Condo: A Comprehensive Checklist 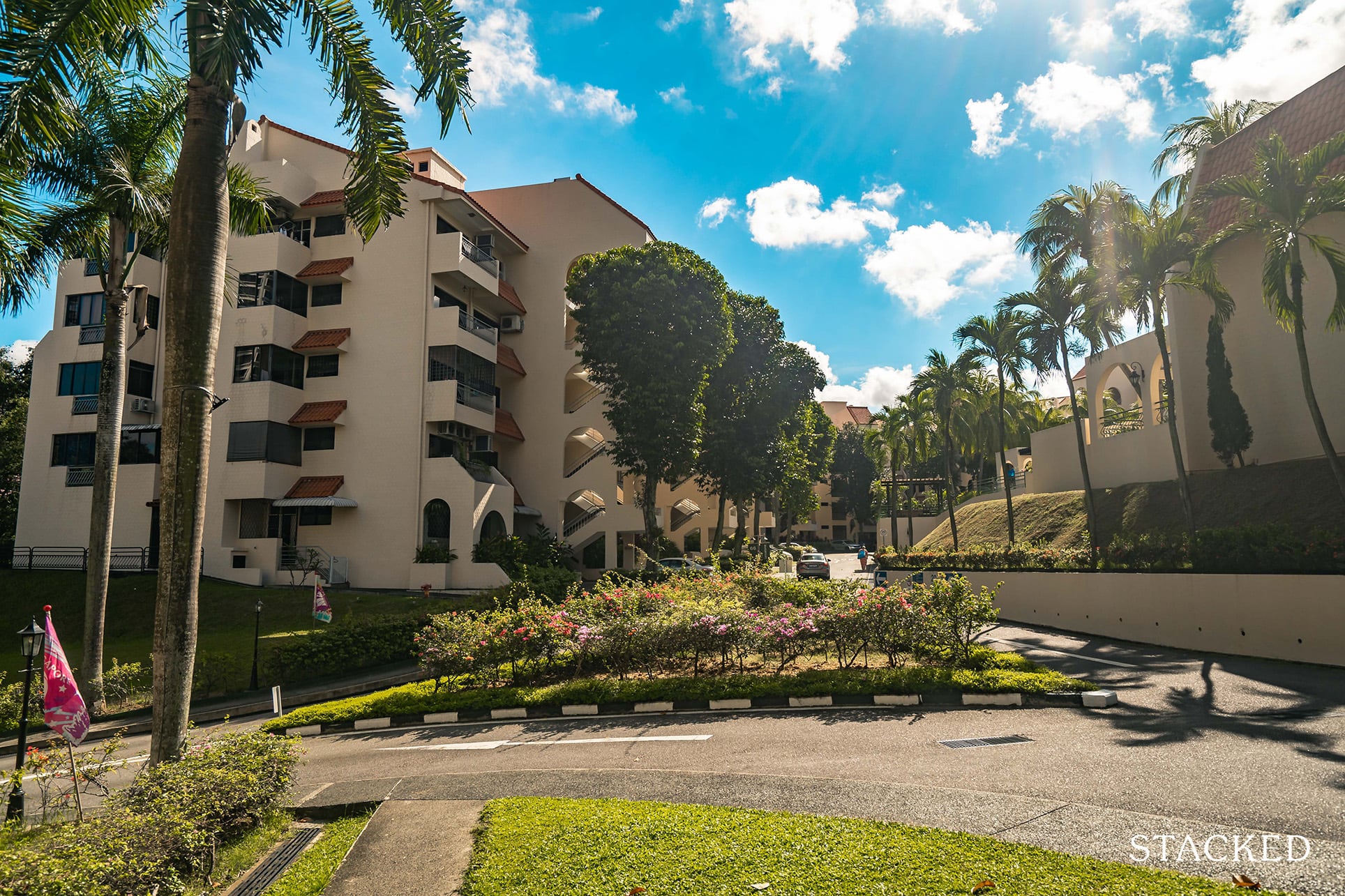 As of 2023, new launches averaging $2,000 psf have priced out a great many home buyers; even HDB upgraders. And although the pandemic seems to be behind us (fingers crossed), the demand for bigger homes has still continued unabated. The eventual conclusion: an older resale condo, where you can still find homes with a bigger floor plate, as well as bigger grounds.

But just as with buying a new launch, buying older developments comes with its own set of risks. Besides the obvious ones like maintenance issues, you’d want to consider the long-term prospects of the development – particularly if you are buying it as your retirement home. Here’s a checklist of things to look out for when buying an old resale condo:

1. Check for en-bloc attempts in the project, and the area around the project

This is one of the first things to look out for, because the worst nightmare is usually the condo going en-bloc after you’ve moved in and renovated. If the last en-bloc attempt was nearly successful, you might want to look elsewhere. We have heard of cases where because of the SSD and renovation costs, the en-bloc proceeds were just marginally enough to cover – which isn’t worth the trouble and stress of having to look for another home.

Also check for en-bloc attempts nearby, such as another old condo across the street. Old projects tend to cluster together (though not always).

There are two reasons:

First, nearby redevelopment can expose you to a few years of noise and air pollution. No matter how careful the builders are, you’re bound to experience some of this when it’s just across the road.

Second, redevelopment usually means that whatever comes next will be bigger and taller; and it can possibly block your view.

2. Check out the lifts

If you can, look at the lift logs, or ask people living in the block about the elevator. In older condos, especially those about to go en-bloc, management will not bother to replace ageing elevators.

This can result in a higher frequency of breakdowns; and it would be preferable that the block has at least two or three lifts. Also, if it gets to the point where management is finally forced to get new lifts after a long time, it may cause the maintenance fee to spike.

3. Walk from the car park to the unit

This is to see which parts of the trip are exposed. Just like what we wrote in the regrets from buyers of older condos, these sometimes don’t have underground car parks; and there may not be sheltered walkways leading to the car park either.

If it’s exposed, remember it can be troublesome to get to your car in heavy rain; and if you forget to keep an umbrella in the boot, you may just have to spend additional time in the car to wait it out or brave the rain to get home. Besides the rain, getting into a hot car during a sweltering day isn’t fun either, and those who are fussy about the upkeep of their car may not like getting their car exposed to the elements all day.

4. If you have children, check the condition of the playground equipment

Run your hands along metal surfaces like monkey bars, to check for rust. Older condos, especially those with few children, sometimes let the playground get run down – and that can lead to some rusty surfaces.

Also, check for the playground surface – older condos may not have the same rubbery material you’ll find in newer condos, or the surface may not have been cleaned in a long time.

5. Check the actual living space and versatility of the layout

Most older condos have enclosed kitchens, so keep in mind you’ll probably need to hack a wall if you want a newer, open-kitchen concept.

Older layouts also tend to include more in the way of corridors or hallways; and some may include an antechamber-type space (a small holding area just in front of the living room, usually for shoe racks and umbrellas). These may not be very efficient, compared to newer dumbbell layouts.

Note that the actual living space (e.g., living room, bedroom, and so forth) can sometimes be less than a unit with higher square footage; this is due to space being taken up by balconies, planter boxes, or hallways. But this is less likely an issue for very old condos, as planter boxes and bay windows weren’t in fashion at that point.

6. Check for leaks, which may be coming from the units above

Look out for bulging paint in the ceiling (that’s usually caused by water accumulating under it), or for discoloured streaks on walls or floors. These are more common in older projects, and are problematic because fixing them means coordinating with your neighbours.

Your contractor may have to go into your neighbour’s unit, for example, to rectify the leak – and condo management may be less than helpful in arranging matters.

7. Flush the toilets a few times, and check that the water goes down the sink properly

In older properties, you may find the water pressure is unusually weak when you flush, or that it takes a long time before you can flush again. This could be indicative of leaks or problems with the plumbing, which you may not see right away.

Likewise, when you run the faucets for a while, make sure a lot of water doesn’t accumulate in the sink. That’s also an indication of choked pipes or other plumbing issues.

Note that these issues are not always fixable, even if you call a plumber. Sometimes it’s due to ageing infrastructure that affects the whole project; so it’s vitally important to check before you buy.

8. Check out whether the side-gates are still viable

This could mean you need to walk all the way to the front of the condo to get in or out, and it can affect which stack you choose.

Also, check if the gate is properly secure, as some older condos don’t really bother to lock it up.

9. Take note of which facilities are actually useful

Older condos tend to have squash courts, which future buyers may dislike. No offence to squash players, but the hard truth is that fewer people play squash these days; and the courts still take up space and add to maintenance fees. Some condos have taken the liberty to place a gym or table tennis table instead, which makes the space more usable to a wider group of people.

Besides this, older condos may have some facilities that are shut down permanently. The most common one is the sauna, but you may also find some parts of the clubhouse, playground, or landscaped areas to be roped off. One example would be Parc Oasis, which has a very unique golf driving range (something that only older condos can have the space to offer) being closed off for a while now.

For gyms, do inspect them to see if they’re still reasonably equipped. Older condos sometimes have a lot of broken machines, missing free weights, etc. We did once run into a project where the air-conditioner at the gym often leaked and had to be switched off; and this can’t have been pleasant for the users.

10. Get a sense of the overall resident make-up

If most of the residents are tenants, for example, this makes the older condo much more prone to an en-bloc sale. As the owners aren’t living in the actual units, they’re probably more interested in selling (and that may be their entire intent).

On the flip side, a condo where most residents are owners – and are older folks – is tougher to en-bloc. The owners are probably not willing to bear the convenience of moving, waiting for the sale proceeds, getting loans for a new home, etc.

The unit count also plays a part here, as condos with more units tend to be harder to en-bloc. Older condos, however, tend to have smaller unit counts compared to newer ones.

Try to avoid condos where the bulk of units are owned by a single family or corporate body. They will tend to dominate general meetings and control the whole direction of the property. This is what happened to the ex-owners of Gillman Heights, where NUS owned 46.86 per cent of the development.

11. Ask when the last renovations were done

If renovations were more than ten years ago – and chances are high that they are – you should be prepared to spend a bit more. You’ll probably have to hack away the existing renovations, so keep in mind this could make up for the lower cost of an old unit.

In general, we would prefer units that have been renovated in the past five years when it comes to older projects. This is because the more glaring issues, such as old power sockets that don’t work, sagging doors, etc. would likely have been corrected at the time.

If you’re still uncertain or spot red flags, reach out to us at Stacked. We also provide reviews of some older resale condos, so check them out as it may be one you’re considering. You can also check out our various lists of older and larger condos.